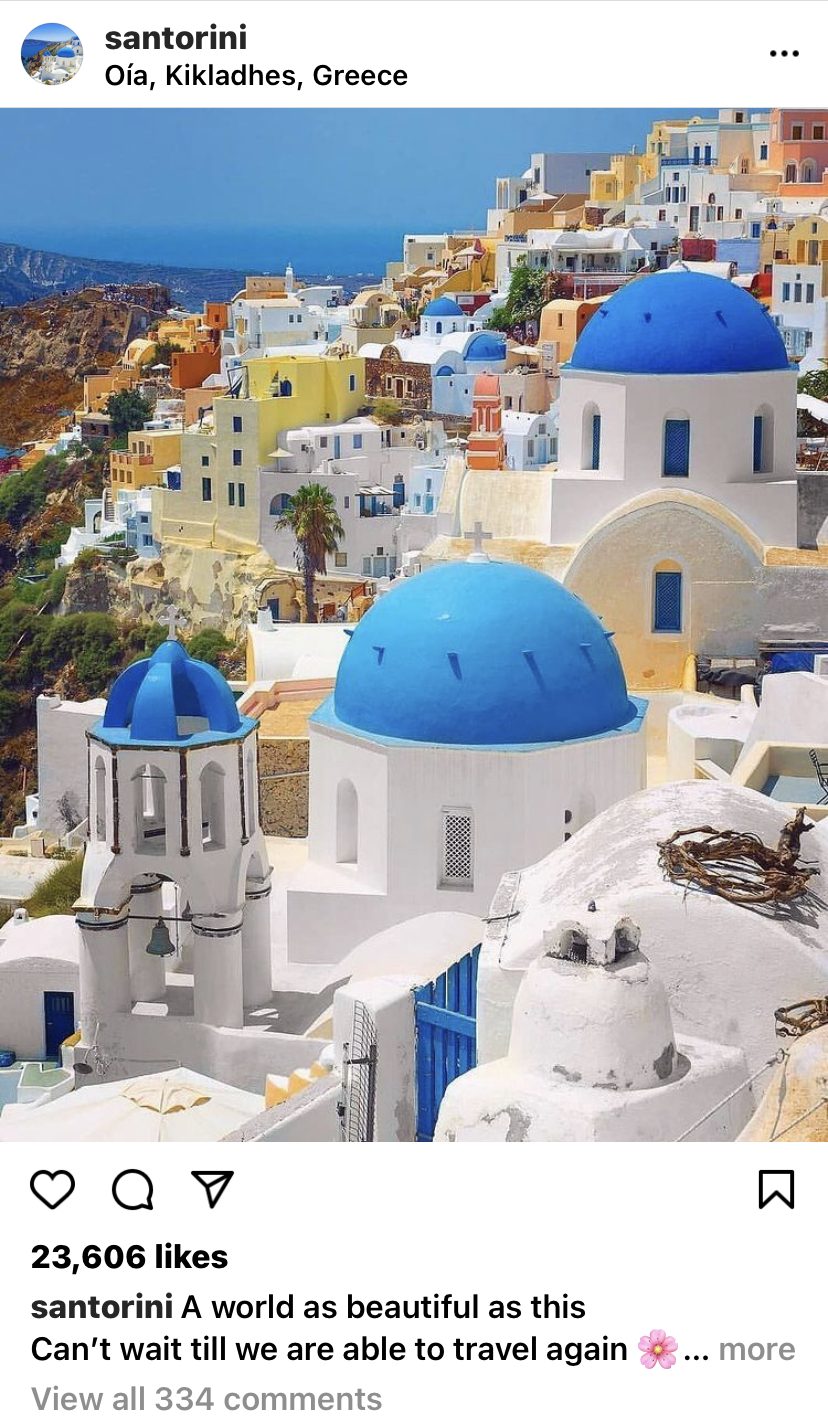 Two years ago, back when people went places and Instagram feeds were full of all sorts of FOMO inducing images, Santorini, Greece with its blue domed buildings and even bluer sea was a favorite summertime spot for people to dish out a good dose of “weather is great, I’m here and you’re not” posts.

I used to say to my daughters If I see one more picture of Santorini I am going to scream. Is everyone in the world in Santorini but us? Of course, not true. But it felt that way.

I have never been to Greece.  Though I cannot complain about my passport stamps.  But Greece is on my bucket list.  And Santorini does photograph really well.

Those photos did exactly what they were supposed to do.  They made you a bit envious that you too were not eating freshly caught langoustine, drinking crisp white wine and wandering the beaches in a pareo and little else.

They reminded you that you were in fact a victim of FOMO – fear of missing out.

What a difference  eighteen months makes, now we have a new FOMO, only I call it FOMOOS.  Fear of missing out on shots.

I thought I was the only one who cringed every time I looked at my Instagram feed and saw one more person smirking with a needle in their arm.  “Shot number one!!!!!!!!!”

Or perhaps a close up shot of their Moderna receipt. With the caption, “Second shot done, life here I come.”

But there was an article in the Washington Post yesterday backing up my mixed emotions.  It’s called “To Selfie or Not to Selfie, Why the Joy of Getting Vaccinated is Drawing a Backlash.”

I suddenly didn’t feel so alone.  I had been meaning to write this blog for a few weeks, but I thought people would be put off. How selfish could I be? But the emotions are very contorted. And I am clearly not the only one feeling them.

I feel both envious and guilty for feeling envious.  I don’t want anyone else to get sick or die. I’ve lost twenty people now to this disease. Some relatives.

I don’t want anyone not to get a shot.

But I want to get one too and it doesn’t look like that is going to happen anytime soon.

I have been a champion of others getting shots. With the help of my friend Rose, who taught me how to navigate the beyond complicated online sign ups, I was able to get Glenn his shots.

Rose has a degree from The London School of Economics, so maybe that is the level of intelligence and education it takes to figure out how to book a shot. But one night she called and said, I heard they are releasing several thousand appointments tomorrow. Get on two sites now. Two  different computers.

So, Taylor and I each grabbed a laptop and we got Glenn, who is 65, and a legitimate candidate an appointment for Dodger Stadium a week later.

I not only made it possible for him to get an appointment. I drove him there, I sat in the car for 4 hours with him.

We made the appointment for the end of the day as we have all heard by now, the one chance someone has of getting a shot that is not being taken from someone who is in the right group is to nab a jab of the day’s leftovers.

So, we pulled up to get him his shot ten minutes before the sight was going to close down, except there were about five hundred cars in back of us.  Before his shot, we nicely asked if there was any extra lying around. They said, ” no.”  Then Glenn, who really went above and beyond the call of husbandly duty, asked the shooter if I could have his shot,  as I have asthma.  She said absolutely not. They were going by CDC rules and only 65 and up and only with appointments. So, he got his first shot and off we went.

One of use with antibodies slowly multiplying in their system. The other ordering more N95 masks.

The system is screwed  up beyond belief.  I could go into why, but why bother?

It’s a huge country and you can’t lump people into the categories they are. Some are good and some are completely nuts.  In New Jersey smokers are in the top tier. ??????????

The point I want to make is, if you got a shot, I am genuinely happy for you.

Truly.  And I have a few good friends who have tried to help me get a shot. Not breaking any rules or pushing ahead and elbowing others out.

Just helping a little dog looking for some scrap of Pfizer at day’s end.

Many people do not help others. They post their photos and go on their merry immunized way.

And that is OK, but you really need to stop and think about something. Most people, sensible people want a shot, and they want it now. They want it so much it makes them a nervous wreck at the end of several years of totally frazzled nerves and fears of death.  And most people are  far from getting any relief.

So, every time you post a photo of yourself, it just pisses them off that they are being shut out by a very broken system. And that broken system has resulted in over five hundred thousand deaths and they are predicting more tough months ahead.  The unvaccinated just want a shot at not dying.

They want you vaccinated, and they want to be vaccinated so they can see you.

But posting a photo of yourself getting vaccinated is like doing a slide show of your trip to Santorini at a homeless shelter. 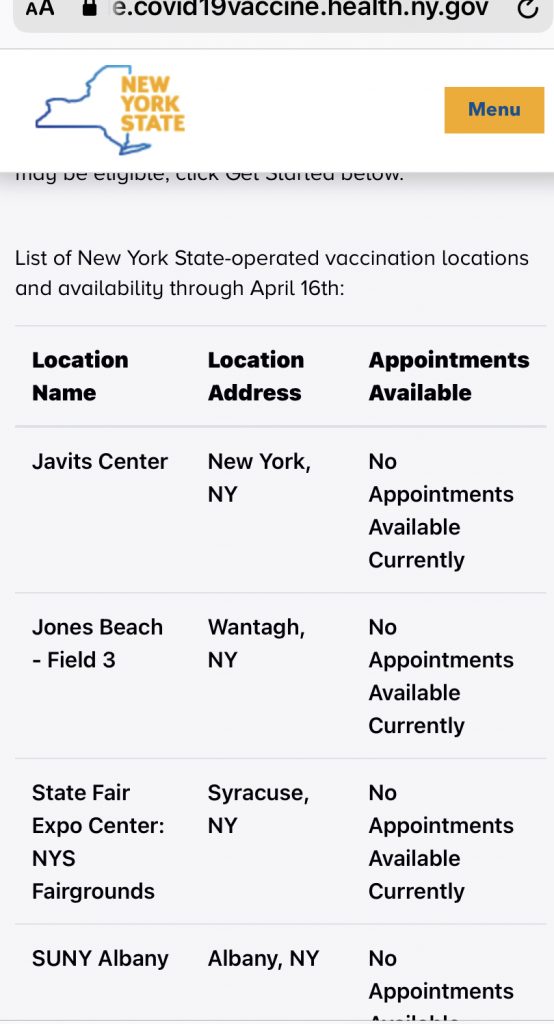