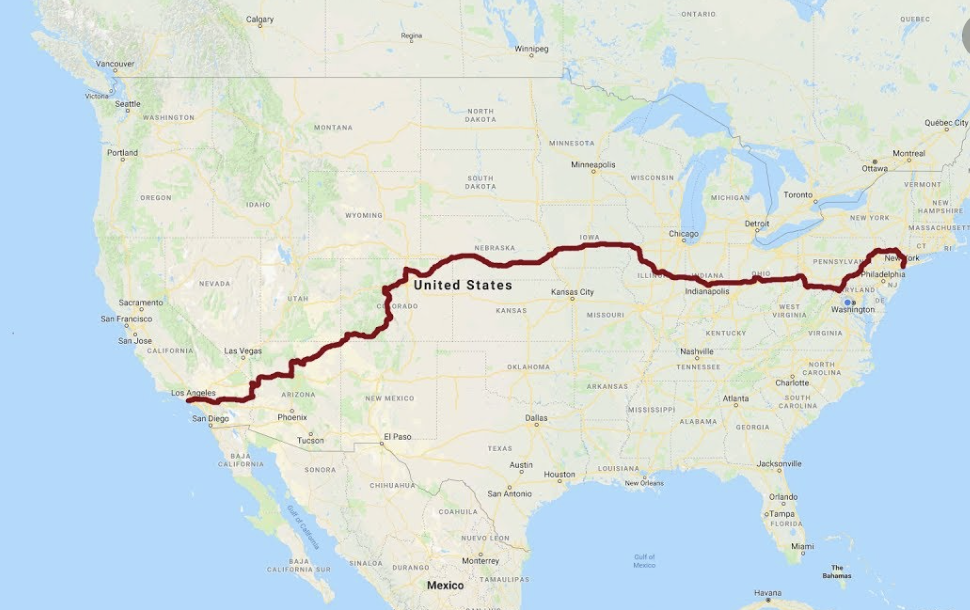 It’s been a little over a month since we decamped from New York City to LA.

At the time we left, New York was on its way down from the COVID capital of America and the world.

LA was holding steady at a low level of cases, especially considering the size of the State.

What a difference a month makes. Now, New Yorkers are being set free and here in LA, we are back in quasi-lockdown.

I would have written sooner if I actually thought anything I did or had to say was relevant or interesting enough to share.

Everything in the world is so high octane and the stakes are so high, the death, destruction, job losses, crime upticks, endless food lines, lack of testing, the fact the country is worse off today than it was in March,  makes my life seem inconsequential; even to me.

New Yorkers, of which I still count myself as one, might say they are better off as their disease load is the lowest in the country.  But the crime is soaring.

I can’t even imagine people might want to know how our “experiment” is going.

Honestly, I don’t even know if one can call it an experiment.

On June 12th Glenn, Lucy and I flew across the country with our three dogs. That alone is mind-boggling. Forget it was in a pandemic.

Many people ask me what was it like to fly?  Many people are still more afraid of planes than of say – Disney World.

Flying did not feel scary.  It only felt scary because people kept telling me how scary it must feel.

I Cloraxed the seats. We wore hoodies, goggles masks and latex gloves.

I had Wally with me, and he was an angel. ANGEL!

He wore his little Emotional Support vest. And when they told me to take him off his leash and let him follow me through the metal detector, he did it. Just trotted through like he’d done it a hundred times.

And when they took me aside to look through my luggage he sat at my feet, no leash, or harness or anything. Just sat there and with all the commotion going on, it was truly impressive.

He then slept at my feet for the entire plane ride and never made a peep.  Winnie needed Lindsey Lohan amounts of Xanax to make it through the five-hour flight.

But Wally was a huge deal for me as now he is my official traveling companion.  I will still travel with my family, but Wally is now an on the road dude. That is if I ever go anywhere again.

So, we got to a basically empty house that we had never seen before to start a version of a new life.

Taylor blessedly had arranged for the TVs to be installed and the mattresses were on the floor.  We could cook a bit and our things arrived on schedule four days after we did.

In true me fashion I had us unpacked and the place pretty much set up in days.  How we pulled this off in the middle of the pandemic I have no idea. Wait, it wasn’t the middle, we might not even be in the middle yet.  I keep forgetting.

But a special shout out to my friend of decades, the designer Jack Lowrance who helped me with so many things. From sharing his housekeeper to a lamp repair person, a picture hanger. Honestly, without Jack’s generosity, I don’t think it would have worked out as well as it did.

So, here we are in LA.   But, I’m not sure it even feels like I’m in LA. It’s another boarded up, for the most part, locked-down American city under seige.

Some things are open. Fewer today than Monday when Newson decided back under, we go.

Sitting outside at Urth Café all appearing to be breathing on each other at tables that did not look anywhere near six feet apart.

It’s no surprise California COVID is spiking.  While most people wear masks,  the social distancing is not looking too impressive.

And we are living pretty much as we did in NYC. A big day is a trip to what has quickly become Lucy’s favorite market, Bristol Farms.  We go twice a week.  In the beginning, we made many trips to Koontz, one of the last great hardware stores.  I discovered the most wonderful nursery called Rolling Greens.  This has become a haven for me. I can go there and buy green things and it’s mostly outside and feels safe.

We have seen one friend, our friend Bruce.

So, LA, Chicago, Miami, I’m not sure that with the way we are living,  it would matter where we lived at this point.  I will say up until this week, it was a lot better than New York City.

Here at least we have more space and can be outdoors.   I can drive around and listen to The Daily podcast and get ice coffee at a place three miles away as opposed to a place three blocks away.

And that my friends, has become the thing I really look forward to; driving and getting ice coffee and listening to my favorite podcast somewhere other than the house.

Though we lucked out with the house we rented.  It’s airy,  full of light and it opens to a tropical pool area.

Glenn and I each have an office that also serves as our individual gyms. Though three mornings a week I work out on Zoom with my old teachers Liz and Fred at their new CoreBarreFit.  The only remnant of my former life. And I so look forward to it.

Glenn tends to conduct most of his business from two chairs by the pool.   He’s actually taken to the work from home by a pool life quite well.

I on the other hand sit at my same desk, only it’s in another room 3000 miles away from where it was a month ago.

I can’t work by a pool. I can’t work outdoors. I can only work indoors. With my door closed. In total silence.

I however love to drive and he does not care for it much.  So, the car we leased for him sits in the garage most of the time.

He does drive on Wednesdays, to get his weekly cigars. Round trip it’s about a three-mile trek.

I took him to the car wash the other day, another big treat for me – car wash day.  He hated it.  I won’t let them do the inside, so I ride through in the car. Something I  have gotten a kick out of since I was a kid.

And when I took him to the market, he thought the line to get in was too long, so we went home.

Suffice to say Glenn is pretty much home all the time.  If you want him, he’s in his chair. Kind of like Archie Bunker goes to LA. But in all fairness, Archie did not work from his chair, and Glenn continues to work very hard.

I drive up to Santa Barbara once a week to see my mother and father.

In terms of what coast we prefer, there is no way to know yet. Of course, there is and of course, I know.  We do prefer the East in the absolute.

But the absolute life is now ruled by the pandemic and for the pandemic, this is just perfect.

As Glenn says every day when he puts on his shorts and heads to his pool office, “if you’ve got to be in quarantine this is as good a place as any.”

When the world opens, if the world opens, my guess is he will return to wearing a suit and an office that is not made of water. Though California will likely be a winter thing for us. We are getting to that age where you go to the warmth for the winter.

But I’m not even sure of that. I spend insane amounts of time trying to figure out where I want to be in the future.  For someone who is supposed to know about living in the moment, I have a hard time doing it when it comes to home these days.

When I was in NYC, I was constantly online looking at houses out here.  Now I’m here I look at places in NY.

But I think it’s a function of just wanting my life back. A version of my life.  A version of freedom. A version of who I was. I want the freedom to make choices other than what I buy for dinner.

But that is what we all want. And I know that thus far we are lucky just to be alive and for the moment disease-free. And every day no matter how bleak things may seem, I remind myself of that. 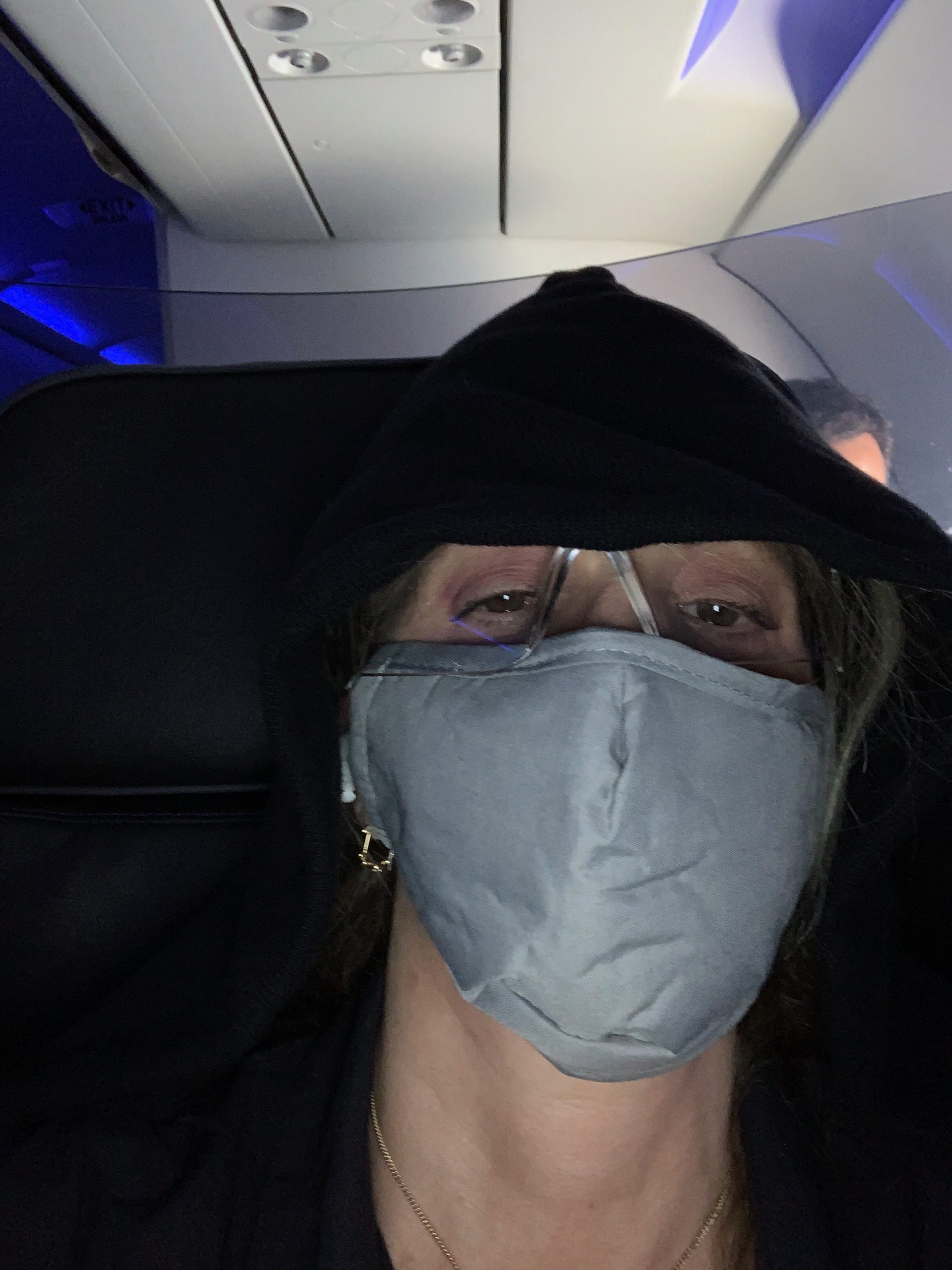 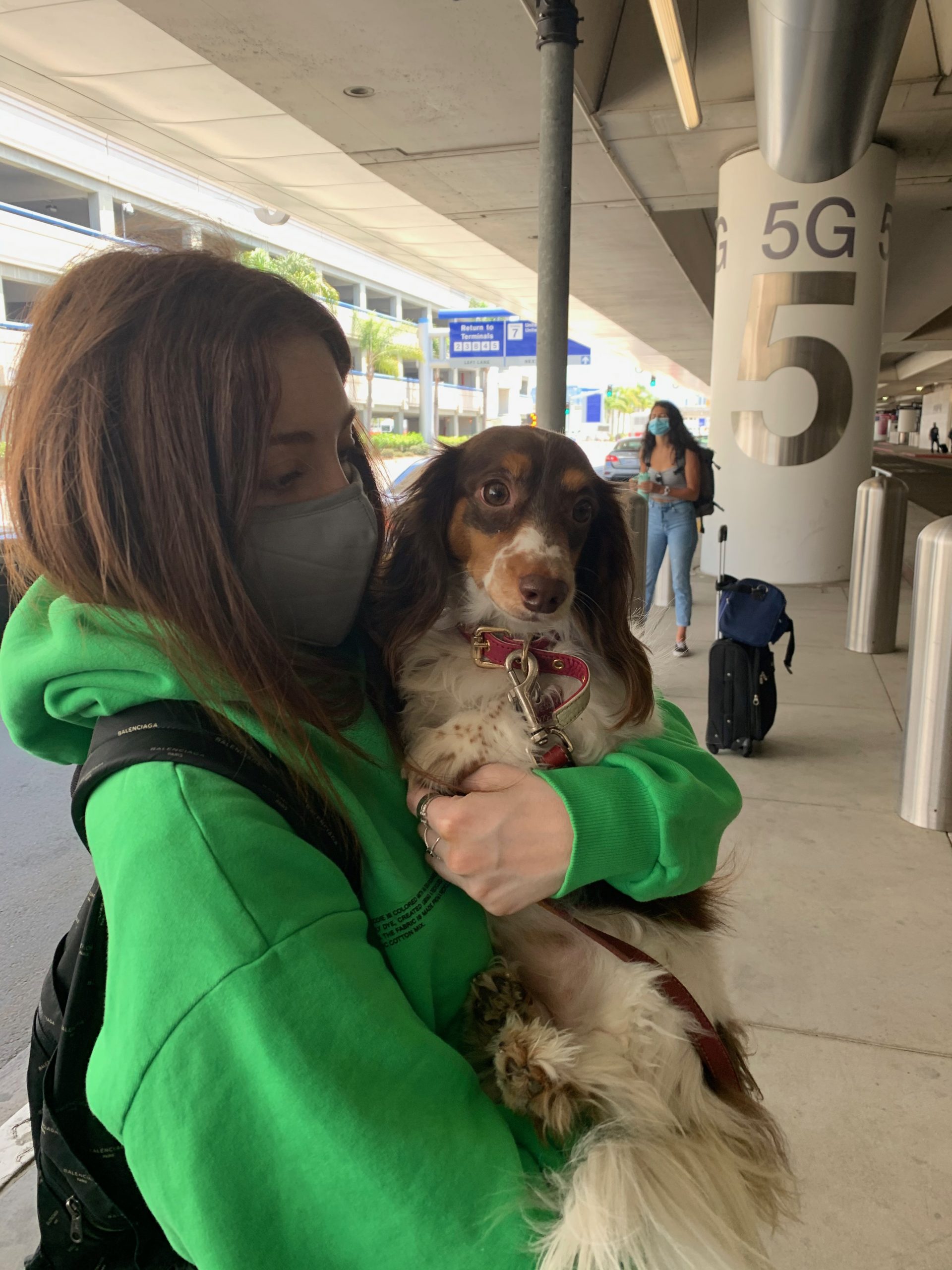 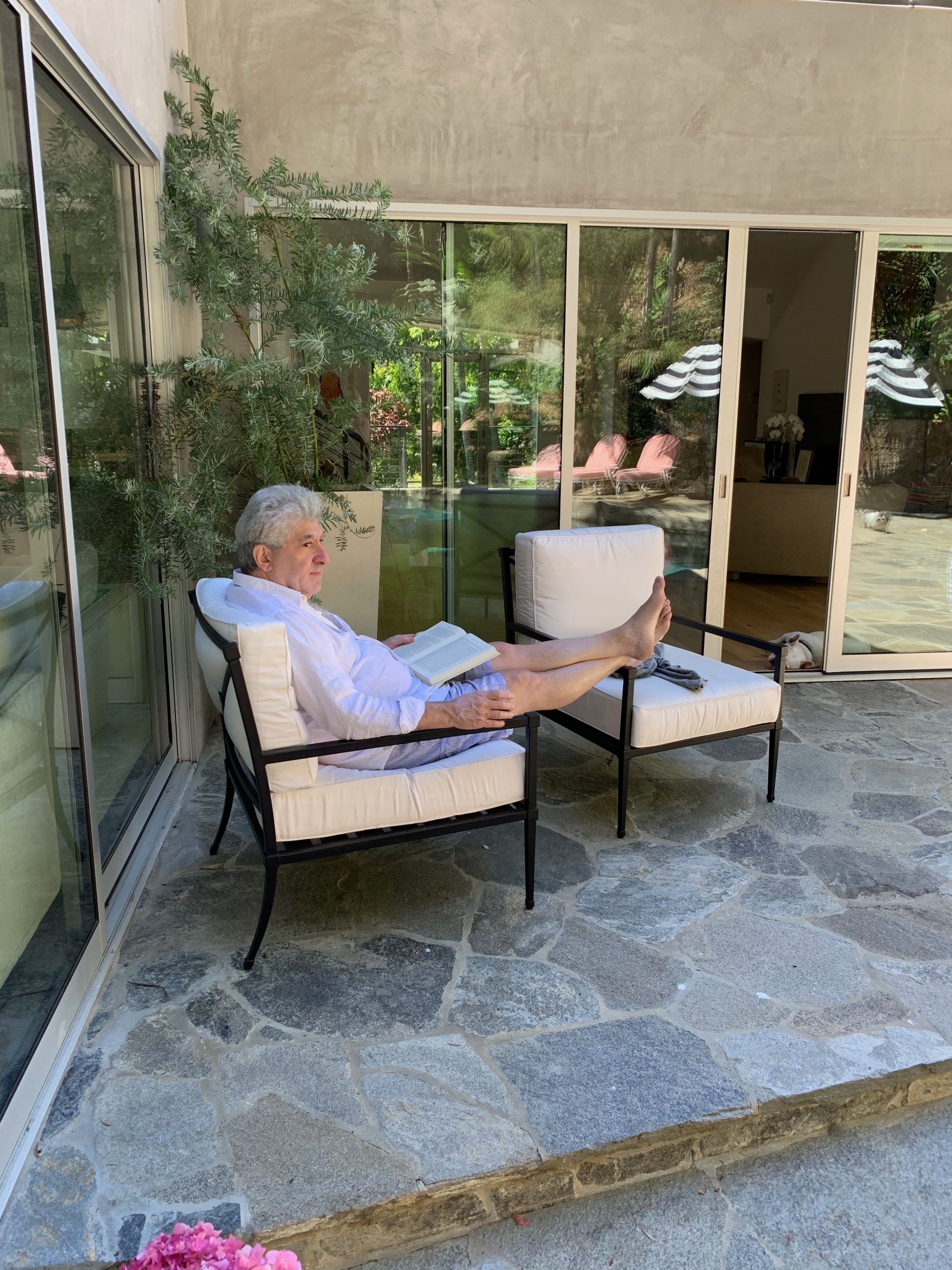 A day at the office. 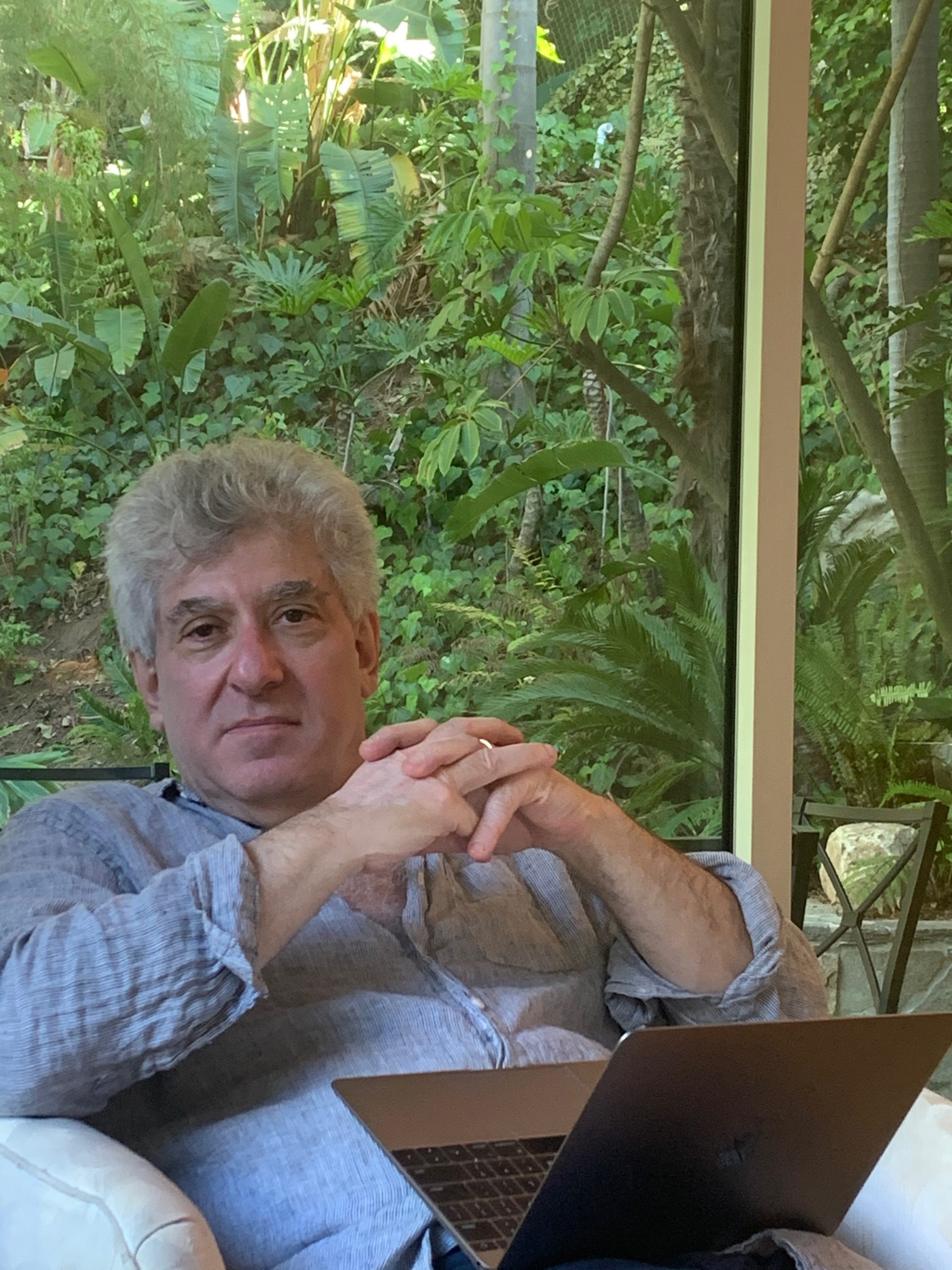 Taking a meeting.  This work from home isn’t so bad after all. 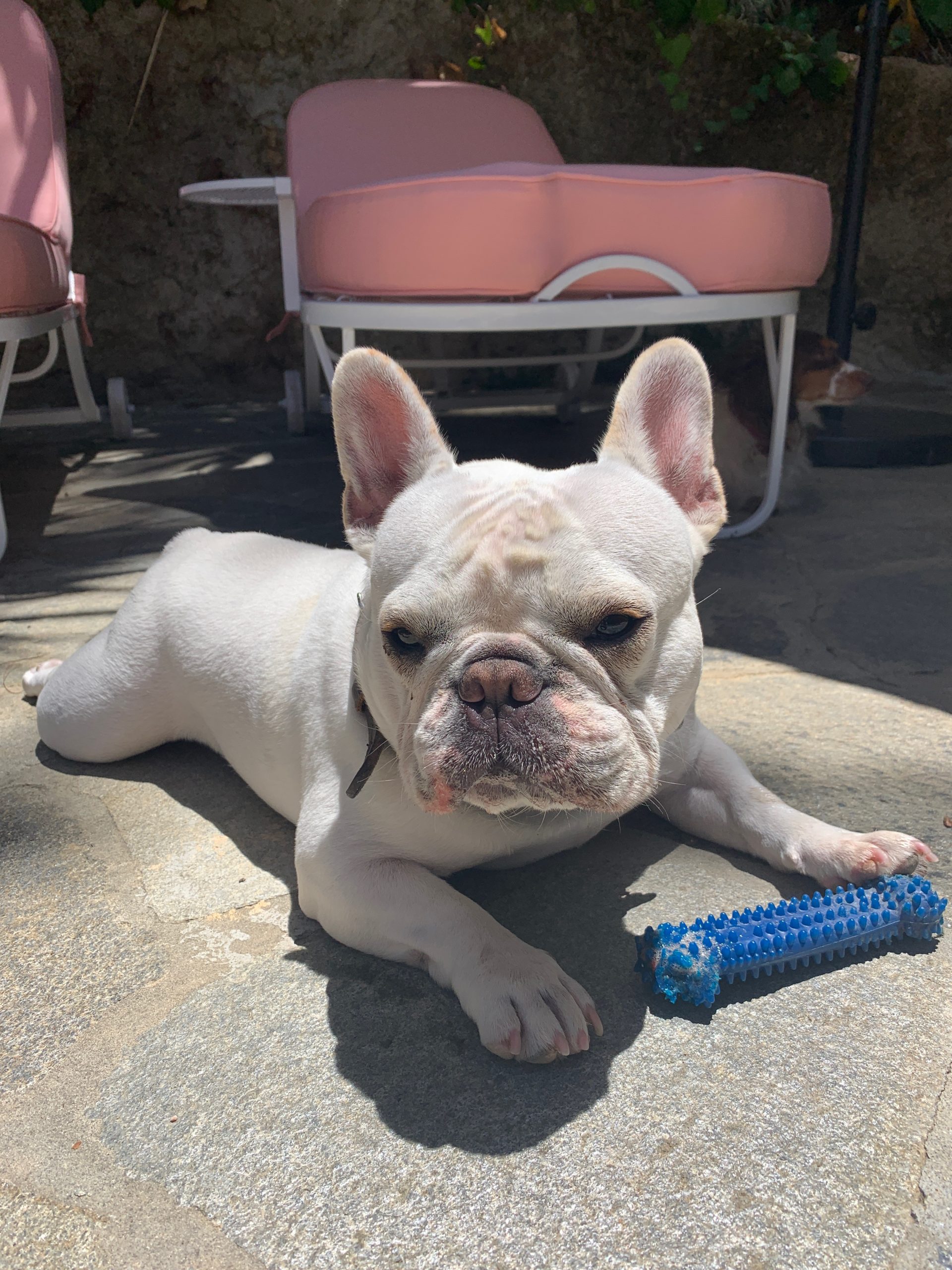 Seems like the men in the family hang by the pool a lot. 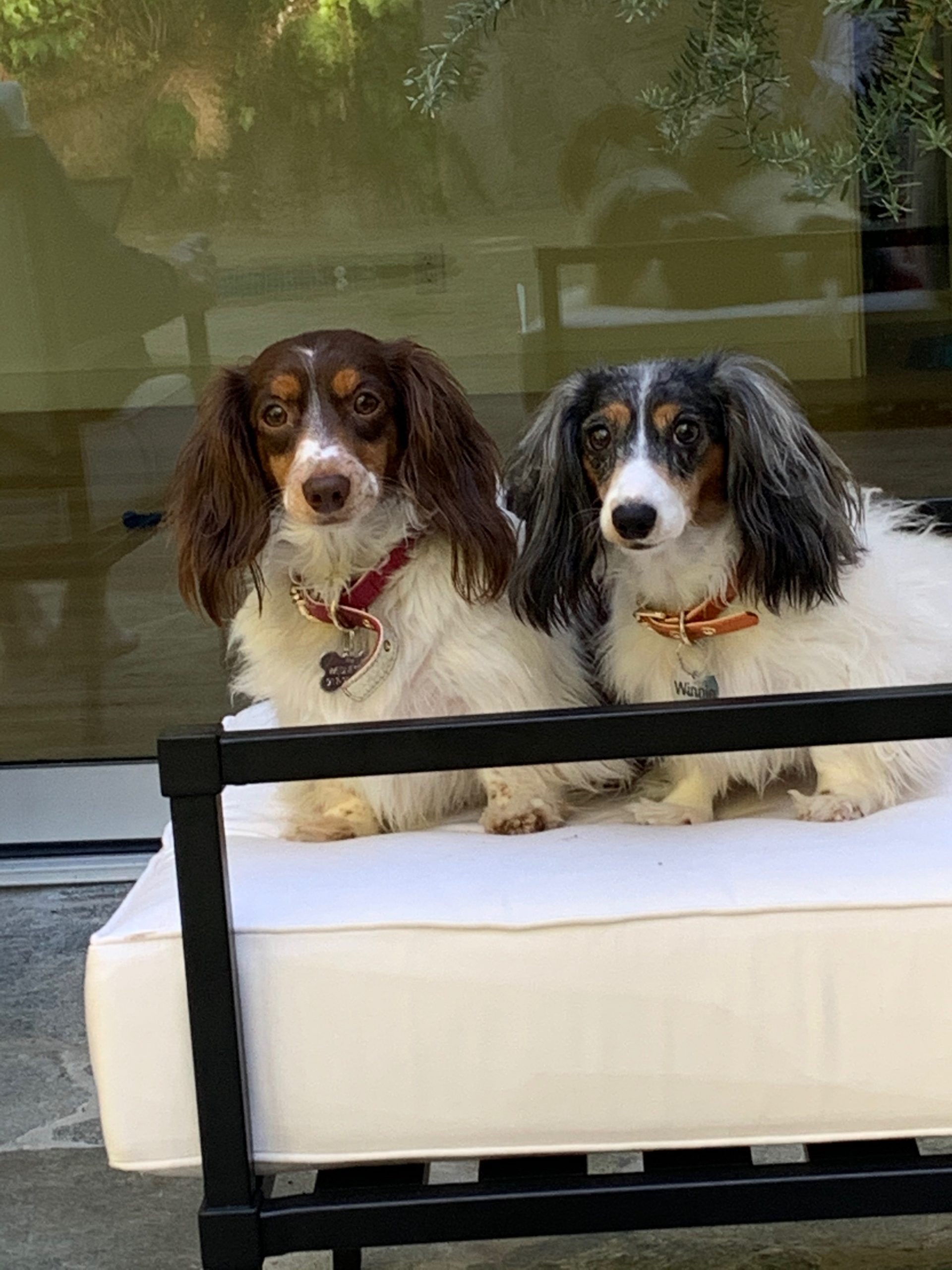 They wish they all could be California dachshunds. 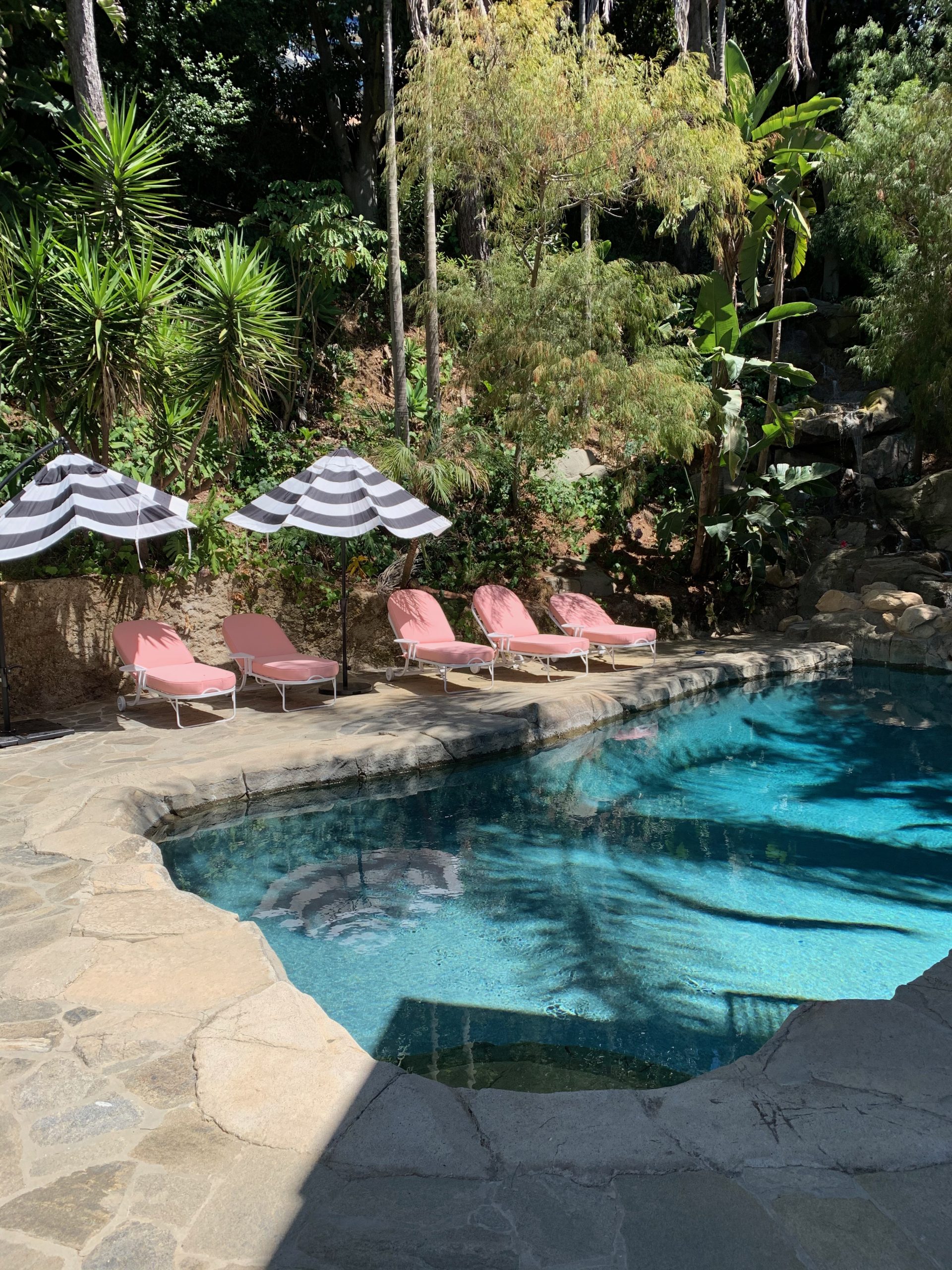 Lucy wants people to know it was her idea for me to get pink chaises.  I say it was a joint decision.

They came from a hotel in Palm Springs from the sixties. I got them from Harvey’s On Beverly 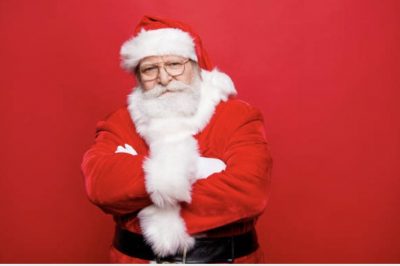