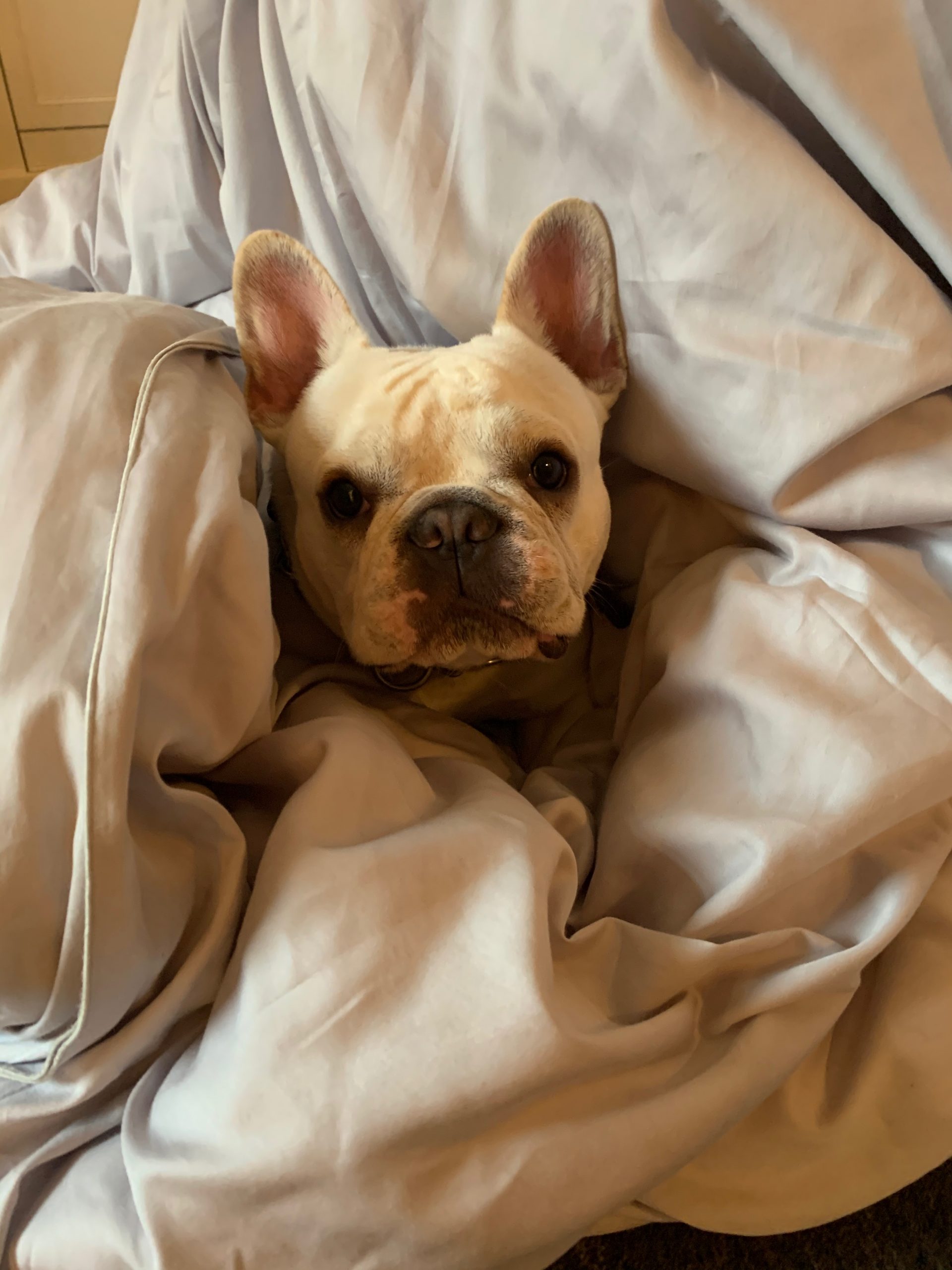 What Ever Happened To Wally?

Every day someone asks me, “Whatever  happened with Wally?”

In the Spring, I wrote a long blog about the problems we were facing with our French Bull Dog Wally.

Life was spent on the see-saw of: today we are giving him away, it’s all too much, oh he really does have a great heart, we must get him over this hump. It is a hump, isn’t it?  It’s just a life passage, the angry first year.

Then, right back to—no, no, no, this will never work.

We tried it all.  He went to boot camp.  It didn’t work.  Note: never send your dog to Rick Saunders.

Wally was not in good shape when he returned and Rick did not follow through on subsequent lessons.  I had lists of things to do, but was never instructed how to implement them.

Common sense and many people said to re-home him.  But something inside just could not pull that trigger.

If I gave up on Wally, I was giving up on me.  It had been a tough year already — I had lost a lot of faith in my own abilities. My own relevance in the world and my family.  If I abandoned all hope of Wally claiming his higher self, I would essentially be doing the same thing to myself.  Or so I felt.

And as happens in life, a woman appeared.  She knows a lot about dogs. She trains them herself.  She was on disability and couldn’t take a job, but had been watching the Wally saga from the sidelines.  She told me that Gratitude and Trust helped her so much that she wanted to do something for me.

She knew Rick’s methods wouldn’t work.  That Wally needed something else.  And when he got back and things were getting worse, she took him for me. Free of charge.  She just wanted to see if she could turn him around.

He spent two separate two week stretches with her.  And she worked her magic.  Plus, she gave me a set of daily paces to put him through. She didn’t blame me for his misbehaviors the way Rick had.  With her help, we were doing OK.

He wasn’t as aggressive.  We would go long periods of time without any outbursts.  I thought we turned a corner.

However, she was not as convinced.  She had a plan B.  If we couldn’t handle him, she would re-home him.

On very difficult days, I would ask that Wally find himself the only dog of a childless, husbandless, middle-age woman with a large yard.

Our dog savior found just that person.  She had recently lost her dog and had even met Wally once.  And to meet Wally is to love Wally unless he does not love you.

So, while we were working with him and praying for him and worrying about him, we continued on that see-saw — he was good one day, not good the next, or the next, and then he was good one day and then not the next three.  And by mid-summer he was back to being kind of a dick. So much so my best friend who was staying with us looked at me one morning and told me I was out of my mind, that the dog had to go.

Another good friend, at the end of a long day of hearing the woes of Wally, said – “get rid of the pooch” as she headed for the Jitney.

And I would listen intently.  I would.  Then I would sit in my garden and cry. And then I would remember that when you ask the universe for something and it delivers it, you need to pay attention.

I had asked for a single woman with a garden and no kids and no other dogs and no husband and she was out there waiting to be Wally’s mom.

I could not ignore this.  As much as I loved him, perhaps everyone was right.  I was not meant to be Wally’s mom.

So, I called his Aunt TT who had helped him so much. I told her it was time for plan B.  I packed his things.  His plaid sweater, his fetch Monkey.  His favorite chew bone that Winnie had left intact.  His vitamins, probiotics, (don’t laugh, they work) his Greenies and his blanket.  I even packed his donut bed.

He would be happier.  I would ultimately be happier. Though I was not convinced. Wally is my spirit animal. Without Wally what would happen to my already fragile spirit?

But things started to change.  It was like Wally saw knew his stuff was packed and ready to go.  And he started cleaning up his act.

And Glenn started saying, I don’t think I can put you through this.  I don’t think you can give up this animal.  I think we just have to accept he needs extra attention, but he’s ours and we will take care of him.

But then there was Plan B sitting a few states away waiting for Wally.  I had promised him to her if they got along.  TT had set it all up and was going to give him a refresher course and then deliver him, his fetch monkey, his blanket…

I could hear all my friend’s voices, “the pooch must go, what are you doing? He’s just a dog.  He’s not worth the trouble.”

And then I’d look into his eyes and somewhere in his endlessly deep eyes, I could read we belong together.

But the woman was waiting for him. I felt like a surrogate who carried a child only to change her mind about handing the baby over.

The text came in late at night.

One of TT’s relatives was sick, they needed her, she could not take Wally for the week to fine-tune him.  But more importantly.  Plan B had a Plan A that was much more appealing to her than taking on Wally.  She decided she wanted to spend three months or more traveling and didn’t want the responsibility of a dog.

This whole carefully planned handover was no longer possible. Wally was mine to figure out what do with.  In fairness, TT did not drop the ball on me.  I had expressed my doubts to her before all the dominoes of our plan started to fall.

So, Wally was ours to keep.

And don’t ask me why or how or any other question I am unable to answer. But Wally changed overnight.

He watched me take his fetch monkey, his probiotic, his favorite chewy, his fall sweater, his winter coat, and his beloved bed out of the big bag and put them back.  He knew – OK, I believe he knew he got a second chance and he was not going to screw things up.  His behavior changed.  His aggression towards Winnie almost disappeared.  Now it’s normal brother-sister spats.  Plus, we have learned to avoid situations that might set him off.

Now he’s actually the best trained of our dogs.  Thank you, TT.   He’s the one who goes to the bathroom in two seconds when it’s pouring rain.
He greets people at the door with a lick and a nuzzle and not a growl and a lunge.  When I say place, he jumps into that bed that spent a week packed up by the front door ready to leave the building.  When I say get in your crate he does.  He doesn’t shriek then runs under the bed as Winnie does.

Glenn says day in day out, “the truth is, Wally, is our best dog.’

And he really is.

I know I have TT to thank. I know that somewhere, somehow, my belief and love and fundamental unwillingness to give up on him had something to do with it, spiritually and literally.

I also know he is my spirit animal and I have never given up on myself nor would I, so how on earth could I give up on Wally?