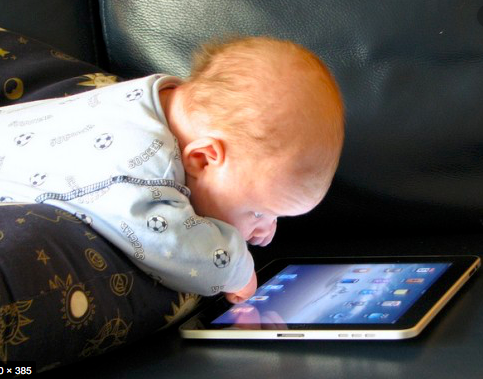 Smart Phones Not So Smart for Babies

Recently I’ve been trying to wean myself off my phone.

Without fully deleting my accounts, I’ve removed Facebook and Instagram from my phone.  So if I don’t respond, I’m not ghosting you, just gone offline.

I find Facebook to be a waste of time and an unnecessary distraction.  And Instagram, while I can get sucked in as easily as a teenager, has started to feel more toxic than pleasurable.

I have been meditating more. Every day! Finally.  Albeit yes, my mediation APPS are on my phone.

I’ve been trying to be more productive with my time,  and minimize the frenetic heated feeling that comes from the constant banners, announcements, endless texts, breaking news, and retail come hither the phone sends my way.

And you know what?  I have been happier. I’ve been sleeping better. I’m more balanced.

I’m not trashing phones.  They’re part of our lives and here to stay. But how about some more human contact and quiet introspection and time spent actually in each other’s company while not being endlessly distracted?

It takes a concentrated effort to swim against the tide of earbud wearing, screen staring zombies that most people seem to have become.

But the future is going in completely the opposite direction.

Right now I’m on a plane headed for California. Across the aisle from me is a nanny in the first seat. Her charge is in the middle seat. While the tiny tot’s mother is camped out by the window. And this tot is tiny. I would say fourteen months tops.

There is a set of earbuds, but the kid throws them down and no one insists she wear them.

The mother was downing wine at eleven am. The kid does not seem too attached to the nanny, but she is deeply attached to the iPhone. In fact, it appears to be the only thing that will pacify her.

I’ve been trying hard to be less judgmental; I am trying to live in a self-created peaceful zone in these crazy times, but my nature is my nature at certain moments, and this is one of those moments.

I have not stopped being annoyed and judging since we took off.

I tried a meditation tape. But the Ten Little Monkeys Jumping on the bed soundtrack could be heard above the soothing teacher’s voice.

I tried reading my book with my earbuds in my ears and some white noise playlist which did little to quiet those damn monkeys.

I asked the woman sitting next to me if she was bothered by this as she is on deadline. She said she tried to sympathize with mothers who travelled with young children.

Before we took off, she told me she was on her third round of in vitro. So, I guess any kid looks blissful to her.  She longingly said it must be very hard to travel with a baby on a plane.

I told her in fact it wasn’t. That pre iPhones I constantly dragged two children across the country and across various oceans and never had a problem.

When Taylor was a baby, I used to talk to her for much of the trip and show her picture books.  She honestly never made a peep.

This kid has not closed her eyes once in now going on four hours. She just stares at that screen. Over stimulated and unable to self-soothe. She needs her baby chardonnay – the phone.

In total honesty, when Lucy was a baby we had a tiny DVD player we would use on long hauls and she would watch movies with earbuds.

I also used to buy them something new and fun to do while flying. A coloring book and a big box of crayons. Plain white paper and florescent markers.  A deck of cards. When they got older a new doll to travel with. And when they were able to read on their own, they brought books and read them.

To the new generation this probably sounds like someone saying when we went to the store, we hitched up the horse to the buggy….

Yet I took a seven-year-old to Cairo like that. A twelve year old to Mumbai. But it worked. They developed imaginations and the ability to amuse themselves and they could fall asleep.

I just checked again – still wide awake and really agitated. Crying now. She does not want a seatbelt. She just wants to stare at her screen. And if she can’t have her iPhone she watches cartoons on the back of the seat in front of her.

I guess it boils down to love the screen you’re with.

She also does not really interact with her mother at all. This is very distressing, outside of my own annoyance at the situation and the sing song monkeys, this doesn’t seem like a good way to raise a child. It has to impact their brains and social skills. It does with older kids, and adults. It’s been proven.

I don’t think a lot about babies at the moment, so I was curious if my assumptions were correct.  So,I Googled it.

Between the ages of 0 and 2 years, an infant’s brain triples in size. A parent’s voice, touch, and eventually play can help build pathways in their brain that aid them in learning how to bond emotionally with other people.

But for children who spend too much time interacting with a screen, something different happens.

“Their neural pathways change and different ones are created,” says pediatric nurse Denise Daniels. “It affects concentration, self-esteem, in many cases they don’t have as deeply personal relationships.”

It also creates addiction, which is very interesting to me having written about the topic.

Dr. Gary Small, a professor of psychiatry and director of the UCLA Longevity Center, (and a really nice guy) says,

“One of the wonderful things with this technology is that there’s always something new you can do — it’s almost infinite,” For that very reason, it’s very difficult to give up and stop using them.”

The article goes on to say:

“Smart phones and tablets allow a kid to get whatever they want at the click of a button. It does not teach them moderation, impulse-control, or how to challenge themselves, which are traits of an addictive personality.”

I just looked over again, (Lucy would tell me I’m staring, but she’s not here) the kid is holding a book.  She looked at it for two seconds tossed it aside, took some juice, let out a shriek and reached for the screen on the back of the seat.  She’s not happy.  She wants the iPhone and the monkeys on jumping on the bed.  In a moment of good parenting or in response to my saying it was loud, the mom is not allowing it.  She is trying to cuddle her and soothe her, but the kids wants no part of it.  She needs her iPhone.

When iPhones replace a mother’s love, we know we are in trouble.