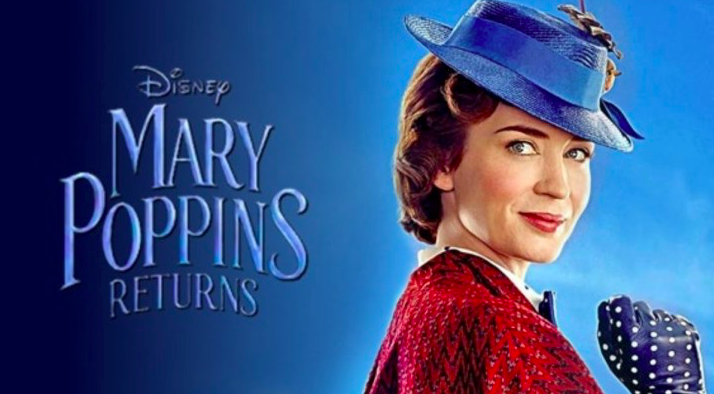 Mary Poppins Returns and Just When We Need Her

Sequels make me squirmy.  If it’s a movie I loved I’m trepidatious they will somehow ruin it. It may be I worked in Hollywood for too long,  but you can’t set out to capture magic,  or it wouldn’t actually be magic.

I’m not alone when I claim Mary Poppins was THE film of my youth.  It came out in 1964 when I was eight. I was obsessed with it.  I took advantage of my grandmother’s good nature and made her take me every time I saw her.  I know I made my mother sit through it time and time again.  If Robert Mueller asked me how many times I’d seen it I would be afraid to respond for fear of perjuring myself.

And then with the birth of two daughters of my own, I got to sit through it for two more childhoods.

In 2013, we had Saving Mr. Banks the slightly biased Disney film that was a  behind the scenes look at the making of the original.  Despite its manipulation it too made me cry and explained a bigger theme I could have never articulated, but perhaps subliminally picked up on in my childhood, which was Mary did not swoop in to just care for the children, but for the whole family;  primarily Mr. Banks who really needed to wake up and smell the flowers and live in the moment and enjoy his kids before they left the house for good.

Life is messy at times and it’s hard enough for grownups to make sense of it much less for children.  But Mary Poppins had the ability to clean up any mess and have it fly into place or disappear into her carpet bag.

And in a way, she was an early self-help guru of sorts – it’s not what life dishes out, it’s the way you interpret it that counts. It’s about being a good person, taking care of those who need help and treating all people the same.  At that time someone of the Banks class would never have involved themselves with a Chimney Sweep such as Dick Van Dyke.  But all men are equal and sometimes the most kindness is found in those with the least material wealth. This a is a life lesson Mary tries to teach the kids when she flies into their upper-middle-class turn of the century lives.

Just a Spoon Full of Sugar Makes The Medicine Go Down.  Is about finding some good in everything, even in the things we may not like.

In ev’ry job that must be done
There is an element of fun You find the fun and SNAP!
The job’s a game And ev’ry task you undertake
Becomes a piece of cake

And then amidst all the high stepping dancing of Dick Van Dyke, he shows us it’s not what you have that makes you happy it’s about being authentic to who you are.

I could go on and on about the contents of the original.  And I went into the new one wanting exactly what I got handed to me 52 years ago.  Which means I spent the first third outrageously disappointed. OK – scratch outrageously, but I felt let down.

The energy is different.   No spoiler alerts, but it fast forwards to a grown-up Jane and Micheal Banks who live in the same house, which does not look nearly as enviable as it did when they were kids.  Their adult lives are a shambles thus Mary flies in to save them all and not looking a day older than she did in 1964.

Looks aside, Emily Blunt is no Julie Andrews. She’s perfectly acceptable and if you hadn’t seen the original you would not mind her at all.   And as much as I love Lin Manuel Miranda – and I love him a lot, he is not Dick Van Dyke. In fact, I’m not even sure he’s a movie star.  He’s something else;  Perhaps something better.  But the camera is not his best friend and his character does not do his talent justice.

The first third has a lot of special effects that made me think they are just trying to get a new ride for theme parks out of this. Mary Poppins is not helping me learn how to get through the ups and downs of life and tidy it all up.

And throughout much of the film she doesn’t.  Though she and she and Lin-Manuel save the day in the way movie heroes do.

But, by the middle it does become magical and they drop some of the Pixar stuff and they move into more of the original stuff at least in feeling and atmosphere, and it does become feel good, and you do start thinking  even though life may suck in certain ways, we can get through it with the right attitude.

And by the final third, I was taping my foot and moving in my chair and I shed some tears.

But in these uncertain times, with so much turmoil in the world on all fronts, and with Trump as Scrooge and the Grinch rolled into one, Mary Poppins has flown in just when we needed her.  She arrived to teach us to look for the light and follow it.  To take joy in the absurd;  To hold those who are gone deeply in our hearts and thus they are not as far gone as our hearts may have us believe;  That the good guys do still sometimes win.  And no matter what, it’s still important to fly a kite, soar with balloons and that at the end of the day or the movie family is everything.

And this Holiday Season we all need a big spoonful of that.

December 19th it opens wide and I say go.  While the film promotes the notion one can turn back time, you really can’t, but some things are timeless and Mary Poppins in any form seems to be one of them.