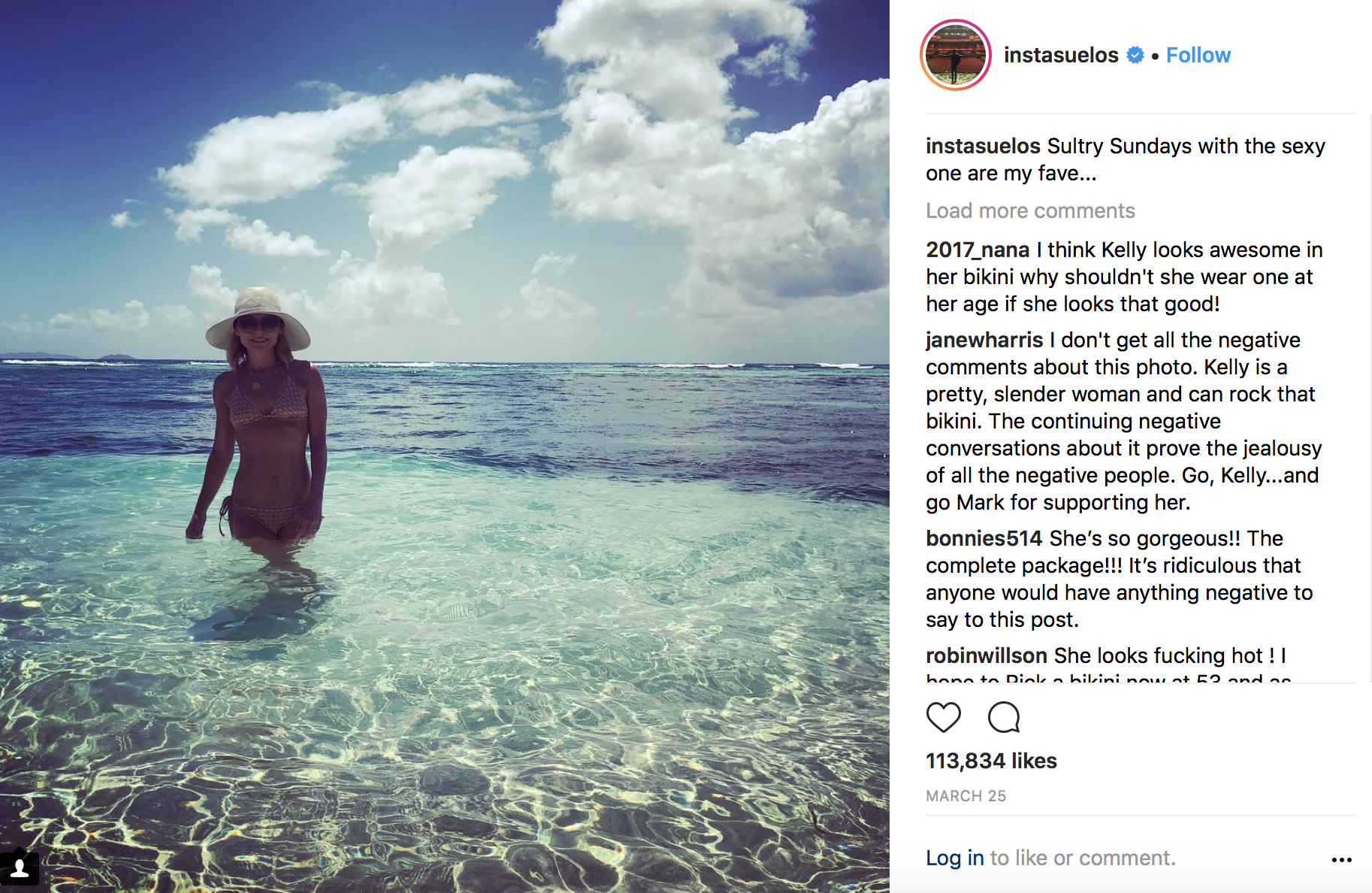 If you have not been following the story (with so much in the news it is not front and center)  Ripa, who has a killer body for any age, was on vacation with her husband when he Instagramed a photo of her looking hot and sexy in a bikini.

The internet trolls instantly rose to their mighty heights and started slamming her, accusations collectively being, she is too old to wear a bikini in public, she is too thin, and her head is too big.  But the biggest focus was on “what is an old lady like that doing in a bikini?”

It’s easy to come to her defense, forty- seven in my book is not old.  And even if she was sixty or seventy with that body or even another one she could wear a bikini if she wanted.  And the truth is she has the body any age would envy. But the body type should not be the issue, the issue for me is the shaming, the roar of ageist crowds who feel they can dictate what and when we can do certain things.  And that is OK to humiliate someone over something they have no control over – their age.

The double standard, of course, is you never hear this about men.  A man would get, wow, isn’t he ripped at fifty. A woman gets  “go home old lady and cover-up.”

We are in the process of so many cultural awakenings against discrimination, but ageism is still somehow acceptable. You get nailed for calling people fat.  We are very informed on the right pronouns for gender fluidity. And we are hopefully becoming collectively sensitive to racism. And only a deplorable in my book would ever judge anyone on race. But calling people old, discriminating against older people, firing them and shaming them remains perfectly acceptable on all fronts.

In the world of hiring – diversity is now very much on everyone’s minds, except when it comes to one of the most discriminated and marginalized groups, women over fifty.  We have been totally left out of the diversity hiring practice.

In fact, it is the reverse, women fifty and over are the most likely to lose their jobs and least likely to find another one.

Labor economist Teresa Ghilarducci says” if you’re a woman over the age of 50, finding work has statistically gotten harder since 2008.”

She also goes on to say  “This age discrimination problem is going to be a bigger problem for women as more and more women are having to work longer because of divorce, or eroded pensions, or lower pensions, because even if they worked their whole life, they were paid less and thus, accumulated less in their pensions. This age discrimination is actually going to create a population of very low-income and vulnerable elderly. And what’s really depressing about this study is that that women are going to be hurt worse than men.”

The weird thing for me is now forty-seven is considered old.  Forty-seven is not old. Come on.  They say in this country age is usually measured by earning power.  If this were entirely true Kelly Ripa would be exempt as she makes more than most men at any age.

But she is not, because money or no money women are considered old past forty-five now. Which was certainly not the case when I was younger. Sixty was the point when people were getting aged out.  My mother made it to sixty-five before she was aged out and had to reinvent herself.

Comparatively, I was aged out of my high paying screenwriting job at forty-eight, which is pretty much in keeping with the statistics of when women started losing their earning power.

A Federal Reserve study has shown that wages stop increasing at about the age of 45. And so, from 45 to 55, wages decrease by 9 percent. From 55 to 65, another 9 percent.

And at this point, this is when women become totally dispensable and often invisible.

But that is for another day.

Right now, I want to focus on this terribly debilitating and humiliating and practice of age shaming.

If Kelly Ripa had wrinkles they would slam her too.  But then if she has/had Botox they would criticize her for that.  They say she is too thin, but god forbid she was a bit too fleshy she would be labeled old and fat. Post forty-five you just can’t win.

The Millennials are standing up and demanding respect and elasticity in the way we see them, sexually, physically, and in terms of their capabilities.

Considering Boomers are going to be around for another twenty to thirty years and are in better health, shape, and sharpness, we need to demand the same considerations. We need to stand up and address and denounce age shaming be it of ourselves, our friends or our public figures.

Kelly Ripa had her hot, hunky husband to take on the trolls for her.

We need to take on the trolls for all of us and start to put an end to the shaming, stereotyping and ignoring. We need to demand age diversity in hiring. You cannot erase seventy-six million people from this country.  We have more buying power, we have more accumulated knowledge and we will continue to grow and expand our worlds.  We need and want jobs. Most of us are still as talented and energetic as we were in our thirties and forties.

So the public needs to address that and stop shaming us for living vibrant lives and only trying to sell us meds and funeral plots.