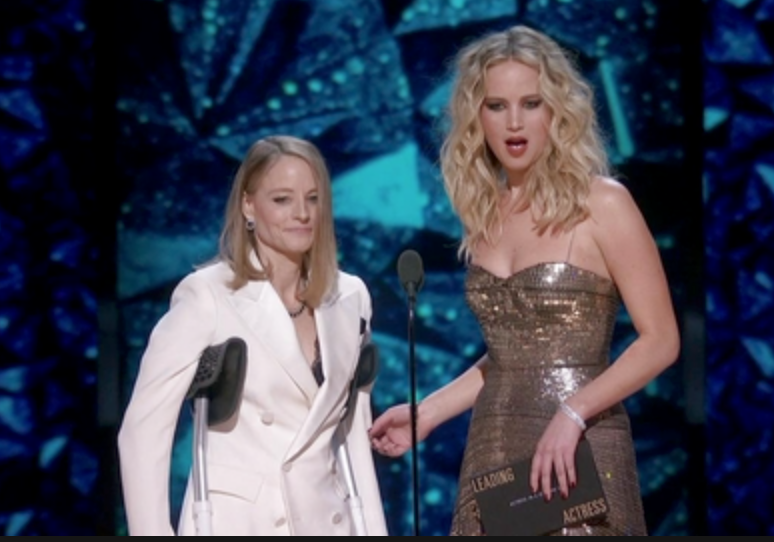 The thing about the Oscars is few people remember who won what award but everyone remembers what everybody wore.  Oscar fashion is one of those things that is talked about for years after the films have been forgotten.

This year I had my eyes on the over forty-year-old arms or lack thereof.

I have suddenly become very sensitive to this topic as despite the fact I work out all the time, do tons of push-ups – though I think I do them wrong. I lift weights, I do endless things to tone biceps, triceps and whatever cep may be lurking near my head and between my stomach, I suddenly have what Richard Simmons used to call Hadassah Arms.

Hadassah Arms are arms that have that hanging flesh when you hold them out.  Arms that get that little bubble of fat that hangs over the armholes of a sleeveless dress.  He used to call them that as they were normally the arms of Jewish grandmothers who were members of Hadassah.  And the weird thing is,  I never had them, well I had them but they were tolerable. Now they are all I see. They seem to have taken over my upper body.

In fact, my older daughter went home with a nice stack of LBD’s yesterday as we did an arm party try on.

So, of course when I watched the Oscars last night it wasn’t the lithe young things in their wispy, backless, strapless, sometimes one armless confections I was interested in, it was how the stylists covered our greatest actresses’ Haddash Arms.

And cover them they did.  If you do a survey which I have now done, nobody over a certain age is permitted to show their arms at the Oscars. OK, they are permitted, but they are not encouraged.

I’m not sure how I feel about it. I know now that I am suddenly seeking out dresses that cover my arms I understand it.  But now that it’s the year of the women, maybe we can do something and liberate us and allow us to show our arms, floppy, flabby and all. 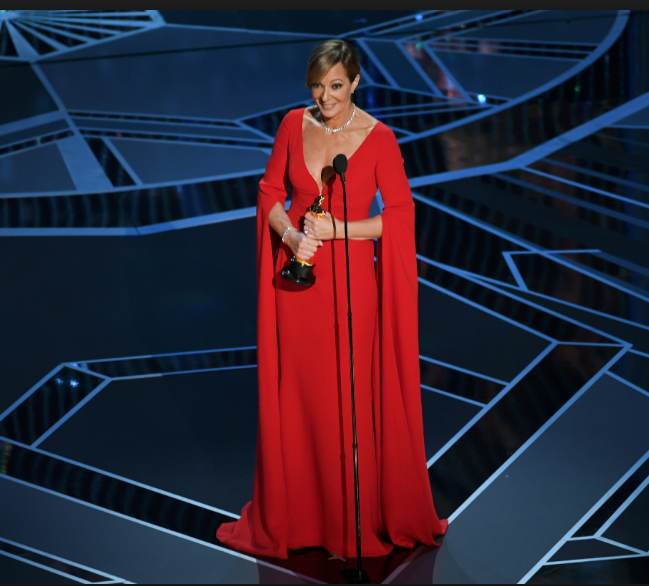 Best Supporting Actress winner Allison Janney covered her arms in red with a plunging neckline.  She is one year younger than I am.  So she is a good 18 years from when they like you to start hiding those saggy underarms. I think she looks lovely. 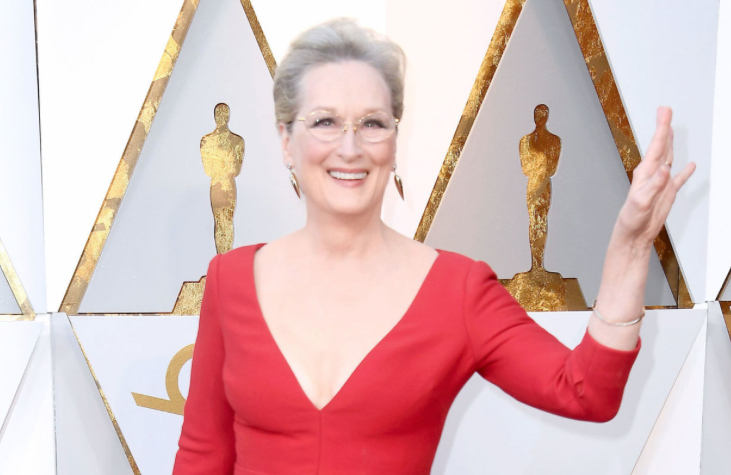 She’s been nominated more than anyone in history, she should be allowed to show up naked if she wants to.  I do think her stylist should have checked in with Allison Janney’s stylist just to kind of make sure they were not wearing a version of the same dress. Which they were. 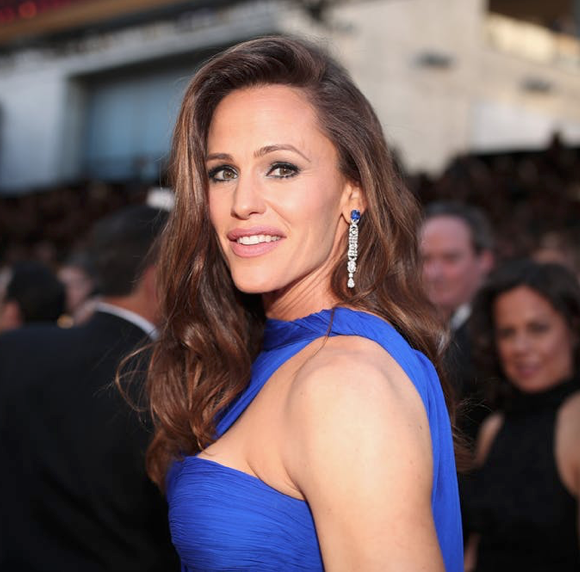 Jennifer Garner is forty-five and she is gorgeous as is her dress. But you can see the creepy creapies crawling under her arm and just starting to hang over the fabric.  Two years tops and she will be in long sleeves. 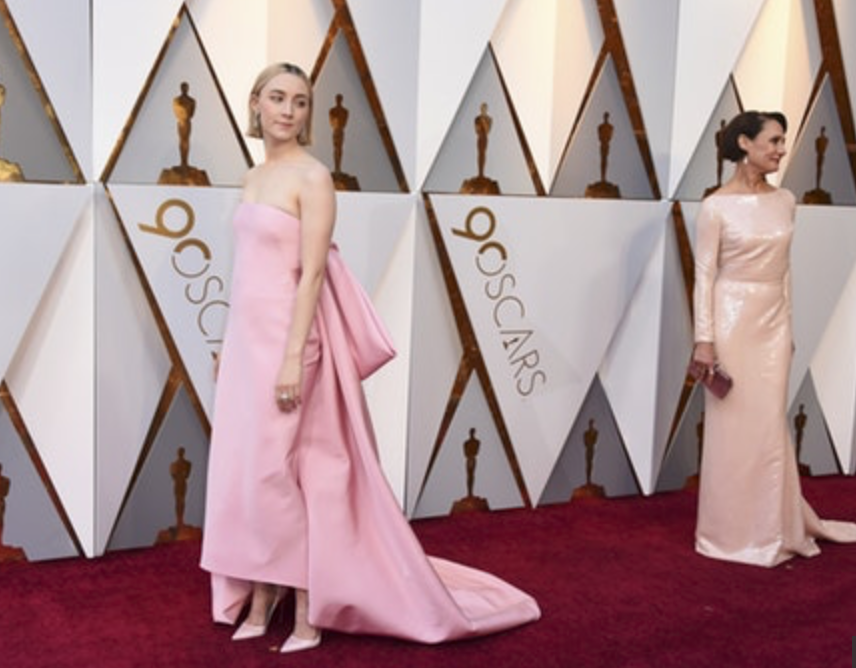 I like this shot as it’s the yin and the yang or the tight versus the hang. You have twenty-three-year old Saoirse Ronan in her strapless pink dress next to sixty-two-year old Laurie Metcalf also in a pink dress.  Notice long sleeves.  Not even three quarters allowed. But I think Laurie looks great. 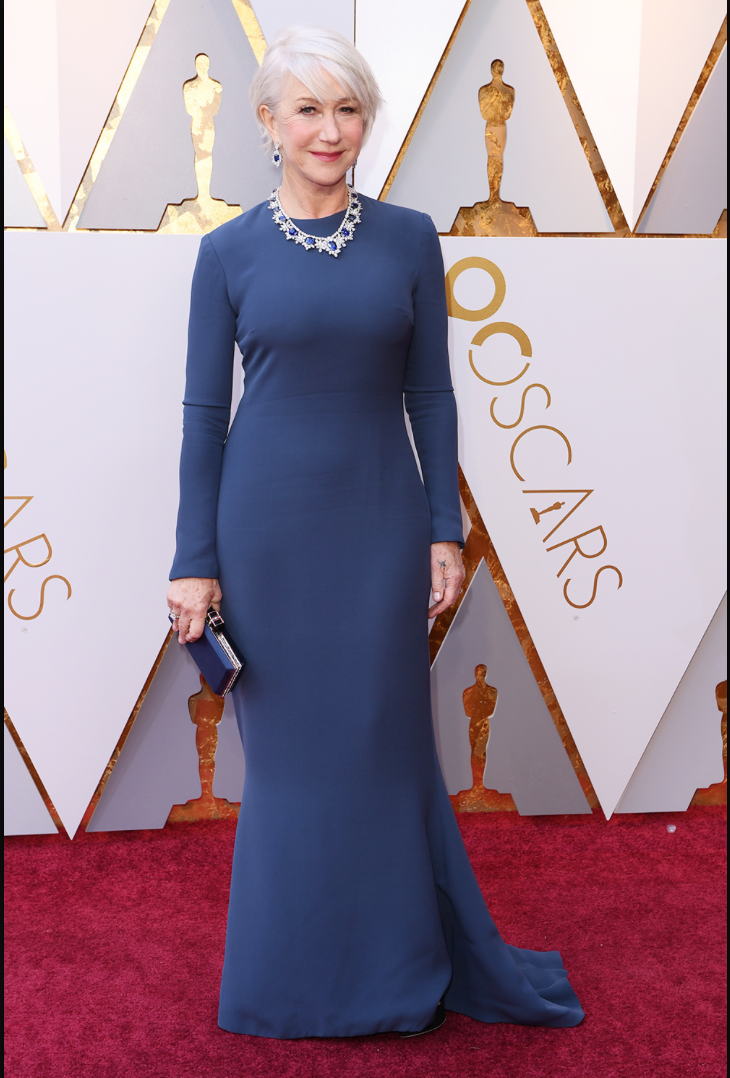 Dame Helen Mirren, there was apparently a big curfuffle due to the fact her nipples were showing, which I guess after a certain age is a fate worse than slack arms.  You can go online and literally see photos of her with a black bar over her boobs. Do you think they would do that to Jennifer Lawrence if her nipples were showing? And they say we are moving ahead as women. Feh. As my grandmother who really had  Hadassah arms would say. 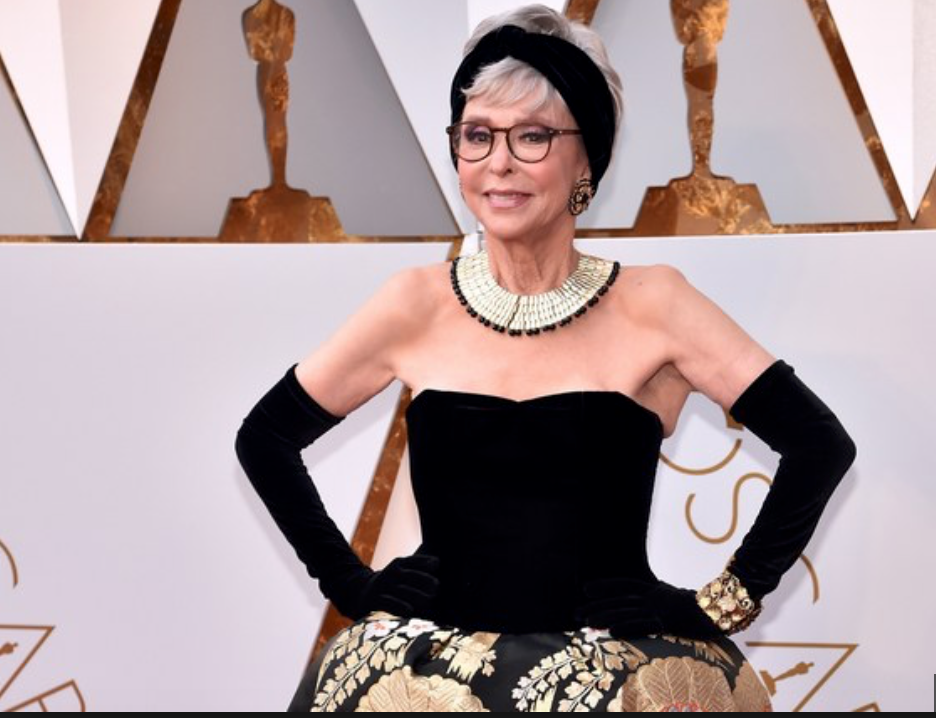 I’ll have what she’s having.  Eighty-six year old Rita Moreno who is not only wearing the dress she wore in 1962   but her arms look amazing. I mean like….I don’t know did she have an arm lift?  She clearly does her push-ups correctly.   Is it a computer-generated image? Whatever it is she’s my arm hero. 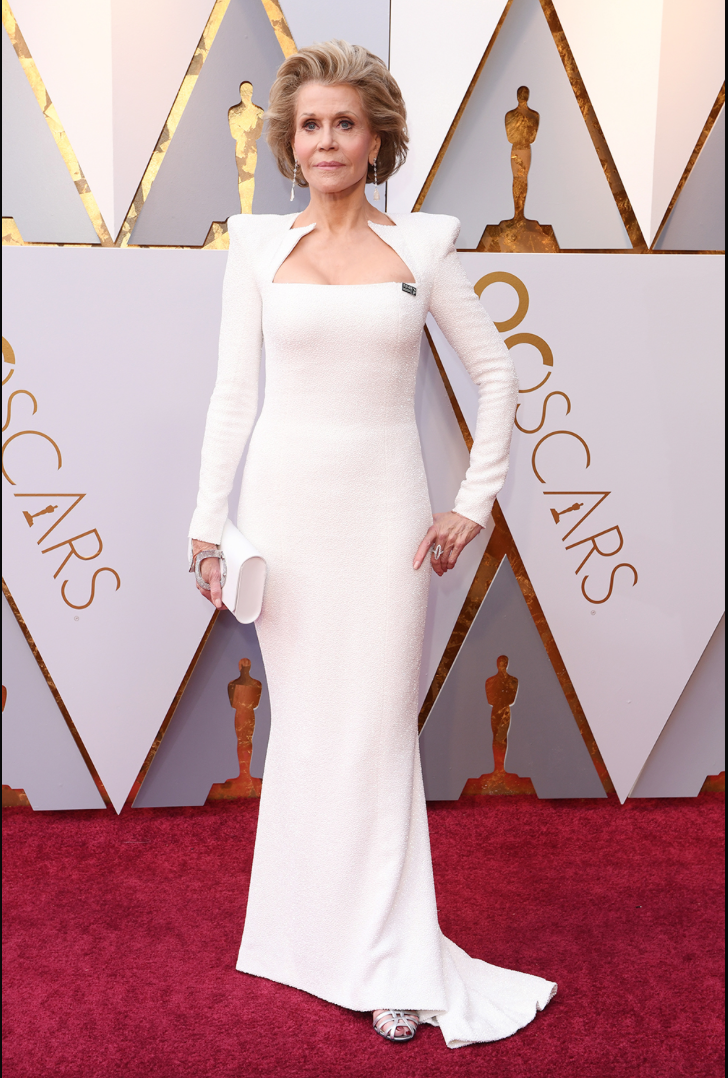 Despite how impressive Rita Moreno’s underarms are – eighty-year-old Jane Fonda gets my vote for covering her arms (which are probably pretty darn good after all those years of feeling the burn) but remaining sexy and up to date. No age apology dressing here.  She looks hot.  She looks current.  She looks like she could do a remake of Barbarella if they asked her.  I was wowed.  I love the big shoulders and the neck detail and how it looks strapless but not. It’s awesome!  #80yearoldgoals 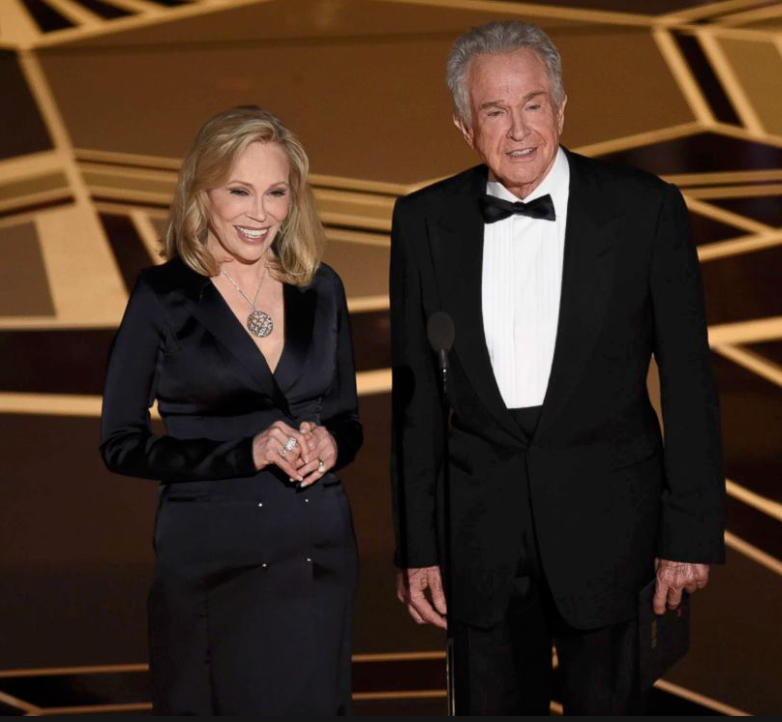 Seventy-seven-year-old Faye Dunaway tastefully covered her arms. And her facelift seems to have settled nicely since the last time she and Warren Beatty appeared at the Oscars together. 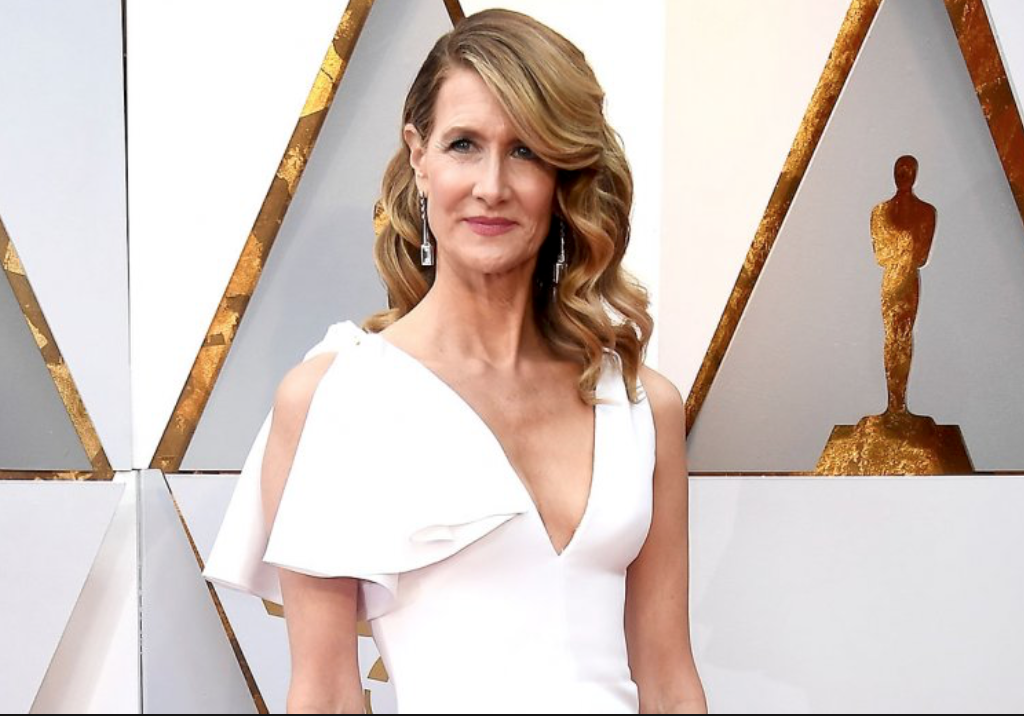 At fifty-one Lara Dern is betwixt and between.  She decided to cover one arm and expose the other.  I like the idea of just covering the part of the arm that is in question and keeping the shoulder and the whole arm open. I thought that was what her dress did until I saw that one arm was totally exposed. Her arms are fine and I like that she went screw it I’m showing them. But the dress looks like they forgot to finish it. 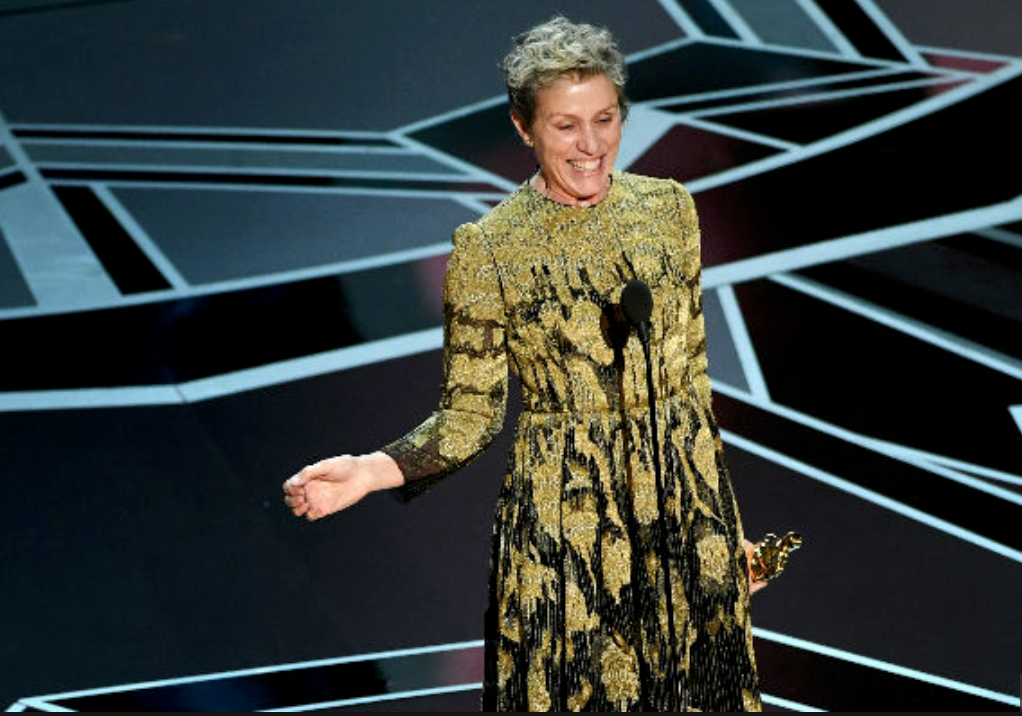 You gotta love Frances McDormand she does not seem to care what she wears, whatever she finds hanging in the closet or in this case maybe even hanging from the window she will just whip it out or down and put it on. But, the arms are covered.