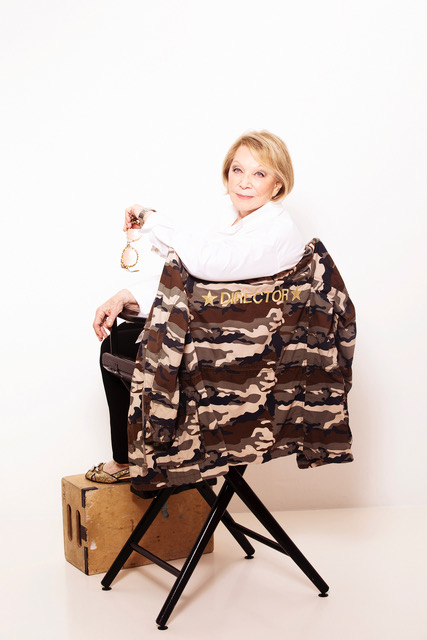 Joan Kron – Jackie of Many Trades – Master of Lots

Writer and filmmaker Joan Kron has done and been many things during her ninety years on the planet.  When I asked her to be interviewed for Balance and Beam I wanted to focus on her achievements from ages sixty to ninety.  That’s what floats my boat these days.  But she has done so much I feel compelled to give you the crib notes version before we launch into her last thirty years.

Joan was born in 1928, she did many things before she was ten but by her own admission at 10 she was a “budding author and a fearless self-promoter.”

In 1939 when she was 11 she became a “modern Design enthusiast.”   This was clearly planting a seed that would pay off later when in 1978 when she was fifty and along with co-author Susan Slesin she would write the book High Tech: The Industrial Style and Source Book For The Home .” She and Slesin coined the term High Tech which we all still use to this day.

Backtrack a little – after Yale Drama School, she gave into her “guilt-inducing mother” and married the obligatory nice Jewish doctor.  She was only 22 at the time. They had two children, a boy, and a girl.

In the subsequent years, while she was being a wife and mother she would also be an interior designer, a feminist, costume designer, a magazine writer and publisher, a pop art promotor and Chairman of the Philadelphia Arts Counsel and this is only a part of it and only took her up to age 39.

At forty she would tragically lose her daughter to a tropical disease caught when the family moved to Ceylon (Sri Lanka)  for two months so her husband could do medical missionary work. A loss she is yet to recover from.

And at forty-one, she went to her 25th Fieldston High School reunion and fell back in love with her high school sweetheart.  They both left their marriages two years later and were happily married for thirty-six years until his death in 2005.

Suffice to say the twenty-three years between forty and sixty-three were full of accomplishments and life. Step-mothering three of her husband’s children, mother to her son and so many writing jobs and design related activities.

But for me, her story kicks off when she was sixty-three.

When I met Joan, she was the oldest living beauty editor in the business and she was embarking on making her own documentary Take My Nose Please. The beauty thing I was super impressed by, the doc, I had doubts she could pull it off. Come on, she was 85 when she started it.  But nothing keeps Joan down.

I left Avenue Magazine in 1990 and, in 1991, joined Allure magazine, a Conde Nast start-up, to write the psychology of beauty and soon segued into the plastic surgery beat, which I invented and covered until I left in 2015 at age 87.

From the time, I joined New York magazine I was working with editors much younger than myself.  You have to swallow your pride. I respected them for their magazine experience. They respected me for my life experience. But I always tried to stay on the cutting edge.

People used to ask Linda Wells when she was developing Allure, how much can you say about lipstick?  It was meant as a put-down. Well, thanks to Allure—which was widely copied, you can say tons on Instagram and YouTube about lipstick, techniques for lining your eyes, nail design and cheek contouring, and on and on. There’s a huge market for it.

But the other part of beauty coverage that Allure pioneered was examining the social and personal meanings of appearance—fat, freckles, wrinkles, nose bumps, breasts, hair texture, big ears–whatever. As a society, we are completely blind to how many decisions about individuals are made in split seconds about our clothes, our makeup, our nails, our appearance. When I started at Allure, weird colors in hair were declassee. Yesterday I got a pink highlight in one strand of hair. Wherever I went after that I was getting high fives. A touch of pink hair is classy now. The changes in meanings attached to appearance are endlessly fascinating. I don’t see that on Instagram.

I got interested in filmmaking after my husband died in 2005.   And it took five years and several false starts before I made Take My Nose Please.

I did not think I could pull it off. I was sure every day I was failing but I refused to give up because I had told the world I was making a movie.  I didn’t see a successful finale. I just saw a process that looked interesting. And I needed a project. My husband was dead and I didn’t want to write another book.  I don’t play golf. Or tennis.  I don’t paint.  I have no interest in going on J-Date and I don’t travel.  But film fascinated me. I was in someone else’s film as a talking head and when I saw it, I just said to myself and anyone who would listen, I could do that.

I took the course in Final Cut Pro –not to master it—but to understand what it was capable of. I never intended to edit the film myself. If you understand the editing system, you are able to give instructions to the person using it. I admit that before I hired an editor I tried to use this new skill to make changes to our sizzle reel, but I found I was forever calling my instructor and getting a refresher course on the phone. I eventually faced the fact that I would never be a film editor. But I learned what the system was capable of.  The end to that story is amusing–the editor I hired, Nancy Novack, considered Final Cut too basic and we leased a more sophisticated system—Premiere Pro But, I still have my Final Cut diploma hanging at the editing desk in my office. It’s there to defraud you. Like the player piano we had when I was growing up. I would sit there and pretend I was Chopin.

Stay curious and don’t hang out with people your own age unless they are doing creative things.

They look forward to retiring. My husband wanted me to retire when he did. I refused. I’ve always considered work fun. It’s as simple as that. 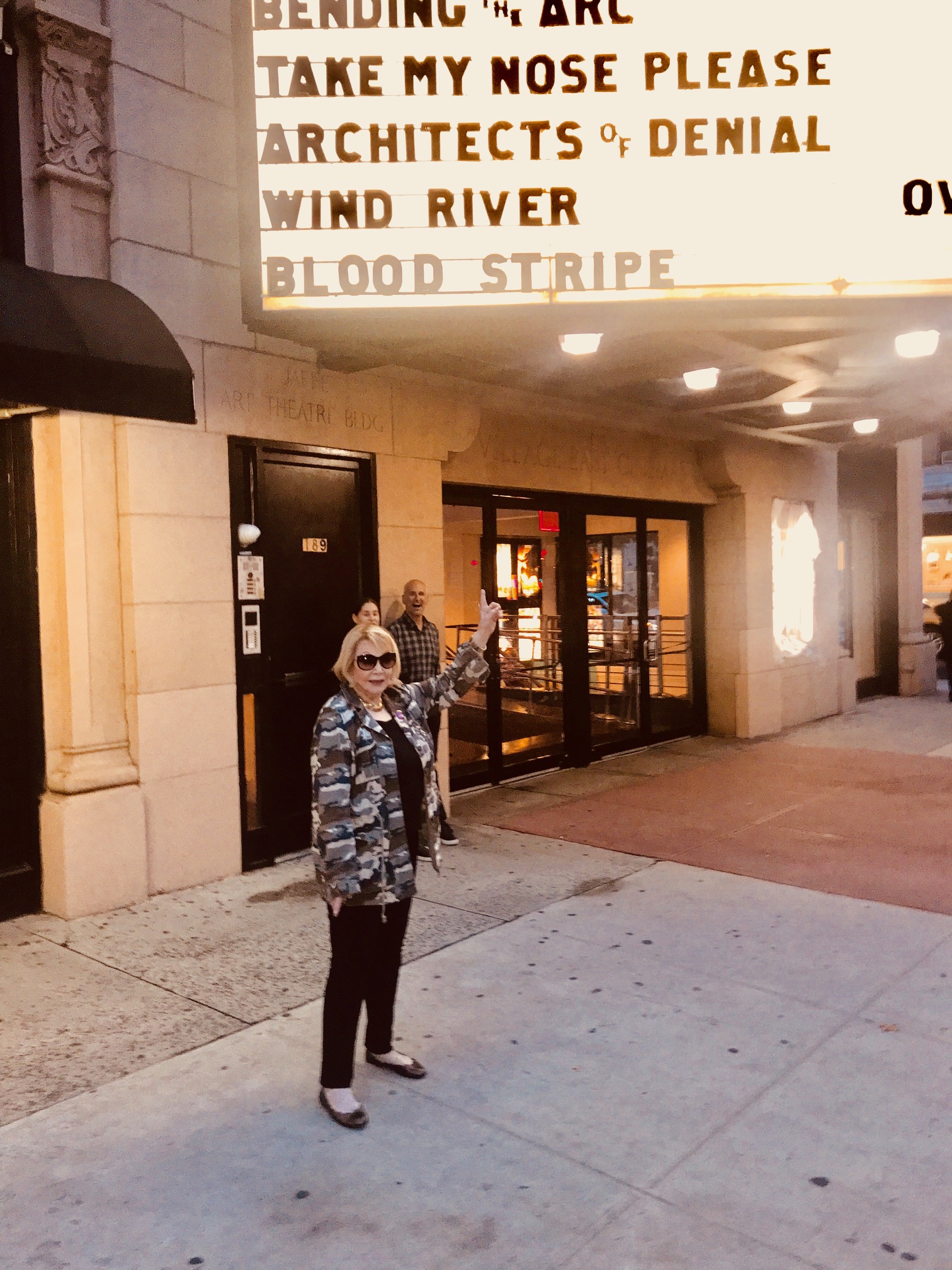 I’m not an activist.  I don’t look at the world and try to change it. If people think they can learn from me that’s fine. But I am not seeking to be a role model.

I think older people often deserve the rap they get. If you are closed to change and new ideas the world will pass you by.

My father was very proud that I was employable. He emphasized that all you have in life is your reputation. Take care of it.

You can’t chart your course in life. Life –and death– happens to you. Doors open. You take the opportunities or you don’t. You take chances or you don’t. I could have designed the circus. I didn’t. I could have written the book about backstage at Hair. I didn’t. But I took other opportunities. You try to live life by your values and the people you meet along the way know you by their experience with you.  If they liked working with you they may open doors for you. It’s so simple. I always got my next job through people who had worked with me.

My mother had good skin.  I stay out of the sun. I’m fair and I could never get tan—much as I tried with lotion and reflectors when I was young. So, one day I just gave up the sun.  I don’t drink because when I do drink, even a sip of wine, I get dizzy, very fast. So, I made a conscious decision at 25 to give it up.  I gave up cigarettes at 30 after an E.N.T. doctor said my cough would turn into something much worse if I didn’t stop smoking.

No matter how good your regimen,  you age. I did.  I’ve had three facelifts. A full face and eyes at 63.  A brow lift at 68. And another facelift at 78 after my husband died.  I’m not planning another. Too risky at my age. I have no regrets about those surgeries. Looking younger made me feel younger. I can’t understand why anyone wants to honor the frown lines they “earned.”  I don’t honor the pounds I’ve packed on at holidays. I have cried several rivers in my life. My daughter died 50 years ago and I still cry for her almost every day. I cry in the shower. I cry when I read sad stories in the newspaper. When I hear her name. When I pass her picture in the hall. Do I need to flaunt my private pain?  No. I still love to laugh. I function at a high level.  I see a certain sadness in my eyes in photos. I started wearing dark glasses after she died because I never knew when I would start tearing up. Then it became my style. I have about eight pairs of big dark glasses with different frames. I support the eyeglass frame industry.

I get Botox and fillers about twice a year and sometimes a light laser peel that requires no topical painkiller. That’s how non- invasive it is. Keeping facial skin moisturized is important.  I use Neutrogena moisturizer and any good brand of OTC face cream.  But most of all I believe in exfoliating. I currently favor Sisley Paris Creme Gommante, a buffing cream that looks like grey mud. No more than once a week. You put it on, let it dry, rub it off with a terry towel and put on moisturizer– and your skin looks amazing.

I just worked out the basic premise of my next documentary.  Raising money is the hardest part of filmmaking, but this idea is so important, I hope to get foundation support. It will be serious and amusing at the same time—like Take My Nose …Please! 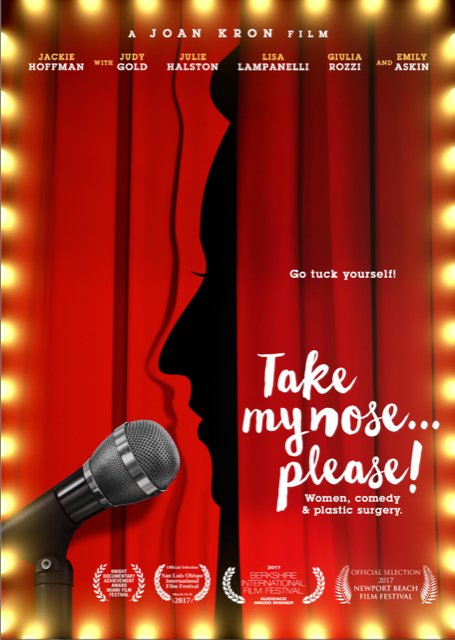 You can see Joan’s award-winning film Take My Nose Please on iTunes and most streaming services.