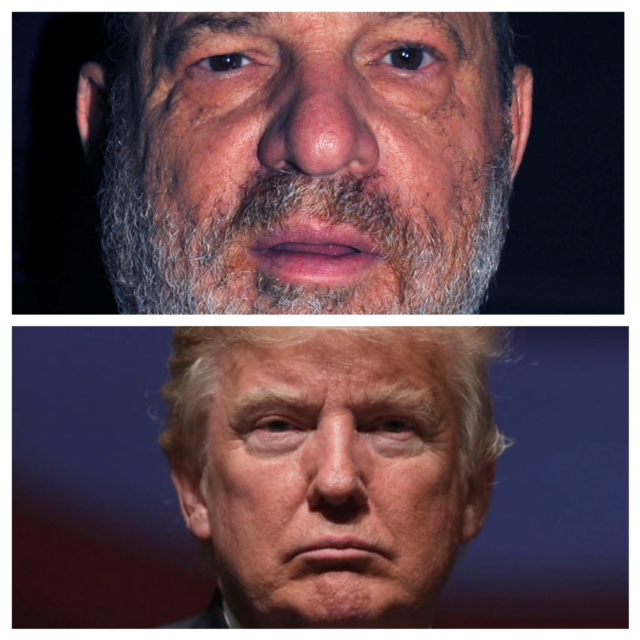 HARVEY AND DONALD – SEPARATED AT GIRTH

People are literally starving to death in Puerto Rico. Food, medicine and the most basic of aid is still slow in coming to them. Many will die and more will never see their world return to normal.  Tens of thousands are in desperate poverty and deprivation and we are doing next to nothing.

Much of the Caribbean is in total shambles; according to the New York Times

The airline said its operations are still suspended to the Turks and Caicos Islands, St. Croix, St. Maarten and St. Thomas. Indeed, the U.S. Virgin Islands said visits should be postponed until further notice.

This means people, poor people, have lost their jobs as well as their homes and many futures have been destroyed forever.

As I type this, fires ravage the Napa Valley and surrounding areas. Entire neighborhoods have been wiped out. And that’s just for starters.

We are only a shade over a week away from the deadliest shooting spree in American history.

On the news last night, they gave the staggering numbers  of how many will die if our president decides to go one on one with “Rocket Man.”  Once and for all proving which lunatic leader has the biggest swinging missile.

Yet, here we are with all that going on and the four top news stories are about Harvey Weinstein and his decades of sexual misadventures, perversions, and female bullying.

Not that it’s not a deeply important story – it is.  It is so important it’s been in files on the computers of many writers over the last fifteen or so years, just waiting for one brave producer or editor to say “go.”

Sure, it’s a story of perverse, predatory behavior of a powerful man on innocent women. A story that has the glamorous locale of the film business and famous movie stars in some of the lead roles.  It even has a walk-on with Brad Pitt confronting him then signing on to work with him.

It’s an old story, a daily story. A story that has gone I imagine since the beginning of time and my cynical guess says it shall continue.

Yes, these guys are outed, sometimes, eventually.  Harvey will trundle off to some snazzy rehab in the South of France, where he might wander off and force some girl who speaks no English watch him whack off.  Though he is wifeless, companyless and perhaps botherless. All of which he deserves.

But of course, anyone who knew him, or was in the film business knew this story. Knew he was a brute, a bully, a predator. He ran a mean ship. I was there.  I went into those offices many times over the years. I’ve met him.

The vibe was not a good one. I couldn’t get hired there as there was a one-time assistant to Harvey who ended up running part of the company, who decided for no reason at all that she would never hire me. Yet, I was dragged in time and time again only to be rejected. It was a dysfunctional, nasty place Miramax, run by a deplorable man, and the people who covered for him and many who adopted his way of doing things.

Yet, for many years Miramax made money and earned Oscars so people turned their backs and let Harvey be Harvey without any interference from judgment or the authorities.

And of course, all those women were afraid to speak up. Look what happens when they do.   In this case, it really did take a village – 31 women in all so far. And it took Ronan Farrow who has his own very real reasons for wanting to reveal the truth when it comes to predatory behavior on the part of famous men to write the story that brought him down.

But for me, the most interesting part of this story and what is giving it all the coverage it has, as it has a lot for a guy who is not a household name.  Let’s face it, when it comes to fame, Harvey is nowhere near as famous as Bill Cosby.

If you showed his photo to 9/10 of the country they would not be able to tell you who he is.

He is famous in a very particular segment of society. But he’s making national and international headlines.  And I think the reason is – he is basically Donald Trump.

What we have here is Donald Trump who didn’  get away with it.

The two are so close they are only separated at girth.

Both were big chiefs in their own fiefdoms. They ran their businesses on their own terms, by their standards and were both so volatile and vengeful nobody wanted to cross them.

Now in the plus column, they were both also charismatic when need be.  Both were good at what they did and even better at telling the world how good they were at what they did.  Both had their families working in their businesses.  Harvey had his brother Bob, who actually was in charge of the real money-making part of the operation.  Donald brought in his kids and I think had his brother working with him at one point.

Both have an almost Mafioso persona both personally and professionally.

They each have five children. Both have multiple marriages behind them and are presently married to younger very beautiful women.

Then these two predatory characters who had the world covering for them, each got their own beauty franchise. Harvey produces Project Runway for BRAVO a subsidiary for NBC, who BTW refused to ever let the story go to air.

And Donald has Miss Universe.  Places where they could both be surrounded by young, beautiful women, though to date there they seem to both have kept their wieners in their pants in these situations.

And then of course what they really had in common until this week was nobody was going to cross either one of them.  Big companies had their backs, powerful people had their backs, lawyers had their backs.  They made sure of it. And they threatened and settled with those who made noises about outing them.

But then this week the lid flew off Harvey’s cover and everyone went nuts.

Are we nuts because it’s one more case of women being abused.?  I don’t know if it really is. Because while the rich and powerful get to abuse the young and beautiful, women are being abused by men every minute in this country.

Is anyone worrying about the girl who works at Walmart who is forced to go down on the manager or she will lose the job she needs to support her kids?

Do we care about those women, or is it only the ones who get trotted out and represented by Gloria Allred whose stories we listen to?

Because from where I sit I don’t see this conversation changing that much of anything.  Some famous guys bring it to the forefront every now and then and then it’s just business as usual.

Don’t get me wrong. I think it’s important, vital. And I think the fall of Harvey Weinstein is something people will applaud for years to come.

But what about his psychic doppelganger, what about the man who has our future in his hands?

How much do we care when there are tapes incriminating him?  Tapes we heard where he said, when you’re celebrity you can have any woman you want, you can grab them by the pussy.   Billy Bush was fired and two weeks later Donald Trump was president.

What about the fact that in some vault there are more incriminating tapes from The Apprentice that MGM and producer Mark Burnett refuse to release. Tapes that according to people I know who were around that show say make the pussy tape sound tame.  What about those tapes? What about that ring of fire?

If we care so much about women’s rights, women’s safety and women’s ability to speak out freely without fear when they have been abused, how is it we have a known sexual predator, someone that not only is guilty of it, but has publically condoned it sitting in the most powerful job in the land?

At the end of the day, Harvey Weinstein was a producer whose best days were behind him. He had power in a small community and he got finally got his.

But in the mega picture, we have Donald Trump, Harvey’s psychic twin with the code in his pocket.  I don’t know about you, but that does not make me feel like much is changing at all. In fact, I think it makes it all a whole lot worse.