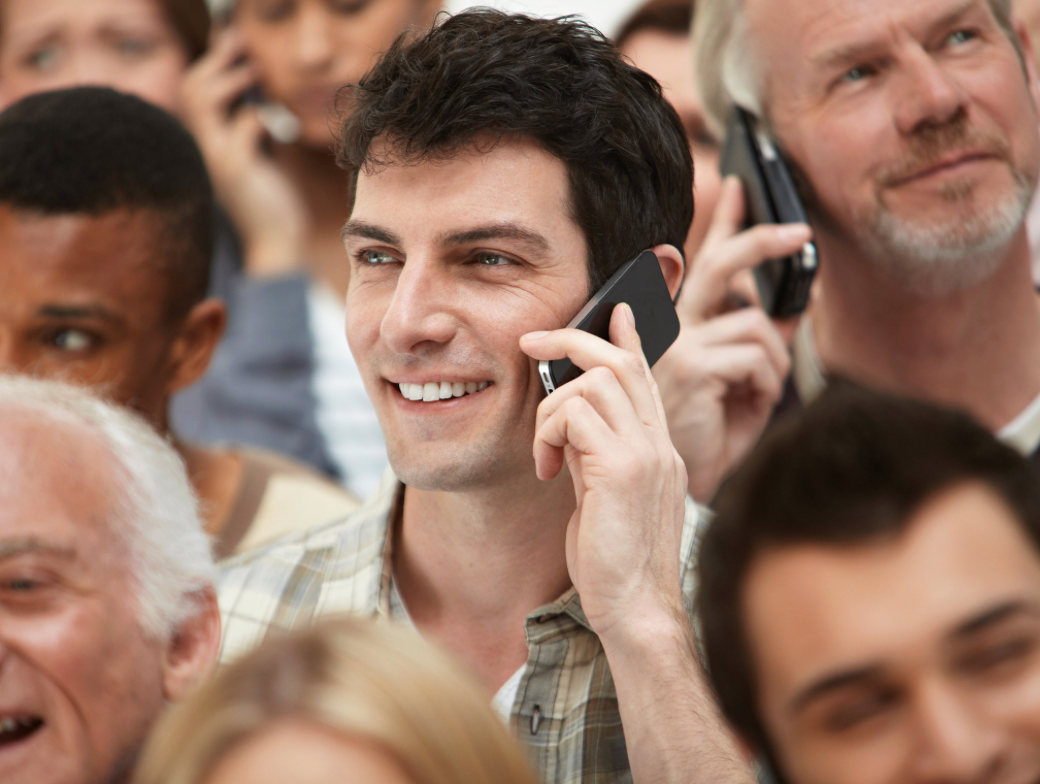 Maybe I’m getting cranky.  Maybe New York is getting too loud in general or maybe, just maybe many people have lost all sense of personal space, privacy and the use of their indoor voices while indoors and on their phones.

It’s not a new thing, but it seems to have gotten worse.

I want to own the fact that I am a loud person.  I also, according to my family, have the annoying habit of yelling through walls when I want to talk to someone at home.

Glenn constantly asks me if when I was growing up my mother and I ignored rooms and just yelled to each other through the walls.  And I have to admit that we did.  There were only the two of us and a gaggle of dogs. If we had something to say, why let a wall or several rooms stand in the way. So, we would just yell, and the other person would yell back and thus we conversed.

I find it very frustrating when I yell to people in the house now and I am met with silence.

However, I do not yell on my cell phone. Nor do I speak on it in public very often and if I do, I have the manners to speak softly and if it’s a real conversation I take it outside or to the ladies room.

But I seem to be in a minority.

Last week my friend Donna and I were having lunch in a small restaurant. The guy next to us was shouting on his phone. I mean shouting. Like he was rooting for a football team in the final seconds.

There was some mix up with a hundred and fifty- thousand dollar wire transfer and he yelled every detail of the transaction. It was impossible for Donna and me to carry on a conversation.

It was impossible for the waiter to deliver Mr. Loudmouth’s food as he was so engrossed in his dilemma he was staring at the table while he yelled. I kept trying to get his eye, but he would not look at anyone, he just continued to shout his personal financial details into the phone and stare at the table.

I finally could not take it any longer so I knocked on his table like it was a door and said, “you are shouting and the rest of us can’t talk.”

He then shouted into his phone, “Am I shouting? The lady next to me said I’m shouting.”

Once his conversation ended he started scarfing down his asparagus and he never bothered to say sorry, or make any type of acknowledgment that he might have been annoying the room. Instead he started talking to the English couple next to him where in the same baratone he regaled them with his stories of the best years of his life – his time at Harvard.  If he said the word Harvard once he said it 40 times before his dessert arrived.

Now I have a thing about adults who are more than ten years out of school and have the tick of slipping in their alma mater into every conversation.

He prattled on about a guy who he went to Harvard with who happens to have just married a friend of mine. I heard about the girl who he has loved since his freshman year at- you guessed it – Harvard – who has been in love with four men but never him. I wonder why?

I know he hates the work of Jeff Koons and how he attends an art fair and what how he selects art.

Let’s say I know too much and not because I was listening, but because he made it impossible not to hear.

And let me add I am an avid eavesdropper. I love to hear a good conversation I’m not a part of, but less and less as every conversation now seems to have gone public.

We had finally had it and left just as he had moved onto his favorite restaurants in Italy.   SHUT UP!!!!!!

A few minutes later I heard a guy on the street yelling into his phone and telling his mother to go fuck herself because she would not give him something.  He had passed by me before I heard what.

Going down in the elevator after the gym I heard a woman making her lunch plans and why she did not want to go to certain places.

You are in an elevator. It’s not your world. You are annoying everyone around you. And then when they’re a lot of people all on the phone, it’s like being stuck in a cage with a bunch of mina birds.

Last evening was maybe the most annoying noise assault of the week. Glenn surprised me and took me to a very lovely restaurant called La Grenouille. For those of you not in NYC La Grenouille is a very old school French restaurant. It’s so old school, it might be on its way out. But, it’s still a gorgeous room, with the prettiest flowers in town.  The wait staff is French and speaks in whispers. It’s the kind of place if someone in the back room sneezes; you hear it in the front room.

It’s the kind of place where you speak in hushed voices and if you know right from wrong, you dress nicely. Don’t get me started on the mother/daughter who were in sundresses with flip-flops.

But it was the guy next to me (and next to you there is really next to you) took a call and proceeded to yell into the phone for a good four to five minutes.  It wasn’t forever, but it felt like and it was so not the place.

He also never looked up when after his yellathon ended and said sorry, it was a business call. Which even if it was, and it sounded to be such – GO OUTSIDE. Go to the men’s room. Get up and have some respect for the people around you who might not want to hear every detail of your life in a voice that makes it impossible for them to hold a conversation themselves.

We need our phones and we need to talk on them. But there has to be some civility to it. Like with everything else these days, balance is the key.

My favorite way to speak on my phone is to have it on speaker and not hold it up to my ear. Must harken back to yelling to my mother from the next room. But I only do that at home. Though I have heard people do it in public.

If someone calls me and it’s not one of my family, my agent or my mother I don’t take the call if I’m with people. And then I ask if it’s an emergency or can call back. And if I have to talk I whisper or leave the room. I’m not perfect, but I understand nobody wants their life interrupted by the details of mine.

If you are in an elevator, wait until you get out. It’s just RUDE. RUDE. RUDE.

And if you ever go to La Grenouille, turn off your phone and  please do not wear flip flops;  it’s insulting to everyone who goes there and makes an effort to look nice and everyone who works there as well.