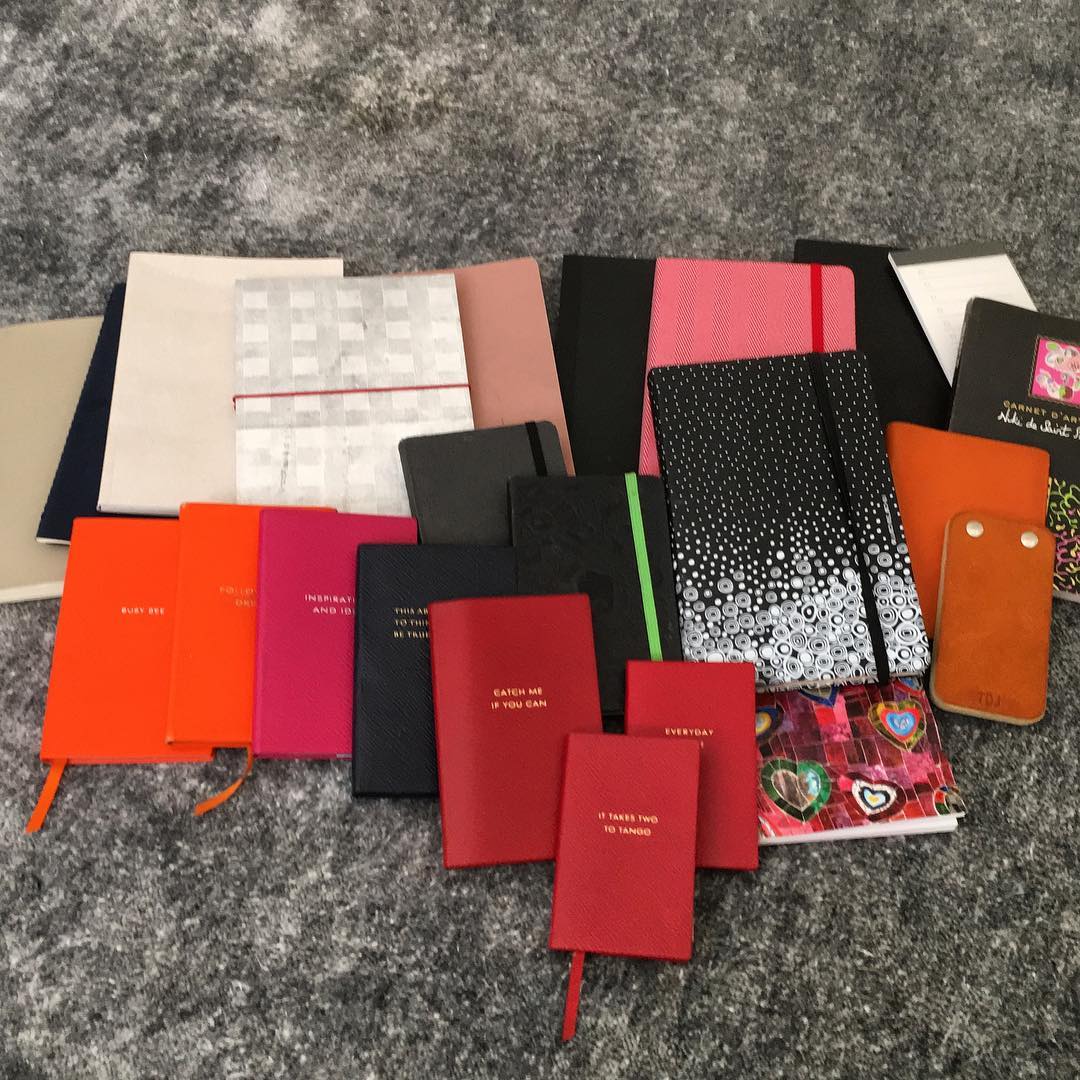 The consensus would be I have enough notebooks to get me through the year. And the sick part is I have more at my office. And they're all empty. #notebooks #hermes #Smythson #writer #traceystopsshopping

I NEVER PLANNED ON THIS

I am now in the third week of my year-long non-shopping experiment.

Experiment makes it sound like I’m in a lab surrounded by petri dishes, wearing goggles while trying to figure out some molecular structure. When in fact I’m merely walking up and down Madison Avenue, passed the world’s great shops trying to quell my anxiety and not rush in and make some random purchase.

It’s not that bad, the anxiety. It is sometimes. Sometimes it’s rather overwhelming and in those moments, I realize that my drug, my dopamine, my tranquilizer for forty-five years has been buying stuff.

While I always gave lip service to toning it down, a diary entry I found from December 29, 1982 states, “I’ve really got to stop shopping.”  And there are decades of entries that reiterate that same sentiment.

But I never would have said I’m not buying anything for year. Are you crazy?

I am not nor have I ever been a hoarder.  But I never understood how much we hold on to unknowingly until I read Marie Kondo’s the Fine Art of Tiding Up.

It instantly became my bible.  I read it through twice before I started trying to follow her KonMari approach to life.  More on that later.

I even went and heard her speak. My friend the author Clay Rivers and I went off to the Barnes and Noble when she was in town.

I was interviewed on Japanese TV as I was carrying the 15 copies I had bought.  I’m the one who goes to a decluttering lecture and buys more books than anyone else.  But they were all gifts.  And if you don’t believe me ask Clay.

But Marie Kondo turned out to be the proverbial tip of the get rid of stuff iceberg.

Marie believes in getting rid of clutter to make your life easier and tidier. She feels we hold on to things for the wrong reasons and she is right and she has become a rock star based on her theories.

After two years of doing my own sort of KonMari (Marie’s formula for chucking your possessions)  it was more of a TraceMari, I found myself reading a book called “goodbye, things” by Fumio Sasaki.

Kondo is a professional tidier. She goes to other homes and helps them discard ¾ of their lives. She talks about what she does for them.

Sasaki is a single guy who lives in Tokyo who decided to get rid of things in search of a better, calmer life. His book is more of spiritual journey. He doesn’t teach you how to fold your underwear into origami like shapes.  He explains how he found his better self  once the crap was removed from his life.

It’s been a weird couple months for me.  I’m at a crossroads.  I’m used to this.  I find myself in this spot at the end of every decade. But this one is big.  While deeply close to my girls they are on their way out. Taylor is gone. She’s here a lot, but she is getting married.  And I am thrilled for her.  Lucy is off to college in fourteen months, three days, two hours, four minutes and eleven seconds.

I don’t have a job. Not an official one.   For the first time – wow – in eight years I do not have a contract to do something.

Unfair, I had three months last year when I wrote my pilot when I was on my own. But as soon as I wrote the pilot I sold it.  It kept me busy for over a year.

I took it far for someone who had been out of the TV game for as long as I had. But at the end of the day it did not go to network.

And I was unceremoniously told I was too old to write on someone else’s show.Which I honestly never wanted to do when they were offered to me. For the 20 years, I was the right age I refused to do it. But suddenly it sounded like a good way to stay busy when Lucy goes to college in fifteen months, three days, two hours, four minutes and eleven seconds.

So, here I find me, eleven months from 60, the age where American says you are officially a senior. But I feel the same way I did at 40.

I have an idea for a pilot, but it does not thrill me. It has not taken hold like a barnacle which is what I need a self-generated project to do to get me to actually write it.  If you are throwing dollars at me I will write whatever you want, but if it’s on my time, the characters must start living inside me24/7.

And I don’t really have a next book. I do have one.  I play with it. But I’m not sure its’s my next book

So, I’ve been undergoing my own crisis which started around the time Donald Trump was elected.

But time has taught me to sit still when this happens and if I’m quiet and not frantic my next move will make itself known.

Neither silence nor stillness being my strong suits, this does not always  go so well.

And then in April, Glenn and I were flying back from LA. I had spent three days deep in the land of Sasaki and his 215-foot pad in Tokyo with his 30 possessions. I put the book down and told Glenn, “I’m not buying anything for a year.”

I think he thought I’d had some sort of altitude induced stroke.

‘I mean it” I said.  He still didn’t believe me. I think he thought it was a wacky idea that would pass and I would just go home KonMari his closet and give away some more of his LaCoste shirts.

But I did mean it.   I’m going through a difficult, yet important, transformative time in my life.  And I want to do it without my lifelong pacifier shoved in my mouth. I want to see who is on the other side of the shopping. Who lives there, without the flow of stuff coming in and stuff going out?

What does that person do with her spare time?

I am fascinated by the minimalists, though I could never be one.I am intrigued with the people who choose to live in little houses, though I have no desire to live in a doll’s house.

I think there is a fine place in between and that is what I am searching for.

I want to see if I too find a similar peace that Sasaki and the minimalists find when I’m not stuffing my feelings with stuff.

It’s not easy.  Trust me. I have broken down several times. I have slipped up, not in a big way, but tiny ways.  Twice.

But, for the most part I’m doing it. And it’s hard. Not shopping isn’t the hard part.  It’s the not shopping then the sitting with the anxiety. Then I need to remind myself that is the whole point of this.

Featured image is only part of my empty notebooks. I have more in my office. I need to give some away. But I do use them and I figure they are my journals for the next several years.

If you want to start slowly unloading some of your stuff. Download today’s planner and take a baby step.