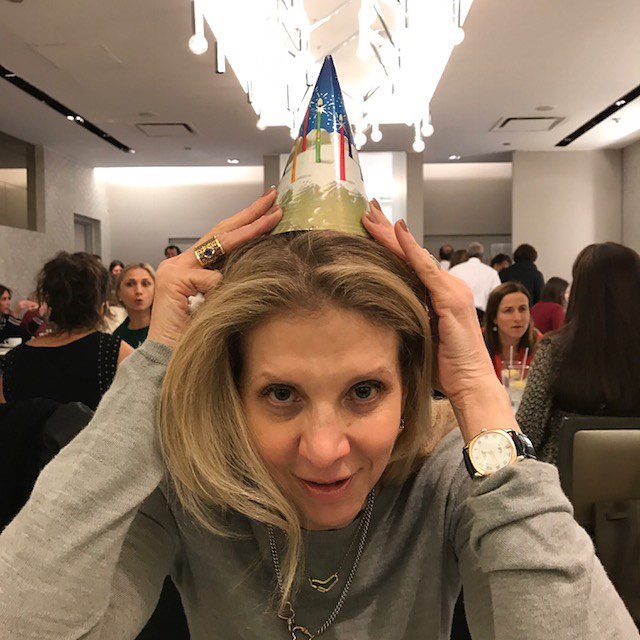 Only a good friend brings you a silly hat to take you out for birthday lunch. @bergdorfs with the funny, talented writer #lindayellin

I had  lunch with my friend Linda today. She took me to Bergdorf’s in honor of my birthday.  After she made me put on a silly hat she gave me a bag of gifts for the girl who stops shopping. She gave me a silly little purse, she said was so ugly it was to be immediately purged.  She gave me a wand to wave around if I felt like buying things that would give me magical powers so I wouldn’t shop. I guess she thinks I need magic to make it through this.   And then she gave me  a t-shirt that says, LOVE, PEACE & BOOKS. These are the things she wishes for me in the new year.

She is such a good friend.

Then she said,  “you know it’s like only sixty hours.”

Deep breath, hadn’t thought of it down to the hour.

Now if I was in a panic I would have jumped up and gone and bought a bunch of make up for no reason. I did not do that. I did that later in the day with Lucy.

Come on, I’m in countdown here.

It feels like I’m going in for surgery. A shoppingdectomy, my shopping gland is about to be removed.

I think I’m OK until I actually think about out how long a year is. Last night I was thinking about Christmas and I realized after Christmas I would still have almost six months to go and that got me a little wound up.  It got me a lot wound up. It got me so wound up I went online to plan our Christmas trip. I started buying plane tickets. You see how this disease plays out?  I could not sit with the panic of the thought of a year without shopping  so I had to think about a treat to get my mind off the fear.   I had to press the pleasure button.

While a year is long I must say I have prepared and I will say again, if you embark on this you need to really plan it out. I know of several people who stopped shopping right away when they heard I was planning to stop on May 12th. I don’t think that is a good idea. Give yourself time for lift-off.

Remember I literally gave myself a full month of prep and purge. Sounds like a colonoscopy doesn’t  it?  Wonder what will be worse?  Not shopping I imagine.  Colonoscopies are over fast and you get those good drugs that knock you out.

Anyway, back to the prep.

I made a list of all the things I thought I didn’t have or might need or might flip out if I didn’t get in the next year. Not all the things, just the crucial ones. The ones crucial to me. None of this is really crucial. It’s only crucial because I make it so.

But, I really thought about it.  While I was purging, I was planning.  And I did not buy randomly.

I knew I needed a navy -blue bag. I looked at every one in the city and online. I narrowed it down to two. I bought them both, knowing I could return them both. I sat them in my room for a weekend – side by side until I decided.

I  need to get exactly the right things or I will set myself of for failure from the start. And  so will you if you don’t pre-plan how you are going to go about it.

While I do buy clothes I tend to buy the same things over and over, sweaters, black pants, jeans.  I have sort of a uniform, at least in the daytime.

I do not just buy dresses for the sake of buying dresses. I never say I’m going to get a dress. I don’t think in terms of dresses. But, then an event will come up and if I need one I will get a dress.  Often, I wear the same thing many times when it comes to fancy dresses.

I’m aware that during 12 months the chances of my needing a black tie or fancy dress are very high.

So, I got a dress. I do not want to be caught in a situation where I need something special and will then have to buy it.

It took me three weeks of looking to find the right dress.

And then I narrowed in on a dress and I kept going back to the store to make sure.   Tommy, who worked there and was taking care of me was endlessly patient as I returned and looked at it and tried it on, brought friends and the daughters in to give their opinions. He gave me endless bottles of icy Pellegrino while I stared at myself from all angles. He was beyond sweet and kind.

And oddly I ended up not getting the dress I thought I wanted but one Taylor found the day I swore was my last day of torturing Tommy.

She told me I looked fat in the one I wanted and found one that was much more appropriate.

I instantly knew she was right and said, “ I’ll take it.”   Something I will not be saying for 12 months.

Tommy had the seamstress in there to alter it so fast I didn’t have time to change my mind or say I will be back tomorrow.

Point is when you know you are only going to get one thing like that for a long time you really think it out. It means a lot. It was like buying a wedding dress.

And speaking of weddings Tommy is marring his boyfriend on May 12th!!!

I wish you a life of love and happiness Tommy and very few clients as indecisive and annoying as I was over the red dress.

Just not for a year. But I I will totally come by to say hi.