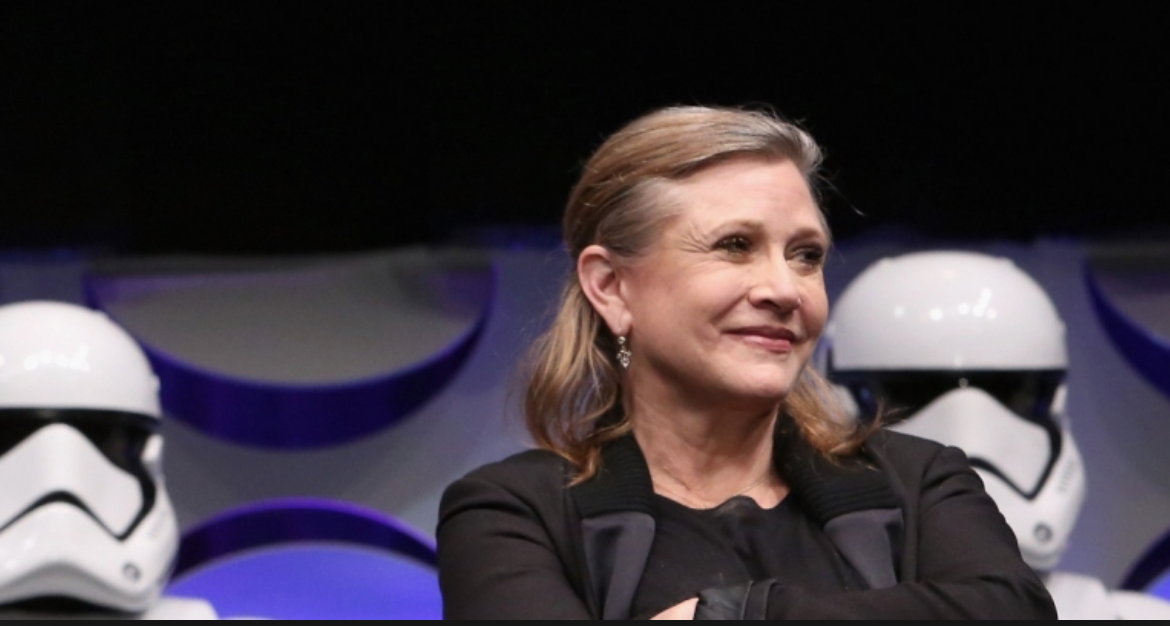 THE BATTLES OF A PRINCESS

I wasn’t planning to blog this today. I was planning to share lovely pictures of the resort we are at in Mexico.

But ever since noon, when I found out Carrie Fisher passed away I have been unable to think of anything  else.   I cannot let her death go by without writing about it.

Anyone who has followed the news since Friday knows she had a massive heart attack and was on life support.  If one read between the lines of the Tweets, it did not look good. But somehow despite all the ups and downs in her life, the idea of Carrie Fisher dying at 60 years old is oddly unfathomable.

When I woke up from my morning siesta and read the news I started to cry. Which surprised me and surprised Glenn even more. He said “You didn’t really like Carrie Fisher. ” Which is not at all true. I was jealous of her.

I did not know her well. I knew her a little. I had been to her house once.  And she sort of knew me.  There was a time when she knew who I was, then I imagine a long time when she totally forgot.   And then my guess is after Shopaholic she knew again, but I doubt she really cared.

I used to say that for three quarters of my film career I always felt that every job had, I was one phone call away from being replaced by Carrie Fisher. Which  for the most part was true. And if I wasn’t going to be replaced by her then she had already passed on the project I was on.

In the years I wrote films all funny female films went to her first. Her or Nora Ephron.  But Carrie took on more work, she attached herself to a lot.  She punched up many scripts. She started many projects, some she finished some she didn’t.

But she was Hollywood royalty. She was razor sharp and deeply funny and the work was hers for the taking or the rejecting.

And I would be lying if I said I was not jealous many times, upset at others.  There were times when I was likely angry about it.

Not to mention all the cool people who I wanted to like me and might have been my friends liked her much more. I’m not lying here. That is the truth.

I misguidedly felt she had a hunk of life that belonged to me, or if it didn’t belong to me, I wanted it. I  deserved it. I  was being denied it. Because somehow I felt Carrie got the whole pie and there was none left for anyone else.

Which of course she did not.  Because that is not the way life works. The pie might have been hers, but her demons often prevented her from enjoying it or even finishing it.

I’m not speaking out of school, the bulk of her published work, perhaps all of it hysterically and  tragically depicts the personal hell she lived suffering from Bi-Polar disease and addiction.

She was brave and fierce when she wrote about it.  She was transparent and honest and funny.  She allowed us to glimpse into the hell that I for one thought was composed mostly of fun and paychecks.

After her one woman show Wishful Drinking I had an entirely different take and respect for her. And I stopped wanting to be her.

And then getting Confessions of Shopaholic helped. But I think think that came first. Of course when Jerry Bruckheimer bought the manuscript before it was even a book she was put on it immediately. I don’t think any other writer even saw it.

Cause that’s the way those things went.  She was in a down period then.  I think she took on things and due to the nature of her illness did not know when she would slide into the dark zone and would be unable to tap into the muse and finish them or do a really good job.

So, the script went back out in search of a writer and I set out to get it. I have never worked so hard to get a job in my life.    Not just because it was the biggest book of that year, but because I wanted to prove I could do it. I could tackle a script that had been hers and make it work and get it to the screen.

Am I proud of those feelings?  I don’t know. I think they are sometimes what spawns us  on, makes us get out of bed, do the four hundredth draft. I don’t know that healthy competition is a bad thing. I’m not sure how healthy my one-sided competition with Carrie Fisher was. But it made me work really hard for many years.

I did 18 months on that movie. I of course was replaced by someone else after a point, cause that is the way those things go. But I got first credit. That was a big deal for me. Then the movie didn’t do so well and that wasn’t so good for me.

And by then I had a lot of empathy for Carrie Fisher.

Because despite getting trampolined into the white hot center of celebrity at a very early age and despite her undeniable talent she suffered horribly most of her life and who could have anything but empathy for that?

The jealously was my problem, my issue of never feeling like I am enough, feeling like I never really got the fame I felt I deserved, my projecting onto her that she was in some way standing between me and something I never quite attained.

And then after I wrote Gratitude and Trust, after I understood addiction from the inside out, after I understood that the brass ring of Hollywood success was not going to bring me peace and happiness, but I had found it years before in my family, my kids, my husband, doing the work I like even if I wasn’t a household name. Then I was able to totally unshackle myself from jealousy of any kind. And I could just be grateful for all I had accomplished and all the things I had.  And be grateful that for whatever reason, I was spared the diseases of addiction and depression.

And of course by then we were both “older women” by Hollywood standards.

Yet she seemed to get a big third act with the release of the latest Star Wars films.

She has a new book out. She was now famous for being a survivor. She survived Hollywood, she survived her addictions. Thanks to her lineage, to Star Wars and her own talent and perseverance in the face of depression she had achieved major stardom again.   And I’ve heard from people while she still grappled with demons she had them on a tighter leash and was experiencing happiness. And I was not jealous at all. I was happy. Good for her. A sixty- year-old woman who had survived so many valleys and generously shared them with all of us!  I really liked her for it.

And then she died. She was coming home from filming episodes of Catastrophe in London.   She was on a book tour for her new book Princess Diarist.  She was coming home to spend the holidays with her family.  And on Friday one hour after our plane landed at LAX, her flight did too. Only she had suffered a massive heart attack in the last fifteen minutes and apparently lost consciousness for over ten.  And my guess is she never came to again.

As clichéd as it sounds – every moment is precious because we never know.  One minute the heart is beating and the next it’s not.

Is there a lesson in this?  Enjoy every second. Corny as it sounds.  Don’t waste time on jealousy as you never know what someone else’s life looks like.

After I stopped crying I went out and joined my family on the beach. I swam in the sea. I was grateful for all I have had and continue to have and I was so very sad for her daughter, her mother, her dog and her friends and fans.

Good-bye Carrie.  We were not close. You made me better at what I did and for that I am grateful. You were brave and funny and even though we were not friends, I will miss you.