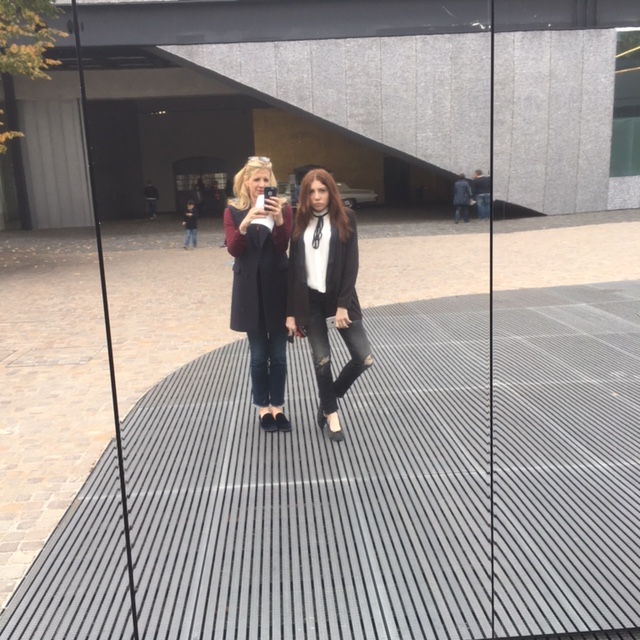 WHEN THE CAT’S AWAY THE MICE WILL EAT CHEESE

Glenn left for the South Tyrol at six am yesterday, leaving Lucy and me 36 hours alone to play in Milan.

For months Lucy has been talking about Bar Luce with oh-so-hip café in the Fondazione Prada.

I have been wanting to see the Fondazione Prada since it opened.  Now, what I was expecting I don’t know. Oh yes I do. Of course I do.  I was expecting the Prada museum, something like the Gucci Museum in Florence. Or the Ferragamo Museum. A wonderful building  full of shoes and bags and sumptuous fabrics and dresses.

Now, if any of you know the Fondazione Prada, you will know I read zippo about it.   I knew the name – I knew it opened. Once Lucy told me, I knew Wes Anderson had designed a restaurant there.

My smart move was suggesting we begin our time there in the café as opposed to afterwards.  Lucy is obsessed with Wes Anderson and clearly Hotel Budapest has influenced more young people than older ones.  The café could be a scene from that set, though the colors a tad too pale.

After carb loading Italian style, we headed to the museum.  What to say?

It’s just creepy. And that’s not the 58-year-old in me.   Lucy who has a high tolerance for creep thought it was creepy.

First off, it’s stark. No. It’s not just stark, it’s like a jail, or some weird internment camp – or perhaps it’s  just so industrial cool it passes by me by a few decades.

You go in and it’s all cement, concrete and steel bars.  Nobody is friendly.  The place is made up of these enormous airplane hanger like buildings, none are connected and you wander from one to the other in search of something that doesn’t make you cringe.

First stop was leaving our bags downstairs.  Now a moment about things I hate. I understand terrorism and the need to stop it.  But there are better ways than confiscating purses. I have walked out of more than one museum before I would hand over my stuff to anyone. Yeah, they give you a key, but of course they too have a key. I took my wallet and my phone with me before they crammed both are bags in one tiny locker. This upset Lucy as she thought hers would be destroyed. So I went back to the girl who had all the charm of a prison guard and asked if she would give us two lockers. Mind you this was in a basement made out of steel bars and poured concrete.

We then went to the first show. It was called KIENHOLZ: FIVE CAR STUD.

I have included the explanation.  It’s made to upset people. And it does. It has a circus theme to much of it despite the fact it’s about torture. But clowns torture me and the combo of clowns with rifles torturing others was just not something I wanted to spend a lot of time looking at.

So we came out into the grey light of the day and there were two little girls doing patty cake in a mirror on the side of a huge building. Lucy said “it’s the twins from The Shining this getting two weird.”

We found our way to the next exhibit which was Bette Saar Uneasy Dancer.  This was a good exhibition and it too was about the repression of people – Africans and African Americans and it was tough going.  We decided the whole place was anti-American in one way. Lucy declared the whole thing Socialist writ large with the exception the Wes Anderson café.

I think if the environment were more inviting, which I know, I know is not the point. Or it is the point.

Maybe TMI – there are bars in the bathroom and when you are in the stalls the lights go on and off at will leaving you alone in total darkness. Now what the hell that was about?  More torture. They also hide the toilet paper. I swear they do. I’m not being paranoid.

The one show we missed out on was the Louise Bourgeois Haunted House. I kid you not.  It existed and we didn’t go. Going would have meant hanging out there another hour sitting on concrete blocks. So we got an Uber and split.

I discovered there is a Gio Ponti church here in Milan. He did not do many churches; this might be the only one. I told Lucy I wanted to stop by and see it.

She typed the address in on her phone for the driver.  She told me it would be twenty minutes. But that was OK. Milan is a big city.  I wanted to see it.

Before long we were on the highway headed out of town. Past the airport. Our driver, a handsome fellow, Renaldo, said it was in the next town. I said I thought it was Milan.  He said Metropolitan Milan is big.  This was all in his broken English and my non existent Italian. Lucy was a good sport as shopping would be the rest of the day and she was not going to rock the credit card boat. Plus, she is used to me dragging her to weird places.

So forty minutes later we arrive in this tiny little suburb – I’m loving it, I love little towns.  Lucy is worried about the Uber bill and what will Glenn say. I said he’s up there making money, who cares?

Renaldo pulled down a rickety lane and stopped in front of an old church and proudly said ‘“Here.”

We got out.  And we were in an Italian version of Tobacco Road. As Lucy said the church looked like half was bombed during the war and never repaired. But there was sort of a repaired part, and optimistically  I said that must be the Gio Ponti part.  But I  knew this was not the work of Ponti. This church was a wreck; it was probably built in the 18th century if not earlier.

I went and got my Wallpaper Guide. No, no, no, this was not the right church. I made Renaldo get out of the car and look.  He agreed. He made us get back in the car and he drove around back. Surely the church I wanted was around back. No. Around back was the decrepit back of the same church.

So Lucy typed in the address again and what do you know, the Gio Ponti was back in Milan ten minutes from the Foundzione Prada!

We just drove forty minutes and were about to drive another 40 to see the wrong church. She was worried I would be upset.  I told her it was fine, it would make a good story and for years we would remember the day we drove for over an hour and a half to see the wrong Church.

So back we went and Renaldo painstakingly found the Ponti.

It  was in a residential neighborhood.  It also did not look a lot like the photo.

It had a big hand written banner across the front. Like you would have on a school the first day of pre-school.  And it had colorful banners flying off it that made it look like a car lot on sale day.

But we got out, surely up close and inside I would see the work of the great Gio Ponti.

Except it was closed – on a Sunday???? And the windows – they were darkened out so you could not see inside.

Lucy felt awful. Not sure why. I found it funny, then she did too. Had the Priest or someone been around I would have told him you do not string colored banners on a Gio Ponti Church and the sign had to go.  And why was it not opened to the public? It should be a museum where the bathroom lights don’t leave you in the dark

We got back in the car, by now we had been in the Uber going on two hours. We headed to a safe place – Sant Ambroues where we eat three times a week in NYC.

Then we walked around the streets that had open shops being it was Sunday and did some retail therapy.

We had dinner at a place that we read about called LadyBu. It has ten or more types of buffalo mozzarella and all the dishes revolve around cheese.  We spent the evening stuffing ourselves with the most delicious cheeses imaginable.

It was actually a great day.

Any day with Lucy is a great day and when you travel it needs to be somewhat rocky at times or it would not feel right. 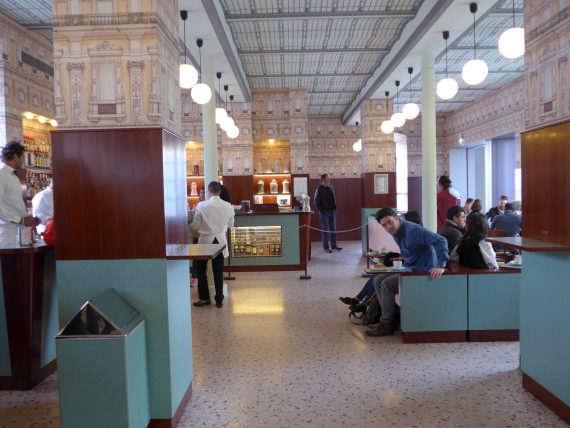 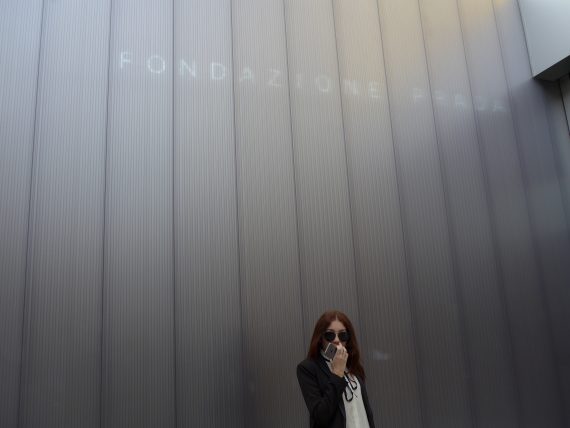 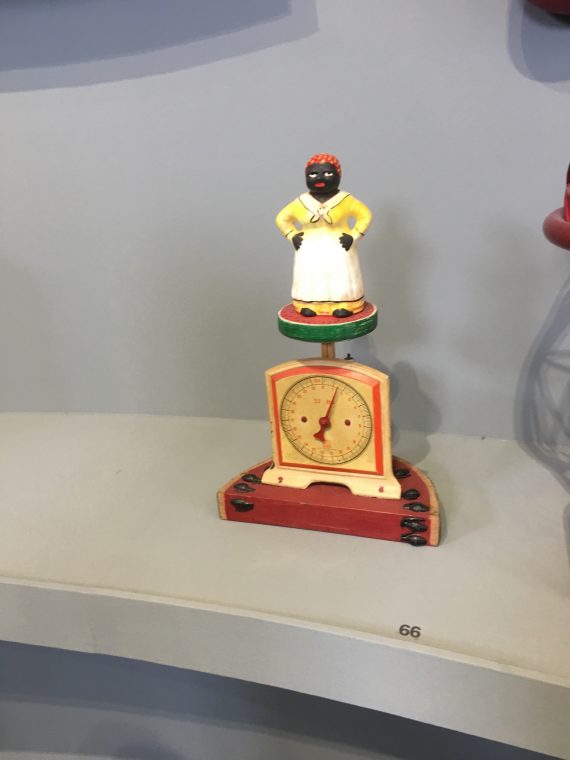 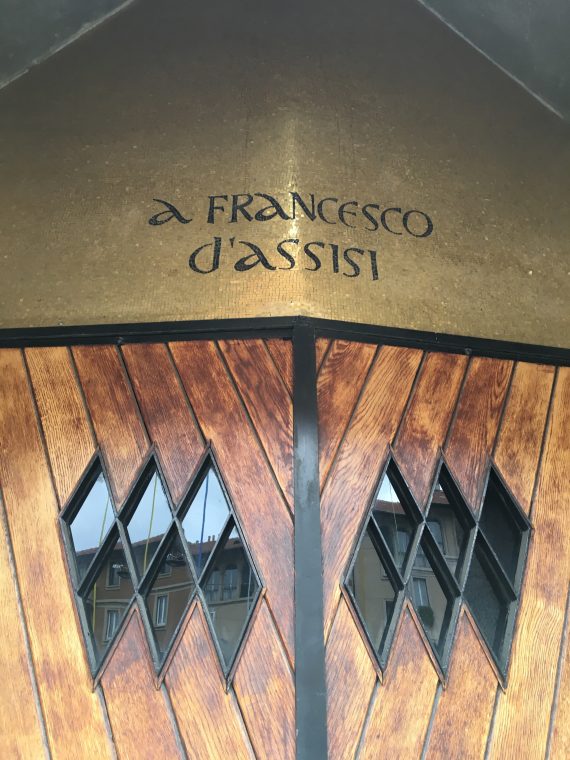 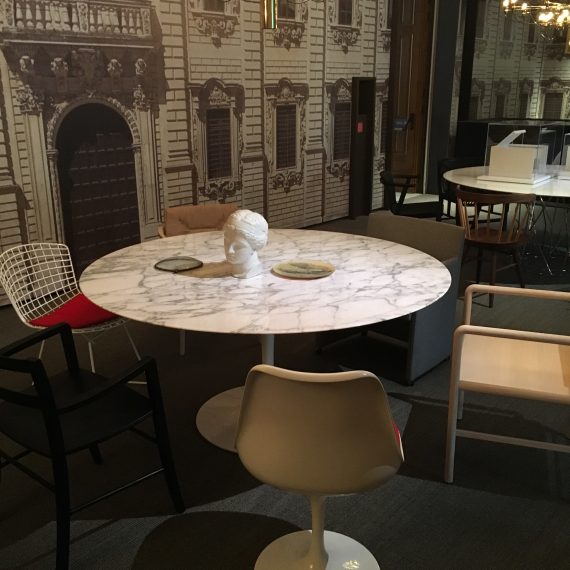 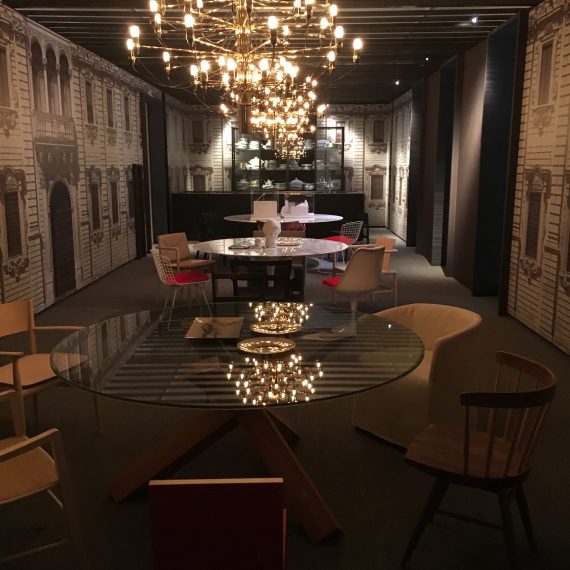 please excuse all typos…woke up late and rushed to get this out.