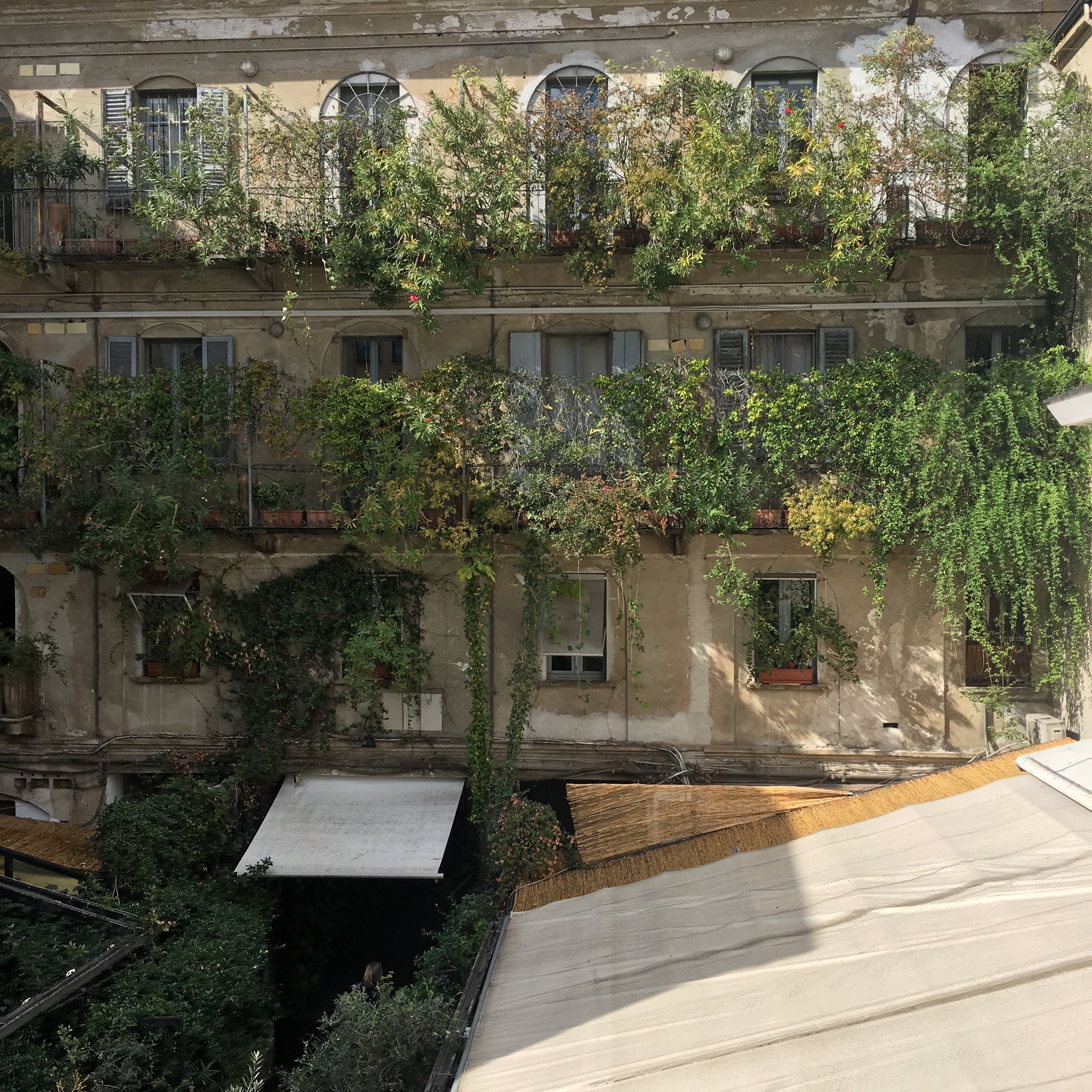 I always make meticulous lists of the things I want to do when we travel. I often buy museum tickets in advance.    I have the names and addresses of stores I want to visit. I usually make restaurant reservations before we leave and I know the parts of town I want to cruise around.

We crammed a lot into four days. And Lucy was a terrific sport – honestly how many chairs should a kid have to look at?

Monday morning, I gave her a chair break.  I took her to 10 Corso Como.

10 Corso Como is always on everyone’s list of one of the world’s great stores.  I always go and I never buy. I love to look and see how they curate and display. I wanted Lucy to see it as she was too young the last time I took her there.

Lucy and I then met Glenn, who came down from the mountain, (makes him sound like Heidi’s grandfather) for a long leisurely lunch.

I am not going to show photos of food anymore. Unless I am able to really take some extraordinary photos of something outrageous, like when we ate the – when Glenn ate the guinea pig in Peru.  Taking a decent picture of food is not an easy thing for many people to do.  I took fourteen photos of a veal chop last night and decided – meh – it looks like a veal chop and not even a good one.  And it was an awesome one.

Anyway – lunch – shopping – that was the day.

I wish I could say we did something culturally enlightening.

Which if you care about such things, is a terrific source for Italian mid-century to modern design.  I was in heaven.

Dinner, no I am not going there. We had fun. No photos. I will say the gelato we got on the street was the best part. OK, I will post a photo of that. 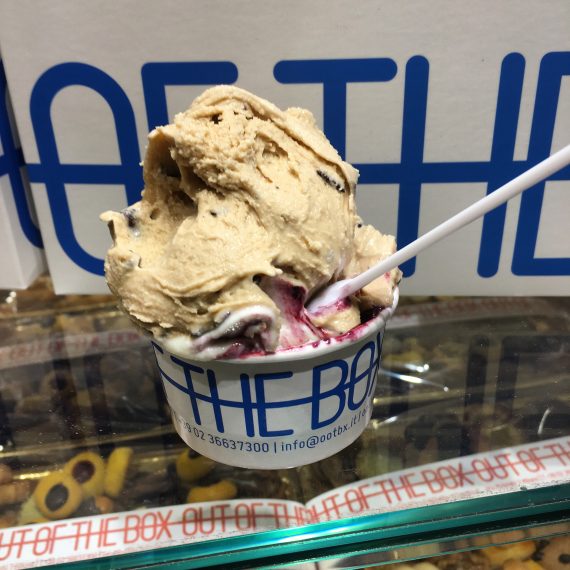 Then yesterday – our last day I demanded we go to the Design Museum. It turns out the chairs I thought were at the Trienalle were actually at this other museum.

Always start with the good. Very interesting building.  The building was well designed and well thought out. The fact it had graffiti on the front means nothing. In Milan EVERTHING has graffiti all over it. The entire city is covered in graffiti.

Churches have it, fancy stores have it, expensive apartment buildings have it. You cannot go a block without seeing it.

So obligatory graffiti.  Ten-euro entrance fee. Which is pretty standard for a small museum.  But this was small. I mean really, really small. Like one room.

And I have to say I was not blown away by what they had. They had some good examples of work by iconic people. They also had some mediocre examples. They also did not have a deep enough collection to really show it and get an idea of what transpired from one period to another.

But despite all of that, the worst part was that many things were in terrible condition.  The things that were in disrepair are not rare things. In fact, the thing that was in the worst condition, a Gaetano Pesce foot is not hard to find.

Right now you can go on 1stDibs and buy  a perfect one for $6,000.  Six thousand dollars is nothing to sneeze at and may sound like a lot to many people and it is; but not if you are a museum. And I promise you in Italy they go for much less. So there is no excuse to show one that is literally falling apart. It’s a 21st century foot not a 14th century head.

The place was also filthy.  Filthy like museums in Cairo – OK not that bad, but bad.  Clean freak that I am all I wanted to do was go by some Windex and clean the Tobia Scarpa glass table and the Alvar Aalto bar.

And the people who worked there, were doing nothing. You know that museum worker kind of nothing?  Just sitting. And now with smart phones they are all just sitting and looking at their phones.

I wanted to say get off your ass and go clean that glass. We did not pay 30 euros to see dusty, damaged goods.  But I didn’t.

Lucy ordered an Uber and hustled me out of there before I had the chance.

Glenn took over the plans and decided we had had enough modernism and contemporary and needed some time in The Renaissance.

So we spent a few hours at The  Sforza Castle:  A giant castle in the middle of downtown Milan.

Right from Wikipedia –  Castello Sforzesco) is a castle in Milan, northern Italy. It was built in the 15th century by Francesco Sforza, Duke of Milan, on the remains of a 14th-century fortification. Later renovated and enlarged, in the 16th and 17th centuries it was one of the largest citadels in Europe. Extensively rebuilt by Luca Beltrami in 1891–1905, it now houses several of the city’s museums and art collections.

We roamed around there and while the Leonardo de Vinci wing was closed for renovation there was still a lot to take in.

They have Michelangelo’s last “Pieta.” The Rondinini Pieta. Not to be confused with the one in Rome.  Story is this one was in his studio when he died. It then disappeared for over two hundred years and then turned up in a palace called Rondinini. Thus the name.

So then it was time for some last minute shopping.  Two more meals.

One truly memorable at a place called Osteria Brunello.

This place is a real to do if you find yourself in Milan.

So now it’s back to work for us and back to school for Lucy and back to Mini Winnie the Mini Dachshund!!!

Damn, I forgot to buy her a cashmere sweater. 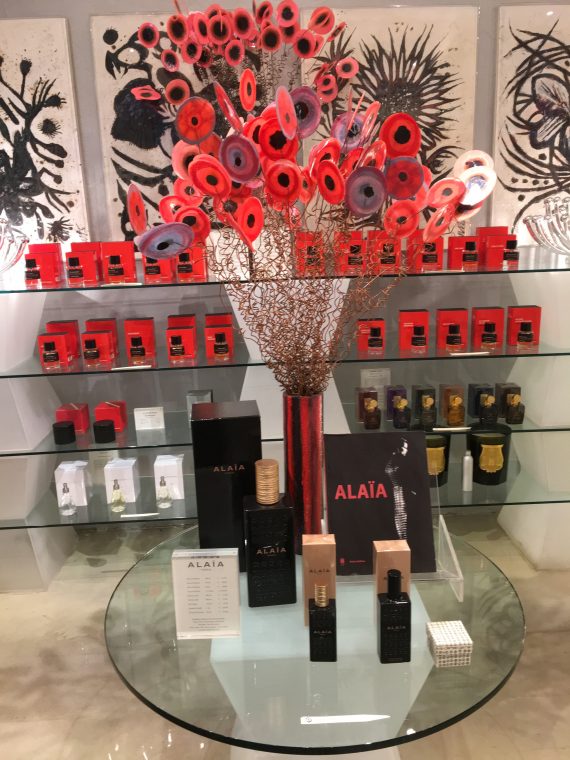 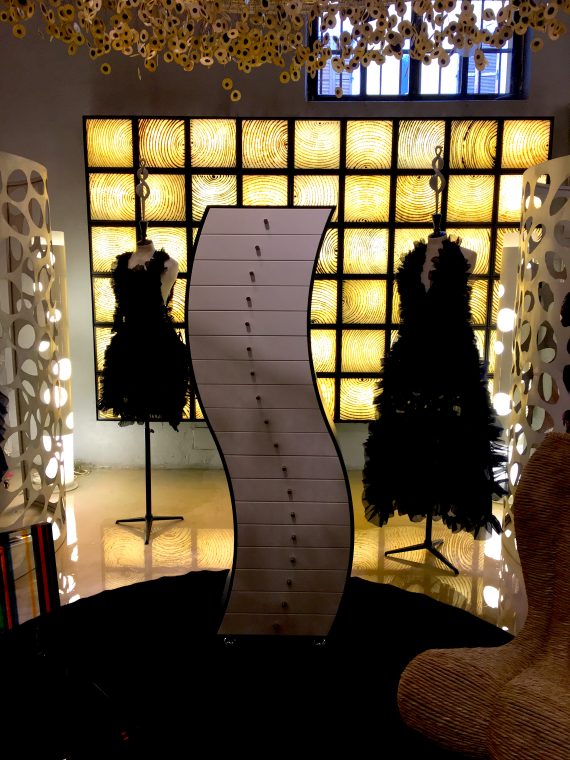 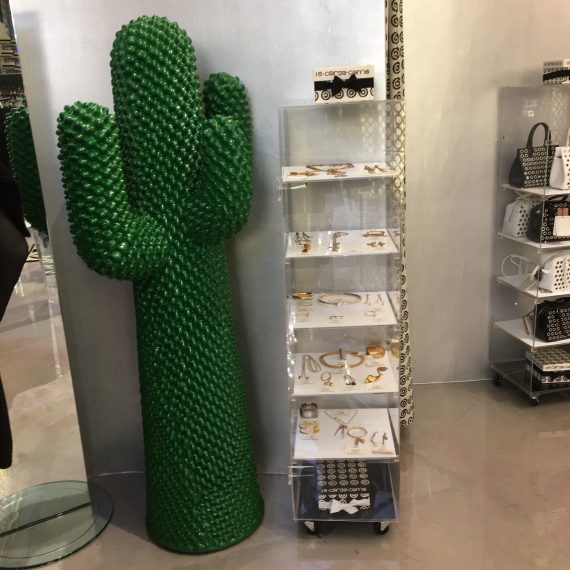 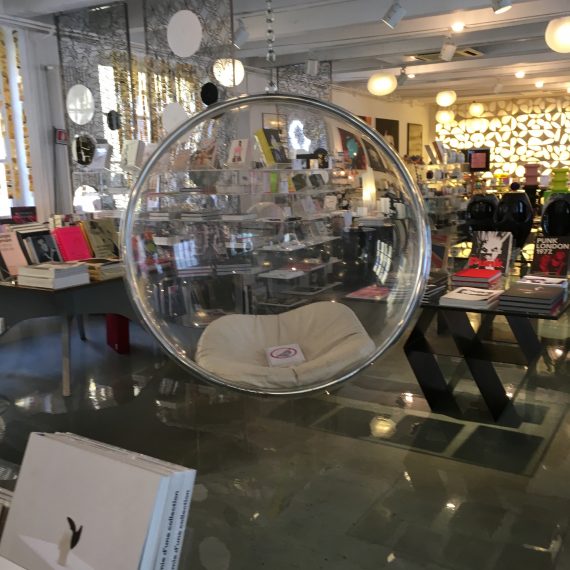 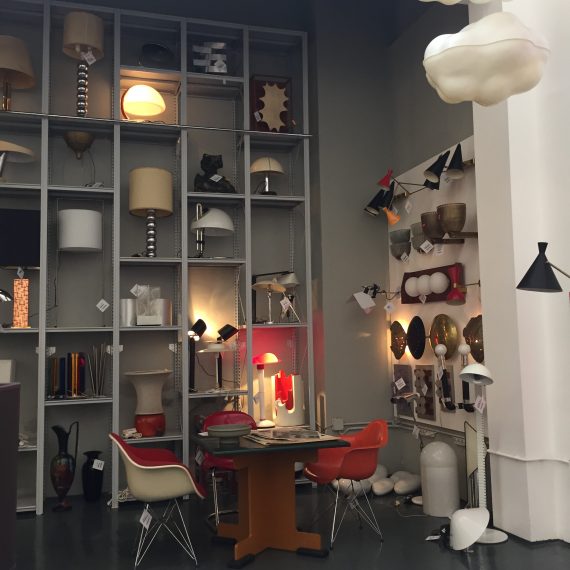 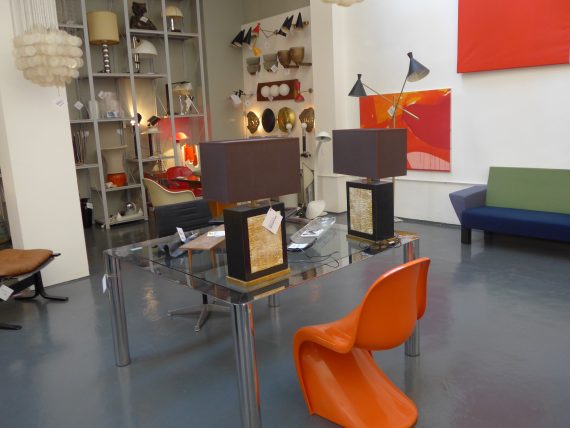 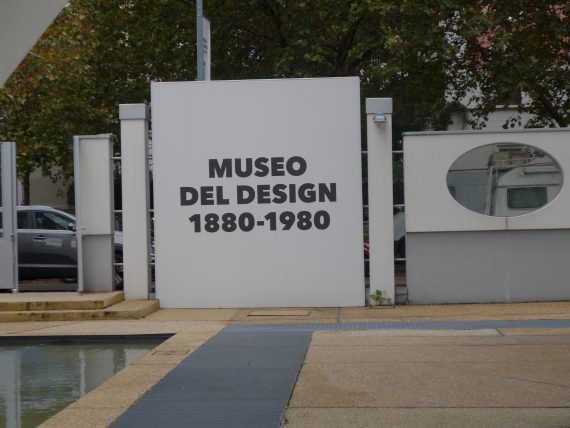 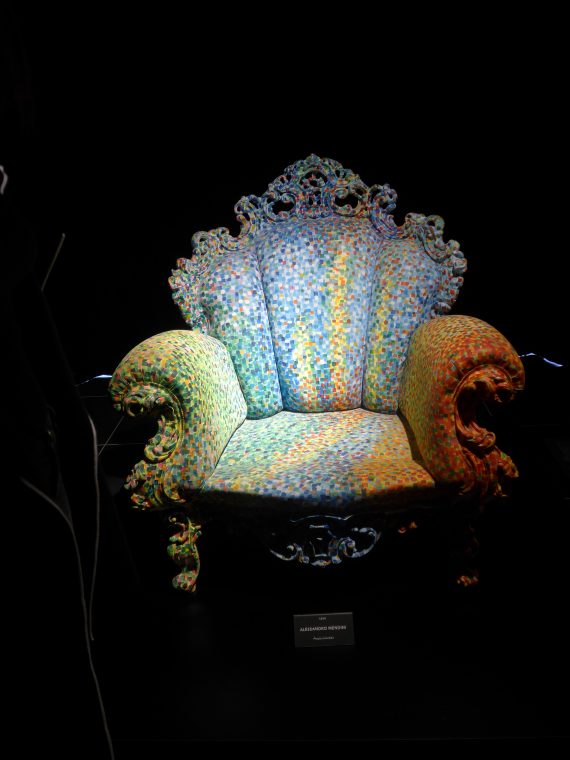 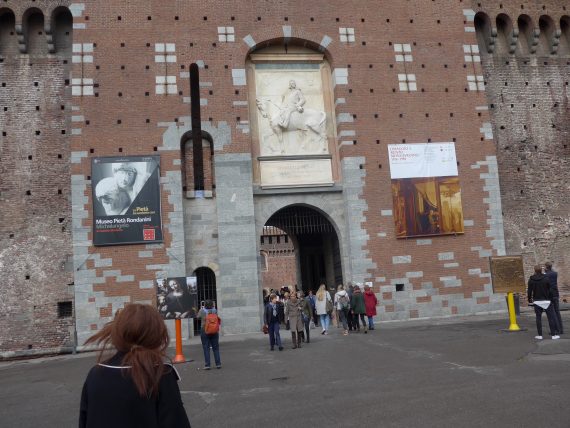 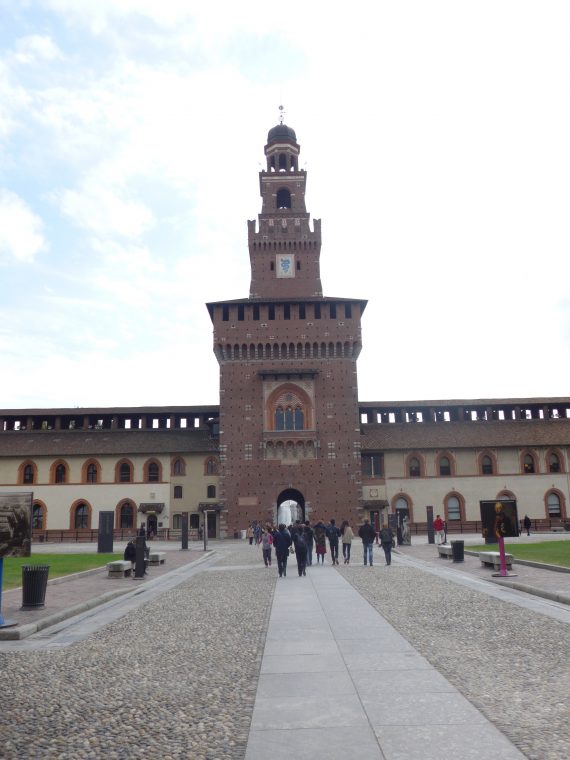 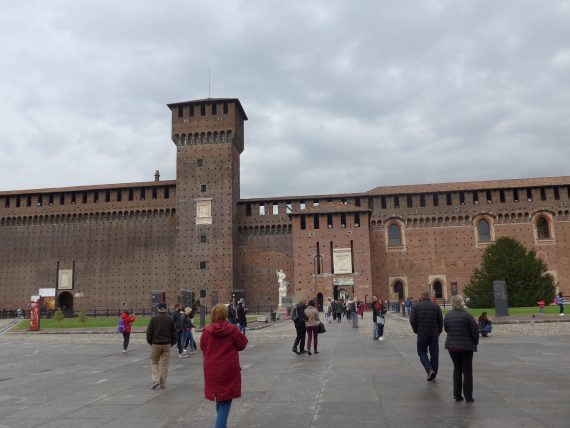 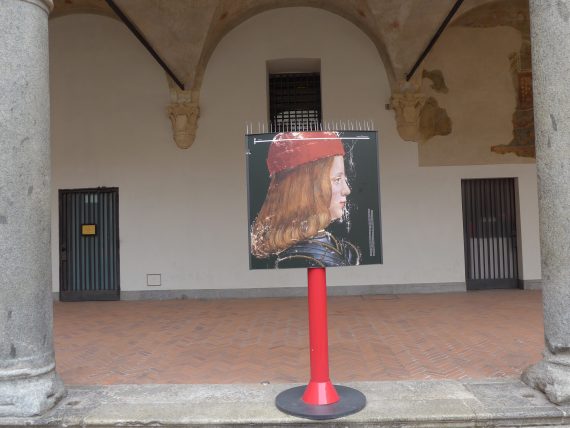 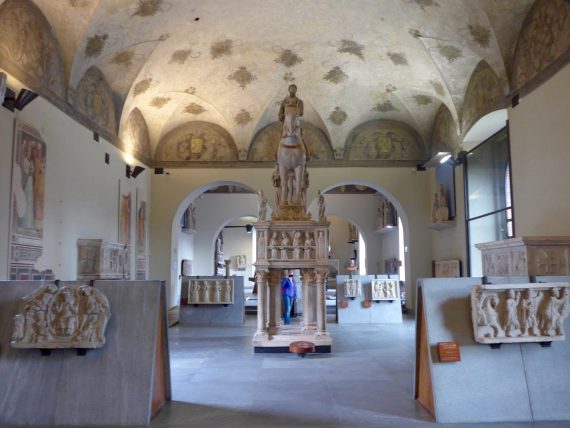 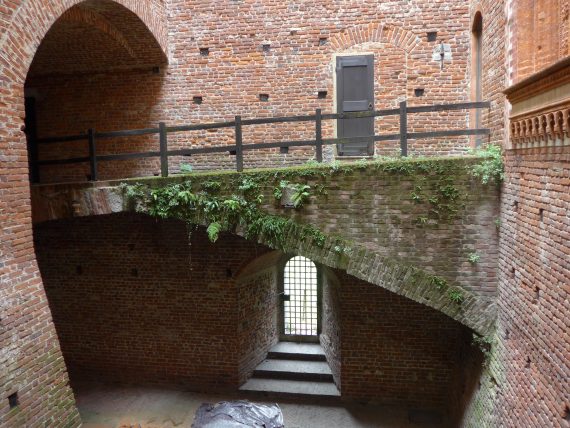