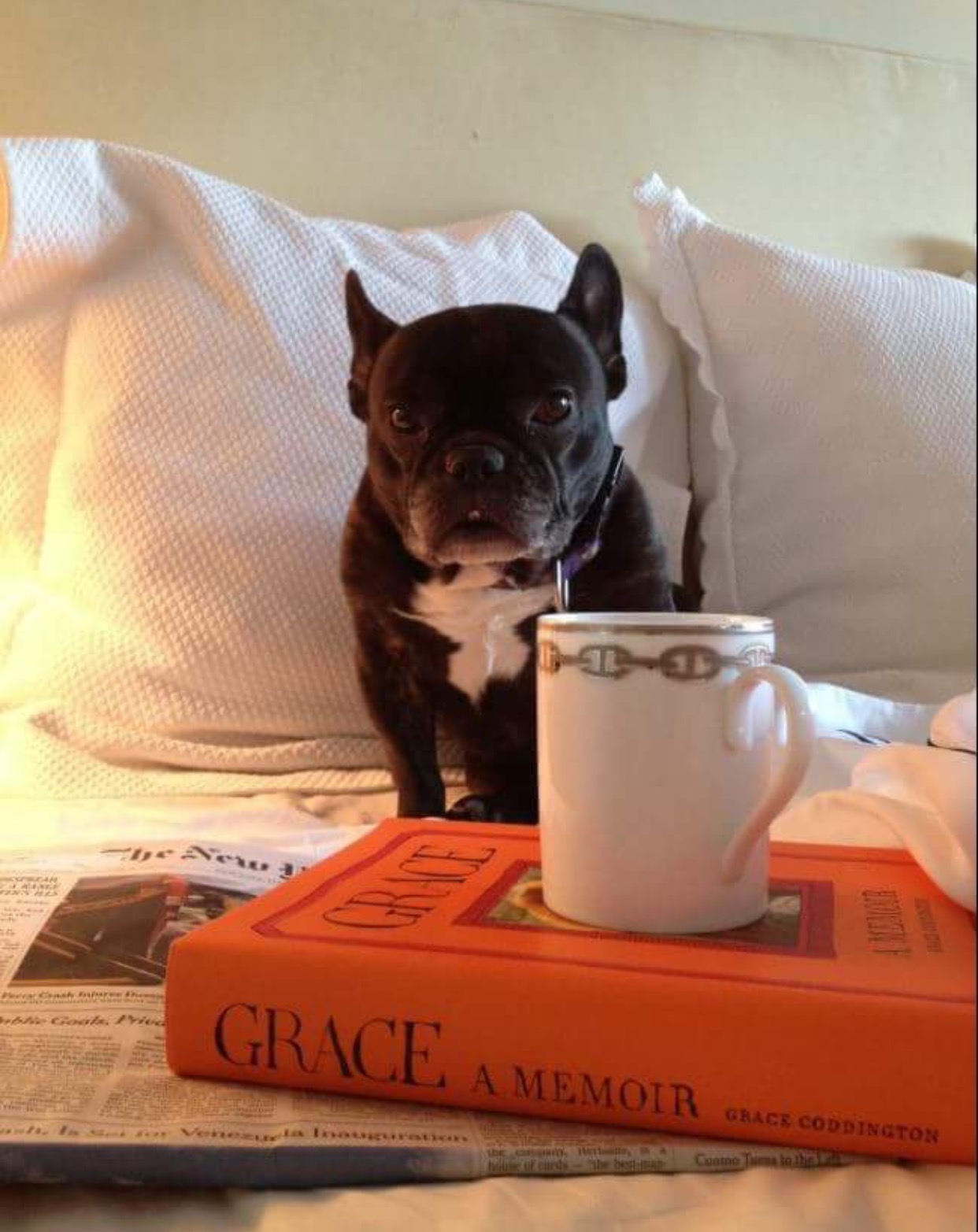 These are the words I have been whispering to my thirteen-and-a-half-year-old bulldog Ramu Gupta for the last three months.

I would say that, and on nights when I was really confused I would say,  “If you’re ready please give me a readable sign.”
It got to the point where I was secretly hoping to walk in one morning and find he had died peacefully in his sleep. That way I would not have to choose.

All my other dogs chose for themselves. They were either so sick there was no question as to the right decision or as in the case of my Japanese Chin Sumo Wrestler, he got sick, went to the vet and never came home.

But Ramu did make it so easy. The last three months’ endless hours have been devoted to discussing with ourselves and anyone who might listen, what should we do about Ramu?

Ramu was not really sick on the outside or perhaps even on the inside; At least not organically.  Not  sick in the way that many of the dogs I have heard about.  “He had terminal cancer.”  “His spleen exploded.”  “He lost both his legs.” “He had a heart attack and was paralyzed we dragged him around in a wagon for two years.”   Dog owners love to share their dog stories.  Stories of life and glory –  tales of death and demise.

But Ramu had Canine Dementia. Taylor diagnosed it about a year ago. It was confirmed by the vet.

His endless staring at the wall or the fridge, his quasi removal from the family, when normally he was right there in the scrum of it all hoping for some dropped food and affection didn’t’ strike us as sick. He slept more, stayed more to himself.

His blood tests were all normal. But he only got worse.  He lost control of his bladder and bowels.  He would howl at all times of the day, but mostly in the dead of night.

And while all of this made living with him harder and harder, it was a price we were willing to pay to keep him around.

The mop became our most trusted household objet.  We are blessed to have dog loving women who help us with the house. We are lucky we live in the age of wee- wee pads.  But it got trying and messy and sad.

Yet, there was no real sign of illness. Nothing that yelled “HIS TIME IS UP.”

And then we would ask ourselves over and over (OK, me more over than most as I am the most obsessive member of the family and the truth is I loved him more than any one else did) is it time to put him down?

He would have really bad days, forty-five wee wee pad and 10 mop up the floor days, that might be followed by a perky day where he played with the puppy and acted fairly normal.

Then the next day he would slide back into his own darkness again.

And then of course there was the matter of his back legs, which had been going for a long time. His show dog stance had been replaced with one that looked like the front part of him was ready for a lap around the ring while his hind legs were sinking into quick sand.

But then, damn him he would get up the steps. “See he is not ready”

Ramu loved our country house. He loved the garden.  He was especially fond of cocktail hour.  For the last 13 years every summer he would follow Glenn out by the pool and join him for his evening drink. I think he enjoyed it more than Glenn.

He would wander around the garden chomping on flowers and leaves.  We would call that “Ramu eating his salad.”  He loved the pool.  But he instinctively knew that he couldn’t swim.  So he would just lower his body down on the cool stones,  stare at the water and drift off into nap land.

Decisions sometimes come in baby steps and sometimes all at once.

The decision to end his life was so monumental and so painful it took us many baby steps to get there.  The first one was we would take him to the country for if nothing else, one last summer of cocktail hours.  He was very into them in the beginning, but as the summer wore on, he became more and more withdrawn and unfocused. He would stumble out the door if we opened it but would then go back in as soon as it was open again. He suddenly forgot how much he enjoyed this evening ritual.

He might look at a leaf, ponder chewing it – but then walk away.

His night time shrieking got worse. He was so anxious he was pawing the floor until his paws bled. But the second we opened the door in the morning, he would bound out and want his cookies.

He was not really helping. How miserable was he?  He refused to declare.

We went back through the tap dance of baby steps, we will take him back to the city, see how he is in October. We took him back to the doctor. We tried three different drugs, one experimental for doggie dementia. One to help with the endless peeing all over.  Nothing worked.

Then last week he stopped eating for a few days.  I took that as my sign, OK, as much as this hurts, he is ready.

But the next day he ate like a pig.  “See he still loves his food.”

It’s a blessing and a curse that we have the power to help a living creature, especially one we love to move on to the next world painlessly.

As the summer came to a close we knew we had to do something.  His issues were impacting everyone in different ways.

The little dogs had to be sequestered as he made such a mess and he also had this voracious thirst and drank all the dog water so they were left with none. They were being punished for his lack of control.

I couldn’t think about much else and his needs and issues seemed to dictate the rhythms of our life in an unhealthy way.

Yet, yet, I loved him so much making that final choice felt impossible and if not impossible at least crippling.

I kept asking for the sign, it came this last weekend from Taylor and her boyfriend Randall, who have the room next to his.

They said from 3 am on the howling and scratching were so painful to listen to it was evident he was in extreme pain of some sort. If not physical, then certainly trapped in some mental torment. They said it was much worse than three weeks before.  Even Taylor’s going in to comfort him had no positive affect.

Glenn did not think I could/would do it. But only I really could, as he was in the beginning, middle and the end – my dog.

So yesterday I called the vet and asked about the process and made an appointment for yesterday at the end of the day with the proviso I could call an hour before and back out.

Once I decided I knew it had to be that day. Otherwise every time I looked at him I would see dead dog walking.

We gave him Kobe beef burgers for lunch. We all sat around and kissed him and told him how much we loved him.

And then at three-thirty he walked out the door and up the steps for the last time. My heart shattered as he tugged at his leash thinking he was going on a walk and I knew I was escorting him to his end.  Maybe he wasn’t ready?

But Glenn, Lucy and I drove him over to the vet where they humanely and painlessly ended his life.

Through the sobs I kept asking the vet if I was doing the right thing. My sign had still not been clear enough. What if I was ending his life a month too soon, six months, a year? What life was he having? As I watched him go from this world to the next my mind was still riding on that same torturous merry – go- round of doubt.

But the vet assured me it was the right thing to do. He was in bad shape. He would only get worse.

Despite that even as I kissed his little face after he had died and told him how much I loved him, I still wasn’t sure.

I may never be sure. I might just live out my years not knowing.

The house is tidy, but empty. He took up a lot of space in sickness and in health. We miss him horribly. We would be thrilled to mop.

He was truly a great little guy. Maybe the greatest.

Thirteen years ago I picked him up at Newark Airport where he had flown in from Kansas City.  A little six-month old brindle Bull Dog. Long before they became the photo op dog for every fashion blogger.

He was scared. But at one point he locked eyes with me, in fact no other dog has ever been able to gaze into my eyes with the intensity of Ramu Gupta. He was like a baby Buddha.  I picked him up in my arms and carried him to the car.  On the ride back home I promised him I would love him and take care of him as long as he was on this earth. I would never hurt him or let him down.

I do believe I kept my word.  I got him to four months’ shy of 14 years old. Ancient for a bull dog. He was never sick a day in his life. Almost unheard of for a bull dog.

And I loved him with all my heart and I still do and always will.

I do so hope I did the right thing.

At least I know he is no longer suffering, though every member of the family is. Especially me.

And I guess that is love and the right thing, we all suffer but he no longer does.

Be peaceful sweet boy. I will never forget you. 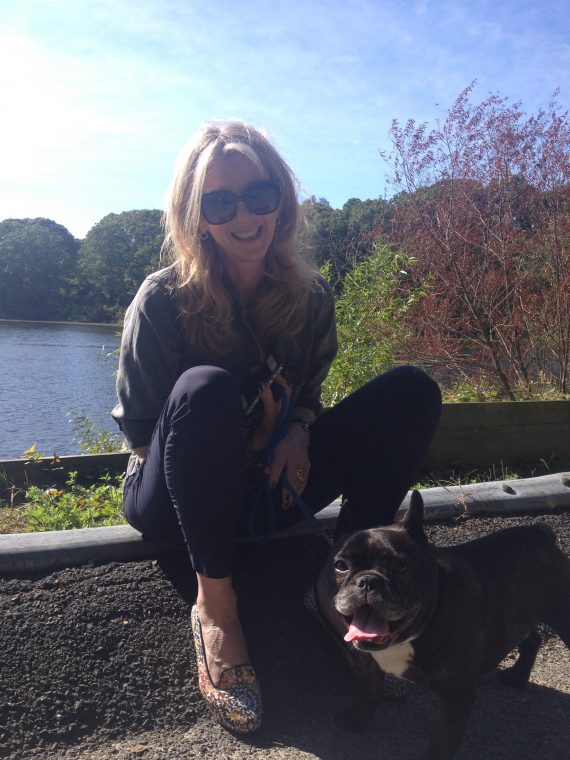