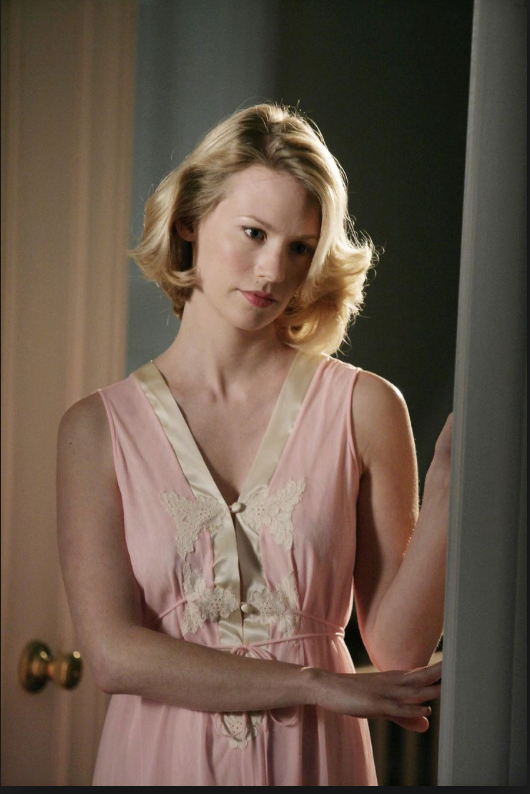 MAD MEN IN THE BEDROOM

By the time you read this we will all know if Mad Men swept the Emmys.

Hopefully, Jon Hamm will take one home. He has been nominated 16 times, 8 for his role as Don Draper in Mad Men and he has never won. He deserves it.

I am a total Mad Man fan. We came to it late. Really late. Like we watched all seven season over two months this summer. And I’m ready to watch them all over again.

There are so many wonderful components to Mad Men, the writing, acting, sets being the biggest part of it. But one of the things that really got to me was the lingerie.  Not the corsets and bras and garter belts that are photographed all over the web.  But the nightgowns and robes that the female leads  wore to bed.

Unless they were having steamy sex on a desk or in a back alley or it was illicit in some way, Betty, Joan and Trudy all wore “sets.”

Sets, something that we haven’t seen since the sixties. Those frilly, flirty feminine matching robes and nighties. My mother had them in various pastels.  Up until Mad Men, I hadn’t seen any since I was girl. I realized how much I missed them.

I actually never had any of my own. By the time I became of lingerie age it was either a t-shirt, something cotton and comfy or the Agent Provocateur slut look.  Sets had disappeared like rotary phones, 3 martini lunches and smoking in planes.

Like most American men Glenn had the hots for January Jones. And he especially loved her in her lingerie and her jodhpurs. But I guess that is another fantasy for another blog.

I liked her “sets” – but go try and find them. They are virtually extinct.  Really ugly new versions exist online, but not in abundance.  Many are worn by Asian women on websites from overseas.  And they look nothing like the ones from the show.   The only ones that look like the originals are original and can only be found second hand. There are some things I will wear “vintage” but lingerie is not one of them.

Then this summer in the peak of my Mad Men frenzy I was at Compliments in Bridgehampton. Compliments is where I buy my bras. TMI perhaps. But who cares.

It’s a terrific shop run by a chirpy gal named Jo. Jo could actually be in Mad Men. But she’s not – she is real and sells lingerie to a loyal clientele.

So, when I was in there in August doing my back to school bra shop I noticed she had sets. I couldn’t believe it.  “Jo – you have sets” I squealed.

She told me they were hard to come by, but she had them made especially for her shop.  And she had one client who bought ten new sets each year.

But there was one that was so not me, but it was very Betty Draper. It was not Betty Francis and those of you up on your Mad Men will know the difference.

It was pink and had flowers, and lace and bows.  All things I don’t wear. But I put it on and  felt just fabulous. It was Mad Men worthy bedroom wear.

I bought it on the spot and wore it the night we watched the season finale.  I made a deal with Jo. I can’t buy ten a year. But I put in an order for one.

Now I have to go get dressed for the Emmys. I’m wearing my set – of course.