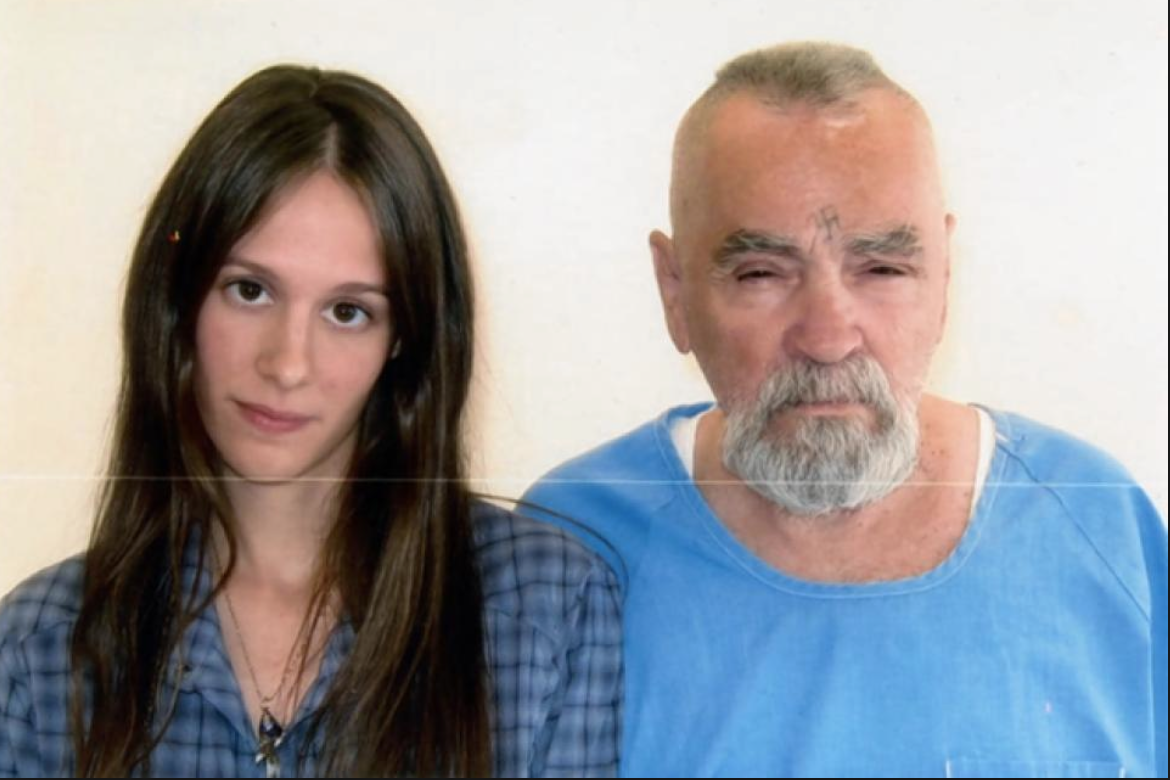 GET CHARLIE TO THE CHURCH ON TIME?

Who would have thunk it? Octogenarian, mass murderer and one of the 20th centuries more loathsome creatures is getting married.  To top it off he is marrying a girl young enough to be his granddaughter.  And of course because he’s a guy he can.

There is a history of women falling in love or at least attaching their marital stars to incarcerated, death row residents or lifers. It’s always a bit surprising and alarming. I think more so from the perspective of what on earth can she get out of it, other than fifteen minutes of creepy fame?

But there are inmates and there are killers and then there is swastika bindi wearing Charles Manson. The name does make your blood go a bit wobbly for a second every time you hear it.

Forget what her parents think. Forget what she thinks, as not doubt there is something deeply disturbed under her cool pre-bridal demeanor.

The thing with this one is not that it’s freaking people out so much because he ‘s doing it, it’s flipping out the unmarried millennial gals at an alarming rate.

The night the news was announced, the Twtterspere was packed with plaintive tweets from unmarried girls all over America, and the gist of it was all  the same~

“How come Charlie Manson can get married and I can’t?”

This was the ticking clock, E – Harmony isn’t working, I’m at the end of my rope set.

I suppose the answer is some people are just star fuckers even if they have no conjugal rights and the star is known for his cold-blooded killing sprees.

The other group that is up in arms is the gay and lesbian members of society. If Charles Manson can have marital rights why can’t we too? And that is an entirely fair question; And one that was trending this week. Someone needs to address it, though I doubt they will.

Our country is inconsistent and unreasonable and phobic about certain things. Not an excuse but an explanation.

What I really fear will come of this is many woman will rush into the wrong marriages because of the kind of fear this union instills in them.

I am a member of the generation that was accosted with the threat, “If you are not married by thirty, you have a better chance of being blown up by a terrorist.”

We didn’t have social media to post our feelings on. But I know many, many women, myself include, were so terrified by this we went charging into the wrong marriages out of nothing but misplaced fear .

The study turned out to be totally wrong. I know many people who were not married then, got married and I know of no one who was bombed by a terrorist.

So that little piece of irresponsible journalism caused a lot of unhappiness; as I fear Charlie’s wedding will too.

It is scary to look at yourself in the mirror and see someone desirable, giving and good and you remain alone, while Charlie Manson gets a cake with a bride and groom on top and party with eight of his nearest and dearest.

But I guess what I want to say to all you single millennials – please do not pay any attention to this. For the one girl or maybe two who might have married him, I promise your there are millions who would not.

Point in fact, if you had the choice to marry Charles Manson or stay single what would you do?  Exactly.

These things can gather too much steam. They become collective fears that a generation uses as marker and a standard. Take it from someone who responded to the terrorist threat and has the divorce papers to prove it, do not act from fear. Do not let this influence your future and cause you to rush into something because this makes it look futile out there.

He will live in jail. Thank God. He will likely die within the next ten years. Hopefully. And then she will be in her early thirties and who  will ever touch her?

I rest my case.