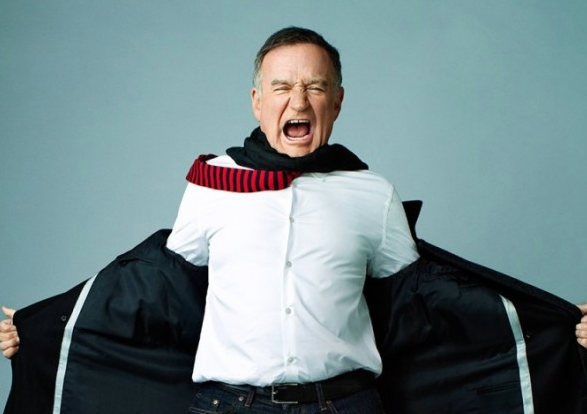 SOMETIMES  DEMONS HAVE THE LOUDEST VOICES

I didn’t know Robin Williams. I met him a few times. “How do you do?” No eye contact. He politely turned away. He was not a one on one person; that is well documented.

He was most comfortable in front of a crowd, where he could unleash his demons. There they became his friends and retreated from the enemy camp. He could fearlessly bring them out to play where he/they would delight the world.  And he was a fearless performer. Fearless.

But what happened when that manic energy was tuned down? What did his world sound like when the demons only had him to converse with?  What went down when there was no screeching audience to drown them out?

No one ever really knows what goes on inside another person’s mind and sometimes life. You can be married to someone for thirty years and think you know them, when in fact you don’t. They have other lives. Friends you never knew about. They carry on endless email conversations with people who they confide in more than they do you. They meet and share secrets with people you have never met.   And then sometimes they have demons who they spend more one on one time with than they do you. You just never know what is really going on in the lives of others, even those you are very close to.

Robin Williams could not suppress his mania, but he could hide his lows.

His mania was the engine on which his talent ran. Did he fear like many comics that if the mania were too quiet he might no longer be has funny, get the jobs, the awards, the endless applause?

It’s no secret he had substance abuse issues.

It’s not a revelation that most funny people have a deeply wounded soul rattling around inside of them. I have worked in comedy all my life, there is not one of us who does not carry some primal injury.

Does it mean the bigger the talent, the larger the wound? If that is true then it is no surprise that Robin Williams had bigger demons than almost anyone alive. I’m sure he suffered tsunamis of depression. As the work was so deep, so funny, so manic, the flip side had to be horrendous.

There are so many classifications for disorders now I am amazed the doctors can keep them straight. And my guess is many don’t.

Depression and substance abuse are first cousins. Most addicts  find the substances ease the pain, until the addiction causes more; a viscous cycle familiar to far too many.

While it takes courage to quit it also takes belief, and for some the demons override faith.

People on the outside tend to look at celebrities and say, “How could they? They had it all.”  But “all” is exterior; all is money and houses, and fancy cars, and flying private. It’s friends who might not be there if you didn’t’ have the blow, the dough and the show.

They go in thinking the applause will drown out the noise of the demons, and it does, until they are off stage.

Then the demons yell louder. They shriek and they can’t tell anyone about it as they will say, “but you, you have it all.”

You feel you are not entitled to your demons; they are stray houseguests that somehow wound up living in your body. But no matter what you do they will not vacate.

There are people starving, dying, walking around on one leg, Robin Williams best friend was the quadriplegic Christopher Reeve, who fought to live as long as he could.

I can’t imagine the thought of that did not haunt him. He fought through that and I can’t get through this. Whatever this was.

Some people don’t have demons. Others can quiet theirs with meds, with help, by reaching out.

Some demons are not silenced by meds. Some people feed their demons the wrong food, and then isolate themselves so they don’t let the world down when the demons are louder than success, than talent, louder than love.

When the world is looking at you to make them laugh, how on earth can you ever let them see you cry?

Sometimes for some people there is no voice louder than their demons. No amount of anything shuts them up.

And people seldom share their demons carrying’s on with others. They are ashamed. Ashamed, as they should be able to control them. Especially masters of the universe. So they resort to darkened rooms. They turn inward where the demons live and shout as opposed to reaching outwards where they might find some help and understanding.

For some there is no help, or they just fall too far in to believe that help will reach them

For some people the pain is far too great to keep on keeping on.

It turns out that Robin Williams had been diagnosed with early Parkinsons. Micheal J. Fox has lived with that for over twenty years. They say Robin Williams worried about money, but reports are he had plenty. He had had succuseful open heart surgery, which is known to trigger depression, I’m sure much worse in those who already suffer from it. But I know many who have gone through open-heart surgery and not one has killed themselves. When the depression lifted, they had a new lease on life.  They say he was upset that his last two projects had been failures, yet he had four big films coming out in the next six months.

Sometimes the demons have the loudest voices and if you don’t let anyone in to counter those voices, they will win.

And sadly in the case of Robin Williams they did.