And cod. There are entire stores devoted to cod.

One thinks of Spain and the first thing that comes into mind is Tapas. I know until I went there that was always the first thing that came to mind when thinking about Spanish cuisine.  And not having experienced a lot of tapas I thought – bar snacks. I certainly did not understand they could be as varied and complex as they are. Nor was a I aware it was an actual way of eating. Many little plates of prepared food. Pick what you want. Eat on the run, or sit for hours. I think it’s swell. I wish we had more Tapas places in New York as it is exactly the way I like to eat.

While there, we did a variety of tapas dining – from the upscale place at the W Hotel, which is run by one of those bold face named Spanish Chefs, Charles Abellan, to a place that must have been The In and Out Burger version of tapas.  My favorite was the old school traditional place we wandered into that had been serving up ham and fried artichokes since 1880.

The other  thing Barcelona is big on is markets. Our friend Adriana explained that each neighborhood was built around two things a market and a church. Sometimes in the case of the market in El Born they built the market right over the Convent.

Cod.  Ham. Shrimp. Squid. Octopus. Cheese. Olives. These are just some of the staples.

And Olive Oil. Little known fact,  Spain is the largest producer of olive oil in the world.  When we think of Olive Oil we think Italy and then Greece – right?  But the Spaniards produce almost two thirds of the total tonnage of olive oil in the EC. In fact the Italians import a lot of their olive oil from Spain and then stick it their bottles and smack their labels on it.

The other thing Spain has become known for in the last two decades is top notch chefs. For ten years the number one chef in the world – year after year was Ferran Adria, the owner and chef behind  elBulli  and the world’s the foam king. People would make pilgramges to his restaurant outside of Barcelona. In a final tour not seen since Ole Blue Eyes stopped singing,  he shuttered his place two years ago, people were beyond upset by this, they started making reservations years in advance so they could get there before it closed. For foodies this was a total bucket list spot.

He has left behind a slew of young men who worked for him – all of whom have opened up their own restaurants.  We did  not plan far in enough in advance to get into any of them.

We did find a small place that was not considered the top of the top, but we had one of the best meals we’ve eaten for a long time. It’s called Gresca.  I found it by accident through the  Luxe guide.

It is tiny, maybe twelve tables.  They take it very seriously but not the point it isn’t any fun.

Sitting here on the plane heading back to New York,  I can think of about ten foods I wish I had tried and  as many restaurants I wish we had gotten to. But there is next time. And we did have some memorable meals. 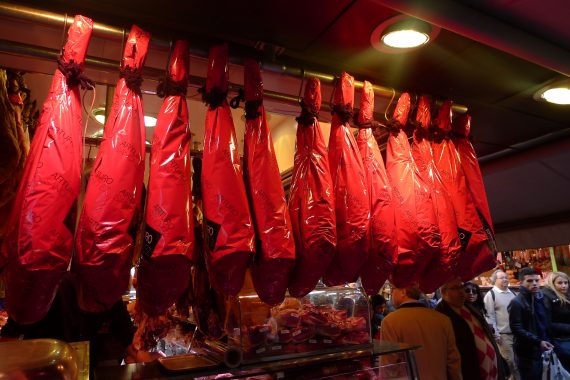