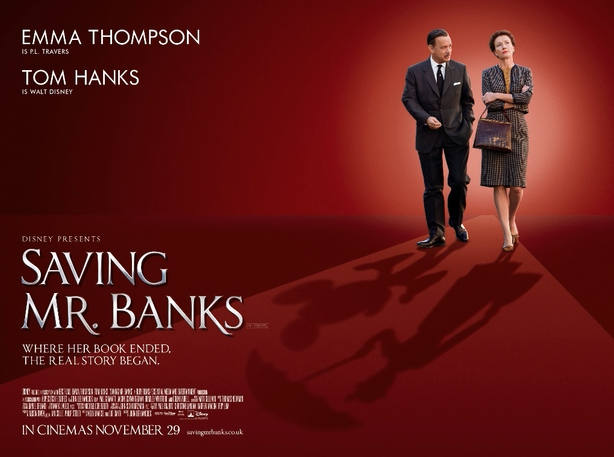 If you go by the rule that the title should tell you what you are going to see, this one is deceptive. Though the heart of the film, albeit a bit buried, is in the title.  I fear the average moviegoer might miss this and thus miss one of the best films of the year.

Saving Mr. Banks is many stories in one. The narrative that unfolds is that of the twenty plus year battle it took Walt Disney, charmingly played by Tom Hanks, to win over the crusty English writer, P.L. Travers, so she would ultimately sign over to him the rights to her book Mary Poppins.

One has to get past many things in order for this film to work. Luckily, most people don’t know Disney was not known for his charm, good humor and patience, but was a major league prick, who got things the old fashion way, any way he could.  Hanks, being Hanks, and the film being made by Disney, sets him up as more of Mickey Mouse’s brother: Soft and cuddly and out to make you smile.

While this false portrayal  works for this film – it is historically deeply inaccurate.

P.L. Travers was not actually English, despite the fact she gave the world the iconic English nanny Mary Poppins and that most English of families The Banks. Travers hailed from Australia, and Travers was not even her real name.

But some of the big heartbeats of the story lie in the unfolding of Travers’ past.  And if we can believe it, her chaotic, tragic history, is what led her to write Mary Poppins.  So for Travers,  Mary Poppins was more than a character.  Mary and the Banks, especially Mr. Banks, were the idealized family, she invented to replace her own. Once you get this, you understand why she was so reluctant to let anyone start manipulating and changing her creation.

The film’s core rests in the story of a young girl who worshiped and was ultimately betrayed by her deeply flawed father.  While the father adored her, he preferred booze. There are some sentimental, soft focus moments, though we don’t know if they are true or false.

If you are a person who wrestles with the demons of a father who abandoned you, bullied you or up and died on you, you will find yourself sobbing throughout this film.

It pulls on emotional heartstrings, while it entertains. It packs a wallop, while it takes great liberties with well-known figures.

But as we have learned repeatedly films do not need to be historically accurate to work. If you have a heart Saving Mr. Banks will win you over.

The big lesson we learn is that Mary Poppins, flying in over the rooftops of London, did not land at the Banks’ residence to save Jane and Michael, as we have all believed since childhood. But she arrived to attempt to save the parents; to save the parents from themselves, and allow them to be better parents, thus saving the children. This is something we can all understand as adults.

Sadly, in the case of P.L. Travers it did not work out that way.   Nor did it work out for Walt Disney. Their broken childhoods left them both damaged, but they were imaginative enough and energetic enough, that they went on to create worlds in which children are loved, coddled, tickled and danced with; where parents don’t drink and die, but come to their senses and give up work to fly kites; where troubles disappear with a spoonful of sugar and there are kingdoms that for the price admission will allow you access to the happiest place on earth.

P.L. Travers and Walt Disney might not have been the nicest of people, but in an attempt to heal themselves and emend their pasts, they gave great joy and fantasy to generations of both children and adults.

It’s hard to find fault with that.