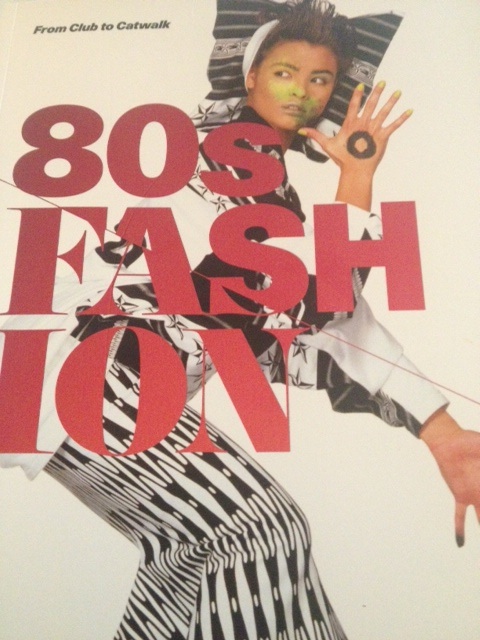 Rain be dammed I ran around yesterday packing in as much as I could.  When you travel and blog you get up really early. It’s none of that lolling around in a vacation bed. It’s early coffee, typing and uploading photos.

Best travel tip I can give –  if you want to see any museum shows that might be a hot ticket, buy your tickets online and have them printed up when you arrive. I told someone recently to do that before going to see The Anne Frank House in Amsterdam and they thanked me. It costs a tad more, but when you are limited on time it’s worth it. Had we not had advance tkts to the Klee show on Sunday we would have spent a half hour waiting just to buy them.

So yesterday I had tickets to see the 80’s Fashion – From Club to Catwalk show at the Victoria and Albert Museum.  Which happens to be one of my favorite museums anywhere.

The show traces the beginning of certain fashion movements, punk, goth, a type of fearless street style to the androgynous club scene in London in the 80’s. And many of these trends linger on to this day.  For real fashion followers it looks at the group of St. Martins students and their early work,many of whom went on to be major designers. Enough about that, those who don’t give a hoot about clothes were just bored silly by that explanation. But those who care would find the show interesting.   And anyone of a certain age seeing it, would be swept up by the 80’s music, the video shows and the trip down the memory lane of  that bizarre time in fashion.

Now, they said no photos of the Catwalk show, so everything here was snuck and not too clear.

My favorite wing there is the South Asian Art. I could and have spent full days there just wandering among the Buddha’s and Ganeshes. Yesterday I did not take the time. But did a breeze through as I couldn’t be there and not.

That was the morning, it was one  and I had to take off.  I met Glenn for a quick lunch on the fifth floor of Harvey Nichols. Then I went to have a coffee with Eric Fellner who along with Tim Bevin are the heads of  Working Title Films. Some of the best years of my career were spent with them. They have amazing new offices in Marylebone. A section of London I have never spent any time in.  Like so many parts of big cities it has been tranformed in the last ten years. When I left the Working Title building I just took my camera, wandered and shot. I fell in love with the whole area. And then I did what I do when I find a place I love, I start imaging what it would be like to live there. I ponder if that cute little cafe would be where I would pop in each day for a coffee. I picked out my butcher and florist. It’s one of my favorite  pastimes. I know it’s not living in the moment, but it’s a hell of a lot of fun.

By around four-thirty it started to rain so I took a cab to Motcomb Street as it is walking distance to my hotel and I wasn’t ready to call it a day.

People used to make jokes about the English food. It has gotten to be so good and there are endless food shops.  There are so many,  for a few minutes yesterday I could have sworn I was in Paris.

I apologize for any mistakes on this.  If I don’t press send now it doesn’t go out.