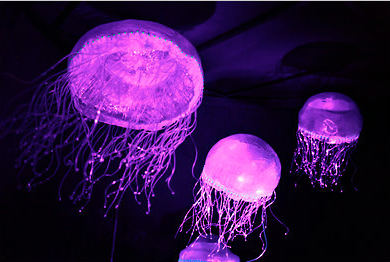 A very interesting article appeared in the science section of the New York Times this week.  It discussed the way jellyfish move through the water.

Stick with me on this. I am going somewhere, maybe not like a jellyfish, but you will see.

“In the first phase, the jelly contracts its open bell and pushes water behind it, propelling itself forward. Then, the bell returns to its original shape and fills with water again.

Earlier studies had shown that the jelly got a second thrust during the rest and refill phase, but they had not calculated the jelly’s energy expenditure during that time. It turned out that the jelly was not actually doing any work in that phase. Instead the elastic tissue in the bell acted like a rubber band, re-forming the bell. That action produced water movement under the jelly, called a vortex, that pushed it forward.

The study found that the secondary push was responsible for about 30 percent of the distance traveled by the jellyfish. And it worked even with anesthetized jellies that were pushed through the water. The recovery phase and its kick were purely mechanical. “That’s what makes them so energy-efficient,” Dr. Gemmell said.”

What is my point?  When not expending much energy the jellyfish is actually propelling itself forward.  It’s building up energy reserves in the down time between thrusts that actually allows them to move without depleting them in any way. They are moving between movements. There is a great lesson in that for all of us.

How many  worry and fret they are not moving forward?   I am a big proponent of taking leaps, diving in, and I prescribe to a momentum equals results philosophy.  But life has taught me that in between the thrusts is where I find some of my real inspiration. It is often that inspiration that leads me to the next project, which propels me further in my journey.

It’s in the quiet that I am able to see things clearly, when I am in the “actually not doing any work phase”,  much like the jellyfish, I am in fact doing  a lot of work. I am moving ahead.

As a writer it is frequently when I’m not writing, not thrusting and expending mental energy, that I am a subconsciously  working things through in my mind.

How many of us don’t take that time?  How many of us chastise ourselves for those moments when it appears we are not doing any work?   But then, much like the jellyfish, when you look back on those times, how fruitful were they?

Did you move forward when you thought you were standing still?  We don’t actually know what the jellyfish think. My guess is they are not a self-reflective group.

Slowing down and letting yourself rest between thrusts will refill your tank; it will likely make you more efficient and allow you to glide ahead without exerting and depleting yourself by worry and stress.

The space between the breaths they call it in meditation. It’s where the light comes and it’s the place where the mind quiets down and allows us to find bliss.

In the event none of this has moved you in the least, apparently t jellyfish have so much extra energy  they have more time and vitality for sex.  Thus the reason for the over population of jellyfish the world is experiencing.