I don't know what I like most about Amsterdam: the order, the canals, the art or the airport. I'm sure there is disorderliness lurking somewhere but we missed it. 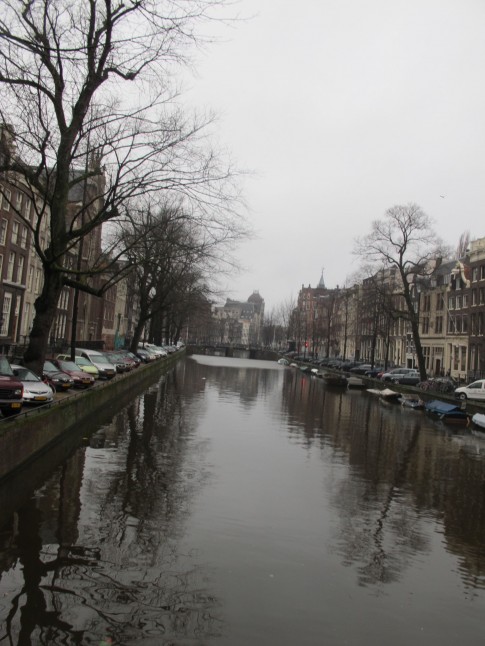 I don’t know what I like most about Amsterdam: the order, the canals, the art or the airport.  I’m sure there is disorderliness lurking somewhere but we missed it.

Everyone speaks English perfectly, some better than people you run into in the States.  People are nice and helpful. We were ripped off once by a cab driver who came from another part of the world entirely. There is nothing that isn’t pleasing about the city –with the exception of almost getting plowed down by cyclists all the time. But that was our fault and not theirs. We were never able to figure out the many rules of the roads. Between the bus lanes, the bike lanes, the car lanes and the cycle lanes it’s not easy to figure out which space is yours.

New Years Eve there is something else.  I have a feeling this year might have even been more over the top than normal since they changed the drug laws on the first and it is no longer legal for foreigners to get high.

They are also lax when it comes to fireworks, which translates into anyone can shoot off anything they want wherever they want.  Thus the fireworks started going off in the afternoon. We came out of the Rijksmuseum having seen their  rooms of greatest hits. Most of the museum has been closed for renovation for six years. This means they have taken the masterworks and put them into a small segment of the museum.  According to our friend Roland who lives there, the museum attendance has never been higher. I guess people avoid the guilt when they duck out not having done the whole place.

But after standing in front of Rembrandt’s Night Watch for a good spell, which in my opinion is a flocked to work that exceeds its reputation; we went out into the streets and the pow, pow, bang, bang, sound of wireworks seemed to be coming from all over.

Actually, I heard my first ones at breakfast. By nightfall, which happens at about four in the afternoon it’s insane. They are shot off of cars, out of doorways, from moving bikes, from windows, street corners, bridges, anywhere and everywhere you go something firey, bright and loud is heading your way.

It’s actually dangerous;  so much so they are thinking of abandoning that as well as the drugs.  Taylor and I almost got nailed by several firecrackers on our way to dinner. And  when we are standing in the window of our room watching the endless colors and fire in the sky, one a spark literally flew in our room.  It’s quite a sight and a sound and goes on well past midnight.

Maybe being orderly all the time has its drawbacks.  But it was a memorable New Years Eve and a grand way to bring in 2012.

Continuing what I think has become a family tradition of spending New Years Day in Jewish memorial museums, (last year we were at the one in Berlin) we went to the Anne Frank House.  To say it’s moving would be trite. They  have done an extraordinary job restoring it and for a little extra you get a fifteen minute lecture and once again, buying tickets early paid off big time. The line was around the block and we zipped in.  My tip for the New Year, if you go anywhere and want to visit a major museum buy your tickets online before you go. It costs a tiny bit more, but when time is precious and if like me you hate standing in lines it is worth every cent.

We spent our last night of the trip having dinner with our friends designer Hester Van Eeghan and her husband Roland.

That gets it’s own blog as dining with them in their canal house is too special to be crammed into my trip round up.

Now I want to bore you all for a moment with a little hosanna to the Amsterdam Airport. As anyone who reads this blog knows I can lose it at airports. I have no patience (something I’m working on in the new year) with  inefficiency, especially when it involves transport. I get there early. I’m convinced things will go wrong. I often battle with my unruly evil airport twin.

Well, I could move into the Amsterdam Airport.  I could be like Tom Hanks in The Terminal and spend the rest of my life there. It’s almost a utopian society. Everyone is nice. There are no lines. The customs people are charming, yes, they are.  Have you ever heard that word associated with Customs Workers?  They have the most efficient, thorough security I have encountered anywhere in the world.  There is a library, a gorgeous business center, a perfect looking health food restaurant. It could be a great life and you would never miss a flight.

But the biggest thing I have been obsessing about for days is the whole detax thing.  I never usually do detax as more often than not I’m flying out of Paris and the lines there take forever.

But this year, the dollar went further and we bought our

Christmas gifts for each other in Italy, so I got tax return slips, meaning when I left Italy I would get the 11% sales tax returned to me.

Everyone in Italy said you get it back when you leave Florence. I didn’t trust this and I wanted to know how long the lines would be. My ODD nature being what it is means I literally asked anyone I came in contact with what their experience with detax was.

Glenn even told me to stop it. The kids would walk away when I started the conversation.  I was so well informed in tax return and money changing I was able to calm down an hysterical Japanese man at the change bureau in Florence who was throwing his Euros and yelling he was being robbed.

I told him you could not change money anywhere in Europe, even a cash machine at a bank without them taking a cut.  I helped a South American guy by showing him how to fill out his forms, where to get them stamped and when to mail them. But none of this helped me with my OCD question how much time I should allow at the airport. Several people said be prepared to show everything, so I bought another suitcase and only packed it with what we bought in order to save time. The Change Bureau woman in Italy said do it Florence the airport is small it won’t take much time.

When we got to the airport in Florence and I had all my receipts out and the tax guy saw my ticket and said you can’t do it here you have to do it when you leave the EU. So much for staying up all night worrying about that.

We then went to check in, they weighed our bags, they had some silly rule I’ve only encountered on very small aircraft which is your carry-ons must be a certain weight. Ours were all way over it.  Thus it all had to be checked through. This meant endless paperwork and a hundred and sixty euro tab.

So Glenn gives her his credit card, we had thirty minutes to get through security at this point and make our flight. I was holding back hysteria. And the woman said

“You cant’ pay here, you have to go back to arrivals and check in and pay there.” I lost it, “Who makes up that insane rule”? We have to go back downstairs, to the ticket counter and pay for our luggage, which is upstairs at check in. Convinced we would miss the flight Taylor and I raced down to settle the bill, only to find ourselves being taken care of by the slowest man in the world. It was like being in India in 1979, fifty papers and all hand written. I huffed, I puffed and he glared at me and went even slower.  I finally said “Just take my money and let me go since you’re robbing us anyway can you at least do it quickly.”  His more ballsy superior told me to shut up. I told her they needed to learn how to run an airport, that nowhere in the world would this kind of craziness take place. Finally he finished, I handed him the credit card and he told me that it would take a very long time for a credit card. “Cash is better. Sure it’s better, it’s hard to skim from a credit card. So Taylor and I had come up with 160 Euros fast. We had the money but it like all we had and I was searching for coins in pockets, it was pathetic. By the time we got back upstairs, and they put our luggage through, the security line was a mile long. I went up to the guy in charge and said, “We will miss our flight we need to be at the front.” He scowled at me and told me to get in the back. I said in the US if you are about to miss a flight especially because of airport inefficiency,  (OK I didn’t say inefficiency but I was tempted) they moved you up.  “Not my problem, I don’t care.” And he shooed me off.

By then I was furious, nervous, tired as it was only six thirty am and we had been up since four and I had been awake since three thinking about detax. But he was not to be messed with so I shut up and we somehow made it. I was so mad when I got on the plane I told Glenn I would never go back to Italy, which is not true, but it was how I felt at that moment.

So imagine the instant love affair I was catapulted into when I got to Amsterdam International. It was like finding the perfect man after a series of total losers. There was no line at detax. Instead there was a lovely gentleman who asked me about my trip and agreed Italy had nice things. He had three well-marked mailboxes right by his stand for each envelope. He stamped quickly and kindly.

I wanted to hug him but the glass partition was between us.

And then when we checked in and the women behind the counter said, “Let’s make this easy for you so you won’t be charged for overweight.”  Hello, someone from Italian airports needs to make an emergency trip to the Amsterdam Airport and take notes for a month.

I admit it was a tiny glitch in a wonderful trip and I added it as I can’t just prattle on about what we saw.  As always our winter trips are the highlight of a busy year. We all take away wonderful memories and spend quality family time.

Glenn  – city Rome – sight – humidor in the Cafe Corso in the Piazza del Popolo. He really said that. I made him quit cigars yesterday.

The  best and worst airports in the world.