The abuse of horses in New York City is out of control. For some time now there have been activist groups trying to get the city to ban the antiquated horse and carriages that roam the busy streets and the park at all hours of the day and night despite all weather conditions. Sadly, they have had no luck. 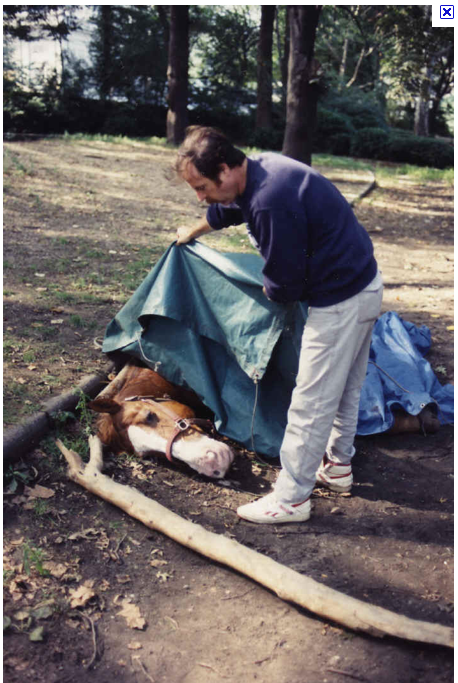 IT’S NOT RIGHT – NO MATTER HOW YOU LOOK AT

The abuse of horses in New York City is out of control. For some time now there have been activist groups trying to get the city to ban the antiquated horse and carriages that roam the busy streets and the park at all hours of the day and night despite all weather conditions.  Sadly, they have had no luck.

I have been upset about the horses for some time.  I live across the street and watch them out my window.  I see how they stand for hours in the freezing cold with very little, if any, food and usually no water. I see them standing in puddles of water with their cracked, uncared for hoofs.  I see their sad, tired faces and often their limps late at night as they finally head home. It breaks my heart.

You get all sorts of inane arguments from the guys who own and operate these horses. They say things like, we love animals, they are our livelihood, why would we mistreat them?

Well, crap is what I have to say to that one.  They make you money, plain and simple, and the less you spend on them, the more for you.

I have seen them hit the horses.  I have seen them keep them out there when it’s below zero and on snowy days when it is oh-so-cinematic for some tourist to whip around the park in one and pretend they are in a Woody Allen film.   I have seen the same horse outside for ten hours at a stretch. I’m not someone who just walks by, I see these animals being abused and neglected outside my windows day in day out: Year in, year out.

But as always, the real truth is in the facts. The horses have been dying . One died at the end of October, several passed out over the summer.  This last Saturday when I looked out the window and saw the line of tourists waiting to get hauled around in the carriages and the drivers knowing you have to make hay while the sun shines- so to speak, I said to Lucy “A horse will die today. They are going to be worked to death.” And sure as hell, that afternoon a horse fell over at the end of our block.

There are so many demons allowing all this to happen – so many elected officials who once again not only pass the proverbial buck,the buck is all they care about.

And we can start the buck where the buck is supposed to stop, with our leader and chief President Obama; in yet another unfortunate, misguided decision he decided  to  restore the American Horse Slaughter Industry. Good move Barack–slaughter our boys in war, slaughter our horses here at home. As long as you keep the banking industry happy you might get another term.

His reason for doing this is that horses were getting slaughtered anyway–it was merely happening in Mexico and Canada.

Now what does this have to do with the carriages? Well, what kind of horses go to slaughterhouses? The kind that are no longer good for anything except dog food, or perhaps a burger in France.

And what kind of horses are those? Oh, ones who are abused and/or worked to death. So there is a simple little connect the dots here. Once these horses are literally driven into the ground, their owners can make one last paycheck off them when they sell them to the slaughterhouses. And Obama has just made that easier.

And then of course, there is our wonderful, bought-his-way-into-a-third-term-Mayor, who stands behind the horse and carriage trade one hundred percent. Go Mike!

“Animals — like human beings — get old, but that was not a reason to stop hansom cab rides.”

Aside here ~ several of the dead horses have been young. They died from neglect, not old age.

Back to overstayed your welcome Mike~

“They’re animals and animals and human beings, eventually, we all unfortunately stop continuing and it’s unfortunate when it happens, but that doesn’t mean that you stop doing things. You just want to make sure that they’re well treated,” he said.

Bloomberg says that he cares for the wellbeing of the Central Park horses, but stressed how much tourists love them and that they were a New York City tradition.

A point Mike, but lynching was a tradition too and it sort of had to go. Clitoral mutilation is a tradition. There are many destructive, horrifying traditions. Just sayin’….

“There’s enormous demand and we want to keep things going in this city that tourists like and I think they add something to the charm of New York City and when I see them, they all look pretty healthy to me,” he said.

I have several things to say about that, Mike ~ Do they look pretty and healthy like your daughter’s million dollar horses?  Bet those horse aren’t ridden to death and left out in the cold and not fed well and forced to sleep in cement cells and never see the grass.

In fact Bloomberg’s own daughter is against the carriages.

And in response to the tourists loving them, let’s say we got a big Klu Klux Klan convention here in town–how would we make them happy?

I may be going way out on the ledge here; but it’s a crucial issue and it needs to be not only addressed but stopped ASAP. And Speaking of the ASPCA, what is their take on all this?

They pretty much have their hands tied, on one hand they do not think horses are made to be in the streets of a city like New York, yet on the other hand they are the ones who are designated to make sure they are alright, but on the other hand–we will call that one a hoof–there are no real rules in effect for them to follow.

According to Stacy Wolf, vice president and chief legal counsel of the ASPCA’s Humane Law Enforcement department, New York City law requires little in the way of veterinary oversight. While horses must be examined twice annually, there is no directive concerning the thoroughness of these exams and indeed veterinary records reflect that they are cursory at best. Additionally, there is no requirement that horses be examined by a veterinarian after they return from furlough.

The ASPCA believes that carriage horses were never meant to live and work in today’s urban setting. Neither the New York City environment nor the current law can provide horses with the fundamental necessities to ensure their safety and wellbeing.

What can you do?

If you live in NYC they will tell you what to do. If you come to NYC you can refuse to ride in the carriages. Some people have boycotted NYC all together as a destination until the horses are taken off the street. I for one am going to protest, march, hand out pamphlets do what it takes. Tweet this, Share it on Facebook. Please put this up on your Facebook pages. Stumble it Tumblr it just get the word out there and hopefully we can all then get the horses out of here and where they belong.  There are places in the country who are willing to take them and care for them properly. We can put the electric cars on the street for sight seeing and the world will be  a better place ~ at least in regards to this very important issue.

And I know people are starving and without jobs and the rest of it, but animals are totally helpless and we can’t ignore them because the rest of the world is a mess.

I will send a free signed copy of my book to anyone who Tweets this, Facebooks it and Google pluses it. PROMISE.

LINK TO ARTICLE THAT LISTS THEIR FINDINGS

NY TIMES article about Bloomberg’s refusal to ban the horse and carriages.