The day was carefully planned, unlike the week which has kind of been all over the place. Today Lucy and I had tickets to go see my friend Clay Rivers who is performing in The Christmas Show At Radio City. Clay who is now in his tenth year with the show got us house seats. He also planned a backstage tour, line avoidance, the whole nine yards. We were to meet him at 4:15 at the Stage Door on 51st Street to pick up our tickets.

The day was carefully planned, unlike the week which has kind of been all over the place. Today Lucy and I had tickets to go see my friend Clay Rivers who is performing in The Christmas Show At Radio City Music Hall.  Clay who is now in his tenth year with the show got us house seats. He also planned a  backstage tour, line avoidance,  the whole nine yards.  We were to meet him at 4:15 at the Stage Door on 51st Street to pick up our tickets.

This required a little fancy footwork on my part as Lucy has all day acting and is rehearsing  for her own show in January. I had to get her out an hour and a half early to make the 4:15 rendevous with Clay.

I did my usual what Tom Wolfe calls the Saturday Route down Madison Avenue and was a few minutes early to Radio City. The traffic this time of year is fierce and everyone and their cousins and their brothers and people they never knew they even knew are in town looking at the tree and the shops and going to see the show at Radio City.

I got there in time to make a detour to Rockefeller Center and see the tree.

This year Swarovski Crystals added a star to the plaza that oh-so-conveintly had a gift shop attached! I didn’t go in but it was getting a lot of traffic. People were sort of wowed by the star. I was like whatever, but took a photo for the blog as I thought well, maybe I’m jaded and missing something here, maybe this is an awesome star.

Aware of the clock I left there in plenty of time. There was a line all the way down 51st Street. I asked someone if it was ticket holders or pick up line. “Ticket holders” fifty people yelled and held up their printed tickets. I remembered then why I had not been to the show in seven years.

But  this year it’s apparently amazing and I really wanted to see  Clay perform, plus he said I would pick up my tickets at the Stage Door. So I excused my way through the crowd,  feeling that superior jolt you get when you legitimately go to the front of the line.  I didn’t know what to do, so I called Clay. He seemed happy to hear my voice, “What’s up? he said.  Now Clay is in the gold cast which means on weekends and special times he does all the shows. The guy works his ass off. I said “I’m at the stage door.” There was a pause, he is very polite,  “That’s great” and then there was a pause. “Do I get my tickets here?” I said. “Yes” he replied; “But Tracey your tickets are for tomorrow.”  Oy. I totally messed it up. He said we could go to the box office and see if we could get tickets for today – he would be right down.

Now Clay is what is referred to as a little person, he plays one of Santa’s elves. He is adorable and funny and too sweet. He came down and gave me a big hug and he said we have to move I should to be in the dressing room. And he took off like a rocket and I was trying to keep up and we were darting through the crowd and I’m yelling “Clay for a little guy you move like a gazelle.”  When I finally caught up with him we decided it would be best to wait until tomorrow when we had the best seats in the place and we could go on the tour.

I think he was relieved, he waved good-bye and zoomed back to get in costume. Now all I had to deal with was Lucy who was meeting me there and had been taken out of her class. I knew she would not be happy that I had goofed it up so badly.

But I had a plan, every year in Bryant Park they have a holiday fair that goes on for a month. Each day on the way home from school we pass it and we always say we have to go and we never have. I said I know you’re upset, and I am sorry, but we can go do the Bryant Park Holiday Fair. That totally worked I grabbed her hand and we took off through the most intense crowds I have ever seen outside of Calcutta. And I mean that. 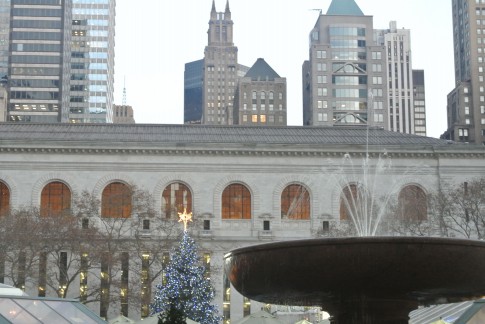 We are now Troll Bead fans. Lucy  started the beginning of a special bracelet purchased with some of the money her grandmother Lynne gave her last week for Thanksgiving.

OK, so we were kind of shopped out and cute thinged out and were totally walked out, but the problem was it was five-thirty, mid-town Manhattan on one of the busiest streets on one of the busiest weekends of the year. There was not a cab to be found. Since they started taking weekend trains off I never know what subways are running. The one thing I knew was I didn’t want to walk eighteen blocks home.
At that moment up pulled one of the pedi-cab rickshaw things that have taken over the city. Now I don’t take these. I think they are dangerous. They are expensive.  They are for tourists.   But I looked down the avenue and it seemed to be the only hope. So against all my better judgement and with Lucy egging me on, we climbed in the pedi- cab belonging to Escandar (might have spelled that wrong) from  Tajikistan. I know I spelled that correctly as I looked it up.

He proceeds to cover us with a plastic hood, zip us in,  then take off like he was competing for the Nascar championships, right into all the Sixth Avenue traffic.

The moral of the story, check your show days and remember Tajikistanis have  a need for speed and no fear of oncoming traffic.