This weekend the world lost a very special person and I lost a great friend. The artist Jack Baker passed away on Friday. In the story of my life he stands out and will always stand out as a central figure. 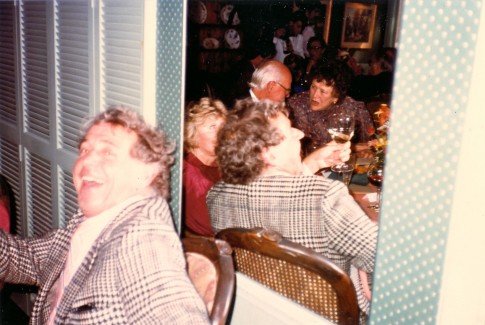 THE WONDERFUL WORLD OF JACK BAKER

This weekend the world lost a very special person and I lost a great friend.
The artist Jack Baker passed away on Friday.  In the story of my life he stands out and will always stand out as a central figure.

Jack was pure magic.  As a child I remember him always surrounded in a whirling dervish of color. The first time I met him, my mother stopped by his house on the day he was giving a big Indian themed party and in his backyard was a giant, pink illuminated mock up of the Taj Mahal.  I think it was Jack who planted the seed that I had to see India.

He was the first person I knew who ventured into the third world and found color and inspiration as opposed to poverty and darkness. Long before it became chic he took off for India, Ethiopia, Africa and Morocco. He came back with indigenous art and years full of inspiration to fill his own canvases.

Jack would enter a room and instantly take it all in, arms crossed, head titled to the side, with the Jack grin, one part Cheshire cat, one part pure delight, and one part benign smirk.  Nothing went past him. He knew the fools and one-dimensional people for who they were, but understood the part they played in his life and the part he played in theirs.

In a world of phonies Jack had the courage to be himself no matter what the cost – I learned that from him.

He was like a surrogate father to me. So much so that he became  an arrow my father used to throw when he attacked my life, “Why is Jack Baker more important than your own father? he would say.  “Why do you spend holiday’s with Jack Baker?”

Well, there were two reasons Jack and his companion of many years Fred Gowland were like our family and Jack never let me down. Jack never turned me away. Jack was there for me throughout my entire life whenever I needed hm. I got married in his garden when my own father wasn’t even at my wedding. I knew from an early age I could count on Jack in a way I never would be able to with my own father.  I knew he was there to stay.

For decades Jack was the person I would go to first when I couldn’t handle the labyrinth of my blood relations and he would talk to me by the hour. He understood things about my life long before I did.

Like with all of us there were many Jacks. When I first met him over forty years ago he was an art teacher at Santa Barbara High with a wife and family. Apparently he was an amazing teacher inspiring his students to be as outlandishly creative as he was.

He quit teaching and grew to become a very successful artist, but it never went to his head.

He lived in a magical house by the sea, with one of the most fantastic  gardens you can imagine.  The house was filled with his own art and giant Balinese elephants mixed in with pieces of driftwood wood and thousands upon thousands of shells. He combed the beach daily and was like a little kid returning with pockets full of rocks, dragging gnarled pieces of driftwood that he would then set out on his giant table and voila they were art. He found beauty in the mundane and also saw that what some pursue as beauty was in fact mundane.

He had a bit of a party boy reputation and he loved a good time. But he also loved being alone, walking on his beach, reading and creating his art. In his later life he spent part of the year in a small town in Maine. The lure of the sea and nature always stronger than the lure of big cities and the social life he could have lived 24/7  if he so desired.

I will always remember him, hair  askew, hands flying, a button usually missed, more often than not holding a drink, for much of his life sucking a cigarette, a runaway ash making its way to his lapel, scampering off to show me some new flower about to sprout, or climbing the hills of San Francisco looking for a great door, a new bar, a wonderful spot where the city looked different than from anywhere else.

Then there was Jack on the Rincon (the coveted spot of California coast where he lived) surrounded by his art and books, the Jack who read everything. The Jack you could sit and  talk to about serious things, yet every now and then he’d interrupt it with a “Did you hear about Mrs. So and So?”  Then one would leave the world of books and thoughts and head full on to the world of gossip. A place he could also inhabit with great dexterity and glee.

There was the Jack entering a party, knowing people would flock to him because he was one of the chosen who had a special incandescent light that followed him wherever he went. He would entertain and do his bit, he knew how to play the clown, but then would make an early escape as he knew for the most part it was all bullshit and would prefer to get back to his house and read.

But there was always the Jack who spent his days that accumulated into his life painting nature, objects, life, flowers, always with a vibrant palette of colors that spelled out happiness.   I think like many artists he was covering whatever dark places he hid inside by creating an exterior of splendor to make others and himself happy; much like the comedian covering their pain with a joke,

Jack was a father to three, two girls Liza and India, and a son Daniel who died tragically in a car crash decades ago. Like most parents that lose a child he carried that pain with him forever.

He had a soul mate, a companion of many years, Fred Gowland. For the longest time their names were one word JackandFred .  They sort of morphed into one person and I think in looking back on his life from my vantage point those were his happiest years.

But they stayed best friends even after they decided to live apart. Yet for many of us including them I think it was always JackandFred, Though Fred also went on and became a painter in his own right, he was with Jack right to the end.

There will never be another Jack Baker. Blessedly he lived a long life. He was close to eighty-eight when he passed away.  He lived life hard. He worked hard.  He left a body of work, children and grandchildren.  He saw the world and accumulated knowledge.  He left a totally unique imprint in the space he occupied. He had a great love.  He suffered and he had a grand time. He did exactly what you are supposed to do with your time here ~ he did it all.