This is the most asked question, as it is the sister question to how do I get readers, a following and feedback? In that way it is very similar to the everybody wants to write a screenplay syndrome. Many people think they will write a blog, it will turn into a book, the book will turn into a movie and Brad Pitt will portray them. Can happen…but first it has to get spread around the web. 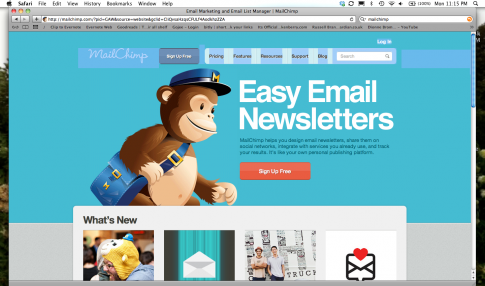 HURLING YOUR WORDS INTO THE WORLD

Once you have decided that you are going to blog how do you get the damn thing out there?

This is the most asked question, as it is the sister question to how do I get readers, a following and feedback?  In that way it is very similar to the everybody wants to write a screenplay syndrome. Many people think they will write a blog, it will turn into a book, the book will turn into a movie and Brad Pitt will portray them.

Can happen…but first it has to get spread around the web.

Not having a real plan for blog dispersal is like organizing a party, making the food, getting dressed up and not inviting any guests.

So how do you get your blog in people’s inboxes and RSS feeds so they will become hooked on you and keep showing up at your party?

When I started I had no idea what I was doing.  I started as a Mommy Blogger. My blog was called Freshman Mom it was about the first months after my oldest child left for college. I had a built in audience the other women I knew who were going through the same thing. It was not a huge group but it was mine. So I would write the blogs and send them out via my Gmail. In the beginning I started with maybe forty women, it moved up, within four months my list was around 200. Not every one was reading it and every day I got a little more courageous and sent out a few more.  Some people asked for me to stop sending it and I did.

After several months I didn’t have enough to write about daily, it was getting redundant. She left.  I’m sad.  She called.  She didn’t call.  We are all adjusting. I could only take it so far, on top of which she was getting sick of being the topic of discussion so she called less, which made me sound whiney, which at a certain point left me with a pretty mediocre blog.  But somewhere in there I liked blogging, so I decided to start blogging about my life.

Cheeky yes, but I’m not a foodie anymore, I’m not that political that I can talk about that each day. I don’t’ want to write only on aging, the topic of my book. I really just want to ramble. And I found people responded when I did.

After several months of that I decided I didn’t have a big enough readership, I was losing patience and didn’t want to wait, so one day I just sent it out to everybody in my mailbox. This is not the best thing to do however it’s also not the worst.

You have to be prepared for people writing back and saying, “Don’t send me this shit ever again.” You have to expect people to say “You must have meant this for someone else.” You have to be prepared for people emailing, “Why on earth would you think I would care about your life or thoughts?” If you can stomach that, I say go for it.  It’s not like you’re a Jehovah’s Witness knocking on the door and trying to convert them.  You are merely sharing your work and attempting to expand your base. I don’t put it under the heading of boundary crossing. If you are asked to cease and desist and you don’t – then it is.

It’s bold. It’s brave, It gets your blogs into people’s inboxes.

And the amazing thing is this, you never know who will respond. Many of the people I thought would be thrilled sent me the “Remove from this list at once” and people I assumed would find me boring and trite are reading me to this day. It’s a you never know until you try thing.

I got into trouble when my husband decided it wasn’t going wide enough and he sent it to his entire list, many of which are academics, presidents of Universities, Noble and Pulitzer Prize winning authors. I was horrified, it resulted in my writing a blog called I Cannot Send Nude Pictures to the President of Harvard.

But the odd thing was many people did not ask to be removed.

He did send out a note saying, “This is my wife’s blog, I think you will like it.”  It was loyal and amazing and scary.  Why would they like it? They weren’t sleeping with me.

I didn’t go to college, up until several years ago I wrote dopey movies for a living, I was not prepared for this kind of exposure but oddly it worked. My list was suddenly too big for Gmail.

As Seth Godin says there is a lot of noise on the web, you need to make yourself heard. This is one way of shouting “I’m here.”

Things to know ~ personal emails have limits due to spam and the fear you might be selling black market Viagra. So if your list exceeds five hundred names you can’t do it from one account.

Once you develop any kind of following I suggest going with a proper server. They cost as little as $15.00 per month. They are great for many reasons, one is they send it out every day at the same time. This gives your readers the sense of habit and it works as a deadline for the blogger.  It’s one of those if you are not at the station; you ain’t getting on the train situations.

The servers give you algorithms and reports. They keep your list straight. They offer easy outs for unsubscribers.

However, if you go the brazen route that I did it can get you in trouble with the servers. Servers like personal accounts do not want to be used for spammers so they have very strict unsubscribe rules. The server I use MailChimp wants you to have a 1.5% unsubscribe rate. That is hard for beginning bloggers to sustain unless everyone has signed on. Some servers make you send out a letter that people sign up themselves for the blog.

You can also send the blog out with the server and a note attached saying if you don’t want this send me a personal email and I will take you off the list. I tried that; it worked with some and not with others.

For well over a year I lived with the fear that the Chimp would throw me off.

I used to get menacing emails from the server with the photo of an angry Chimp saying your unsubscribe rate is too high, soon we will have to investigate.  Every unsubscribe sent me into a panic and resulted in my being angry at whoever did it; well actually only if they were friends. But I kept a list the SOBs

Signed off the Blog.  I stopped talking to some. I said I was bold not mature.

At one point I kept another server on the ready, FeedBlitz another popular email server. For six months I had FeedBlitz send my blog to me, and four people in our office each day. In the event the Chimp got pissed and tossed me, I would have another server set to go.

It all worked out.  I stuck with it and I eventually got more subscribers  than unsubs, but it took a good two years. I finally let FeedBlitz go and the Chimp and I are now on grand terms.

I like the servers better than relying on RSS feeds.
Many people like them and read their content through them. I personally forget to look at mine and think many others do too. If you can get your blogs into inboxes it is a much better way to to go.

If you can cook up enticing titles, anything the alludes to sex will always get people to open and click,  another hurdle I will discuss later in the week.

But if you can get yourself to that point, you are a quarter of the way there.