I spent several hours today in Zuccotti Park talking with and observing the Occupy Wall Streeters. It was an amazing experience. Everyone in NY should take a few hours and go do it. If you are not in NY, I share my time there with you. 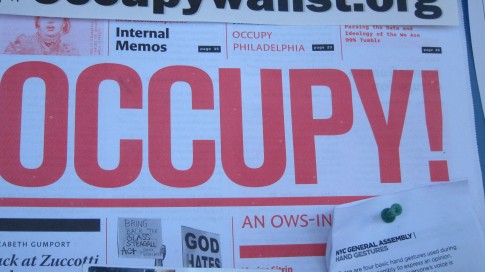 A VISIT TO ZUCCOTTI PARK

I had to make a choice today I could either take part in an active protest and march from Bryant Park up Sixth Ave. and stop at all the banks or go to Zuccotti Park.

“Thousands of #OccupyWallStreet protesters to barrage bank CEO’s with 6,000 angry letters from the 99%

Glenn thought I might get thrown in jail, but that is not why I didn’t go. I have actually marched in my life.  Well, sort of ~ more like paced in a line back and forth in front of big corporations like  News Corp, GE and Disney, as part of the Writer’s Guild Strike. I carried a sign with the threatening slogan WRITERS GUILD ON STRIKE.

It’s sometimes even marching with a bunch of people who are recognized when they walk down the street. But it is marching and striking and you know what it got us? Bupkus. It taught the big companies a lesson alright, that they could live without us.

One goes into these things thinking we’ll show them. And they usually show us.  They found The Kardashians and the Housewives and bakers in New Jersey who could bring in ratings by making giant cakes that look like the Leaning Tower of Pisa. It taught them that crazy women with giant lips and even bigger diamond hoop earrings  could make them as much money as a well written show. They learned they could pay less and still get viewers.  And when we finally stopped marching and people had been out of work for months, they made everyone take a giant pay cut; those they let work again.  Many writers never recovered their careers.

So, Showing Them I know from first hand experience does not always do the job you think it will. But for the time you are fueled with the fumes of change you feel empowered.

I’m not exactly comparing that to what is going on now but as I often hold two thoughts or emotions at once, part of me wants to see people march.  I know they need to express their profound unhappiness, fear and disgust at the system that has let them down. And another part of me says how will this actually change anything? The cynic, the person who has been around long enough and marched for more and ended up with less knows it is a very hard thing to accomplish.

We are not Egypt or Syria; this is not a government that can be overthrown any more than they can take away the Federal Reserve or a bunch of middle-age writers who were fast on their feet could convince giant parent companies they were a crucial part of their success.

It’s very simple: jobs need to be created and people of all ages, talents and educations must feel like they have a future.

And for that I can turn up. For that I can say things need to change. Will they change? I’m not so sure. As always, Jon Stewart sums it all up perfectly, the ambiguity, the silliness and the severity.

That being said instead of marching and handing out flyers I decided to go to the mother ship of this movement, Zuccotti Park. I wanted to talk to the people, to find out what they were thinking and feeling.

Now for those of you, who don’t know Zuccotti Park, it is named after a real estate tycoon John Zuccotti.  He owns the land but can’t build on it. It is a private park, which is why they aren’t getting tossed out.

What I find ironic is John Zuccotti went to Princeton and Yale. He has held many government and civil positions. He was chairman of the Real Estate Board Of New York.  I don’t know the guy but my guess is if he could build on the land it would be a big giant building full of the very companies that Occupy Wall Street wants to bring down. He is a platinum -card- carrying member of the one percent club. But his name will now always be associated with makeshift housing, politial unrest and unemployment. What the name Woodstock is to the sixties I think Zuccotti will be for this generation. I don’t think that was part of his business plan when he left Yale.

So armed with two cameras, plus my iPhone camera and what I fear is a dead Flipcam, my assistant Catrin Lloyd Bollard and I went down to Mr. Zuccotti’s park.

Catrin is an important part of this as she has been down there many times and Catrin is a real example of what is wrong with the big picture and why young people feel as angry and hopeless as we are learning day by day they do. Catrin has a degree from Harvard, she is smart as whip, pretty as can be, and cannot at this moment (it will change) get a better job than working for me.

There was a time when you came out of Harvard and you pretty much got the job you wanted. She told me on the way down that much of her class, the ones who came out with Liberal Arts Degrees are not getting the jobs they desire. The positions are not there, Harvard degree or not. The job market is shutting them out.

That is not what they were promised, it’s not what they worked so hard for and whether you come out of Yale or City College you want to know there is a job and house in your future.

In interview after interview today, all of which I fear are gone with the deceased Flip, people kept saying the same thing, “I just want a job and a house.” Throw in a dog and a BBQ and that was the American Dream.

The park is packed with tents, and people; it’s teeming with energy, frustration, elation, anger, exuberance, hope and despair.  One minute it smells like a sewer and the next the scent of sweet cloves fills the air, and of course there is the smell of weed from time to time.  There are people of all ages, races and walks of life. They are unified and fortified with the dream that by just doing something even if it’s sitting in a tent in a park owned by a rich man they will somehow have some say in what their future might hold.

They are living, walking, eating and breathing the values the basic premise this country was founded on.  The fact that this makes them freaks in the eyes of many is a giant part of the problem. 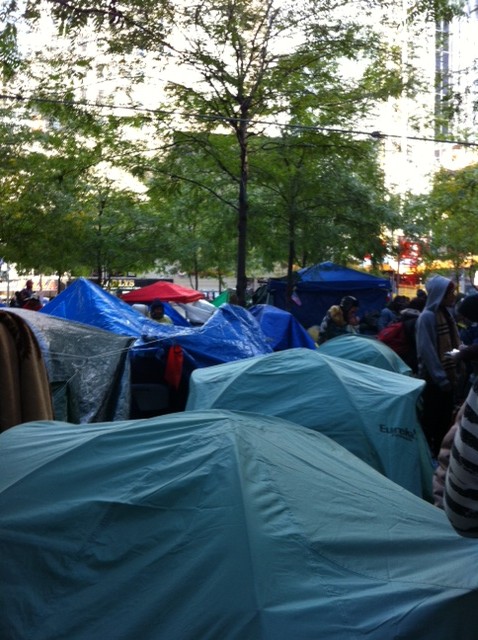 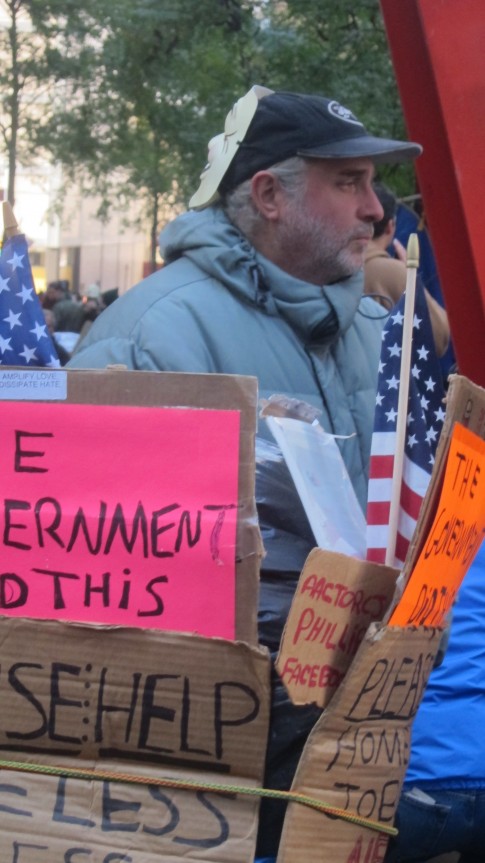