I don't know a lot about many things, but there are certain things I thought I had down, shopping was one of them. The recent marriage of Target and Missoni brought me to my knees. 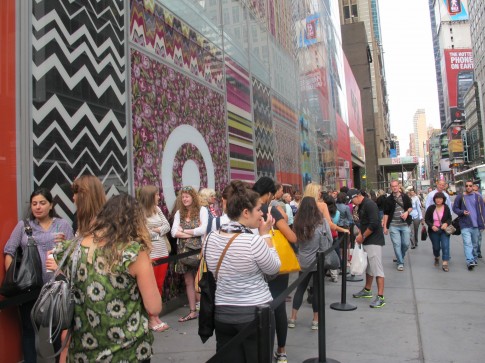 For those of you who don’t have access to any media and might have missed it the ultra expensive Italian fashion house of Missoni climbed into bed (using a line of their own sheets) with America’s favorite low priced emporium Target. Together they released a special collection that was to be sold through Target for one month.

Now I must admit I did mark this event in my calendar. I saw a few of the items in fashion blogs and a photo of the special edition Missoni bicycle. Never mind that I don’t ride a bike. I know how. But I haven’t done it for decades. I thought to myself, if I owned a bike like that I might actually ride or just keep it in the back yard as a conversation piece

Then the other morning I was reading Habitually Chic, and Heather Clawson mentioned she had been to a special event at the Missoni pop up store that was only open for three days of fashion week. She said that things had really sold out but they were opening at nine the next morning.
When I read this I assumed they has sold out and were restocking so if one got there early – EUREKA!
I was dressed and at the corner of 42nd and 6th by 8:25. They had painted the side of the building in Missoni stripes and squiggles. You couldn’t miss it.
The line was not so bad, in fact it was shorter than I thought it would be.
I don’t go to many of these things, any for that matter and I hate to stand in line. But eavesdropping on the real potpourri of characters around me led me to believe I was in the land of pros. They were talking about getting up at four and waiting for the Lanvin at H and M. And how one of their friends had bought $13,000 worth of things at the Mathew Williamson for H and M sale. $13,000 at H and M ???? They were talking pacing and pricing and packing of goods. I was taking photos for the blog.
At nine the doors opened and people ran as fast as they could considering we were packed in like sardines. Which meant until they could move forward they moved in place, think those joggers who don’t stop running while they are waiting for the light to change.
I didn’t know what I was doing and ambled in the store like I had all the time in the world. Someone behind be shoved me a bit and grabbed three bags to put their goods in. Three bags?  I calmly took one and then did what I tend to do when I walk in a store I took it all in. I looked around me; I tried to spot where the clothes were in relation to the house wares. And while I was having a meditative shopping moment, the hordes around me were grabbing everything in sight. And I mean everything and they were taking two five, ten of the same item and they weren’t looking at sizes or colors. They were grabbing and cramming and pushing and shoving and it took me about five minutes of pondering a $25.00 skirt for Lucy before I realized what was going on. And then in if you can’t beat em, grab with em moment I started grabbing too. Three identical black and white blouses. The last rose design blouse that was hanging; it was a small. Fine, Lucy is small. Pajamas. I don’t wear them but I shove three in my bag.
I made the mistake of contemplating a sweater while the last of the skirts walked by me in the arms of someone carrying six.
What I really wanted was one of the vases; but the only thing on the vase shelf was an empty Starbucks cup.
At that point my competitiveness, my love of shopping and some weird adrenaline kicked in and I started running around like a crazy person. But by then very little was left. The sweaters I had been pondering were all gone, only a small was left, it looked too big for Lucy and too small for Taylor or me. I grabbed it anyway. I furiously tried to find a medium of the weird green corduroy coat I walked by three times. Someone dumped a bathmat. OK I think they dumped it. They might have dropped it; I didn’t stop to ask. I picked it up. It was each man for himself. As far as I was concerned at that point sua bathmat et mia bathmat.
There were two girls with I swear five full bags each. They stood in the middle of the room going over their loot piece by piece. They had multiples of everything, Why??? They didn’t need seven of the same skirt. A big crowd formed  around them we were all hoping they might be making critical decisions and start-leaving things behind. Everyone was ready to pounce. They did not part with a thing, instead they snarled, “Why is everyone crowding us – get away. “ Fine, take every ballet flat, in every size and be snarky too. Ever heard the word KARMA?
I really contemplated the bike, I could have bought it, but I realized there was no point.
The pop up shop closed a day and a half early because they ran out of everything.

I left with two bags. I thought I did OK, but not great.
When I got to the office I showed Glenn my spoils. He was only impressed with the bath mat the woman dropped. The blue sweater did not fit me, but it found its way to Leigh Patterson who works in our office and  it looks great on her.

So today at ten I logged online to see what Target.com was selling. It would not allow me on. I tried several times. Too much traffic.
I mentioned it on Facebook suddenly people from Chicago posted the same thing was happening there. My friend Jesse Apuuzzo Butterbaugh  from Pittsburgh said she had gone and by 8: 45 -nothing was left. Tori Vought wisely went online at seven am and got some things.
But all over the country the stores were selling out in minutes.
What is this? How much do people need?
At noon I got a call from Taylor, she was actually on the Target site. I was so impressed I posted it on Facebook. She asked if she could buy a few things. I said “sure” but I wanted her to read me what was left. As quickly as she was putting things in her basket, not big things, tights, a makeup bag, I told her to grab one for me, a pair of ballet flats, wow, those girls actually left some in the country. I kept telling her I couldn’t believe she was actually online, all morning that stupid Target dog kept saying “ Sorry too much traffic, try later.” I told Tay to try and check out, she was looking at a coat. I said “I think you should check out I fear people might be taking things from your cart, while you are shopping. “ Suddenly she could not access the site. Then boom – it was like hurricane Irene had swept through they shut her off. The stupid dog showed up and gave his Due to too much traffic spiel. She started to whimper; she said she was sitting on her router. I said it didn’t matter Jesse was turned away in Pittsburg before they opened.

I told her I had bought her a few things when I was in the shop. I told her there was Target black out all over the country; she was not being singled out. They had not planned on this or had they?

A half hour later someone said, “Check out eBay” and wouldn’t you know it within hours, pages and pages of this stuff was for sale for up to ten times the price. These people were pros, they weren’t just nice people like Jesse, and Tori and Taylor, looking for a deal on a Missoni pillow or a makeup bag, they were real hustlers.
As of this evening there are over 200 pages of Missoni for Target on eBay.
I seldom have buyer’s remorse, but I should have bought that damn bike, they were $499 and are now selling for $1500.