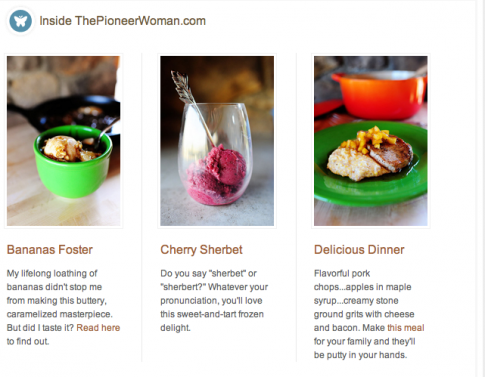 Saturday I spent six hours watching various shows on The Food Network and I came away with one thing, they should have a giant warning much like they do on cigarettes “Cooking from this show will be hazardous to your health.”

Now you might want to know why I wasted six hours of my day watching the Food Network. There was a period when I was fascinated with Ms. Ree Drummond aka The Pioneer Woman. I got over it for a variety of reasons; the main one being she never came clean about how she is a totally invented character and her AW SHUCKS cowboy husband owns like a quarter of Oklahoma.

So Saturday morning when I got back from the gym I turned on the Food Network. PW was not on the air but a sweet, chubby couple called The Nellys were. I immediately Googled them to find out how they ended up with their own show.  Turns out they have a very, if not the most successful BBQ restaurant in Memphis.

So there were the Nellys in their homey kitchen whipping up a batch of pineapple salsa. Then Mr. Nelly (an unfortunate name) said they had to make chips.  He said in fact “You have to make your own chips.”  Then he proceeded to take out a giant fryer, at which point Mrs. Nelly poured in enough peanut oil to fill a swimming pool and they took to frying up a batch of white flour tortillas.

This is where I started to get worked up. Obesity is at an all time high in this country. Twenty five million people have Diabetes and I think another 50 million are undiagnosed. Diabetes is the biggest killer after cancer and heart disease.  Except it can fall under heart disease and cancer as being clinically obese leads to both those diseases and as of yesterday a new report was released that Diabetes is now linked to Alzheimer’s. Diabetes is now an epidemic amongst kids. So basically being fat and eating sugary, fatty, foods is one of the worst things you can do for your health.

When Mrs. Nelly was pouring in the peanut oil at no point did she say, “If you don’t want to use one of highest hydrogenised fat oils, and you insist on frying and not baking your chips, try Canola oil. You may end up saving your toes.”

Nor did Mr. Nelly say, “You know instead of using white flour tortillas which have zero nutritional value and raises your insulin level in literally a heartbeat why not try corn tortillas or maybe even whole grain? Instead they toasted with Mai Tais.

The Nellys were immediately followed by the high priestess of fat Paula Dean. I know she is becoming a national treasure in many people’s eye’s. And she seems like a lovely woman, but with the health crisis we face  butter babe is not the role model we need.

Paula was there with her son and her fryer. In a span of 20 minutes I had seen more deep fryers than I had in years.

Paula started making deep fried okra while her son made the sauce out of cream cheese and sour cream. I left the room at this point and came back to find them making turkey burgers and grilled fries. I was impressed. I never expected that.  But Paula could not leave it there, with her only artery-clogging dish being the fried okra. She said and I quote; “Y’all can’t haaave a burger without a malted.”

She and her son then made chocolate malteds where they agreed that a pint of ice cream for two was the perfect amount.

What are these people doing? They are adding whipped cream and malted milk balls to a pint of ice cream and they are then telling America to do it too. Sure America, then jump off a bridge and see if you can float.

I understand wanting to make tantalizing food; but how about offering a healthy alternative while you’re at it?

OK, if you want to lose your sight, your leg and your kidney function try it with the pint of ice cream. BUT, if you want to stay healthy or get healthy try a smoothie with yogurt and fresh fruit.

America does not need ten hours of food programming telling them to eat ginormous quantities fats and sugar as a part of their regular diet.

BTW the Food Network has one show out of about 70 that is devoted to healthy eating. One.

Then the moment I was waiting for The Pioneer Woman rode onto the screen. I will say she has a better blogging presence than she does screen presence. PW if you are reading this, which you are not; quickly call Bill McGowan, media trainer extraordinaire and move in with him for a month.

PW did a brief tour of the ranch then gave a three-meal plan for her family.

It starts out with lunch for her homeschooled kids. Let’s not venture as to why she home schools them – oh let’s ~ she is a fundamentalist Christian, who doesn’t want them exposed to things like Darwinism.

So she teaches them at home and makes them chicken and pasta for lunch. Now that alone would not be so bad. Except, she cooked the chicken in a ton of butter. I think she is trying to out butter Paula. Then she took a gallon of whipping cream out of the fridge. I have never seen a gallon of whipping cream. And she said, “I don’t believe in milk. I don’t believe in half and half. I only believe in heavy cream.”  And with that she poured enough cream in the pan that  it looked like a BP spill only white.  She may not  believe in evolution but boy she believes in heavy cream. I hope she believes in stents, as her family will need them at some point.

She also did not serve one vegetable or fruit with this meal. So while she was clogging their arteries she was not giving them anything that might do them some good. Along with evolution she clearly doesn’t believe in the food pyramid either. If  her kids actually went to school they might learn about it.

She followed that with dinner for her husband ~ a beef sandwich, the only vegetable being some arugula she tossed on hers.

And breakfast was fried bread and egg in lots more butter. Sounds like 24 hours of artery clogging fun to me.

Jokes aside, this is serious. People take their cues from TV stars. Paula Dean is a big star – in the South she is  a phenom. The Pioneer Woman has hundreds of thousands of fans; people will think  if they do it, it’s OK for me too.

The Food Network and these chefs must take some responsibility or as Ricky used to say to Lucy,  they have some serious splaining to do.