Did I bring back a tattoo from New Orleans or just some chicory coffee?

WHAT WOULD JACKIE ONASSIS DO?

I guess I have been keeping the chad hanging long enough over the question of whether I got tattoo or not.

The truth is this whole tattoo thing was not spur of the moment. I have been pondering getting a small, tasteful tattoo for some time. Now there are people who feel the word tasteful cannot even be juxtaposed with the word tattoo and there are others who love them so much they feel to keep them small is a waste of valuable real estate.

But I have played with idea of getting one, though nothing outrageous.  I love a good Ganesh, but it’s hard to keep them tiny. I think my children’s initials peaking out from under the cuff of a good silk blouse has a certain je ne sais quoi. I kind of like the idea of a butterfly hovering at the end of my spine: Even though Taylor told me this is known as a “tramp stamp.”

Lucy told me I was too old and too wrinkly. And I was going to only get more wrinkly and what would my tattoos look like then?

But I do love the idea of being a hip old lady and showing my grandkids my tattoo, wrinkly or not.

So when I was in New Orleans last weekend and  John Berendt and I headed over to Jacci Gresham’s Aart Accent Tattoo Parlor, I thought this might finally be the perfect time to get one.

So as we were strolling over I started thinking what design might I choose?  And did I have enough Tylenol on me?   Then, I asked myself the question I often do when I’m faced with a decision I think may not be the most, shall we say, elegant and veers into the more flamboyant side of my personality.

There is the me who tries to be chic and then there is the side of me who is often drawn to what Glenn calls schlock. I like to refer to it as my “Inner Cher.”

And sometimes, when I feel my Inner Cher taking over I ask myself a question someone told me to use years ago, when you are not sure if something you are about to do or buy is not in the best of taste, ask yourself  “What would Jackie Onassis do?”  Would she buy the silver sequined coat in the window of the second hand shop that caught my eye this morning?  No way. Would she take off three of the nine rhinestone bangles and the leopard tights before she went out to dinner? I think so.

So when I was on the fence vis a vis getting the tattoo, I decided to ask myself would Jackie O have gotten a tattoo?  The answer is a definitive no.

But I really cant’ go on that, as let’s face I do so many things she would find appalling. Forget the leopard tights, she would never broadcast her every thought and action the way I do. Well, I keep a few things to myself. But you know what I mean.   To invoke the rule some of the time and disregard it the rest seems a bit disingenuous.

Jackie O under no circumstances would head off to the French Quarter and have something tattooed on her  skin. I had my instant out.

But my inner Cher kept whispering in the other ear, “It would be so cool. Look how good Angelina looks in the Valentino  couture gowns with the serpent wrapped around her arm.”

Shut up Cher, I’m not Angelina, nor am I Jackie Onassis.  I’m me and the bottom line, taste, shmaste,  I’m afraid of pain and infection.

So when I got to Aart Accent and talked to the other Jacci; Jacci Gresham about the whole experience she was really honest with me. She is a no bull shit terrific woman and looks great in tattoos. But she is totally upfront about all of the possible issues.

First off the back of her T-shirts say, “Yeah!  It hurts.” I like that ~ honesty in advertising is hard to find. But people who are devoted to tattoos take a certain pride in baring the pain. It’s like the women who refuse the epidural during childbirth.

Jacci Gresham showed me her latest tattoo.  She had  come  from Vegas where she went just to get it.  I asked her if it hurt.

She is too polite a woman to look at me and say what she had to be thinking, “Are you nuts?” She told me she took two pain pills first and they didn’t work. And I was worried about Tylenol???

Then I asked her if she had to have it bandaged and did it bleed?  I wanted the real facts.  She skipped over that and told me her foot was hugely swollen for a week.

That was it, at that moment, it went far past what Jackie Onassis would do – stay away for aesthetic reasons:  Or what Jacci Gresham would do, fly to Vegas to have one of the countries top tattoo artists spend seven hours injecting her with die and drawing an intricate design all over her leg. It came down to what Tracey Jackson would do.  Tracey Jackson has antibiotic ointment in her bag at all times – just incase she or anyone around her gets a cut.  She also carries several Benedryl at all times incase she or anyone around her goes into anaphylaxic shock. She carries four sizes of band-aids and two types of antacid,  plus Tylenol and Aleve.  She takes three different antibiotics in her carry on whenever she travels.  Her inner Dorothy Jacobson( her own grandmother) wins out when it comes to matters of health and safety.

Once I heard the real painkillers didn’t work and her foot swelled up the tasteful versus hip question disappeared entirely.

I was happy to interview Jacci Gresham and admire her tattoos. And even though part of me would love a little butterfly flapping on my coccyx, I will have to express my inner Cher in the form of bargain purchases like the fake fur purple vest from the Kim Kardashian line I got last week.

I’ve worn it once and felt cool for the first half hour, after that every time I looked down at it, I said to myself, Jackie Onassis would never have done this. 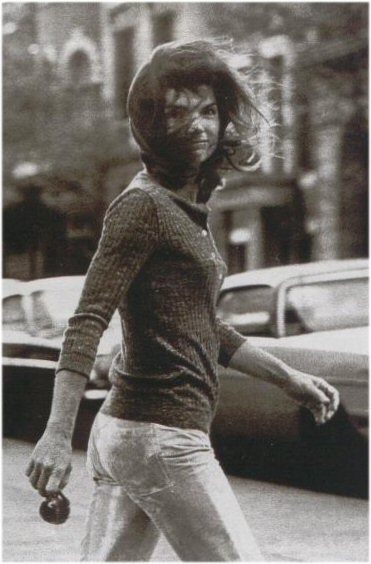 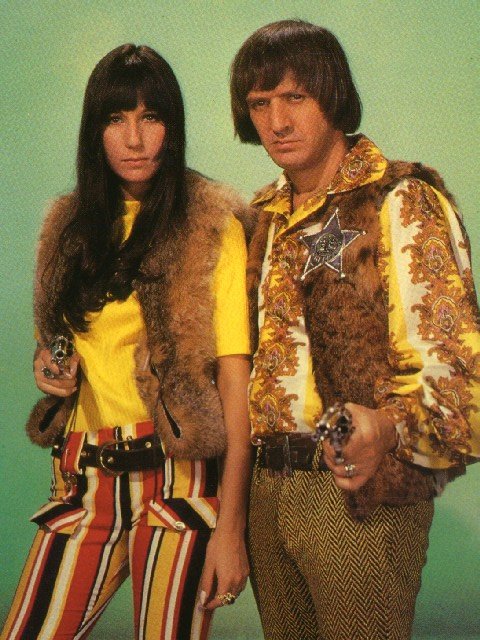 And am capable of this, minus the gun. I would never get Glenn in Sonny’s outfit.

Tune in tomorrow for my 50@50 interview with Jacci Gresham and see what a super cool 64 year old has to say about tattoos and life after 50 and in general.