Yesterday Taylor and took part in what has become one of our annual holiday traditions. We went and spent the afternoon wrapping presents for the Brooklyn Children’s Holiday Fund. Now off the top it sounds like another charitable organization that galvanizes various forces each year and gives out gifts to children and food to families that would otherwise go without. And to most people that is exactly what it is. But for us there is a bigger story attached.

SOMETIMES IT TAKES A PERSON TO MAKE A VILLAGE 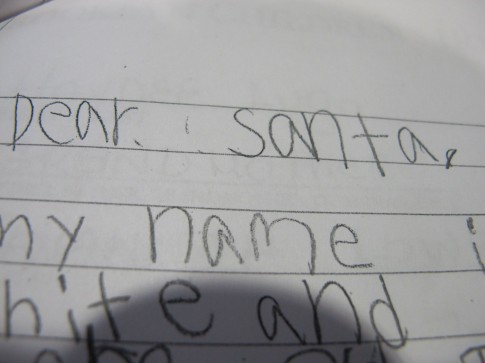 Yesterday Taylor and  I took part in what has become one of our annual holiday traditions. We went and spent the afternoon wrapping presents for the Brooklyn Children’s Holiday Fund.
Now off the top it sounds like another charitable organization that galvanizes various forces each year and gives out gifts to children and food to families that would otherwise go without. And to most people that is exactly what it is.

However, this group is very important to me because it essentially started in our house, not by me, not at all by me.  My participation over the last eleven years has been merely writing checks and wrapping gifts; and in the early years turning my living room in Santa’s workroom for several weeks.

The formation of this group is a true example of how one person wanted to make a difference for a few people and now a full-blown charity exists. It shows an individual can form a village.

That  person is one Emma Harrison. Emma was Lucy’s nanny from the time she was four months to four years old.
She is a plucky, take no prisoners, warm-hearted girl, who…oh, the story of how she came to us is too long, but to us she came, a real life  Mary Poppins.
Emma is one of those people who finds things to do and places to go and interesting things even when they are hidden to the average eye. She seeks things out and makes them happen. She loves children and all things that involve them. 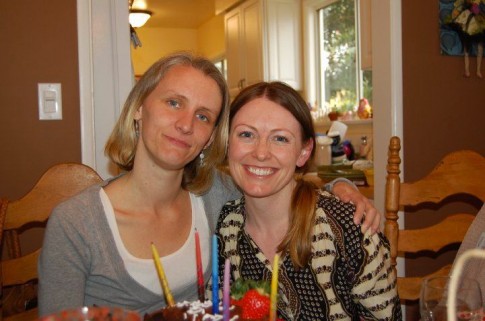 Emma Harrison and Kate Gange another one of the founders of the original group.

The first Christmas she was here she came into the house carrying a small stack of letters. She said “Tracey do you know about these?” They were children’s letters to Santa, one more heartbreaking than the other. Some of the letters were written by mothers for their children, single mothers for the most part who could not afford to give their kid’s food some of the time much less Christmas gifts. Sometimes they merely asked for food, or a blanket or a coat and diapers; things we take for granted. Christmas for them meant a winter where they might be warm and a day when they might have a good meal.

Emma found the letters at the main Post Office. She had heard on the TV that there was a program called Silent Santa, where kind hearted souls could venture down to the Post Office,  take a letter from a family and make their wishes come true.

That first year we sat at the table weeping, I told her to go get more letters we had to take care of several families.

She said picking them out was virtually impossible; there was so much need. She would disappear for hours and sit in a corner of the Post Office by herself pouring over hundreds of letters; she would inevitably come back with families that all had babies.

It was ten years ago now and I don’t remember how many families we either did ourselves or forced friends to do.

Emma, who is a great bargain hunter, in fact her Twitter is @BargainBrit, went off and found toys and clothes for great prices.  I remember in those early years, I felt the moms should have gifts too, so I got make up and things I knew would make them feel like Santa cared about them as well. But Emma was the Silent Santa; I was a lowly elf.

Emma thinks ahead and no sooner had the New Year arrived and she was collecting items for the next Christmas. She got wrapping paper on sale right after the holidays, and coats for half price in the dead of winter. It was snowing and she was preparing for the next year’s onslaught of letters. When her closets were full, the over flow came to ours.

I have this memory of our living room piled high with toys, and coats and Huggies in little groups devoted to each family. And Emma knew exactly what went to each kid and where it was. Sometimes we would hear her yelling ‘Who took Esmeralda Garcia’s Barbie car and put it in with the David Jone’s Thomas the Train books?
And then for nights on end she would wrap. We would help as there was soooo much.  At a certain point I would get tired and my wrapping would get sloppy, “They have to look perfect.” She would scold me. “I’m doing the best I can. Have you ever tried to wrap a giant Dora the Explorer?” That was not an excuse for Emma, if they were not going to be perfect I could go upstairs and she would do it. And many nights she did.
By year four she decided she not only needed help, but this was should be a full-blown charity. At that point I think she got Merrill, Jennifer  and her roommate Kate involved.
The elves left our house and The Brooklyn Children’s Holiday Fund was born.

The letters are no longer picked by quivering heart strings from the piles. The families are members of The Community Center of Red Hook. And the holiday gifts are a reward for completing a series of classes in nutrition, childcare, literacy and health care.

Today the group is made up of seven women. Merrill Pond and Jennifer Conners are the leaders and Karen Marychak, Laura Metzger, Stacey Douglas and Michael Thiel make up the rest.

Emma no longer lives here, but what she started is thriving. This year they had so many volunteers to wrap they had to turn people away.
Through their fund raising and donations they raised over $15,000.

Yesterday gifts were wrapped for 31 families and a total of 87 children. Each child was given coats, mittens, P.J’s, books and toys. Their letters to Santa were answered. Pantries will be filled with food, that perhaps would be empty or close to it if not for the efforts put forth by this little village.This little village that started with one English girl, with a big heart and the desire to make a few children’s dreams come true. 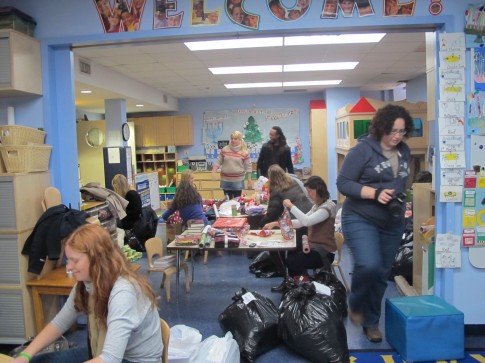 Groups of wrappers rotate all day long at a pre-school in Brooklyn. The blonde in the way back is Jennifer Conners. 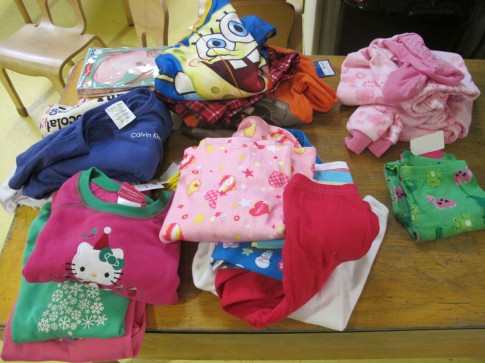 P.J’s waiting to be wrapped. 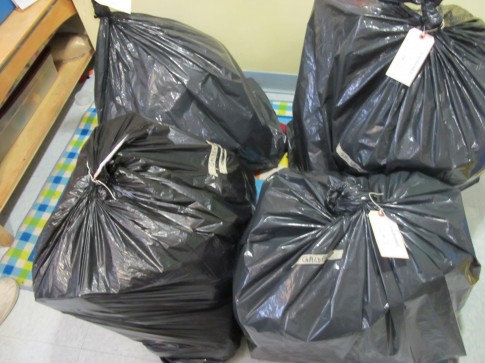 Each families gifts are put into large bags. Each kid pretty much gets a bag full of gifts. 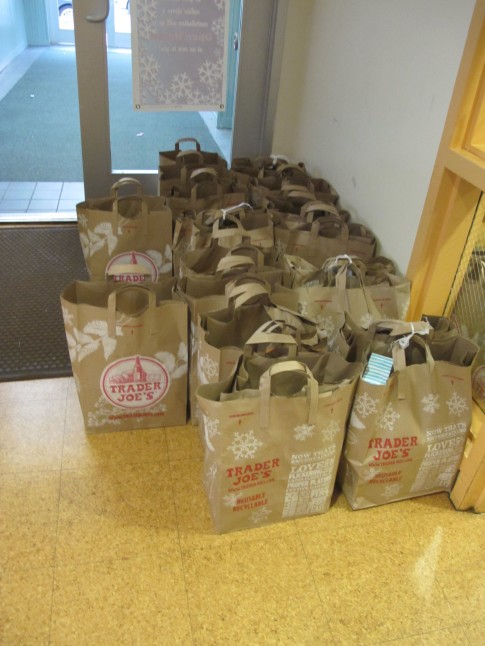 Food waiting to be delivered. 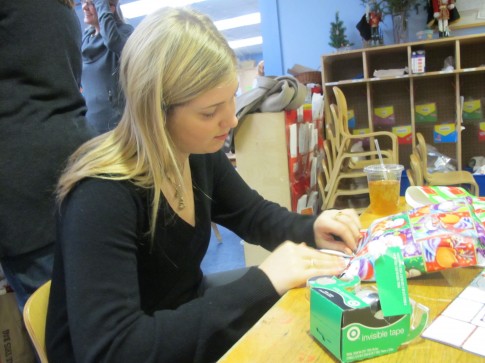 Taylor has now been doing this since she was eight. Lucy does it too, but was at a rehearsal. 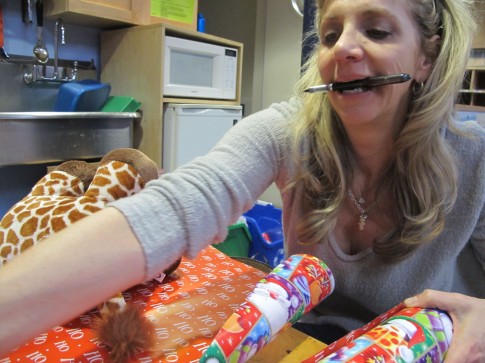 Emma would not have been happy with the way I wrapped this giraffe. Have you ever tried to wrap a giraffe?

Next time you think one person can’t make a difference think of this story.