In all trips there comes a time or a day when every one just sort of has it with crowds and schlepping and lines and waiting and not speaking the language, over paying for silly things and in this case just being so damn cold you think you're going to pass out. Yesterday was one of those days.

ONE OF THOSE DAYS

In all trips there comes a time or a day when every one just sort of has it with crowds and schlepping and lines and waiting and not speaking the language, over paying for silly things  and in this case just being so damn cold you think you’re going to pass out.  Yesterday was one of those days. In fact one of the reasons I’m not posting this tonight is my internet in the room just expired and I refuse to pay thirty dollars for three hours as we are leaving early in the morning.

One does not want to complain as we are beyond lucky to have all the experiences we do in our travels and our life, but the days when you don’t just go “Oh everything is perfect “are without question more amusing to write about.

Yesterday was one of those days.

It started night before last when we went to dinner. I had specifically asked the Concierge to make a reservation at a place that was typically Czech, no tourists, real local food.  We were assured that the place she booked was exactly this, so when the taxi, that for a change did not cheat us, the taxis here are nightmare. they over charge like you can’t believe and you are so cold sometimes all you want is a ride and they know it, so when they quote you something insane to go a short distance they have you.

Anyway, when the taxi on the meter pulled up in front of a place that had a big Coke sign and the drinks written on the side in English, and offered such dishes as New Zealand Lamb and  Rigatoni Bolognese, I knew we were in for trouble. But then we walked in the dining room and the entire place was wall to wall Japanese. They had just dumped a tourist bus of them and they filled the room. Now I like the Japanese, and I like eating with them and their food and I adore Japan. BUT NOT IN PRAGUE.  I told Glenn we had to leave immediately. He said how would we do that? I said call a cab. But they would cheat us, I said i didn’t care, how would we have gotten home after we finished eating our suckling pig with the crowd from Osaka? I said pretend we finished and are leaving.  He didn’t want to stay anymore than I did so he did it.  He had them call us a cab after we had a drink to be polite.

We lucked out and got a funny cab driver .  He didn’t cheat us and he took us to The Cafe Savoy, a place where locals go and we got the meal we wanted and it all worked out. I would have been seriously upset had we been stuck in the other place.

This morning we were going to hit the road early as we wanted to see the Prague Castle. Now according to Glenn who quoted the Guiness Book of World Records regarding this five times, the castle is the biggest in the world. Now it does not look like that when you see it. But if you take the two to eight hour tour you do in fact get to see the whole thing, which I guess would prove it to be the biggest castle in the world.

We all started getting into cranky mode when we got there. The line was really long to buy the tickets.  Glenn and I didn’t want to stand in line and it didn’t look like a castle to Lucy and quite frankly we were so cold crunching around a castle for four hours was pretty unappealing. So we took the OK we’re here, we saw the outside, we’ll do a quick lap around the church and then  lets walk down the hill and not bother. I think had the line to buy the tickets been shorter we might have gone ahead but at that point none of us were into it. 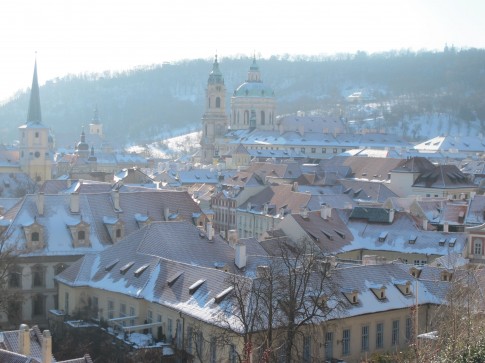 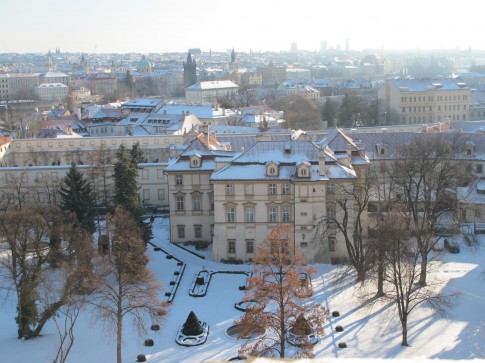 There were several things that started to wear thin aside from our coats, I really cannot tell you how cold it was, snow shmo, it was way too cold to snow. Taylor and I were so cold we were nauseous. and then the thing is when you’re cold all the time you have to pee a lot. Well, the Czechs need to build their economy after all those years of Soviet rule and one way is the “pee fee.'” Anywhere you go to go, they want some money and it’s not only annoying but becomes difficult to accomplish first off they want some lame amount of coinage you don’t have as you haven’t figured out the currency properly, secondly your fingers are frozen stiff and to dig through your purse, when you are frozen solid and have to pee is almost impossible. I would thrust a bill at someone and ask for change and they would refuse. There were people there, not all people, but many who were just plain grumpy. There is that type of Eastern European gruffness that also wears thin. I don’t want to generalize, but it’s true and I was talking to a nice Czech woman and she agreed with me. She said try and date these guys.

I feel guilty for saying this at all. I think I would be cranky too if I lived there all the time. Hell, I can be cranky and I live in Manhattan.

At six this morning when I woke up and looked out the window into the pitch blackness (that was just as black two hours later when we pulled out of the train station,) and I saw the trolley car go by with people bundled up and headed for undoubtedly tedious jobs, perhaps even being the lady that sits and asks for money to let frozen tourists pee, I  felt badly for them and annoyed at myself for getting frustrated and impatient. Life there is still very hard, the place is pretty, but the day to day is not easy for most. It’s better than it was, but it’s a long way from being Switzerland.

Face it life is hard for too many and one of my resolutions as it is every bloody year is to try and have moor patience.

But yesterday no one in our family had much and I think the cold had a lot to do with it.  When it’s that cold at home, which it almost never is, come on how often is it 2 degrees? You stay inside, you don’t walk around like a fool for six hours.

Anyway, so we walked down the hill from the castle and past all sorts of individual palaces we should have seen. We ended up at this wonderful spot for lunch, and proceeded to have two glasses of wine, something I never do in the daytime, but I figured it would thaw me out. It did. It also made me slip and fall according to Lucy, which is so not true. I did slip and fall but that was due to black ice. It did not help my mood to land on my butt on the street.

After lunch we wanted to see something called the Black Madonna Building which is four floors devoted to the Czech Cubist Movement.  Well, that only took two hours to find as no one would help us.  Don’t get me started on that. We did walk into one information place and asked the girl who worked there and she said she only sold information pamphlets she did not verbally give it out information.   She had to know where it was, it’s very well known and a small town.   We went down to the office she said to go to but it didn’t exist, at this point I was turning into airport Tracey and could not feel my fingers and only wanted to be warm, and honestly I have not spent one second of my 52 years ever thinking about the Czech Cubist Movement, so to get hypothermia looking for it seemed silly.

We did finally find the place and took the lift to the top, it was an extraordinary building, but there was one of those grumpy, warden women who said we had to pay downstairs to see upstairs, I thought it was a gallery, it was a museum.  At that point Lucy and Taylor staged a mutiny and we decided to make due with the gift shop.

We found one of those taxis who doesn’t have a meter and charges you ten times the price to drive you a quarter mile and went back to the hotel, by then it was four and pitch black, the girls refused to leave their room.

Glenn went down to the bar and had a cigar and I actually took a nap, I was so cold I couldn’t stand up anymore.

Despite all that I found Prague to be a charming city and will most likely not remember my frozen bones and the fact I think I am developing arthritis, it will be like child birth I will only remember the good parts of which there were many.