Elmo, Sonny Mehta and why I must keep it short.

THE NON BLOG BLOG and THE NATIONAL BOOK AWARDS

So this is the story, I can’t really write a lot as I have a problem with my eyes vis a vis the computer.  I’m waiting for my new glasses, but due to too much time in front of the screen and my advanced age, plus the fact I thought I had been to the eye doctor in the last year, but it’s actually been three, I have developed a stigmatism and the need for much stronger glasses.

Of course what this has meant is for the last week I was convinced I had a brain tumor. Now I’m not making fun of people with tumors, but if you know me really well, you know to know me is to know a week is not really a week unless I am convinced I have some form of cancer.

Glenn is convinced it has to do with my parents and self-annihilation.  One of my relatives reminds me it’s because I grew up with a wacky group of uber-hypochondriacs. Whatever it is, I always said my first book would be called DOES THIS FEEL LIKE A TUMOR TO YOU.

But the eye doctor says I’m fine I just need to spend less time on the computer until the new glasses arrive: That will not be until Monday.

And here I am writing anyway, but I decided I needed to blog, so I will keep it brief.

Last night we went to The National Book Awards. I must say it was fun, even though I was convinced I had Alzheimer’s (my  other new favorite disease) on the way over; ,as I kept forgetting my trend of thought. This of course  also dovetails into brain tumor territory.

But the first person I saw when we got there was New York’s most divine man Sonny Mehta. So I forgot my disease du minute, and chatted with Sonny. That was swell as always. And then, this is beyond stupid, I did not get a photo of us together. There we were, me standing with the oh-so- fabulous Sonny Mehta, he in his Nehru black tie wear and I was in this really cute, black, sequin blazer that had a kind of Liza with a Z quality and I forgot to have Glenn take a picture. I did think it sort of lame to say; “Hey Sonny let’s get a photo” He’s not that kind of guy, but I’m sure he would have humored me.

So, I go to the National Book Awards, where Patti Smith won and Tom Wolfe spoke, I spent 15 minutes with Sonny Mehta and all I have is a photo of Elmo. 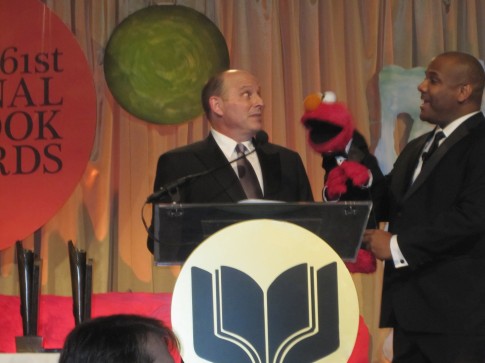 Yes, Elmo that is what I have. What might you wonder was Elmo doing at the National Book Awards, well Joan Ganz Cooney got an award and he was there to give it to her.

And while this was going on, from across the table I heard Glenn say, “Get a photo.”  I turned around he motioned for me to take my camera and shoot a photo of Elmo. Who knows why? He didn’t say it while Tom Wolfe was on stage.  Perhaps he is thinking of selling Elmo’s papers to Texas.

So this is what I have, the top of Andy Borowitz’s head, Elmo, his handler who is great, and the bald guy whose name I forgot and so did Glenn and I can’t Google it so he goes unidentified.

The night was memorable. We were sort of rooting for our friend Nicolle Kraus to win, she didn’t, that sucked,  I would have been happy for Peter Carey too, oh well.  I’m now at 644 words and getting a headache.

Time to stop. Next time I will get a photo of Sonny Mehta and remember to get my eyes examined each year.