In New York the Christmas windows in the department stores are a big deal. People line up around the block in an almost Space Mountain queue to see the  windows at Saks Fifth Avenue. Groups stand slack jawed in front of  Bergdorf Goodman staring at their creations.  And most of the windows are covered in black paper for at least a week while the window elves do their thing.

Every year without fail, my favorite windows are Simon Doonan’s madcap creations at Barney’s. He has what every one else lacks ~ a sense of humor. I can’t stand the sight of sugar plum fairies one more year or Santa making his way around the Saks window on a make shift sleigh.

Doonan’s windows always have a theme and it’s always tongue in cheek and always spectacular and they just sort of appear.
The other night we were walking home from dinner and there they were.

What I love about the windows this year is Doonan has picked up on the theme that chefs have become our new rock stars.  There is no question this is partially or perhaps a lot thanks to the Food Network that makes an over night sensation out of a chef who doesn’t even have his or her own restaurant half the time.

I didn’t even know who Paula Deen was when I got to Savannah earlier this year. But one stop at her establishment and it was made clear to me that Deen has an almost Elvis like reputation in the South.  There is no question she must be the patron saint of butter.

I see it with my kids, last year all Lucy cared about was Robert Pattinson of Twilight fame; she would have done anything to meet him. This year her tween focus seems to be on Buddy the portly baker from Hoboken who is the star of Cake Boss.

And Taylor who for the most part doesn’t cook is obsessed with pastry chef Johnny Iuzzini ( I personally have never heard of him)  and will never miss an episode of Top Chef.

I also find it strange that an entire generation will only know of Salman Rushdie as the guy who was once married to Padma Lakshmi. Forget the fatwa, forget Midnight’s Children, the fact he won The Booker  or the entire body of work, for many he’s merely  the dude Padma dumped.

So this year the Barney’s windows are whimsically filled with our new super star chefs and they are just wonderful.  Thank you Simon for always getting it, for not taking life or Christmas too seriously and always making us laugh. 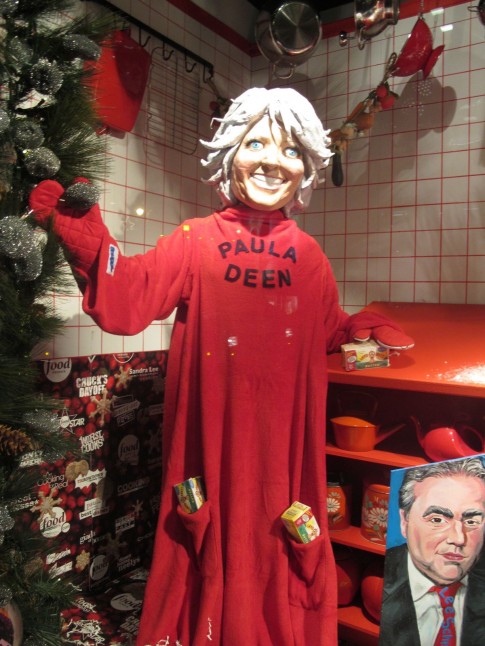 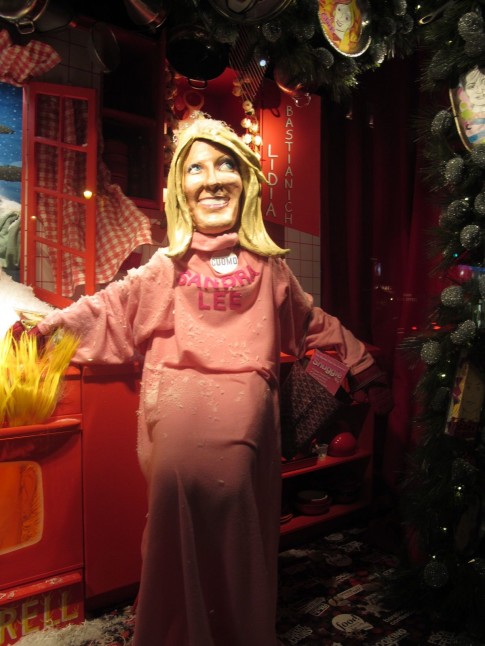 Sandra Lee – I actually had to Google her. She has a show called Semi  – Homemade on the  FN. 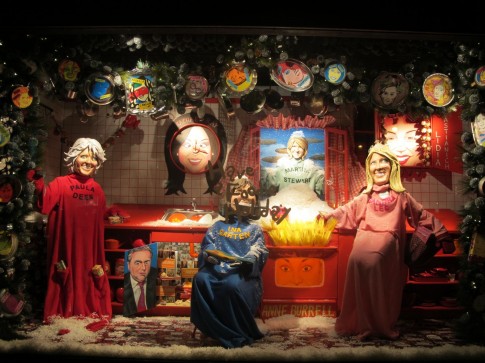 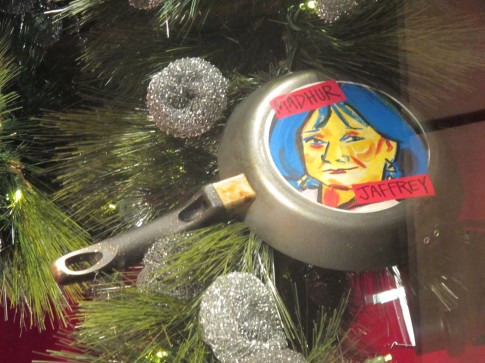 Madhur Jaffrey  got in! As well she should… 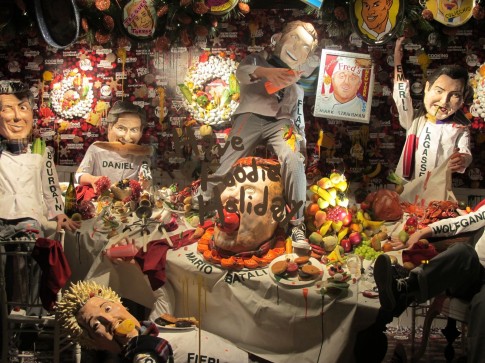 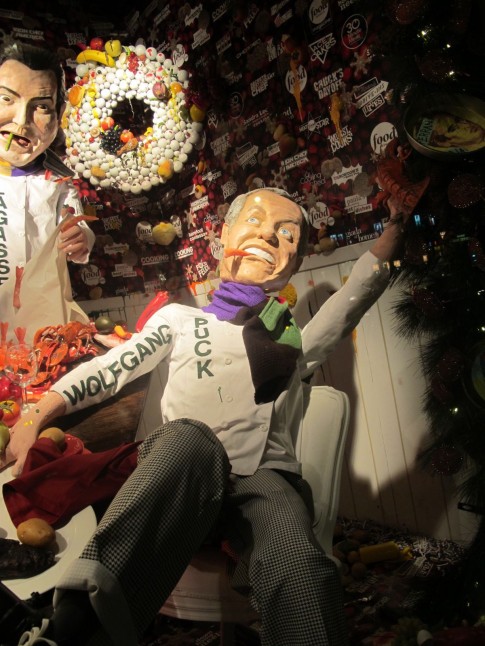 The only one I can honestly say “I knew him when” But when was a long time ago and he was one of the  first who took chef to household word in this country. 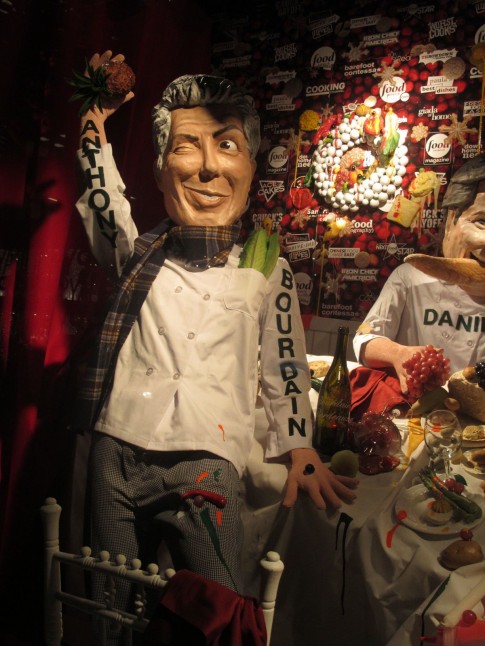 I have had his food and was not impressed, but loved his books Kitchen Confidential and A Cooks Tour. 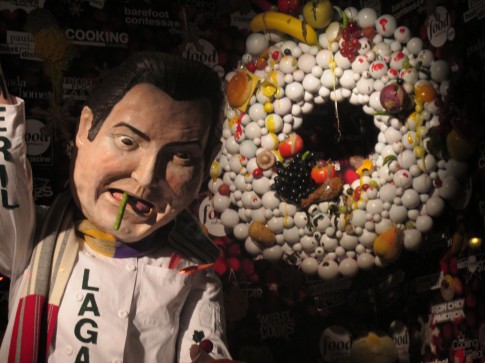 I’m actually going to his restaurant in New Orleans next week and am pretty excited. Oh, no am I becoming a FN groupie? 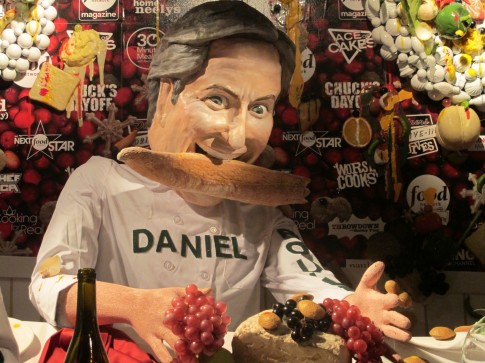 The real deal: In the old school French sense of the word. 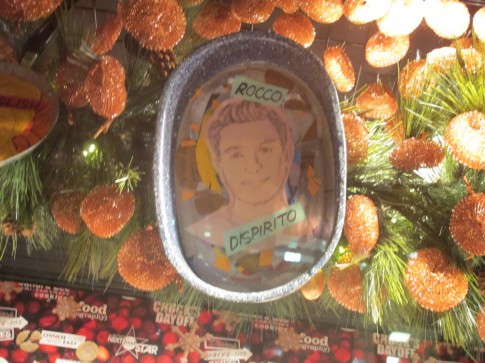 My guess is he couldn’t be very happy to be reduced to a tin foil pan. 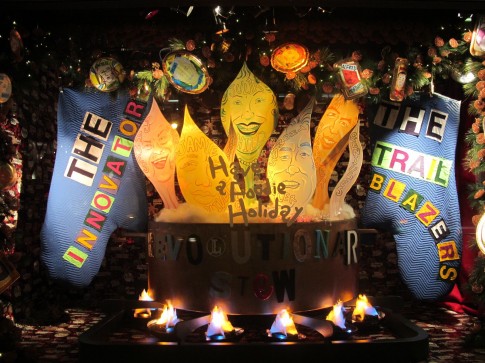 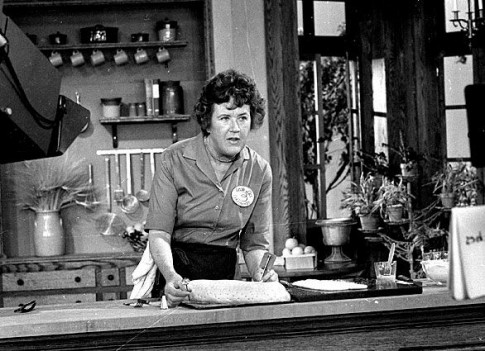