People try to decide whether the recession is over by all sorts of odd measures, but the one I think may be the most reliable, at least in New York, is the return of the restaurant bad attitude

IT’S ONLY FOOD – DROP THE TUDE

People try to decide whether the recession is over by all sorts of odd measures, but the one I think may be the most reliable, at least in New York, is the return of the restaurant bad attitude.

For a while there when things were really rocky, and heaven knows they still are in many places, but here in New York, the restaurants that have historically been dripping with ”tude” were actually nice.

Well, I am here to report that the tude is back

One of my big pet peeves is restaurants that treat you like shit when you try and book a table. My experience of a place starts when I make or in some cases try and make a reservation.

That  “You can come in in four months at four am” thing turns me off of a place forever. I make a vow never to go to that establishment. This is my motto, it’s only food and quite frankly with all your tude, whatever you make Rice A Roni is probably just as good.

I have never been to a place called Nobu. This may not sound like a big deal, but for people who know me and know Nobu, it might come as a surprise.  Well, no, cause when they opened I tried to get a table and they threw a whole fist full of tude my way.  I went, guess what I will never, ever enter your doors. Now, it means nothing to them, but it means a lot to me.  I think it’s been opened for 15 years now, I still won’t go.

So yesterday I was trying to come up with a place to go when my in-laws are in town next week. We always take them to the same places and I thought it would be nice to try something new.  I had jotted down the name of a place I read about on GothamGal.  Joanne Wilson who is Gotham Gal is a serious foodie and is always writing about new and interesting places. I called a place Osteria Morini.

OK – lets start with I’m not a dummy when it comes to these things, I was asking for Thanksgiving weekend, a table for six, I figured it might not happen.

I knew I was in trouble when I sat on hold listening to muzak for ten minutes.

When The guy at the other end of the phone finally picked up he was dripping with tude at first hello.  I asked if they had a table for six at around seven thirty on the 27th.  Full of sarcasm he responded, “You can come in at five or eleven.” OK. I should have just ended it there, but I wanted to give him the benefit of the doubt and it was a week away and it was a holiday weekend, and I did want to try the place. I glanced at my agenda and saw we have a dinner with my friend Rachel Sussman and her husband on December 11th, almost a month away.  A month away. Same schpeel, this time it was five thirty or ten forty five.

I passed on that too. At that point I said “Look why don’t you just tell me when I can come in.”  He then had the nerve to say “When do you want to come.” I said, “I told you when I want to come. You tell me when can I come that is not close to lunch or midnight”

He sighed like I was putting him out and said “Oh, well, I guess, (doing me a favor) December 16th we could do two people at eight.  Well, December 16th is our anniversary and we have other plans.

“What do you want from me? “ he whined.   What do I want from him? What I would have liked from him was a pleasant demeanor, willingness to help and what some people in his position have, the knowledge that they know this is lame, but it’s just their job and they try and make something work.

Instead you get how stupid are you to think you can come here anytime you want. We’re hot, hot, hot and I have six lines on hold.

I started looking through my calendar by then I was into the New Year.

I realized it’s only food, and there are a jillion places in New York that do food really well without the tude, and if all else fails I can always whip up a box of Rice a Roni.

I hung up the phone without saying a word.

I will never, ever go to Osteria Morini. 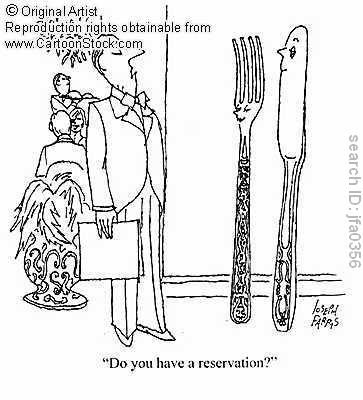