I have been on Face to Facebook one week today. I have hit four cities, seen eleven people from Facebook or the blog, either they have been people I haven't met or people it's been at least ten years - but in most cases over twenty since I last saw them. I have been to 8 independent bookstores.

I have been on Face to Facebook one week today. I  have hit four cities, seen eleven people from  Facebook or the blog, either they have been people I haven’t met or people it’s been at least ten years – but in most cases over twenty since I last saw them.
I have been to 8 independent bookstores.

Am I tired, well, yes..But it’s exhilerating and wonderful and I have twelve days to go.

Finally, today I got someone to admit I was not popular in school. I have been waiting for this. My friend Lynda Ellenshaw who I have not seen in sixteen years  admitted to defending me in the fifth grade when someone was picking on me. We had one real bully that everyone seems to agree hurt a lot of feelings and they have not been forgotten. But Lynda also thought she wasn’t popular and I always thought she was. Did we all think we were unpopular? And why do we all remember it so vividly?

Seeing Lynda was terrific. It’s odd we never saw each other as she has lived in LA since she got out of college and has worked in the film business as a special effects producer the entire time. We could have seen each other so easily.  Same city, same business and we never ran into each other or looked each other up.

She comes to this profession naturally as her father was the late Peter Ellenshaw who was an artist and  master of special effects decades before his time. He did all the special effects  in Mary Poppins and endless other Disney classics. If you you click on the link you will be amazed. So it’ makes sense Lynda would  follow in his footsteps.

It was great to see her, this cavalcade of people from my past is simply extraordinary.   As I drove away from her I got almost weepy, not because of saying good-bye but it’s like watching your life in slow motion and fast forward and rewind all at once. 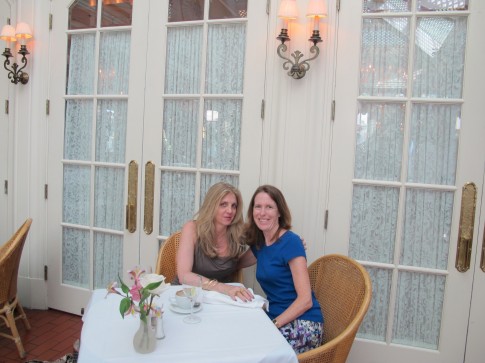 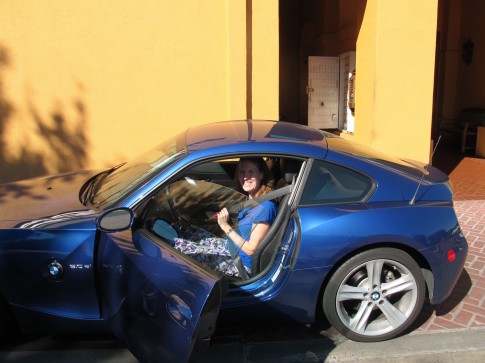 Lynda in her cool car.

Tonight we had the second annual Blakeapalooza dinner. Last year a group of us got together at Blake’s favorite restaurant La Scala to celebrate what would have been his 52nd birthday. Tonight the  same group assembled at the same restaurant to celebrate what would be his 53rd birthday this Sunday. It was remarkably cheery for what could be a sad occasion. We are a bunch of comedy writers so we can keep the temperature up. We told Blake stories, fantasized what he would do if he were there. Talked about how thrilled he would be to be an iphone app and just Blaked it up.

For me this is the beginning of what will be several events devoted to his birthday. Sunday which is his birthday I will be in Santa Barbara and take his mother to brunch. And then his good friend Jim Haggin and I are going to celebrate, well, you’ll have to wait to find out how.

This blogger is nackered as the Brits would say. And I’m sure I spelled it wrong, but I’m too tired to go into google and look it up.  But I’m sure some one will spell it properly for me in a comment tomorrow, or at least I hope they will. 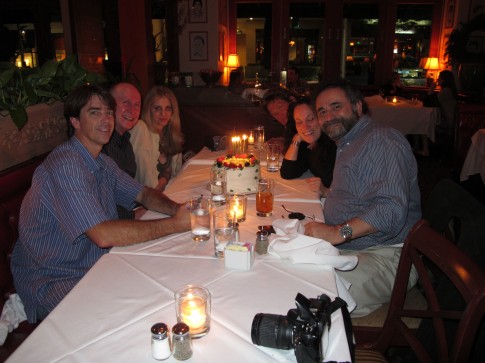