Today is the last official day of my sixteen day Face To Facebook journey.   The day really started at four am, which was not my plan as I had not turned out the lights until close to two. But here at the happy hipster W they have those little Tivoli clock, iPod docks that make these sorts of hotels appeal to the people they do. Well at four am my Tivoli clock’s alarm went off. Since they are so cutting edge and minimalist they only have one button, that button I can tell you does not shut off the alarm. I tried it like fourteen times and every two minutes the alarm would start beep,beep,beeping. I so did not want to turn on the lights,  I fumbled around in the dark and eventually pulled all the plugs out of the back, thinking I was very clever and that would do the trick, shut the little sucker up. Wrong, it had a back up battery, beep, beep, beep it went. I thought I was going to lose my mind, it was going on four thirty, I finally took it and put it outside my door, I could not think of anything else and I figured if they were so lame as to put something in here that went off and four and could not be shut down then it belonged it hallway. So I climbed back into bed, but the walls were not enough to  drown out the noise, I could hear it beep, beep, beeping as if it were still in the room. I figured if I could the rest of the floor could too and that was not fair to any of us.  So at four thirty five I called downstairs and told them they had to remove it from the hallway. I did get back to sleep but that deep REM was history.

I will say they partially redememmed. themselves when coffee arrived at seven thirty and it had a tiny cinnamon donut on the tray. 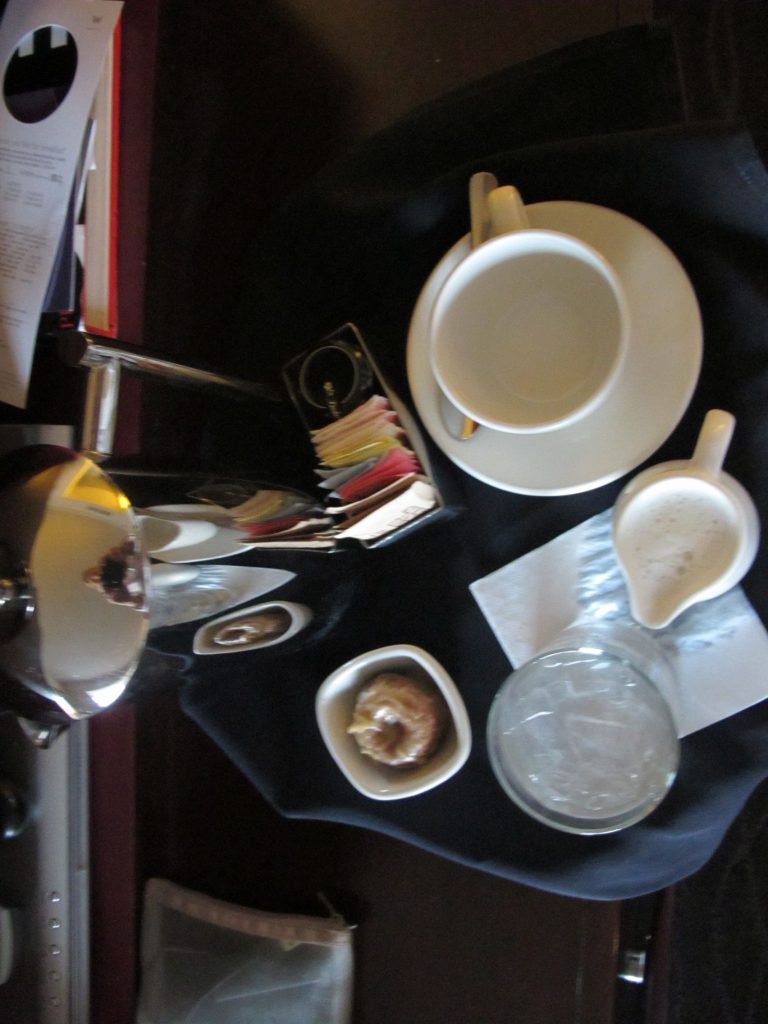 I met my old school mate Frank Catalano in the lobby at nine. Now to call Frank an old friend would not really be accurate.  He and I even admitted this morning that if we exchanged five words in our entire school career it might be pushing it. But like many we met on Facebook and you know Facebook has that way about it.

It turns out he was only at Laguna Blanca for a year.  But it was a small school and one tends to remember everyone. What I remember is Frank was sort of a geek. He would second this so I’m not being mean, I think he might have made me look popular by comparison. But the reason I can say this is the skinny kid with giant glasses who spent his year at Laguna hunched over his work diligently doing math problems has grown into a terrific man. He remained bright, he wasn’t going to lose that, but he turned out to be nice looking and  had a really interesting career in broadcasting that took him all over the country. He now works in marketing and consulting for software and tech companies. He worked at Apple at one time. He  is well travelled, really well travelled, he is funny and ironic and is maybe one of the surprises on  trip that has been filled with surprises. I was actually surprised that he even wanted to see me as like I say we really had zero contact in school. But he moved a meeting to make room for me and he we spent a lovely few hours not catching up but actually getting aquatinted. 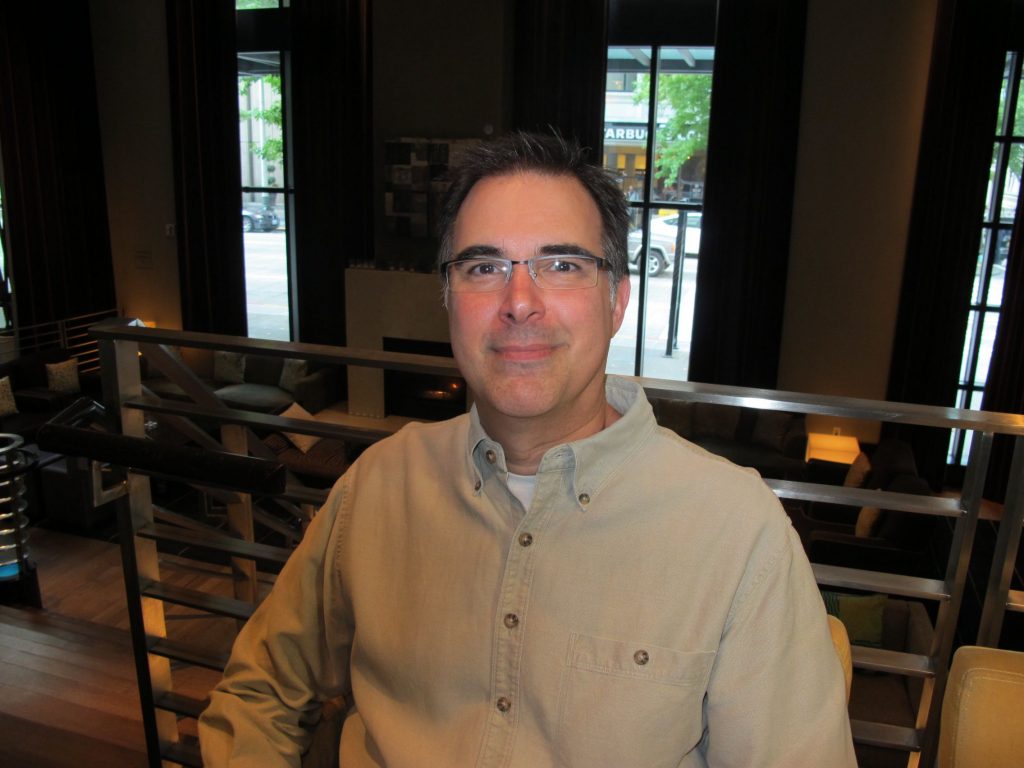 Former geek turned into attractive middle age man Frank Catalano. If he were single he’d be a catch, but he is married. Big lesson do not underestimate the geek, it can often times just be a stage. 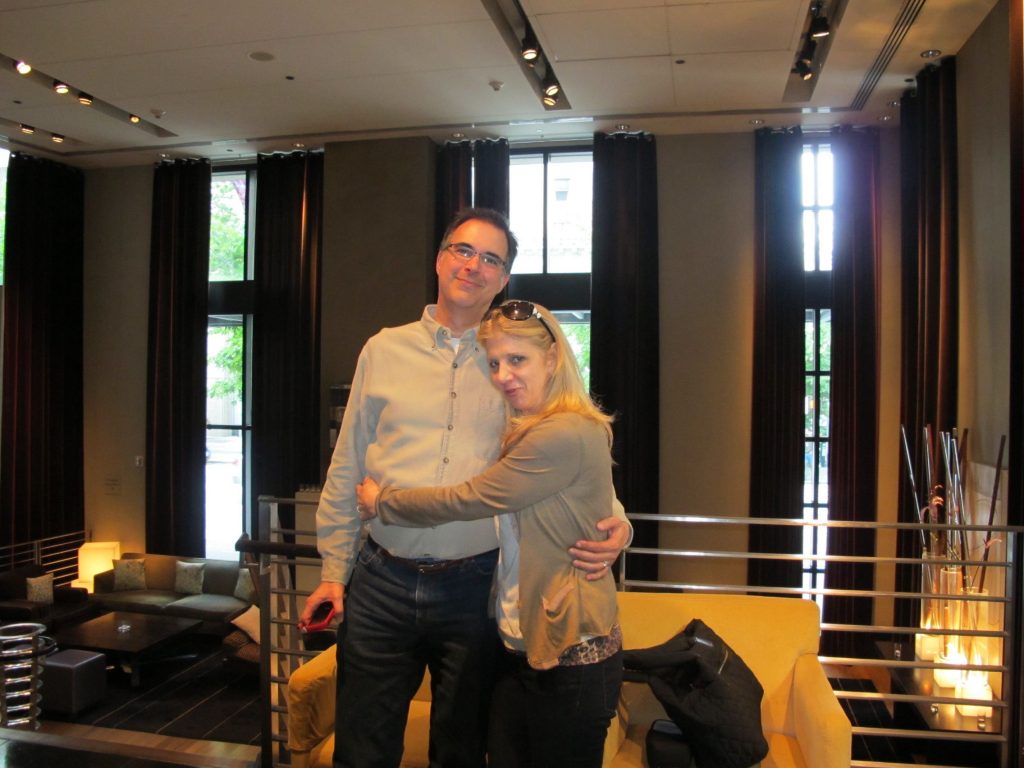 I had about twenty minutes between Frank and Cindy Bouchard. Cindy has been an loyal blog follower for over a year. She came to me through the world of Blake and after he died she found my site and we started communicating. It was always one of those things “if I ever get to your neck of the woods we have to meet.’ But the thing is I am not really in her neck of the woods, I’m  more in the belly button. She lives in Vancouver and she drove in to see me. I was blown away that she would do that. I’m not that interesting, it’s a long drive.  But at eleven am there she was, her husband Chris had some business to do so he dropped her off. 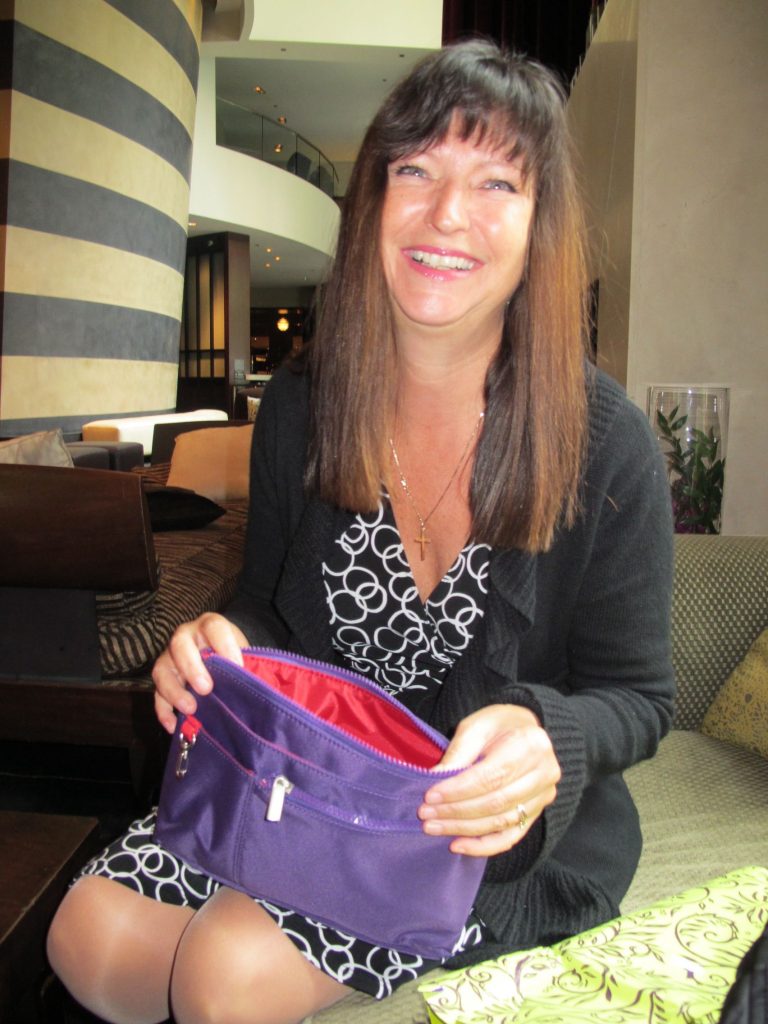 Cindy Bouchard with her gift for winning the “What did Glenn get for his birthday contest.”

She was such a good sport she pile into a cab with me and went on all my bookstore visits. She made if so much more fun as I have been doing this pretty much on my own except for Menlo Park. 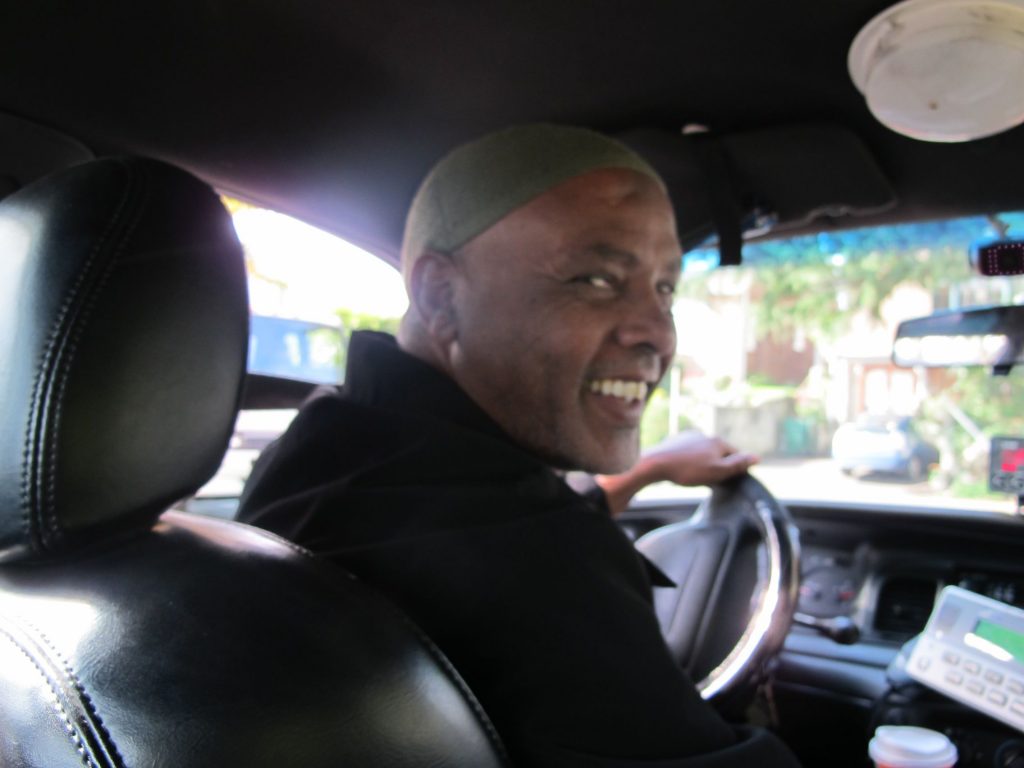 Today we were in the capable hands of Ali, another Taxi driver who let us stay in the cab and took us all over Seattle. 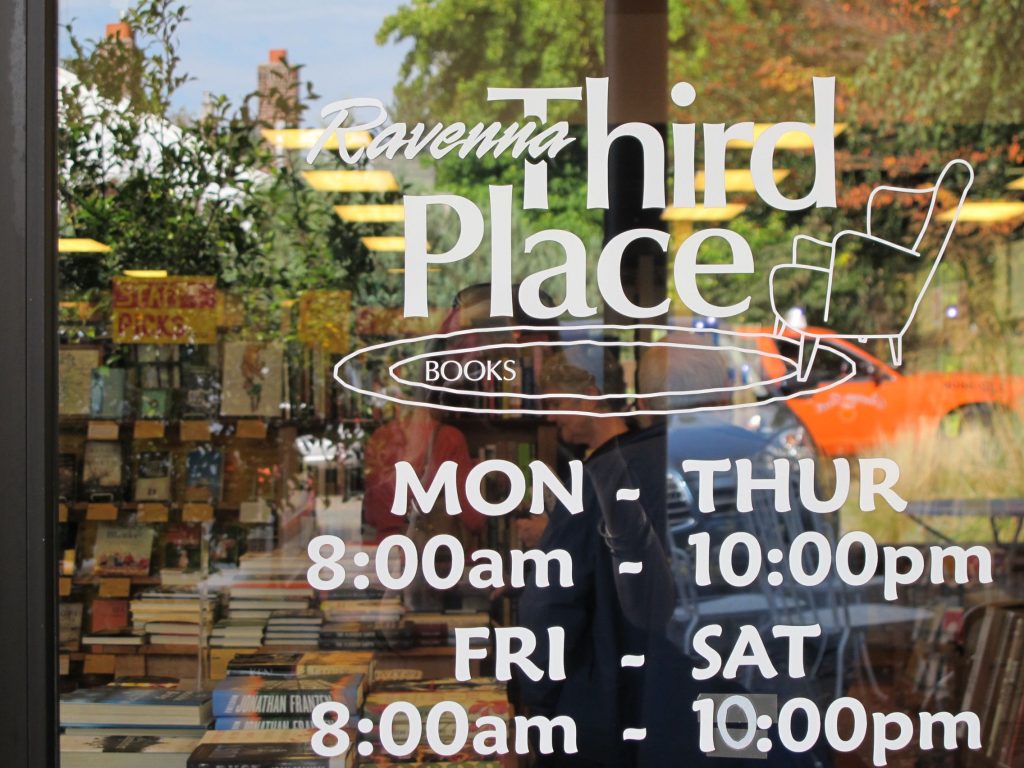 We then stopped at a lovely bookshop called The Secret Garden but half way to our next stop Cindy reminded me I forgot to take a picture. Next time.  We made up for it at Santoro’s Books. 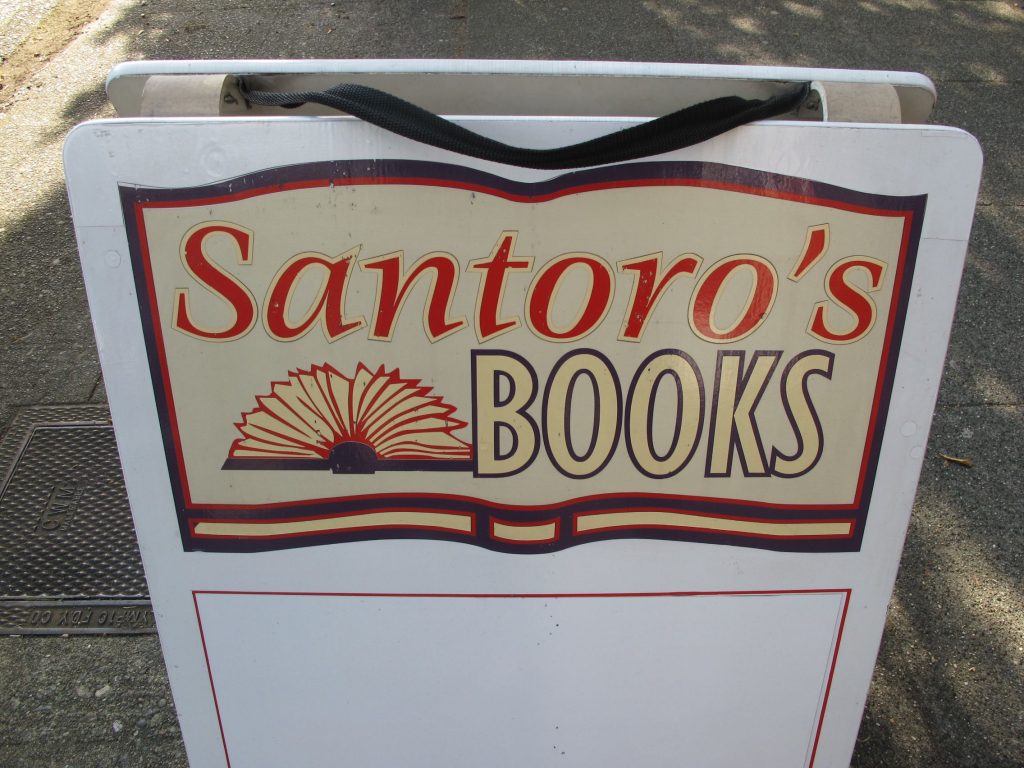 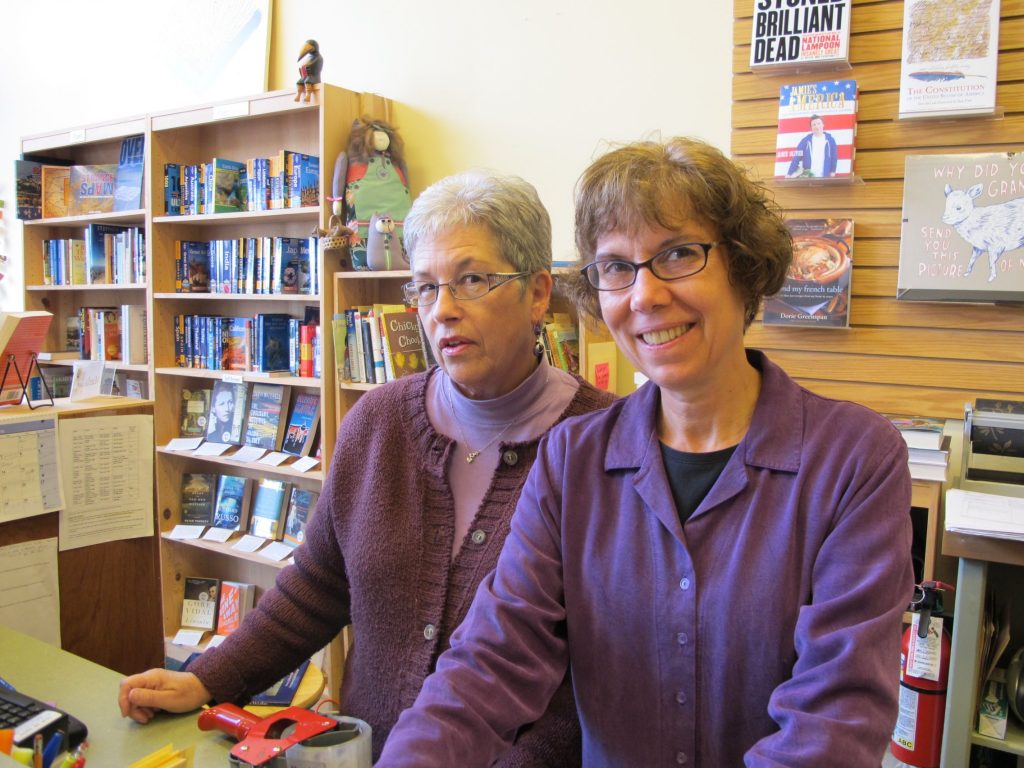 Owner Carol Santori and Gretchen Echols. No they do not always wear the same color it was a coincidence. Today again, everyone was terrific. Carol turned me on to NorthWest writer Jim Lynch and I bought his new book Border Songs. 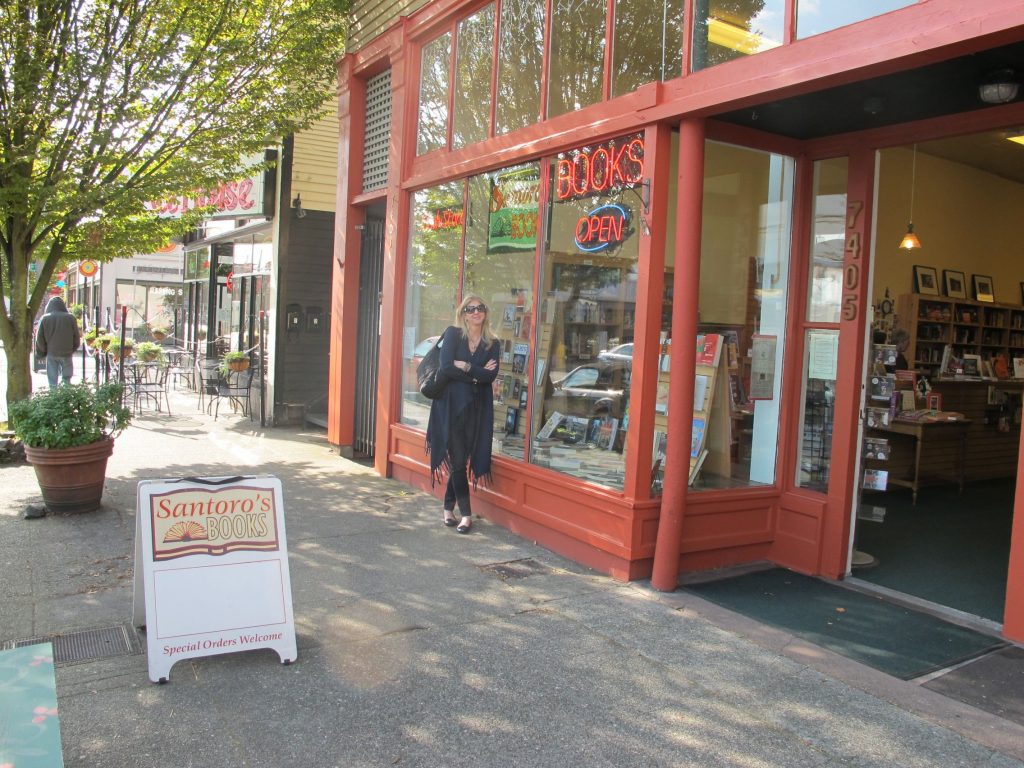 We moved on to Fremont Place Book Company 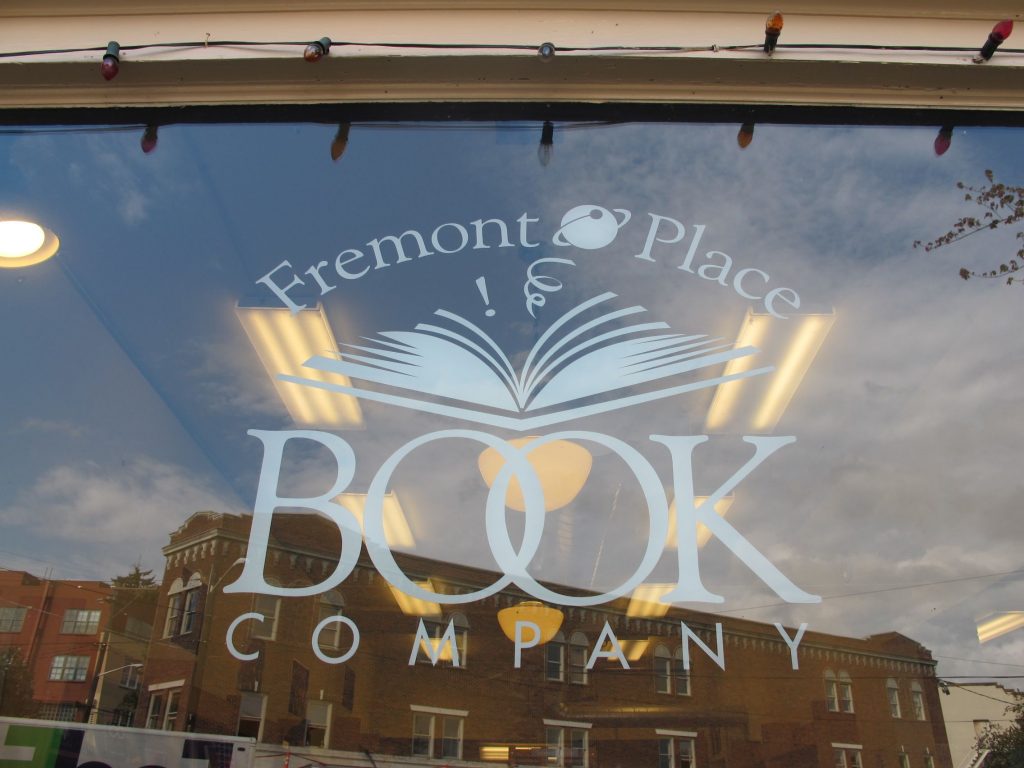 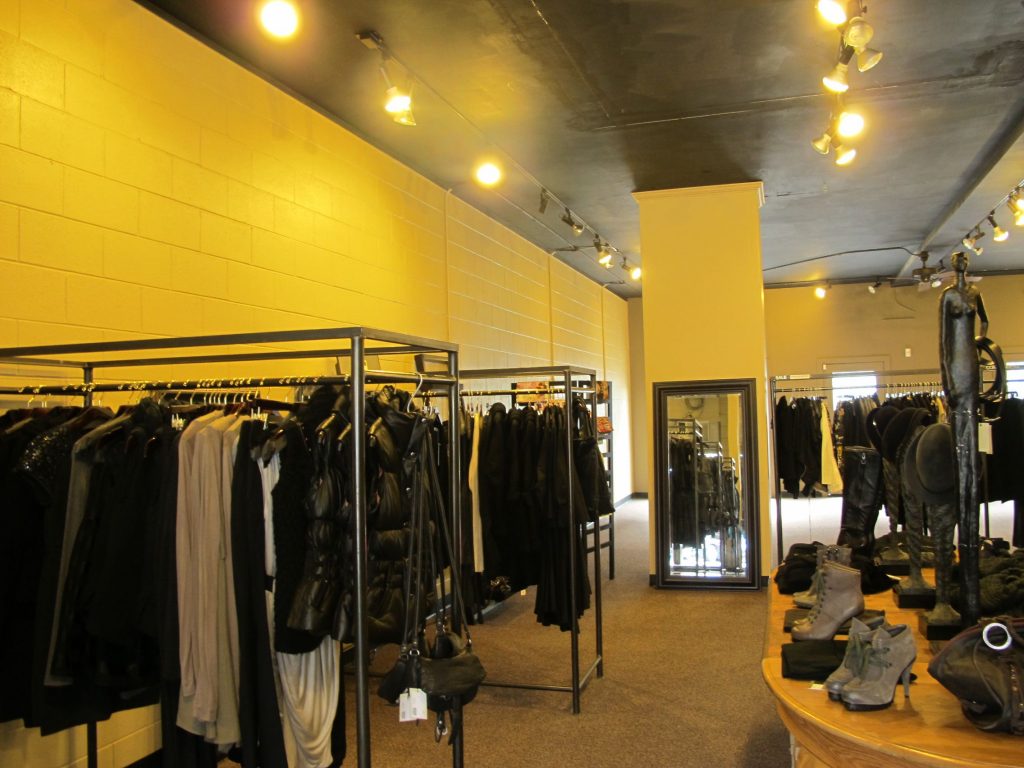 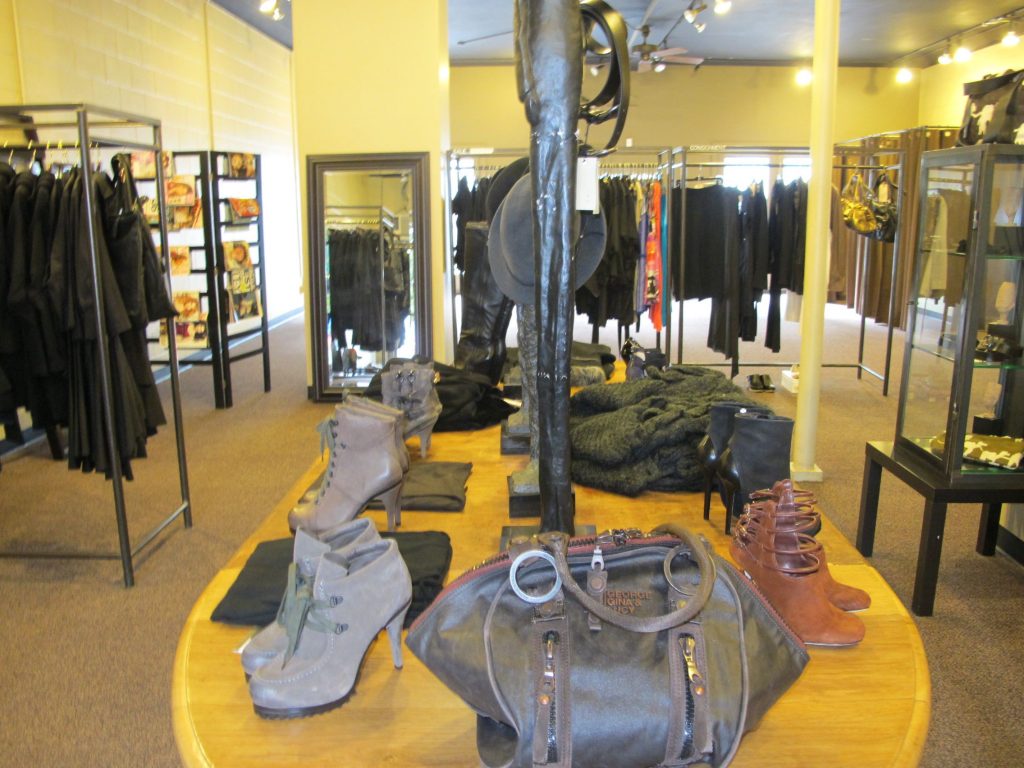 Then we were done and we made our way next door to a little store called Merge. No books but wonderfully edited clothes all in shades of black and gray. The store is owned by former New Yorker Patricia Wolfkill. 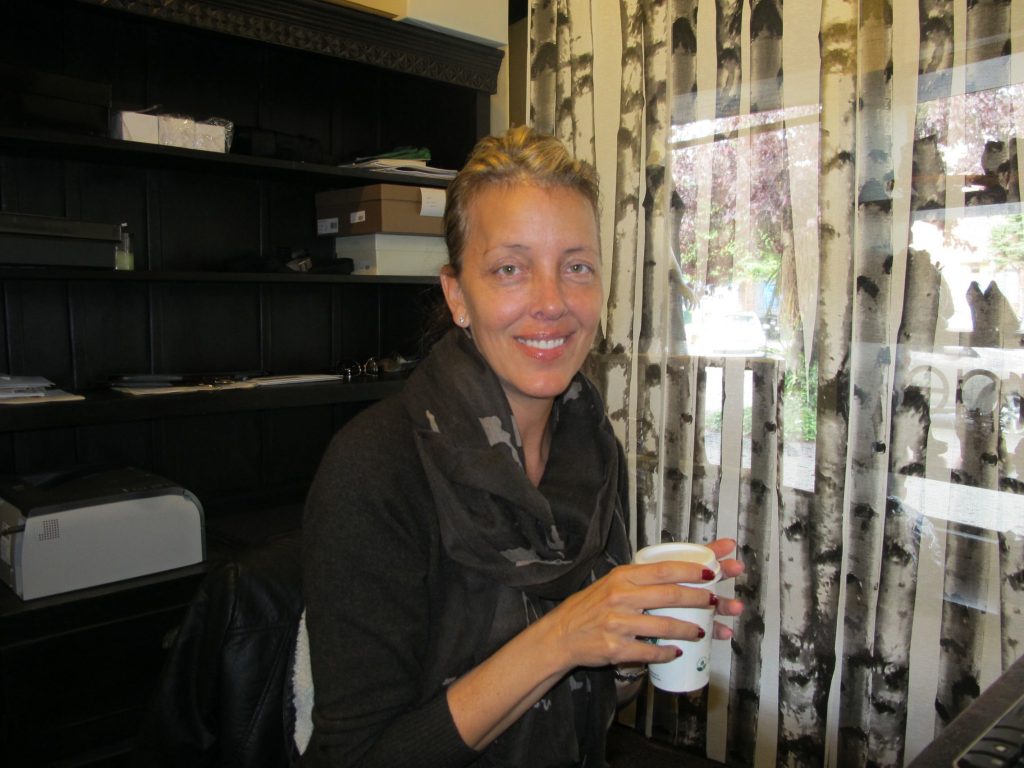 Cindy and I spent a good hour hanging out there with her. OK so I bought a cute gray sweater. I have bought a lot of books! Patricia has great energy and wonderful taste. If I lived here I think she and  I would be friends and I know I would spend a lot of time in Merge. 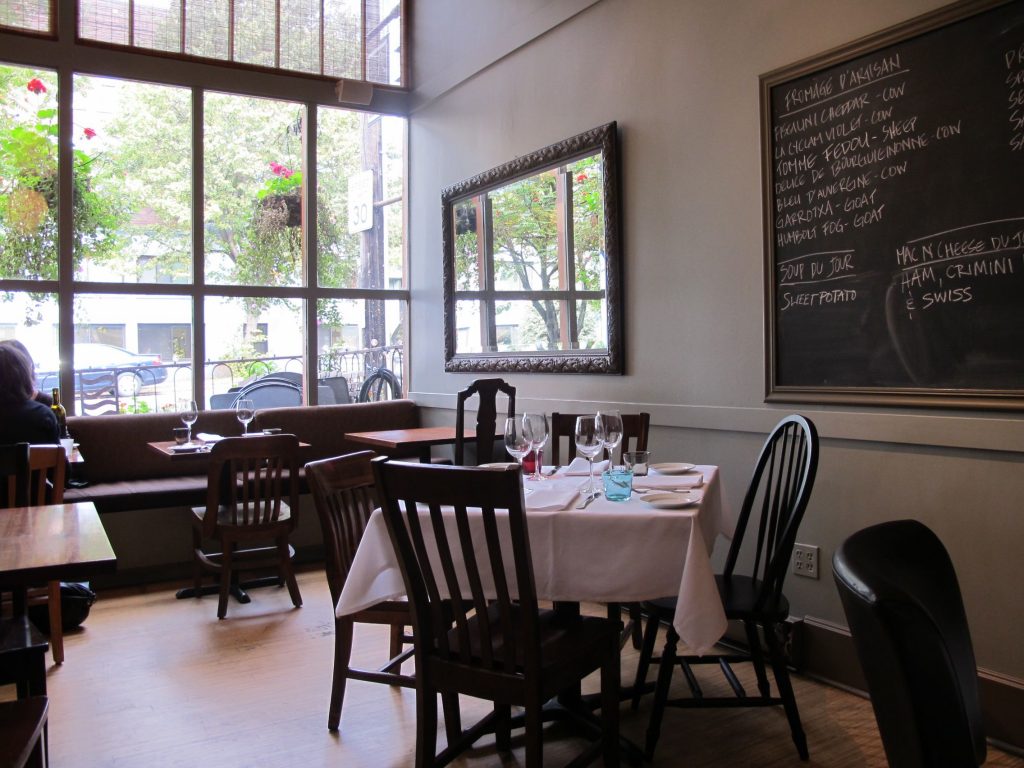 We ended up having lunch at a little bistro she recommended down the block.

It was a great day. After Cindy and Chris dropped me off I was going to go wander but frankly I was too tired.  I think my body knows it’s over and it can now relax so I came back to the room to blog so I would not be up another night until one.

The evening was spent with Heather Hughes another tribe member who came to me through Blake’s world. We had a wonderful time getting to know each other and it was a lovely way to end my Face to Facebook adventure. I have to say Heather is one of those people after we were together for five minutes  it felt like we had been friends for twenty years. 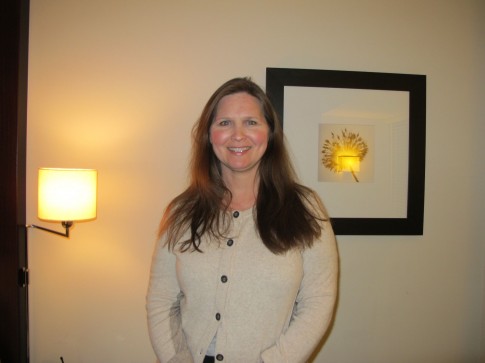 Tomorrow I meet up face to face with my husband and we are spending the weekend in Chicago, a city I will be visiting for the first time.

Thank you everyone for making this a truly memorable sixteen days. I will do a wrap up next week:  But for now I am over and out. 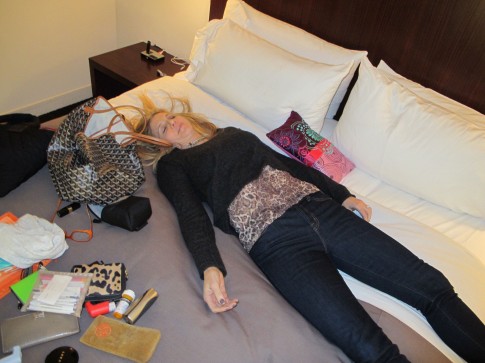