As Face to Facebook ends ~ a few days in Chicago ~ then home.

Look who I found here. 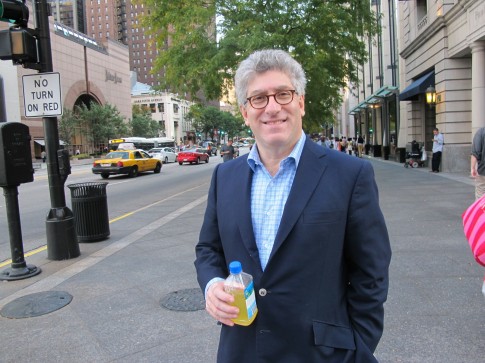 Just walking down the street with a bottle of Figi Water with Emergence in it. Well, not exactly like that. Hard as it is to believe I have never been to Chicago.  I find it startling if you consider I’ve been to India about fifteen times. I have ALWAYS wanted to go to Chicago. So I made Glenn promise to meet me there at the end of the Face to Facebook trip. I have no friends from my past there, or none I know of so it seemed perfect. 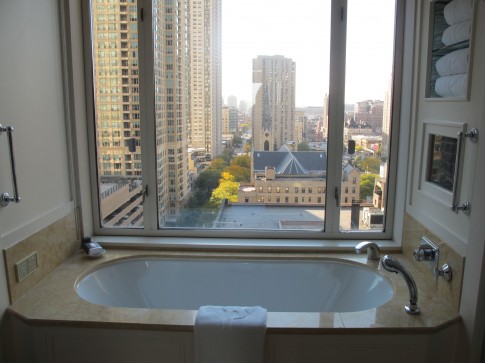 This was our bathroom ~ now I do stay in nicer rooms when traveling with Glenn and when I saw this I was so tired I could have pretty much spent the weekend in there. But I was there to see the city, tired or not I was going to see everything I could in two days. 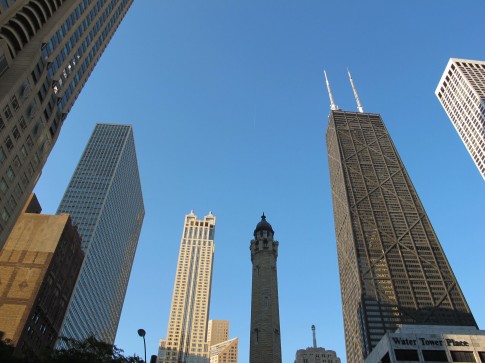 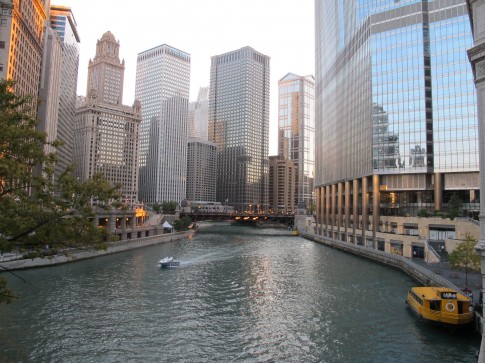 We walked around downtown for a good part of Friday afternoon. Well, to be fair I didn’t arrive until three.

Everyone always says “It’s the better New York, the cleaner New York.”  I must say I found it to be nothing like New York. I did find it to be cleaner.  I don’t know how one would calibrate better. But it’s one of those phrases people like to throw around.  I am so sick of hearing   is “The Paris of _____”  I cannot tell you. Every other city is the ” The Paris of the East”  The Paris of the prairie.”  The Paris of the Gulapagos” It’s endless. Paris is Paris. New York is New York and well, Chicago is Chicago. I did find it clean. I thought the architecture was stunning. I found the people friendly, but it is the  mid west, which means it’s not New York.  But that being said I was trilled to see it.

We went to dinner at a place four people said was the ONLY place to eat a steakhouse called Gibsons. They said everyone who was anyone in Chicago ate there. Now I must say the night we went there it looked like everyone who was in town for the weekend from somewhere else was there, plus a few locals. It was packed. But it was what I expected a Chicago steak house to be, loud, lots of martinis being downed and ginormous portions. 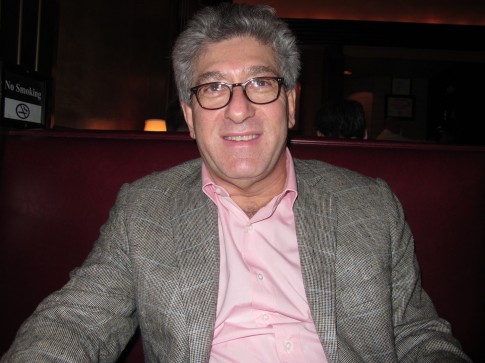 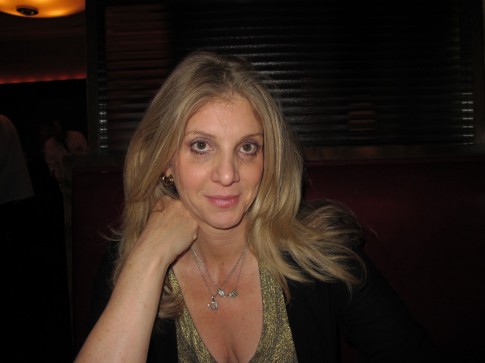 Now I am showing you these photos for a reason.  We got dressed nicely, as we do when we go out to dinner at place we are told is nice. Something I really  hate is when I do go out somewhere nice and people wander in in shorts and flip flops.  I hate it at restaurants, the theatre, any event where one should at least make the effort to pull one’s self together. You see how nice Glenn looks in his pink shirt, it’s not purple, but pink is almost as good.  Anyway, despite the short sporters we had a good time  and real Chicago meal – I think. 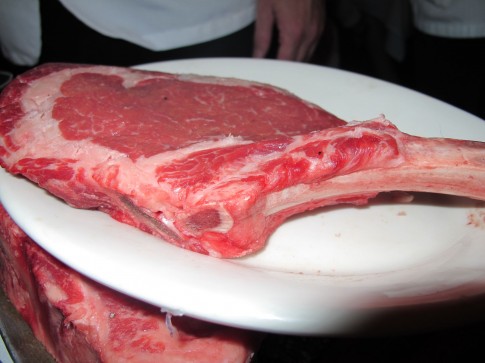 I am aware that any vegetarian readers I have just logged off. This is known as a “Chicago cut.”

We asked our waiter Rich what that meant. 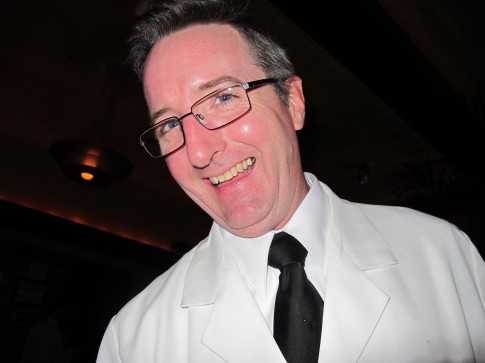 This is Rich ~ he said that New York has the strip cut, Kansas has whatever cut Kansas has. I personally have never seen one, but I take him at his word and that Chicago wanted a cut of their own. So they came up with this. Works for me.  It weighs in at 18 ounces. Which seems huge, but everyone around us was chowing down on 24 to 48 ounces. There was even a 62 ounce steak there. I swear to God Rich said he has witnessed at least three heart attacks since he has been working there. 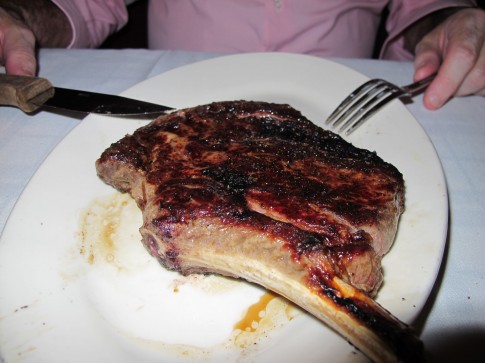 We split it. We did eat it all. It was really good. We will now not eat meat for at least three weeks. 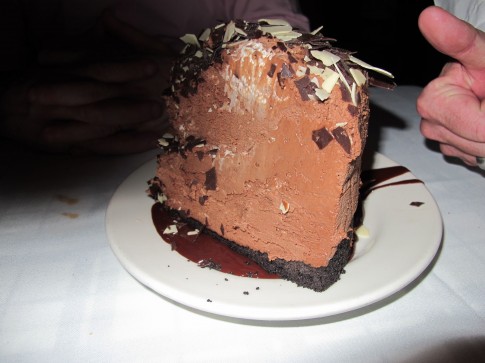 This is a single serving of the chocolate mousse cake. We did not order it. Rich knew I was fascinated by the portions so he brought by someone else’s for me to photograph. I just showed this to Lucy who went out of her mind.
We ate our Chicago cut and salad and went home. I was so happy I could go to sleep and didn’t have to blog and then catch a flight.

Though the next day first stop was Lincoln Square, which used to be German Town and is now a bit of German Town but a lot of young families and gentrification, including an independent book store called The Book Cellar. 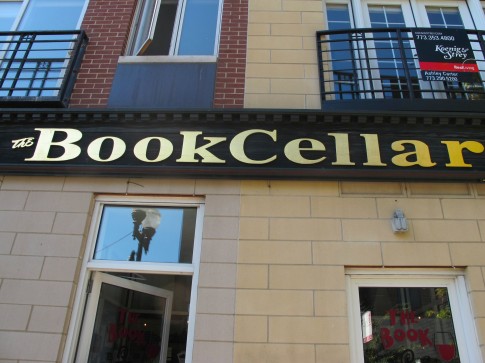 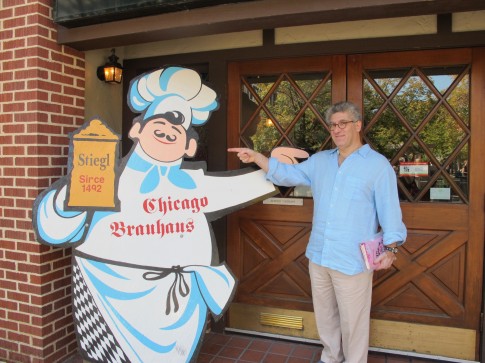 And while the stroller traffic could rival Park Slope, there are still remnants of German Town. 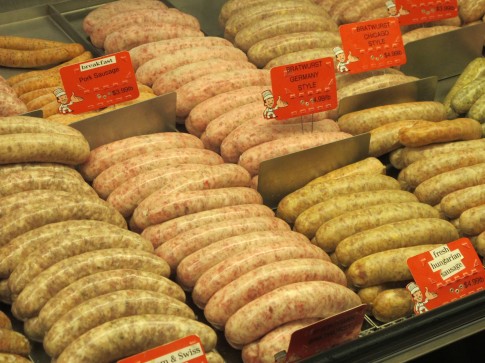 Perhaps my meatiest blog to date. But I always imagined Chicago had a lot of sausage. 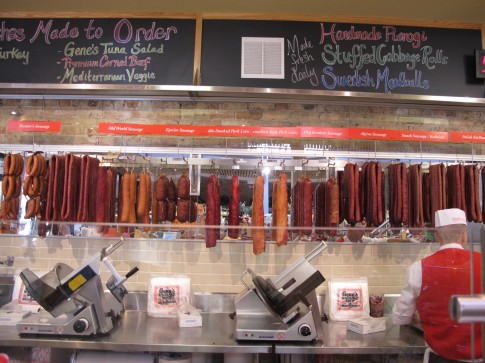 This is exactly what I was expecting. I was happy to have my expectations met. 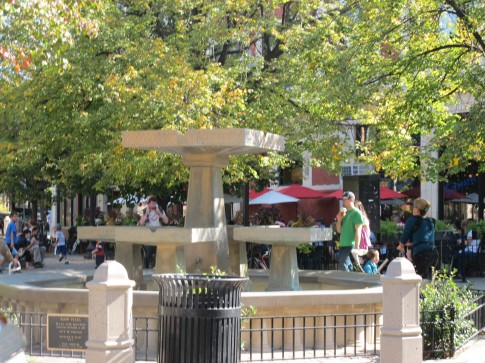 Lincoln Square ~ very pretty and very residential; in fact I met someone that afternoon who lived there and they were surprised I had been. They said no tourists go there. That has been one of the many great things about this trip, because I have visited so many neighborhood bookstores, I have seen parts of towns I would have never seen otherwise. 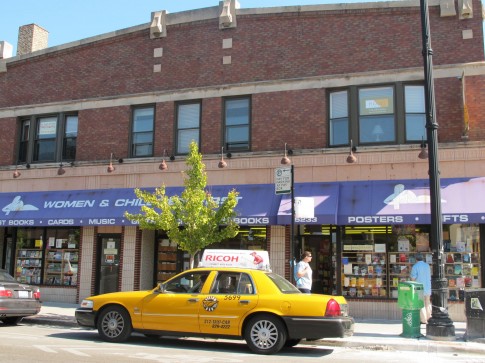 This is Women and Children first bookstore. My last bookstore on this trip. It was in a part of Chicago that used to be called Sweedish Town. It is very young and I saw little if nothing of it’s former Swedish existence. 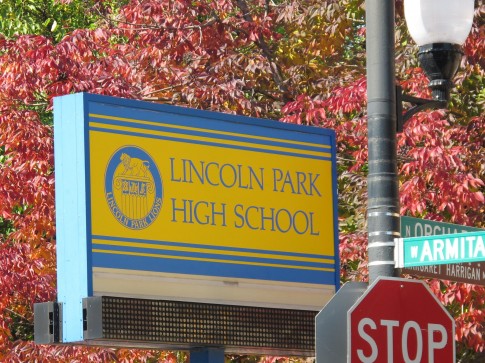 We visited another neighborhood Lincoln Park. Glenn and I were both convinced that John Hughes used this in some of his films. Can anyone out there second that?

Our trip was originally planned for three days and we should have come back around this time today. But I have been gone so long and I was missing two people very much. One of whom came home from college for the long weekend. So we took a plane out early Sunday morning to get home to them. 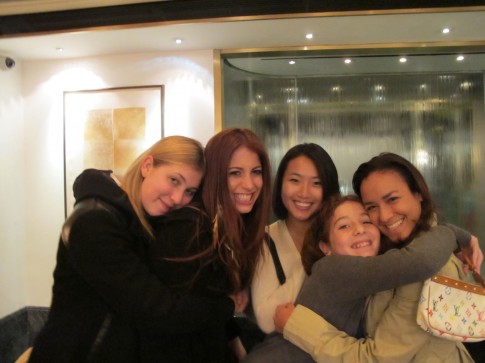 Well, only two are mine. The one who actually looks like Lucy is Taylor’s friend Ziggy who stayed with us over the weekend. And the one on the end, Linnea Keys, I call my third daughter as she has spent so much time with us over the last four years it feels like she is. I was thrilled to see them all.

While Face to Facebook was a truly amazing experience and one I will never forget, sometimes you need to be face to face with the faces you love the most!