I don’t know if it’s because summer is ending, or everyone is really hot or perhaps (at least where we are) entitilitus has reached epidemic proportions, but the last couple weeks everywhere I go most people are behaving like total assholes.

I don’t know if it’s because summer is ending, or everyone is really hot or perhaps (at least where we are) entitilitus has reached epidemic proportions, but the last couple weeks everywhere I go most people are behaving like total assholes.

People are abusing those who work in shops, restaurants and human kind in general. They are driving like lunatics: oh, and forget waiting for their turn in line.

Last night I was picking up some burgers and the lady ahead of me went ballistic on the poor guy working behind the counter because her sundae didn’t have enough whip cream and she felt it took him too long to make it. She insulted him terribly, calling him a moron and then asked for her money back. He kept his cool, and dumped the ice cream in the trash. What I’m sure he wanted to do was dump it on her head.

I wanted to chew her out right there,  “You idiotic, self-important bitch you realize this guy is probably holding down two jobs. He makes an hour what your stupid sundae costs, and if you want some more whip cream you can ask nicely. You can be fucking polite to people even if you misguidedly think you are superior.”

But I didn’t. I bit my tongue, smiled at him, waited my turn and gave him a nice tip.

I wasn’t sure if I was overreacting or if I was justified in my feelings. So I spent part of today chatting with friends who work in stores and restaurants, have stores and generally just know what’s up and they said I was spot on. It is clearly the summer of the obnoxious, entitled jerk gone wild.

One friend who works in a restaurant said she has been experiencing an unprecedented level of unbridled rudeness. One woman showed up an hour and a half late for her reservation and then had the nerve to call my friend an “idiotic bitch” because she hadn’t held her table. I mean who are these people?  This broad shows up an hour late and her table is supposed to be there. What planet did her ship come in from???

My friend is the most adorable girl you have ever met.  She works two jobs and always has a smile on her face even when faced with this kind of behavior. If I had been there I would have laced into that woman out too ~ well at least in my mind or in the car on the way home.

And then excuse me ~ there is a line here. What has happened to people waiting their turn? I was buying the girls ice cream night before last and I was paying when the guy behind me bellowed “I want a water.” The young girl behind the counter was a bit startled by the tone and so she handed him one.  He then thrust a twenty in front of my face as I was trying to pay for ours. “Excuse me, do you mind waiting your turn.” Maybe he was absent on we wait in line day in school, except he has had decades to figure it out.

I think people just don’t give a damn. Only their immediate needs count and they can’t be bothered to be courteous, patient or polite.

Another friend who has business said it’s been an endless parade of snooty, ill-mannered shoppers who not only insult the merchandise but the people trying to help them.

This is just not OK ~ I’m sure none of you reading this behave this way, so I’m not ranting at you. I’m ranting into the cyber waves.

And actually it’s amazing I’m here to do it as I can’t tell you how many times I have almost been plowed down by crazy people in Escalades who feel they own the road, and slowing down for a pedestrian is so not on their “to do list.”

This is what I want to know, do they only sell Escalades to people who are already assholes, or is it once behind the wheel  you instantaneously transform into one?

Perhaps the Hurricane Earl will wash away some of this bad behavior or maybe the fall leaves will change people’s moods. Glenn feels it’s to much reality TV and that everyone has turned into the cast of Jersey Shore and the Real Housewives. Not sure how he came up with this theory as he doesn’t watch the shows.

I don’t actually know what is causing it. But I do know it’s takes just as much time to be kind to someone as it does rude.  And at the end of the day most people are doing the best they can. So if your sundae is not everything you want it to be, put yourself into the shoes of the person making it, do you think their life is everything they want it to be?  Once you ask yourself that I think it’s much easier to smile and say thank you. 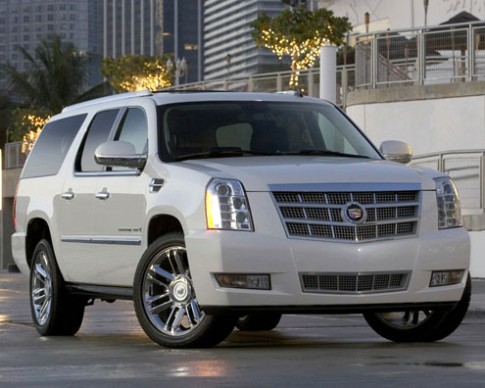