Today I flew to Atlanta to meet up with Sandra Schmandt, someone I have not seen since I was fourteen. 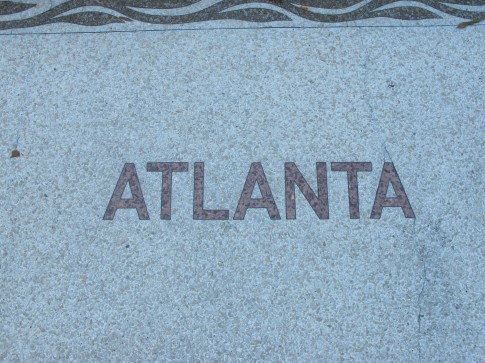 Here I am in Atlanta, a place I have never been.  I flew down this morning with a plane full of soldiers on their way to Afghanistan. It’s a whole other blog, but it was very upsetting, heartwarming, thought provoking and worthy of it’s own seven hundred words. I’m just too tired to do it justice and I am here for another reason. I am visiting several people from my past.  The first and I suppose main one is Sandra Schmandt. Now we go way back… 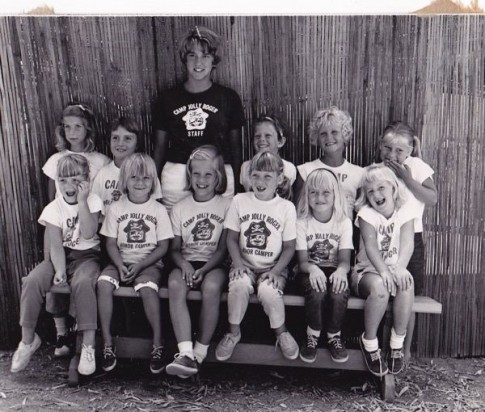 This far. She is the third one in from the left. I don’t think it will be hard to figure out which one is me. In many ways I haven’t changed at all and neither has she. She was always just sweet. I think anyone who knew her would say that. We were going over her old report cards tonight and all her reports said ” conscientious.”  She felt that everyone’s must have said that. I told her mine all said, a big distraction to the rest of the class, needs to learn to concentrate. Would do very well if she could focus but seems too amused by what is going on in her own head and not in the classroom. So  conscientious was true about Sandra but not all of us.

In this shot we were in camp together. I think we were around 7.  We both ended up at the same school, she left in the 9th grade and I stayed on. We realized we probably had not seen each other since then, maybe once. I will let you do the math.

The thing about Sandra is we were friends, but not best friends, she remembers coming over for the night. I remember going over to her house. We were friends, but no question I spent more time with Vanessa and others and her best friend was a girl called Linda Ellenshaw who I’m having lunch with next week. And Sandra left before high school when as they say in TV more high jinx occur.

She had a photo of a birthday party for one our friends and I was not there, I said   “See I wasn’t popular.”   Like Vanessa she does not remember this either. She said I wasn’t at the party because I didn’t ride horses.   What does come through is we all  seem to remember being miserable as kids.

Which I guess we should not have been as we were all blonde – as someone pointed out and entitled. Though nothing is ever what it looks like. And I’m now not sure how miserable we were, we all look happy, but when asked we all say  “I was unhappy and nobody liked me.”

But from the beginning of this journey  Sandra has been one of the most responsive,  helpful and participatory.   She has been just amazing. Especially since she is one person I really had lost total touch with.

She works for Marriott. She got me great rates in Hilton Head and here…Oh almost forgot my room.  Cause I know you are all dying to see. 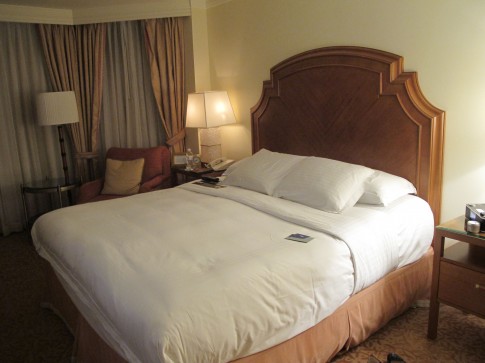 Anyway, tomorrow she is taking the day off work. She is driving me to bookstores, to see my old boyfriend, to the hospital to see the other Tracey Jackson.  And if that weren’t nice enough- I emailed her this morning and said we had to find a camera store tomorrow as I had come off without the charger to my camera and when I arrived she had gone and got it for me already. Beyond conscientious.

So here we were,not having seen each other for close to forty years, and in that odd way it was like no time had passed. There is something about time being a sort of…I don’t want to say equalizer, but you get to this place and no matter what you’ve done, or where you’ve lived, or the choices you’ve made,  the mere fact that you have reached this half century mark  and had children, and relationships and just waded through the river of life, and I suppose the fact that you started out together, it  gives you endless things to talk about and much in common. It also gives your life a continuity and narrative structure. Here are people who knew you before you are the person you became and you just sort of pick it up, but with all the old frames of reference that the newer people in your life don’t share. It’s very comforting and quite wonderful.

Sandra is not only sweet and conscientious, but she is a really good sport. I found out a week ago they opened an Exhale here in Atlanta. So I said we have to go workout. She brought her gear, plugged the address in her GPS and off we went and took a four- thirty core fusion class. She just went with me. I don’t know many people who would do that. And  let’s face it, I can be bossy. I  don’t really ask, I just sort of say we’re going or I’m going do you want to come. But she did it and liked it.  I must say the place is very swank, much nicer than the New York ones. 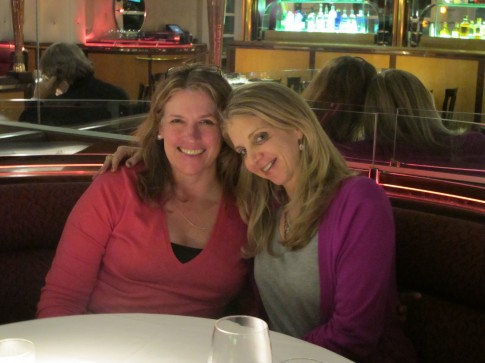 We haven’t changed that much since Camp Jolly Roger.

People grow up and truly surprise you.  Of all of us Sandra one might have thought was the more conventional. In a group of  often times screwy families and odd home lives, she always seemed to have a very normal almost fifties one. Her mom was always home, her parents stayed together, she had a sister. She was conscientious and kind. And while she still is, she turned out to be much more gutsy than I might have expected.  She had a child on her on at thirty;  not an easy thing to do.  And on her own she has raised her daughter, supported her, put her through private school, bought herself a five bedroom house, stashed away for her old age, really been conscientious, yet on her terms and I think very brave. .

I had not seen her since really she was a child and I found a very strong, competent woman, who still happens to be very sweet.  It was a lovely surprise.

Tomorrow I go to see one of the big romances of my early life and the other Tracey Jackson!