I have spent the last few days trying to remember what it was like to live a life without chargers. The care and feeding of chargers takes up way too much space in my days. 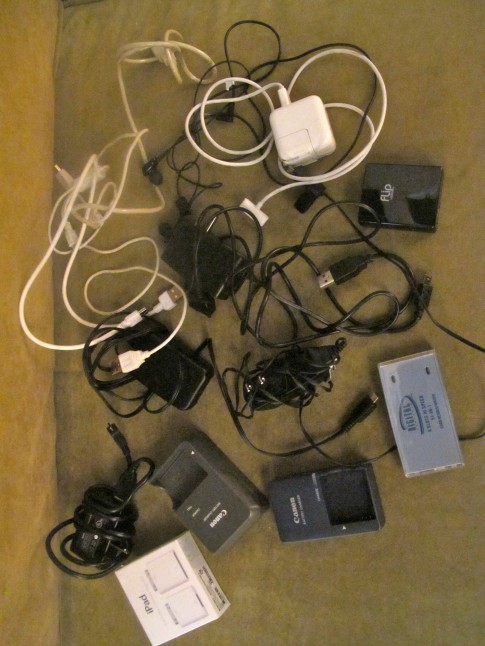 I have spent the last few days trying to remember what it was like to live a life without chargers.  The care and feeding of chargers takes up way too much space in my days.

If I’m not looking for one, I’m identifying one or I’m looking for someone’s who can’t remember where they put it. I’m retrieving or attempting to locate one of mine that has been “borrowed.”  I’m plugging, unplugging, alternating, schlepping, lamenting that I forgot to charge something the night before or trying to figure out who unplugged one of mine in order to stick in one of theirs.  And if this weren’t enough on my over-charged brain, I’m trying to come up with the perfect storage solution for a family  over-populated by chargers.

In our little foursome we have 47 chargers of various sorts.  Forty-seven, you say – seems like a lot. It is.

But in terms of all other chargers she holds her own with the rest of us. We each have a laptop, Glenn and I have two. The two girls and I each have iPods and an iPad.

In terms of cameras, Taylor wins out as she is a photographer, at last count she had four. Lucy and I each have two. Glenn has one, he does not even know its whereabouts, much less that of its chargers. But we have uploaders and chargers for all of them. I even have a few generic ones in case we lose one, as I did last year in Cambodia and was forced to take photos with my BlackBerry for the rest of the trip.

I have a Flipcam and one of those Sprint wireless devices that can get Wi-Fi anywhere for up to five people.

My toothbrush is on a charger as when I’m not using it, it’s charging and disinfecting itself at the same time.  And then, as if there were not enough I had to go follow the advice of my friends Jane Wagman and her sister Liz Lange on their Shopafrolic site and buy a facial brush. Because let’s face it, I couldn’t live another day without being able to brush my face. You should see the charger that comes with that.

Glenn and Taylor get the award for being the most chargerly challenged in our household.

Glenn because he really never knows where they are and he has the nasty habit of not unplugging them when he is finished; thus causing me to yank it out of the socket,  and yell,  “This not good for the environment!”   He also has the tendency, as does Taylor, to just go and unplug anything that might be charging and plug in his own device.

Taylor has two charging issues: number one, she has no boundaries when it comes to chargers.  Her motto is any charger is mia charger.  This causes many moments of discord mostly between she and her sister, who I might note is the most responsible of the group. She keeps her chargers to herself; they are always in a special place or in use.

While Glenn may not know where his are because I have unplugged them and put them in their rightful house; Taylor, despite how many chargers she may have seldom finds herself in the same city as any of them. Since she is lucky enough to call three places home, our apt in New York, our house on Long Island, and her dorm in Boston, she inevitably ends up in one of these places and whatever charger she needs is in one of the others. This either sends her to Lucy’s safe haven of chargers, or sometimes mine where she, like Glenn, willy-nilly unplugs what she needs and runs off with it.

If she happens to take one of Lucy’s without asking a new battle erupts in the ongoing charger wars.

What would make life easier and I imagine more environmentally friendly is one charger that worked for all. This would avoid two things – one, having to replace endlessly lost ones with new ones and  families of more than one trying to figure out whose is whose.  And then that other moment of charger hell, when you open the drawer crammed with all the chargers from yester-device and wonder which ones might still be in play.  I have gone through those drawers with a vengeance chucking anything I didn’t think we still used only to find out it was someone’s lifeline to their cell phone, camera, or oh no, I forgot, the portable back-up drive. We can add those to the list, but those just come with the UCB cables. We must have two hundred of those lying about.

Then of course we have the other charger nightmare: a family of four, traveling abroad with two converters, twelve devices that need booting up- may the best man win. I have set my alarm for three am to wake up in some third world country,  to tiptoe around a strange room, stubbing my toe in punishment for unplugging Glenn’s humming BlackBerry so mine could get some nutrients.

For me the real issue as this collection of life support has swelled to such a momentous size is where to keep them and how to transport them?

For a long time I threw them all in a mesh bag, but this resulted in them getting tangled and me having to dump them on the floor swearing, searching and untangling to find the one I wanted several times a day.

Then for a while I kept all the phone/BlackBerry chargers in a Lucite box until I decided I liked it better for vitamins. This really threw Glenn off his game when he went looking for his phone charger and all he found was chewable vitamin D. The good news about that is they think vitamin D may prevent cancer and they are yet to prove that all these devices don’t.

Check out Jane and Liz’s site!