A year ago today my best friend of 48 years Blake Snyder died of a pulmonary embolism. This is the first year of my life where I have to remember a year without Blake.

Don’t try calling it. It’s not the unpublished number of the new “it” club or restaurant.  Nor is it something I was sent on the QT that came from Eliot Spitzer’s cell phone. It was the phone number of my best and oldest friend Blake Snyder who died a year ago today at the age of 52.

For the first time in six months I just dialed it and I was relieved to hear that it was only “not in service anymore.” It has not been given to someone else. While he may not be here to answer, at least it remains his number.  I was fearful a strange voice would respond “Hello” and I would be obligated to say “Sorry, wrong number.”  I didn’t want it to be the wrong number. I wanted it to be Blake’s number.

I also did not want to have talk to the person on the other end. What would I say?  “I just wanted to find out if this still belonged my friend Blake.” That would sound odd,  then I would have to tell a stranger how many times this year I have without thinking reached for my phone to punch in those numbers,  and then had to stop myself when I remembered Blake was no longer alive.

In the beginning, the first days and weeks following his death I called it a lot; at first to hear his voice on the voice mail and then after a while to see if it had been disconnected.  Then about six months ago I stopped calling, until five minutes ago. Death does have a way of burying itself into a corner of your life and it makes it very clear it’s not moving on. This is the way it is from now on and in time you accept it.  You cry a little less, you are not surprised as often; your life becomes your life with this person now dead. You cease to call their phone number or continue to reread their emails. You stop torturing yourself or perhaps you just accept it on its terms.

Right after he died, in fact the next day through the tears and not bothering to change or wash my face I sat down in the exact spot I am now and wrote about him and for days and days I just wrote. I wrote Save The Cat’s Final Meow. And a three part series (I will republish this week on when we worked on the Howard Stern movie together) I just wrote and wrote, as I knew it was the only way I could get through the anguish of losing the person aside from my parents who had known me the longest and the only person who has known me that long I am/was still close to.

I had never known a life without Blake. I have now known a year of one.

I think the phone thing is really the hardest, it’s the most immediate and face slapping reminder that the person is no longer there. We would call each other a lot. We worked together on projects, and in fact we went up for something at DreamWorks animation three weeks before he died. He would call me about new girlfriends. I would call him for advice on what I was working on. We had a verbal shorthand that only close friends or lovers have.  We didn’t always speak in full sentences; we often didn’t even close with good-bye. I have reached for that phone so many times this year. In the early months I would actually pick it up and then put it down. Time moved on, and I would think about calling, stare at the phone and sometimes break into the tears.  At a certain point I would have the impulse to hear his voice, seek his consul or share something and I would then just stare into space and try and conjure what he would say if he were actually still there. But  eventually I ignored the phone all together. Though there have been literally hundreds of things in the last year I wanted, needed, and was longing to tell him about. Little things, big things, and things that would  only mean something to us. Things that had their special place in friendships, the really private, you had to be there things that separate one friendship from another. We had forty-eight years of those. I will never ever have that with anyone else again. I will not live that long. There is no way I can collect the mileage points I had with Blake.

I used to be beyond thrilled when I caught sight of one in my mail. Now I have this sudden burst of sadness as I always called or emailed Blake when one arrived and told him how much it was for. Now I sort of stare into space after I open them. One tends to stare into space a lot after the loss of someone that close. I have learned that in the last year. That stare into nowhere, looking for where they would be, trying to conjure their voice, their image, and I guess asking why aren’t you here? And one step further where are you?

I have tried so hard to remember the last thing he actually did say to me.

I think we were talking about Dreamworks who screwed us over and we both said “Fuck ’em” at the same time, then hung up. Could those have been our last words to each other? “Fuck ’em.” I kind of hope they were. It encompasses so much of the way we felt about so many things. I guess in it’s own way it’s the perfect last words for two lifetime friends who turned into comedy writers. FUCK ‘EM.

But then I have his last email to me, his last real correspondence.  I had written a very bold piece on the film industry for The Huffington  Post called The Real Ugly Truth and he sent me an email that said “Yeah Tracers” That was the last thing he said to me – I know that. “Yeah Tracers.”  It’s perfect as it is something only he could say. He was the only person who ever called me that. His last communication to me was something that only Blake could have said and only to me.

You know I really wanted this to be good. I have been thinking about for weeks. What would I say today?  How would I memorialize the anniversary of his death? And all I can do is sit here and cry and I can’t write.  The thing about a death like Blake’s is you learn to sort of keep it bay. You know it’s a hot stove and not to touch it. But when you go and start digging for those feelings they are still too raw and deep and painful and I can’t be funny or wise or glib or any of the things he would want me to be, or I expect me to be or I want to be for all of you reading.

One year ago today my oldest, best friend died suddenly and unexpectedly. I thought I had gotten used to it. I thought wrong. 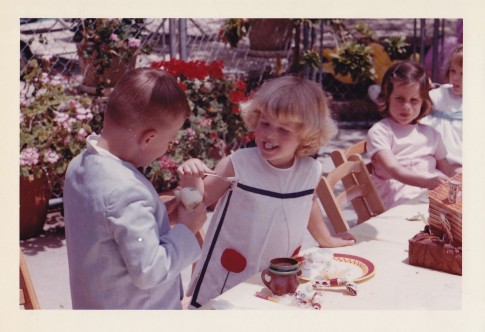 Blake and me at my third birthday.