I’m in a really good mood today and it is not entirely because of my Amma hug though the Amma love does keep on flowing. I’m in a good mood because I did several things this week that we should all do, they add to our longevity or frame of mind and general well being. You would be surprised at how many people don’t do them. This is important please click and read more.

IM IN A GOOD MOOD AND YOU CAN BE TOO!

I’m in a really good mood today and it is not entirely because of my Amma hug though the Amma love does keep on flowing. I’m in a good mood because I did several things this week that we should all do, they add to our longevity, frame of mind and general well being.  You would be surprised at how many people don’t do them.

Every now and then I do Bossy Tracey Day, but it is all in the name of being helpful and OK it does tie in with my book. But it really has to do with health and well being especially after the age of gulp, 50, though many of these things should be done by people starting in their twenties.

But I want you to stay with me a moment here, boys will be able to leave the room first, so I will get the every person stuff out of the way.  Simple yes or no response to yourself is all that is required.

If you are a person over 25 have you had your moles checked, a complete visual body scan by a proper dermatologist in the last year?  IN THE LAST YEAR?

Yes or No?   Eighteen months doesn’t count. My cousin’s brother-in law is a dermatologist and he looked at the gnarly brown spot under my knee  on Thanksgiving doesn’t count. Have you been to a proper dermatologist  and had your skin checked is all that counts.  If the answer is yes, and you are a man – I send you a big Tracey hug and you can now log off. If you responded no, then I suggest you pick up the phone and make an appointment.

I am always amazed by how many smart ~ health savvy and even hypochondriacal people answer no to this question. I had lunch with a girlfriend today she is  super smart, totally on the ball, never had it done. She is in her mid-forties.  Not good!

More than 1 million cases of skin cancer are diagnosed in the United States every year.1

Basal cell and squamous cell carcinomas are the two most common forms of skin cancer, but are easily treated if detected early.1

Current estimates are that 1 in 5 Americans will develop skin cancer in their lifetime.2

The incidence of melanoma has been steadily increasing for the past 30 years.

Since 1992, melanoma has increased 3.1 percent annually in non-Hispanic Caucasians, but in recent years it is increasing more rapidly in young white women

1 in 58 men and women will be diagnosed with melanoma during their lifetime. Caucasians and men older than 50 years of age are at a higher risk of developing melanoma than the general population.5

The World Health Organization estimates that as many as 65,161 people a year worldwide die from too much sun, mostly from malignant skin cancer.6

People with more than 50 moles, atypical moles, or a family history of melanoma are at an increased risk of developing melanoma.1

About 75 percent of skin cancer deaths are from melanoma.1

The five-year survival rate for people whose melanoma is detected and treated before it spreads to the lymph nodes is 99 percent.1

The part of this that gets to me is the one person dies of it every hour.  Ponder that and then think about why you should maybe pick up the phone and make that appointment and take one hour out of every year to make sure you don’t get this and if you do by chance ever find something you catch it in time.

I went in yesterday to my dermatologist Dr. Ellen Gendler. I go every year in June or July. Now I’m not saying this cause I’m so great I get my moles checked, lalala I’m a role model – I’m saying it because it is the smart thing to do.  And I’m as busy as anyone else and I make the time, so I’m too busy does not count.

Sun does damage, the ozone layers or lack there of do damage, the environment does damage and most people reading this are Boomers which means we baked and didn’t use sunscreen.

So don’t do me a favor ~ do yourself a favor. If it isn’t already; make this a part of your yearly health routine. Pick a month; stick with it, it’s like exercise it is the routine that makes it part of your life.

And I know I sound like the total pain the ass mother you wish would shut up but wear sunscreen. And not just at the beach, on your face everyday and on your body even if you are just walking around the city or driving around town.

The best one in all studies is  Anthelios.  Look at these two boxes. They look the same but they are not ~ one is made in France and has MEXORYL and blocks the UV rays the other is made in the states and does not. Buy the one with MEXORYL it is proven time and time again to be the one thing that works. Ellen told me this. She asked me to tell all of you, she said if she had a blog she would do it herself.  Buy the one made in France made with Mexoryl, not the one that says  Cell-Ox Shield that is made in the US. 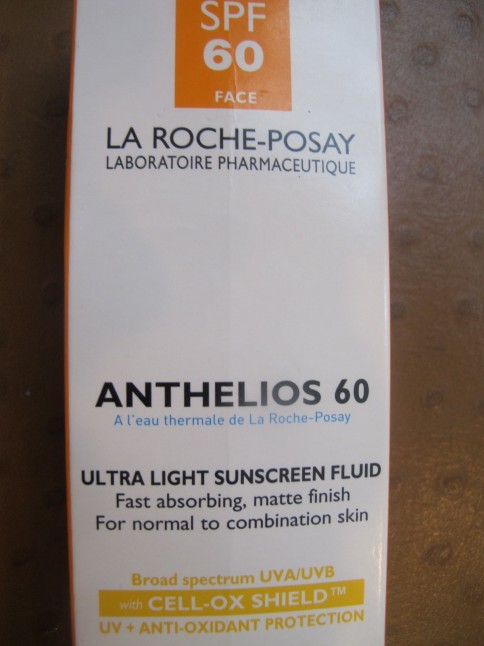 Now if you don’t want to spend fifty bucks on sunscreen which I understand, though the cost of a skin cancer removal, biopsy and follow up visit will amount to ten times that much, if not more more; if you want to go cheaper Ellen says Neutrogena. Keep one in your car, put it on your hands while you are driving. I learned this from my mother who was way ahead of the game in the sunscreen department.   She used to drive around with tubes all over the car; I thought she was out of her mind, now I do it too.

Boys you can now leave.  If you are in the mood to read more Glenn says that Bill Chuck has THE best baseball blog on the web. He is a funny smart guy I know that. You can find him at –

But call and make that appointment first. Bill will be your reward.

If you don’t have a good dermatologist and you live in NYC I can recommend two.

If you are male and prefer a guy cause I think they look under your balls or something. I don’t know not having them or none that you can see I recommend

I carried on so long about skin cancer I didn’t get to mammogram day. That was today, whew that is out of the way for a year.  That put me in a really good mood. Nothing short  of Amma puts  you in the kind of mood that a clean mammogram does. But I will save that for  Bossy Tracey Day – next week.  That day all the boys can go on to Bill Chuck.

In the meantime wear your sunscreen and call make that appointment. You’ll be glad you did.