Less than an hour ago Glenn and I were in the arms of Amma who is known throughout the world as the hugging Saint. OK – I know many of you probably just stopped reading and are moving on to The Times online, but for those of you who are believers, those of you who teeter on the edge of belief or for the plain curious I will try and explain what it was like being hugged by the hugging Saint.

BLESSED BY AMMA THE HUGGING SAINT

Less than an hour ago Glenn and I were in the arms of Amma who is known throughout the world as the hugging Saint. OK – I know many of you probably just stopped reading and are moving on to The Times online, but for those of you who are believers, those of you who teeter on the edge of belief or for the plain curious I will try and explain what it was like being hugged by the hugging Saint.

For those of you have not heard of Amma which means mother she an Indian spiritual leader who has dedicated her life to simply loving and giving back. Her decades of selfless work have  resulted in a global following with endless charities she supports and  ashrams on literally every continent, seventy-one in all. She has twenty-two in India alone and three here in the U.S.

Her message is a very simple one:  Amma says, “ My sole mission is to love and serve one and all.”  “Amma’s only wish is that her hands should always be on someone’s shoulder, consoling and caressing them and wiping their tears, even while breathing her last”. And for over thirty years years she has traveled the world and simply hugs anyone and everyone who shows up to see her.

She is known for being pure, true love and though she speaks words and writes books her real message is in the act of love and that love comes through her hugging. She believes in being by doing and the doing is in the hugging. Today alone she will hug ten thousand people. And each one of those ten thousand will feel like she hugged only them. That is her magic, her message, her teachings, and her gift.

OK some  have  now read this far and think I’m a total crackpot and will buy into anything. In case you are wondering I don’t hug trees.  I would be lying however  if I told you I had not traveled the world sampling from the vast buffet of swamis, sages and other forms of spiritual activists.  I will save those experiences for another blog, but suffice to say, I believe in many forms of gurus and spiritual messengers and there is nothing I won’t try once.

I have had every aura read, chakra investigated. I have sought out Sadhus on mountain tops  in  Karnataka and traveled into the countryside of Brazil to have elderly women wearing confirmation dresses and smoking cigars tell my future in guttural shrieks while blowing cigar smoke in my face. I have visited quacks that looked like the real thing and learned transformative life lessons from homeless fruit peddlers in India.

While ever since knowing about her I have wanted to get one of those hugs, I never actually did anything about it. Part of it was truthfully the lines are endless, people camp out overnight, it’s like she’s a new iPhone or something and I hate lines. Though having now been hugged I would stand in line for another Amma hug.

But this time I didn’t have to, my friend Jaswant Lalwani who is not only a well known real estate broker with Corcoran but a cornerstone in the Indian community here in New York emailed me a week ago and said, “Would you like to be hugged by Amma? If so  I can arrange it.”

Within two seconds I was back to him, “Where and when?”

I told Glenn that he couldn’t make a lunch date for today as we were being hugged by Amma at noon. Now  Glenn does not buy in to this stuff the way I do , but when I say we’re getting hugged he shows up on time, takes his shoes off and gets his hug. I know if nothing else he likes the theatre of it all.

This New York Darshan is taking place at the Manhattan City Center.  I will say arriving today in the hundred-degree heat made it feel like I was in India, if it had not been for the American retail reality of 34th Street I might have been able to convince myself.

We met Jaswant and his friend Veena Advani in the lobby at eleven forty-five.   I know this sounds obnoxious and I guess anti-spiritual but Jaswant had arranged VIP hugs. What that means is you don’t have to wait a long time and in my case it meant I could take photos, something that almost no one is allowed to do. I was beyond grateful for this chance.

The  Center was turned into Ammaland, there were stalls set up everywhere selling things (I will get to that later) and there were Indian musicians on the stage behind her and two giant screens so the hundreds of people waiting, sitting, buying, eating, watching, crying, sighing, meditating and just basking in the Ammaness of it all could watch the hugs as they took place.

Jaswant took us  to some reserved chairs close to the stage where we waited our turn.

I could have sat and waited all day, but within about fifteen minutes (all of which I spent sneaking photos as at that point I didn’t know if Jaswant was going to be able to pull off my getting photo privileges) we were ushered up to the stage. Jaswant then informed me  I could take a few photos of each hug.

There was a lady waiting who was a bit peeved when one of Amma’s many helpers pushed us to the front of the queue, though I will say she had a perfect seat right in front of Amma, if I were her I would have stayed all day.

I was the first to go; they have you kneel in front of her in wait while the hugee before you is mid-hug. She has the sweetest kindest face I have ever seen.  If love could be painted I think it would look like her.

There is a lot going on all around her, microphones,cameras, press and entourage but she is seems to be totally focused on whoever she is hugging at the moment and once that person is done, they are given an apple and a Hershey’s kiss– I do hope Hershey is some sort of sponsor for her charities. As soon as the last person stands you are sort of thrust in her arms at which point I instantly broke into tears. She hugs you and murmurs Sanskrit or something in your ear and she keeps hugging and I was weeping and hoping my mascara wasn’t dripping on her white sari, and I was so in the love zone, I can’t describe it. Though at one point I came out of it, as a journalist was asking Amma the meaning of God during my hug. Amma said something and her translator translated but I didn’t listen as I was focusing on getting some mother love from Amma and we all know I can use some.   I think Amma knew that too as she turned away from the journalist and kept hugging me– even Jaswant’s friend said that I got the longest hug she had seen.  I didn’t want it to end but she kept  kept hugging me and I was holding on to her for dear life and then she looked into my eyes and murmured more things I didn’t understand but my guess is they were all good and then she slowly let go, gave me my apple and Hershey’s Kiss and it was time to move on.  I really wanted to jump in her lap and spend the next four years there, but it was Glenn’s turn. And he got a hug, he didn’t get patted and rubbed and whispered to as much as I did but I think Amma intuited  that Glenn’s mother loved him so he didn’t need as much attention, because the most amazing thing happened, she brought me into Glenn’s hug so Glenn and I were getting hugged at the same time.  At that moment so many thoughts were going through my brain: Was she blessing us? Did she see something bad? Something good? Who was going to take the photo since I had the camera and was getting hugged and couldn’t do it?  The only answer I have is no one took the photo.

And then we got up and that was that. We trundled off, I was weeping and I don’t remember what Glenn was doing, he was not crying. We went back to our seats and and sat there metabolizing our hugs.  It took me a minute to catch my breath. She really does infuse you with something.  Even Glenn sat for a few moments. He did check his blackberry, but maybe he thought she had blessed it as it was in his pocket while he was getting his hug.

Of courses these ashrams and programs do not run on love alone so there is the Amma merchandise which if you are a consumer like me and you have just had the hug of your life and are presently floating on this cloud of pure love you are more than willing to purchase some mementos and spread some dollar love back to the organization.

At this point Glenn knew I would be there for awhile which I was (at least an hour) and he went back to the office and I stocked up on Amma photos and CDs and tee-shirts and books and they  even have an iPod station where you can upload Amma onto your pod on the spot. They may be spiritual but like any good spiritual organization they know how to make money.

I just called Glenn and asked him what he thought. His first comment was he got a stain on the knee of his custom-made suit from having to kneel in front of her– not one for the home team there– and then he said he found her to be an “endearing character.”  I found Will Ferrell in Elf to be an endearing character. Amma was mind blowing.  So I guess this is a case of that’s what makes horse racing. But his form of loving me was his showing up in the middle of a workday to do something he clearly doesn’t really feel he needs.  Love comes in many forms. Amma hugs, Glenn shows up.

I on the other hand now have a framed photo of Amma on my desk, a tiny photo in my wallet, five tee shirts with various slogans and am wearing a thin gold bracelet worn by her on my wrist. I love by believing then supporting the cause. Now you might say how do you know she wore it? Well, you don’t – but isn’t that  the purpose of belief?  I believe she did. Amma hugged me and in those moments I felt a sense of love, tranquility and truth. 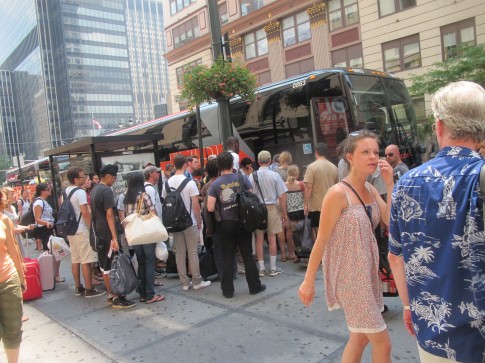 They bus them in. 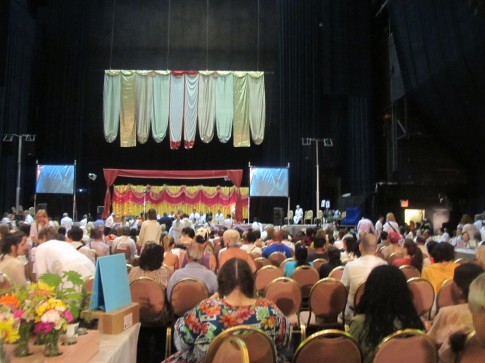 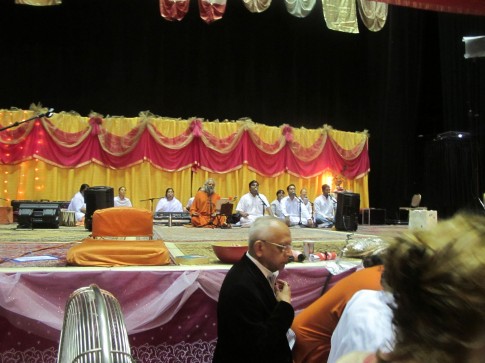 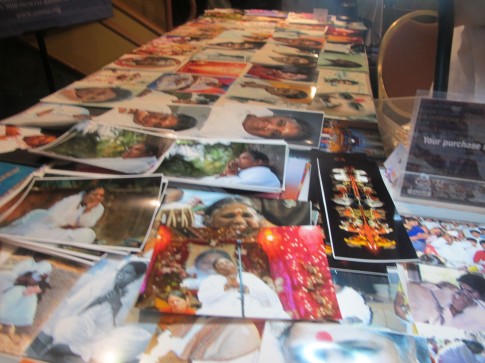 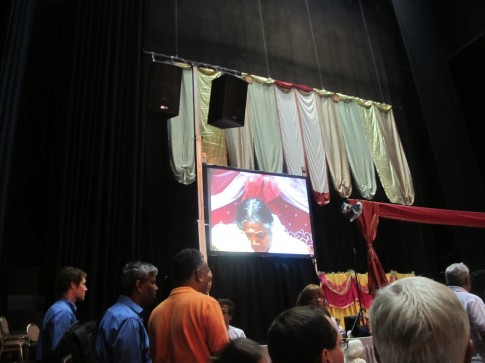 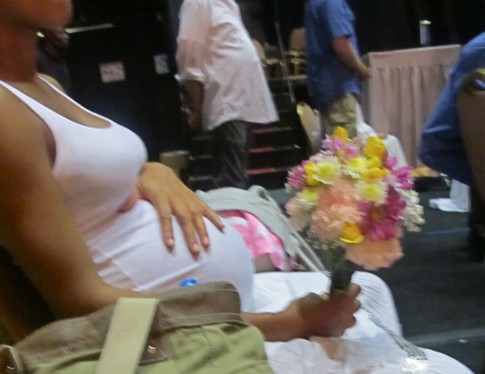 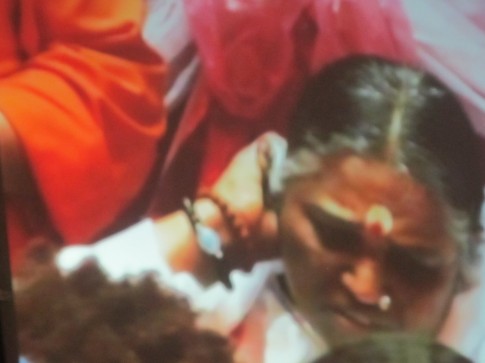 Amma live on the screen. 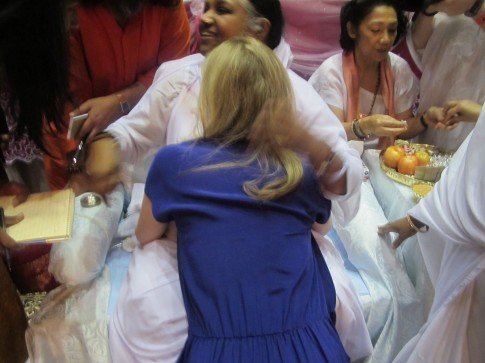 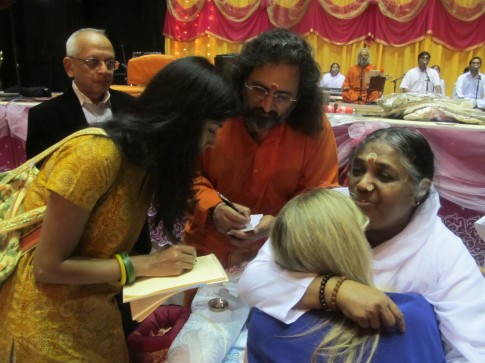 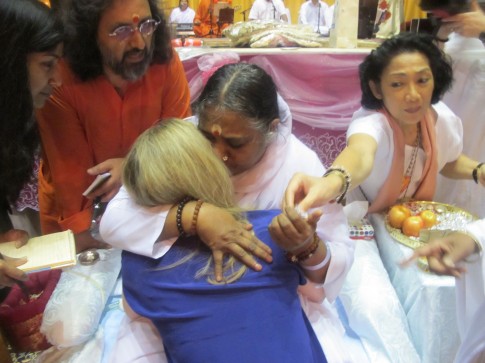 “We are not perfect at birth-

we progress only through action.

If you hold on to a seed, it won’t sprout-

you must plant it!

Instead of waiting for others to improve,

try and improve yourself.” 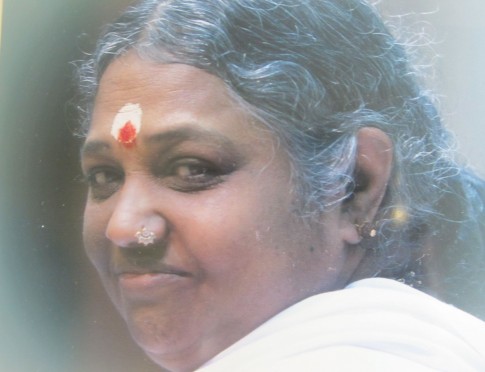