Lately you have heard me refer to the readers of this blog as The Tribe. Now I don’t want you to think that A) I am making politically incorrect references to Native Americans. B) That I am so hoisted on my own petard that I fancy myself a chief. In fact I didn’t even know about Tribes or that the followers of blogs were called Tribes or that I even had a Tribe (though I don’t mind the idea) until I read Seth Godin’s book Tribes after I was told I had to get myself one if I wanted to sell any of my own books.

Lately you have heard me refer to the readers of this blog as The Tribe.  Now I don’t want you to think that A) I am making politically incorrect references to Native Americans, or B) That I am so hoisted on my own petard that I fancy myself a chief. In fact, I didn’t even know about Tribes or that the followers of blogs were called Tribes or that I even had a Tribe (though I don’t mind the idea) until I read Seth Godin’s book Tribes after I was told I had to get myself one if I wanted to sell any of my own books.

Who you might ask is Seth Godin?   Well, according to his website he is “the author of ten books that have been bestsellers around the world and changed the way people think about marketing, change and work. His books have been translated into more than 20 languages, and his e-books are among the most popular ever published. He is responsible for many words in the marketer’s vocabulary, including permission marketing, ideaviruses, purple cows, the dip and sneezers. His irrepressible speaking style and no-holds-barred blog have helped him create a large following around the world.” He also has the most popular marketing blog on the planet.

Am I the only one who is so very late to his table???? I have seen his books in the stores, though never bought one. But then I read Tribes and to sum up  quickly what he says: “Lasting and substantive change can be best effected by a tribe: a group of people connected to each other, to a leader and to an idea. Smart innovators find or assemble a movement of similarly minded individuals and get the tribe excited by a new product, service or message, often via the Internet (consider, for example, the popularity of the Obama campaign, Facebook or Twitter). Tribes, Godin says, can be within or outside a corporation, and almost everyone can be a leader; most are kept from realizing their potential by fear of criticism and fear of being wrong.”

The only place I feel I intersect with this description is my lack of fear of criticism and of being wrong. And, of course,  I have a blog. The message is anyone can have a Tribe if you just put yourself out there. I am wrong all the time, and I am criticized all the time–  according to Godin this is essential to having a successful blog.  The only product I have to market is what I produce through my writing and filmaking and whatever ideas I come up with at the gym or in the bathtub.

But I do have a Tribe and it consists of  all of you who read this on a regular basis.  And I have become friends with people who just appeared in my computer and that is the magic of a Tribe.  And the Tribe members end up becoming somehow connected to each other.  Vanessa ends up knowing Rebecca’s story and Rebecca ends up knowing who Harriet is and by now everyone knows who Penelope is and I have found out a lot more  abut her in the last week and we have a vibrant email connection going on. But she was there and brave enough to confront me and every tribe needs the dissenting voice at times.   This is the foundation of any Tribe, whether you are just sharing ideas and pieces of your life or trying to put an end to global warming.

I would have to say the first loyal member who appeared from nowhere into my life was Larry Enzer, tribe member number one. He showed up with lots of wisdom and quickly became friends with the whole family.

And then Rebecca really came to the front of the room with her heart breaking story and triumph of the human spirit attitude.

There are so many of you, all the Freshman Moms and then the people like Susan Davis my childhood friend who have shot back into my life through the blog.

And there is a new Susan in the tribe. Susan Cohen.  Susan immediately won me over as she exhibited one of the characteristics I admire most – bravery. Susan had read the first article in The New York Post about Lucky Ducks and decided to email me and introduce herself and after complimenting me  (never hurts, but I can take the punches too) she told me about a film she had made and asked if I had any advice. I am actually just going to post a snippet of her email to me, it’s a great lesson in how to get ahead and how tribes are formed, because at the end of the day, it’s all about sharing information, ideas and ideals.

“I also wanted to contact you to share my documentary with you. This is not an attempt at self-promotion or anything like that. After reading about what you have done to not only document your own story but to also raise awareness about the problems with adolescence today, I wanted to share my film, Generation Gluten-Free, with you. I also wanted to see if you have any advice for a young filmmaker, especially one who is also serving as his or her own pr/marketing person. Generation Gluten-Free is the first documentary of its kind in this country. It is the first film to document Celiac Disease and the Celiac Disease community in America and to share stories from this community. The film was released on DVD in January and I have received orders from coast to coast.”

Now this is brave, smart and totally tribal.  We started emailing back and forth. She sent me her film.  We met for coffee– she is adorable, she is 24 and took it upon herself to make a doc about a cause that has affected her, her family and one she believes in. And she followed a rule I really believe in:  “If you don’t ask the answer will always be no.” She put herself out there –  what is the worst thing that could have happened?  I wouldn’t have gotten back to her.  That is not my nature, but she didn’t know that.  I would have said, “Really busy, good luck.” I do that sometimes. The lady who wrote me and asked me to put her kids through college I spammed. But I more than willing to listen to other people’s stories, and if people write out of the blue I write back. It’s the new media, if you don’t you don’t survive. Plus if someone can take the time to write to me I can take the time to get back to them.

And since we are both here in New York we made a plan to meet. So over coffee at Starbucks I simply transmitted to her some of the info that Debbie Stier at Harper Collins had told me. I know nothing about Celiac’s disease and I am just learning how to reach out through the web but what I know I am happy to pass on and I am grateful for those who shine the light for me.  That is the tribal mentality – the way Seth Godin sees it.

Susan has what it takes to lead a tribe. She was frustrated by certain things in the Celiac community. I told her to go out there and tell it like you see it.  You have the cause, you have the film, you have the internet, with a lot of work (and it is a lot of work) and a little patience you will find your own Tribe and the people out there will find you and if they aren’t believers you will convince them to be. I will get your film to some people I know in holistic medicine and to some doctors and do what I can to help you help spread your message. But the best message spreader is the message believer and that is you and now with the internet the world is literally and metaphorically at your fingers. And she has done an amazing job.  I follow her now on Twitter and she’s got tons of ideas and she is not only a member of this Tribe she has her own.

It’s quite fascinating when you think about it: through the most sophisticated technology to ever come along – the internet – we have gone back to the way man built his bonds in the beginning – tribally. We long for connection and because of the nature of the way we live we have lost most of those natural instincts to form communities who interact constantly and help each other and consequently thrive.

So here’s to the tribes and today we honor Susan and hers.

Log on and see what she is up to. 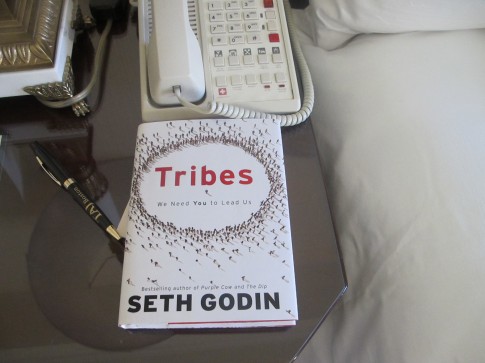