Just walked in the door from taping The Joy Behar Show. I’m having a great time, but I’m really not used to this.

THE TAYLOR AND TRACEY SHOW CONTD

Just walked in the door from taping The Joy Behar Show.

I’m having a great time, but I’m really not used to this.

You know when you’re a writer and you actually get something made and they leave your name on it,  you get like one interview with a lot of other people around and the press either ignores you or asks you one question.

Being the center of attention is tiring!

I want to lie down but I have twenty women coming over in an hour and a half for a bridal shower for our friend Sarah and I fear I will fall asleep.

This morning started with the obligatory black SUV waiting at seven thirty to drive us the ten blocks to FOX.

For those of you who have never done this, this is what happens.

You arrive at whatever studio you are taping or shooting in and they give you a sticker to get in that I refuse to wear cause that’s the kind of person I am – I refuse stickers of any kind on anything.

Then someone nice and friendly, today there was a Ross, a Lacy, a Laurie I think, I have to look at my sheet, and I’m too lazy it’s in the kitchen, anyway, they then take you to the green room that is not always green, but usually is and always has coffee, but the kind I don’t drink.

You then get ushered in to hair and make-up, my favorite part – I love hair and make-up. Except my hair has been done so many times today and has been teased and sprayed to the point I feel like Dolly Parton.

After they cover the bags, everyone is saying, “Can you imagine if you hadn’t done your eyes?”

Yes I can, I would still be in hair and make-up for yesterday’s show.

Alas, thanks to Jon Turk they have less to cover.

Once you are covered and highlighted, tossed and teased, they take you to the set.

This morning we were thrown the curve ball of the mining disaster.

We were sitting on the sofa with the Fox and Friends friends, all miced up and ready to go.

Oh, yeah, you get miced.  Tay and I are used to that after the doc, we wore them for so long, we can put them on ourselves.

The thing about a mic is when you are wearing one –try not to go to the bathroom as people hear everything. So always pee before you get miced.

They were already to start the segment when they suddenly got news that the twenty-four miners had died.

We were unhooked and escorted off the set.

My hurt sunk for the miners and quite frankly I felt like our segment was not an appropriate follow from that lead.

They announced it, cut to a woman who lost her brother and I thought – this is bad, it’s too sad, these people have such problems and now we’re coming on with the clothes on the floor footage and why was she spoiled and why did you spoil her and just not a good scenario.

Luckily, after they cut out of the breaking story there was only ninety seconds left for us. They gave us the choice of coming back tomorrow or taping it and letting it air tomorrow.

I opted for taping then. I didn’t want to drag Taylor back and we would have had a really early call, plus it would have meant going from FOX to INSIDE EDITON with no time to change.

Two of the Fox friends left the set, OK, bad form on my part, I don’t remember anyone’s names.

I could look them up now, but I’m too lazy. They were all lovely, name less  but nice.

One had to get to a radio show, the blonde lady had to go change so she could cook with Patricia Yearwood, is that the right name, Bonnie Yearwood, Tricia Yearwood?   I’m slowly losing my mind and I fear this has just begun as Richard just called me and  The Dr. Phil Show just called him, they want us on, or maybe just me, as get this one of the experts on what to do with kids.

So, we taped our Fox segment with our remaining friend and that was that. It should air tomorrow morning.

I then came back home as Peter Tilden, whose radio show I know from my decades of driving around LA wanted to talk, but I was tossed from that because of the earthquake. I took none of this personally.

Taylor was out the door as he needed a break from this and some time with friends.

I needed my nails done and YIPPEE, got to do it.
But immediately headed over for a really wonderful interview which will run on ABC online with Ann Pleshete Murphy, who watched the film and asked really pertinent questions about parenting.  It was a serious interview that did require more hair and make-up. But I liked it a lot as it got to the core of what the film is really about.

Then back home for another wardrobe change, meet up with Taylor and walk up, I told them to not bother wasting money on a car, as we only had to go to the CNN floor at Time Warner Center.

Lucy and her friend Sophie met us, I was hoping they could be on set like yesterday, but they hung out in the green room with Allison.

OMG – Allison, if I did not have Allison in my life this week I do not know what I would do.

She has been amazing.
She is running the show for me. Thank God.

Joy Behar was great, they are all different and that is what makes it fun – but she was very focused on Taylor and I was thrilled about that. I won’t tell you what she asked as that will ruin the show, but they were to the point and required real answers.

She really wanted to know the mind set of a teen at the stage we filmed the movie.

We left there with Taylor’s feet killing her, heels all day she is not used to.

We took a cab home and I think she is asleep in the next room.

It starts up again tomorrow.

We should be on FOX if there isn’t another disaster.

Peter Tilden is calling at eight fifteen, when I will probably be watching myself on FOX.

That will be weird.

And we hit the road.

Lucy is thrilled as at four-thirty tomorrow we do LX for NBC.

She looked at me and said Mommy you will be sooo famous, it plays in all the taxis.

Poor Tay this hasn’t been hard enough now they will show the clothes footage in cabs.
I’m going to go touch up my make-up for the shower; put my mic on and oh, right, it’s real life.

OK, I’m going to go celebrate Sarah Funke’s upcoming wedding, pink champagne and a dinner made entirely of recipes her friends picked out. It’s going to be fun.

But Lucy said she would have the TV on in her room. 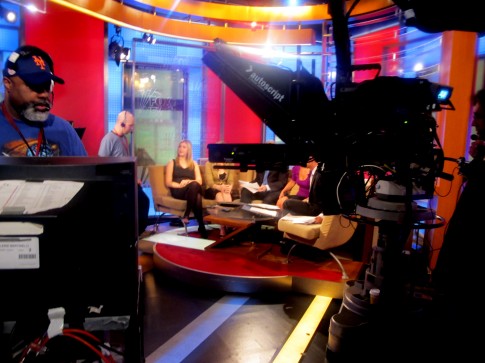 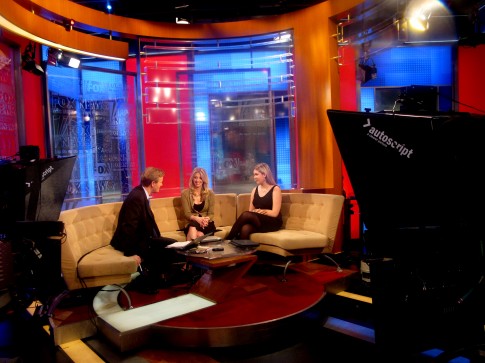 ON THE SET TAPING WITH OUR FRIEND 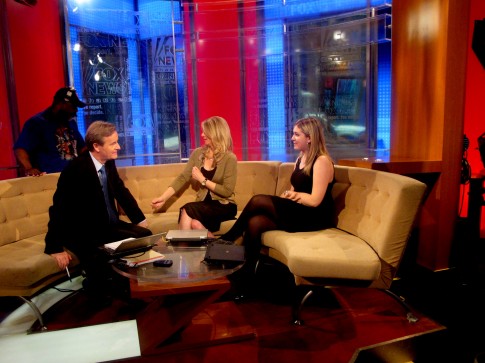 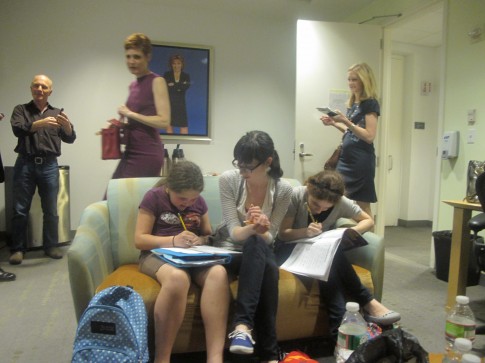 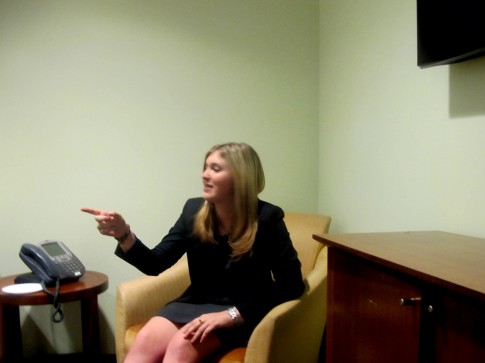