Hollywood scriptwriter Tracy Jackson takes spoilt daughter on a reality check trip to Dharavi, makes a documentary of her journey. 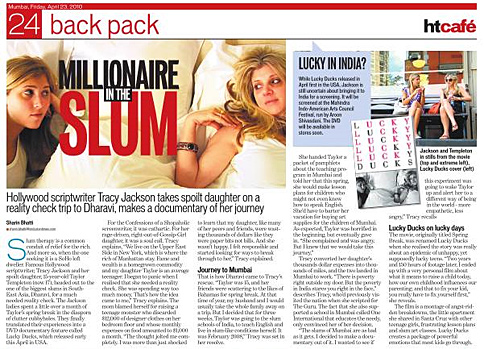 Hollywood scriptwriter Tracy Jackson takes spoilt daughter on a reality check trip to Dharavi, makes a documentary of her journey.

Slum therapy is a common conduit of relief for the rich. And more so, when the one seeking it is a SoHo loft dweller. Famous Hollywood scriptwriter, Tracy Jackson and her spoilt daughter, 15-year-old Taylor Templeton (now 17), headed out to the one of the biggest slums in South- East Asia, Dharavi, for a much needed reality check. The Jackson ladies spent a little over a month of Taylor’s spring break in the diaspora of clutter cubbyholes. They finally translated their experiences into a DVD documentary feature called Lucky Ducks, which released early this April in USA.

For the Confessions of a Shopaholic screenwriter, it was cathartic. For her rage-driven, right-out-of-Gossip-Girl daughter, it was a soul call. Tracy explains, “We live on the Upper East Side in New York, which is where the rich of Manhattan stay. Fame and wealth is a homegrown commodity and my daughter Taylor is an average teenager. I began to panic when I realised that she needed a reality check. She was spending way too much money. That’s how the idea came to me,” Tracy explains. The mom blamed herself for raising a teenage monster who discarded $12,000 of designer clothes on her bedroom floor and whose monthly expenses on food amounted to $1,000 a month. “The thought jolted me completely. I was more than just shocked to learn that my daughter, like many of her peers and friends, were wasting thousands of dollars like they were paper bits not bills. And she wasn’t happy. I felt responsible and started looking for ways to break through to her,” Tracy explained.

That is how Dharavi came to Tracy’s rescue. “Taylor was 15, and her friends were scattering to the likes of Bahamas for spring break. At that time of year, my husband and I would usually take the whole family away on a trip. But I decided that for three weeks, Taylor was going to the slum schools of India, to teach English and live in slum-like conditions herself. It was February 2008,” Tracy was set in her resolve. She handed Taylor a packet of pamphlets about the teaching program in Mumbai and told her that this spring, she would make lesson plans for children who might not even know how to speak English. She’d have to barter her vacation for buying art supplies for the children of Mumbai.

As expected, Taylor was horrified in the beginning, but eventually gave in. “She complained and was angry. But I knew that we would take this journey,” Tracy converted her daughter’s thousands dollar expenses into thousands of miles, and the two landed in Mumbai to work. “There is poverty right outside my door. But the poverty in India stares you right in the face,” describes Tracy, who’d previously visited the nation when she scripted for The Guru. The fact that she also supported a school in Mumbai called One International that educates the needy, only convinced her of her decision. “The slums of Mumbai are as bad as it gets. I decided to make a documentary out of it. I wanted to see if this experiment was going to wake Taylor up and alert her to a different way of being in the world – more empathetic, less angry,” Tracy recalls

The movie, originally titled Spring Break, was renamed Lucky Ducks when she realised the story was really about an epidemic of unhappy, yet supposedly lucky teens. “Two years and 150 hours of footage later, I ended up with a very personal film about what it means to raise a child today, how our own childhood influences our parenting; and that to fix your kid, you really have to fix yourself first,”she reveals. The film is a montage of angst-ridden breakdowns, the little apartment she shared in Santa Cruz with other teenage girls, frustrating lesson plans and slum art classes. Lucky Ducks creates a package of powerful emotions that most kids go through.