Today I have been so full of glib and glam and bon mot’s batting my still racoony eyes around Bergdorf’ s looking for a dress to wear to the party tonight and then I came home to an email telling me one of my oldest friends had died this morning. 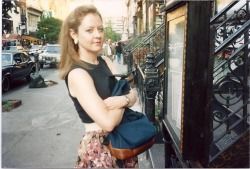 Today I have been so full of glib and glam and bon mots, batting my still racoony eyes around Bergdorf’s looking for a dress to wear to the party tonight and then I came home to an email telling me one of my oldest friends had died this morning.

Not as old as Blake, but close,  we go back thirty years.

She was a bridesmaid in my first marriage, out of six the only one I was still speaking to.

See the thing is I put off something and I’m sitting here just hating myself.

There was a period when we were together almost daily. Then a decade when we lived three thousand miles away. Then five –six years ago I saw a lot of her as she ran the school where I teach.

But then she moved away and she didn’t leave much info behind.

Barnetta had sort of disappeared and we really didn’t know for a while what had happened. And you know the way it is in life you get caught up in all the stuff of the moment that is so pressing – oh wow – what was all that pressing stuff I had to do?

Anyway, earlier in the year I found out she was in a home up in Rochester.

She had suffered her entire life from diabetes. She was always brave and never complained and you never would have known she was ever ill at all.

But it turned out she had developed early, so early, way early,  decades early diabetes induced dementia.

Her loyal friend and partner David was taking care of her.  He had found this home for her and she was happy he said.

It was pricey and she couldn’t work obviously so he was asking friends to chip in if they could.  We did. I was planning to send another check next week; it was marked in my agenda. “Send Barnetta check”

I posted it on FACEBOOK way back and sweet Matt Mosby said he would send something.

I was going up to see her. I don’t think many had.  People are like that you know.  Busy, busy, doing, doing, pressing things.

But by the time I found out it was close to winter and I had all these pressing things, and to be honest I didn’t want to get stuck in bad weather or snowed in.  So I told David I would wait until the weather got better and I would fly up and spend the night in Rochester and go and see her.

He said some days she knew people some days she didn’t. I didn’t really care.  I just would have gone and sat and held her hand and reminded her of all the good times we had, or perhaps I would have just been reminding myself. The times would have been sent out in the ether and  it didn’t matter to me if she knew me, at least I would have seen her.

I told Glenn literally two days ago as soon as we get back from Spring Break I’m going up to Rochester.  He even said I could fly back the same night, it was an easy trip as long as it’s not snowing.

She died this morning. I don’t know of what. I guess the diabetes.

David had said she could live for years. I never knew there was any sort of time limit at all.

The talk was always how to keep her in the home for as long as possible, that was the goal.

She was funny, she loved life and theatre and teaching and directing. She had many talents but I think directing was her favorite activity. She was a take charge, you could count on her for anything kind of gal.

She was a gal in the real sense of the word. She wasn’t curly, girly, girl yet she could be almost kittenish if she wanted though it was more of a role than her character.

She would wear hair bows and hiking boots. She dressed to say I get the joke, do you?

Her character was no-nonsense; afraid of nothing, if it had to get done she would do it no matter what it was.

She was the first person I knew to live in Brooklyn. This was thirty years ago mind you.

She used to head home to Brooklyn and I thought that was the bravest thing.

She loved to laugh and go to the theatre.

We used to eat veggie plates at DOJO in the East Village. It was just a  given.

Like that great scene between Holly Hunter and James Brooks in BROADCAST NEWS, “I’ll meet you at the place, by the corner near the thing.”

I think in fact if someone were to play Barnetta it would be Holly Hunter.

She would quite like that. She was from Tennessee.  When she got tired or had an extra glass of wine the roots came out in her twang.

I think one of the best things you can say about someone in life is they never let you down.

I can say that about her.

I think in our friendship, I hope at least, she would have been able to say the same thing.

I feel like not getting up there before Spring I did.

Her partner just emailed me and said I didn’t. It was very fast, so fast there was no time to tell anyone.

I can’t even cry because of my eyes, so I just keep typing.

That would make Barnetta laugh so hard, she would tease me mercilessly.  “I die and you can’t cry because you just had your eyes done, so you Tracey.”

Selfishly, I hope it’s not for some time, I have a lot of living to do and children to raise; but if the universe is the way we like to think it is, when the time comes,  I’ll meet ya there Barnetta.

In loving memory of Barnetta Carter

THE GIFT OF MADELINE